Let me suck your toes

Winter is a sad time for a man with a foot fetish. 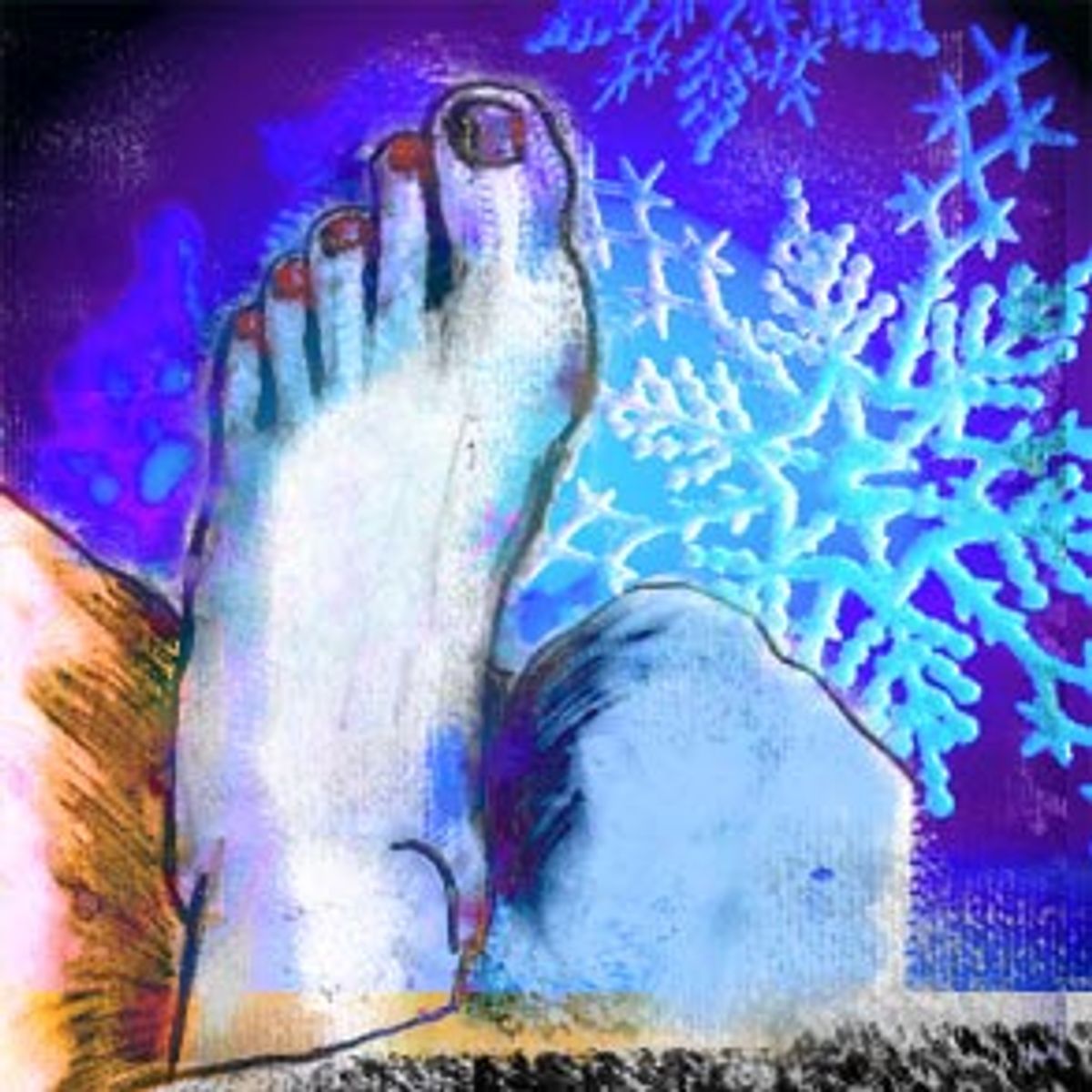 I am dying. Leaves let go their trees and spin to the ground, cover it, close the casket on the last blades of green grass.

Likewise, boots lace up and cover what was once displayed in sandals, like nude Venus in a seashell, the glorious female foot.

I am dying because my sexual perversion -- my foot fetish -- must return to the closet as winter approaches, covers, kills.

This late autumn day, she is an endangered species, the female foot. She is the snow leopard, prancing for the hills. She is arched, a frightened cat, and I am the hunter. If I catch her hiding in her loafer cave, I will pet her, hug her, lick her. Like a cat deserves.

This day, when heavy shoes slant thickly against winter's impending edge, I am repressed squared. I walk down the street and I no longer receive my fix of female feet in skimpy straps. I see binding boots, clodhoppers, socks, stockings.

I resort to memories of the bare leopards I have encountered, anonymous flashes: crossed bare legs and, further down, the idle flipping of a shoe on and off a tan foot; a brown cat dangling flirtatiously out of a car's passenger window on the highway; droplets of water drying on the skin of two feet resting at the end of a pool lounge chair.

But memories never help. I am locked in a cabin. The whistle of my kettle is shrilling. Take me off this fire, it says; give me relief before I evaporate into the air. They will find me at first melt.

In short, I think there's something wrong with me.

I would ask for help, but who can you talk to about such things? Shall I start sucking my wife's toes after five years of happy marriage? She has deliciously formed feet -- I wouldn't have married her otherwise -- but she wouldn't understand; no, no, she still talks about the college twerp who tried to suck her lower digits, and the mouthful he got instead.

Oh, my lovely, caring wife knows I like female feet but denies I have a fetish. "You're normal," she says. Inside, I howl.

In the dim moonlight, beneath warm covers, she asks, "What do you want, what do you really, really want; anything, I will do anything to/for you." But she has no idea what she's asking. I've heard variations of this before. People think they might understand. They draw you in. Tell me, they say, I'd really like to know.

But a foot fetish is King Kong. People misunderstand it, run from it, try to kill it. A foot fetish is a scarlet letter that is but one better than the letter assigned to gerbils in the ass. Lives combust when secrets like this are divulged. The moment you tell them the truth -- how when you see a female foot of the correct size, color, cleanliness and proportion, you feel a warm tug in places beneath your clothing, your breath escapes like the steam from that kettle, you want to caterwaul like John, Paul, George and Ringo at high harmony -- they point and betray like zealots of Big Brother (not the TV show).

Like that time on my school bus in sixth grade. My friend and I were discussing the supple virtues of one 11-year-old school starlet. She had no breasts and there was only a flicker of the tramp she would become.

I ventured to unknown territory for a sixth-grader: "She has sexy feet," I told my bus-riding friend. He grasped the concept immediately, bellowing to the entire bus, "He has a foot fetish!"

"A what?" I stammered, but it was past midnight, the glass slipper crushed. I was Charlie Brown, squared and perverted. My ears roared with blood, caught in the maelstrom of open-mouthed laughs of cruel fellow students, the cruel world gaping at me, prodding me, humiliating me.

Note to self: Don't reveal your foot fetish to anyone.

Of course, now there's the Internet, its wild and wacky sex play making my subtle admiration of the foot seem as innocent as two dogs romping in an evergreen field. (My former bus-riding friend, no doubt, waits until his wife is fast asleep before assailing the Web of sex with a clenched fist and a funny look on his face, but I digress.)

The Web is our alternate universe, the one where God forgot to bless us with repression. It is also the home of the rather conservative American Foot Fetish Society, as well as an entire kingdom of foot fetish sites. AFFS is run by Bill V. He, like me, remains anonymous in the face of a potential foot fetish scandal not unlike my bus-riding incident. I try to reach him. I have questions:

Why do we like the female foot? Are we genetic defects? Why not lust for the traditional hips and boobs, two body parts that are much more likely to ensure the survival of our genes in generations that follow?

I get no answers.

Here's a genetic fact, discovered by my own unwavering research: Latin American women have consistently sexy feet. Check them out next time you watch a Ricky Martin video. Inside their pumps, you'll find caramel machiatto, size seven-and-a-half frightened cats. You can have your Brazilian wax. Give me the lubed foot of a Venezuelan chica and I'll make a video for you.

I was lying on the rusty shag carpet of our living room, Ponch (Erik Estrada) filling the screen with his manly teeth. He was telling Jon (Larry Wilcox) about his new girlfriend, whom no one but Ponch had seen.

"She has the sexiest feet," Ponch said through his pearly whites.

I laughed the laugh of a boy. Silly, comedic, strange Ponch!

Then Ponch's girl showed up. The camera teased us with a close shot of her baby doll face framed by wild blond hair. It panned down to reveal vanilla nut, nail-polished felines, their pale arches asking to be arced to the ceiling and licked.

I felt something move within my prepubescent world. I turned to my Farrah Fawcett posters. Did she have sexy feet? I looked at the feet of my many 9-year-old girlfriends. Did they?

In college, I dated a girl because she had Revlon-tipped cougars, the sexiest feet I had ever seen (before I met my wife, of course). I told her so on our first date; a little too much drink had taken the edge off and I just wanted to get things out in the open for once.

She accepted, shyly, then ended up wielding her feet as sexual weapons, posing them just so on my lap or nudging me, shoeless, beneath her parents' dinner table. We stayed together three years too long, and at least one reason for this was the fact that I was hesitant to leave someone who had teased my sexual deviancy.

Ironically, at the same time that I was dating her, our university library was under assault from a mystery man known only as the Shoe Soiler. He was repressed squared and tenfolded. He would hide between bookshelves, watching girls study, and when they get up to retrieve a new book, padding in their socks or bare feet and leaving their shoes behind, he would -- presumably -- work fast, head to their cubby, latch a shoe onto his erect glue gun and leave a sample of his DNA. They'd find out later, as they were readying to leave. The college paper ran front-page headlines, but the Shoe Soiler was never caught.

Part of me admires and understands the gusto with which the Shoe Soiler shed repression of his perverted needs. Meanwhile, I lust quietly for the curve, the nail-polished toe, the exposed heel languidly flip-flopping for blocks on end, the toe rings, oh, the toe rings, just inviting an extended stare.

But winter approaches. Like the occasional blade of green grass, a naked foot will stretch out before me like a kitten. But most have taken flight with the birds, replaced by hiking boots and thick socks, and soon by snow boots, ice skates, thicker socks. Foils, all of them.

The wife asks me what I really, really want. At the mall, we walk into a shoe store with an Italian name. I pretend to browse while catching glances of nude feet slipping in and out, in and out, of leather and heel. My kettle whistle shrills.

I sigh too often. I stare blankly at my computer at work, knowing the foot fetish kingdom is just a deviant mouse click away.

I die, slowly, hoping to last until spring, when bare feet will once again romp through the evergreen field.

Liam Tell is a pen name.