Stick a fork in him -- Gore's done

The battles continue, but legal experts say the vice president's court challenges are all but insurmountable. 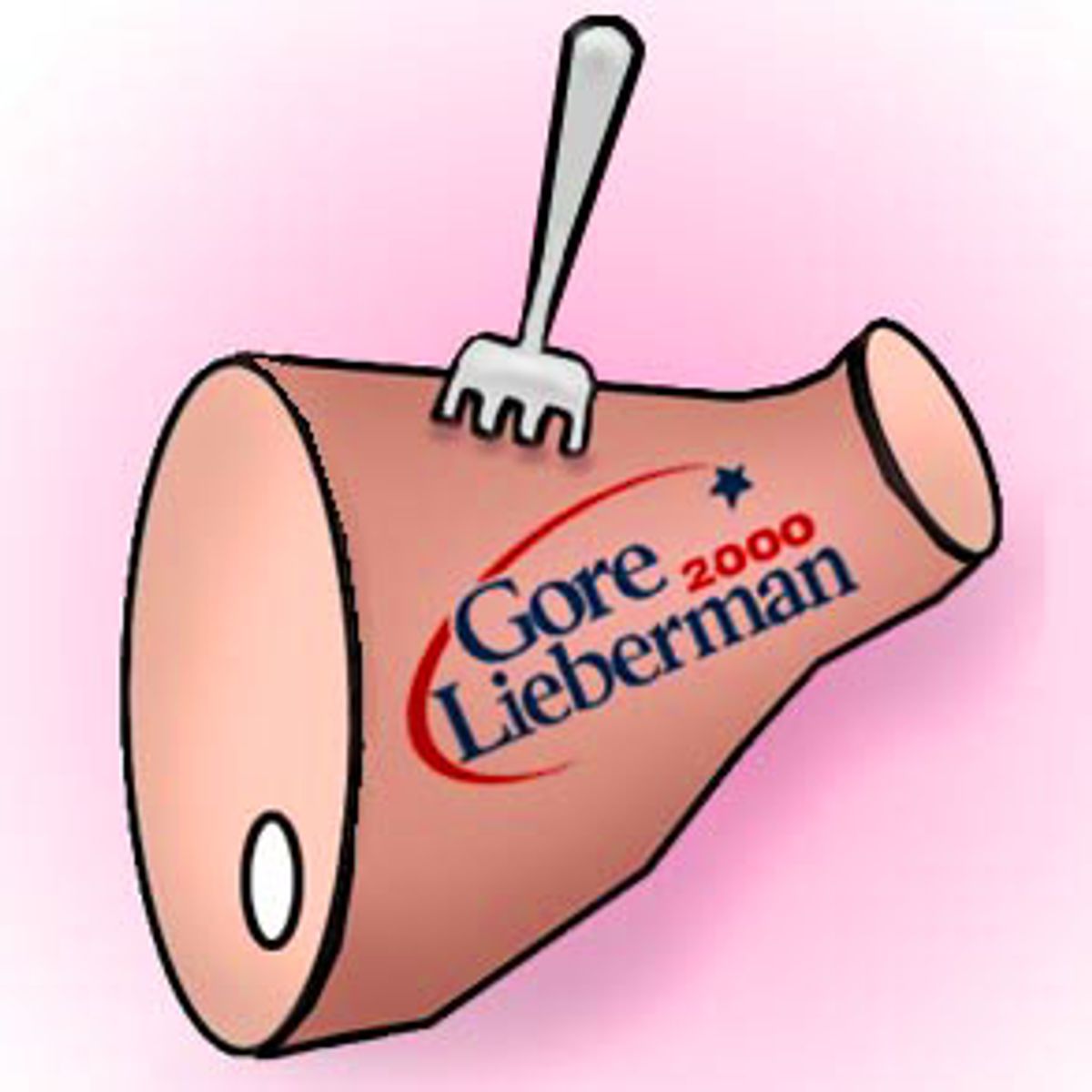 Gov. George W. Bush pulls up to Texas state Capitol in Austin on Tuesday in his SUV and is asked if he'd like to see Vice President Al Gore concede by the end of the week.

"That's a decision the vice president has to make," Bush says. "It's a difficult decision, of course. I can understand, I can understand what he may be going through ... It was one month from today that the people actually showed up and started to vote. Here we stand. Here I stand without a clear verdict, although I must say that I'm very encouraged."

Bush should be encouraged. He should pack up his down pillow (his "pilly"), put Spot, Ernie and India in their doggy and kitty carry-ons, fill out his change-of-address card and load up the truck.

Not only was Gore's motion to contest the certified election results resoundingly -- embarrassingly -- shot down Monday by Circuit Judge N. Sanders Sauls, but Gore's fate now rests at the doorstep of the Florida Supreme Court. The court will hear his arguments for appealing Sauls' decision Thursday, and legal experts say Gore's chances in Tallahassee now are about as remote as Warren Christopher winning an FSU wet T-shirt contest.

"I think he has little hope, I'd put it that way," says Joseph Little, a Florida constitutional law professor at the University of Florida College of Law.

Gore's first enemy is time. The Tallahassee clock is deafening. Were the court to overturn Sauls' decision -- and we'll get to that remotest of possibilities in a second -- the task of hand recounting the 13,000 disputed ballots by Tuesday -- the deadline by which Florida's electors are to be named -- seems a near impossibility.

"They'd have to appoint impartial masters" to count the votes, says Steven Uhlfelder, a Tallahassee attorney and former chairman of the American Bar Association's election law committee. "They'd have to determine what standards to apply when counting the votes. Then they'd have to get to the physical task of counting. All by Tuesday."

Uhlfelder chuckles. "I mean, they've got calendars at the Supreme Court," he says.

Perhaps an even greater task might be convincing the court's seven justices that they should overrule Sauls, whose decision was rendered in black-and-white certitude: "There is no credible statistical evidence and no other competent substantial evidence to establish by a preponderance a reasonable probability that the results of the statewide election in the state of Florida would be different from the result which has been certified."

A decision that firm is unlikely to be overturned. "I think it's most likely that the Florida Supreme Court will affirm Judge Sauls' ruling, and if it does that's pretty much the end of the ballgame," says Little -- who a few weeks ago, along with Kogan, correctly predicted that the Supreme Court would enthusiastically take up the Gore case, and rule in Gore's favor.

Little says today that he'd "be amazed" if the court ruled in favor of counting all the disputed ballots by Tuesday.

"This particular finding by this judge as to the facts that took place at the trial comes to the court with a presumption of being correct," says Kogan. "When the court gets it they are required to think it's correct, unless there is the suggestion that the judge greatly abused his discretion" -- that "he's off the wall" or that he "applied the wrong law or misapplied the law."

"Basically, that makes it very difficult for the Gore folks to win this," Kogan says, predicting that the court "may even decide that it's not going to take up jurisdiction in this matter."

Adds another University of Florida College of Law professor, Nat Stern, "Appellate courts generally defer to the factual determinations of trial courts. And Judge Sauls heard extensive testimony about the efficacy of these machines and based his assessment on that live evidence ... The other consideration is the legal standard, and it is a fair reading of the contest provisions that a substantial burden is placed on the contestant" -- a burden that Gore's legal team didn't meet.

Another Tallahassee legal observer, who declined to be identified, points out that the seven members of the high court, all of whom were appointed by Democratic governors, "already fell on their sword [for Gore] once. Palm Beach couldn't get the recount done -- they took Thanksgiving off! -- Dade decided not to do it and Broward counted every dimple in the world." And still Gore didn't get the votes.

Adds the observer, the judges "don't live in a vacuum." They have an appropriations bill coming up in the legislature, and they have to live in Tallahassee long after Dec. 12, the observer says.

The most the court will do, Little predicts, is hear the Gore legal team's argument on whether Sauls applied the proper standard when deciding whether they needed to show that the election would have been overturned, as opposed to that it could have been.

"I do think that the Gore team's position that Judge Sauls might not have applied exactly the right standard has some credibility," Little says, "but I don't believe it makes much difference. Because as I read his opinion, if the court remanded it to him with what it might rule would be the right standard ... I really don't think his opinion would change. It would be a temporary shot in the arm for Gore, but then Sauls would come back and say, 'OK, I've applied the standard the Supreme Court told me to, and it's the same result.'"

Even in a best-case scenario, Bush has insurance policy after insurance policy. "If this thing gets reversed [by the Supreme Court], the Legislature" -- both houses of which are dominated by Republicans -- "will be in full gear by the weekend" preparing to appoint the electors itself, Uhlfelder says. "The problem for Gore is that there are too many backstops for Governor Bush. There's the backstop of time, the backstop of the Legislature, the 11th Circuit Court of Appeals is hearing arguments as we speak."

And what of the so-called wild card, the Seminole County suit against Republican Elections Supervisor Sandy Goard, who let GOP operatives camp out in her office and, perhaps unlawfully and certainly unfairly, fill out missing voter ID numbers on thousands of Republican Party-printed absentee ballot applications?

In that case, as well as a similar suit from Martin County, it is certainly possible that Judge Nikki Clark could toss out all the absentee ballots from the Republican-leaning counties, thus delivering the election to Gore. Gore himself mentioned the cases in an impromptu press conference Tuesday afternoon; and the evidence against Goard seems pretty daunting.

Should he hold out hope?

Stern sees possible "impermissible, uneven treatment" in the GOP elections supervisors' behavior. But the problem for Gore is what to do about it. "It's an uphill battle on the remedy, not on the violation. The court would be forced to throw out all the ballots including those validly applied for. And I doubt very seriously the court would throw out the baby with the bathwater."

Throwing out thousands of absentee ballots because of an alleged violation in the absentee ballot application stage -- the solution Democrat plaintiffs are seeking -- is unprecedented. "The remedy for the unequal treatment [of the Democrats and Independents allegedly not given the same opportunity by Goard] is not to negate all the absentee ballots, it's to give Democrats and Independents the same opportunity to vote. But it's too late for that now," says Stern. "The daunting obstacle for Gore for so many of these proceedings is the remedy. I mean, look at the butterfly ballots -- there's a strong argument that the format of those ballots violated the law. But there's really nothing to be done about it."

Even if Clark were to toss out the ballots, many experts feel that the Florida Supreme Court might overrule her decision, having declared so heartily last week in favor of bending over backwards to preserve the right to vote. And no one has alleged that anyone in Seminole or Martin counties voted incorrectly, or that there was voter fraud. After all, the questionable behavior took place in the absentee ballot application process, not in the voting itself.

Concludes Uhlfelder: "It seems like Vice President Gore's surrounded. It's almost like Custer's last stand. I feel sorry for him. Almost."