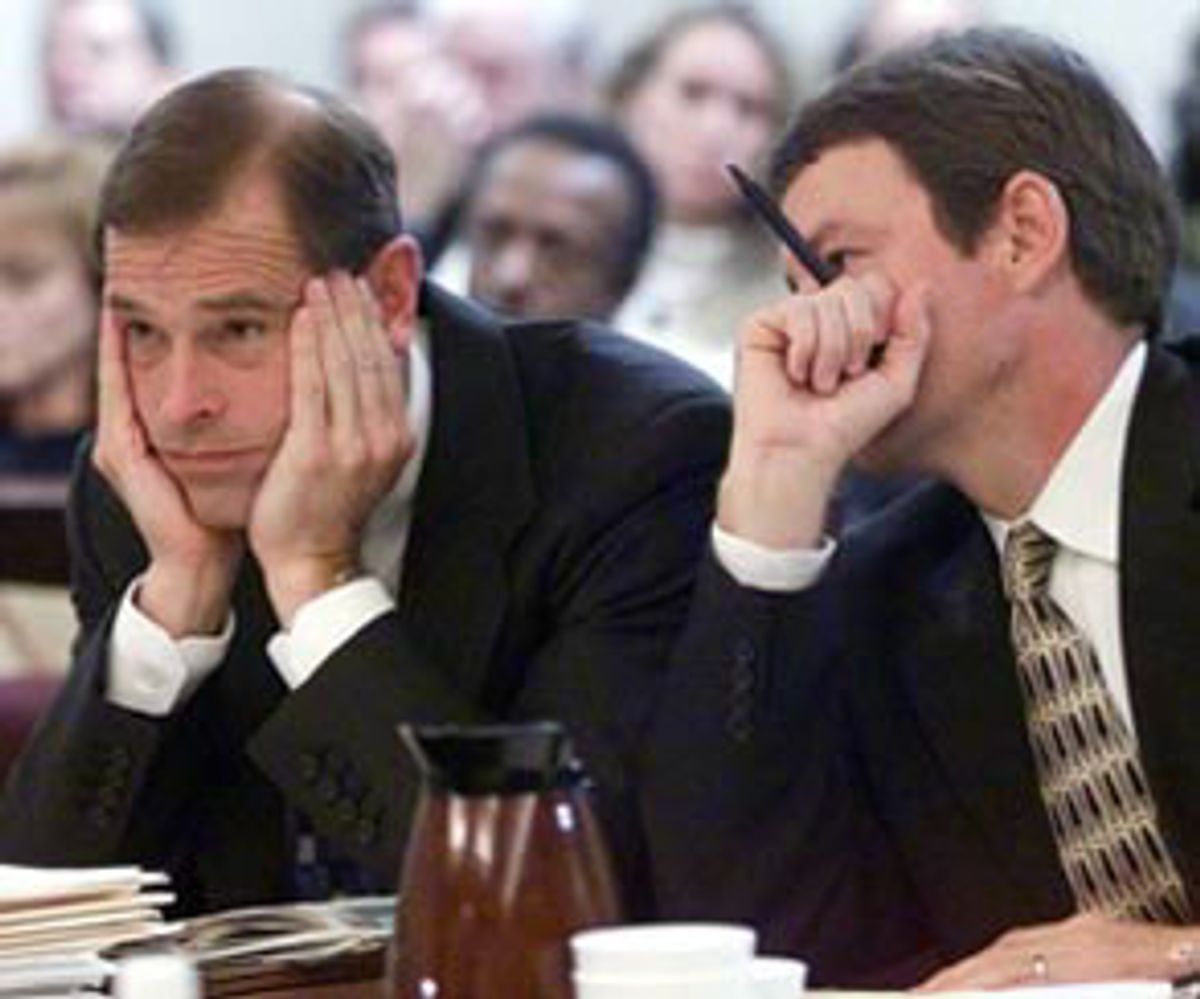 In an effort to fast-track the selection of electors in Florida, the state's Republican-led Legislature will hold a special session on Friday at noon. Final arguments are scheduled for 1 p.m. Thursday in the Seminole County absentee ballot case.

State Senate President John McKay appeared before reporters Wednesday. Wearing his spectacles halfway down his nose -- as Gov. Jeb Bush is prone to do -- he said, "I believe that the electors should be based upon the vote totals that were available on Nov. 14. And, equally important, on the laws that were in place at the date of the election on Nov. 7." He described the certified Nov. 14 vote as the "least tainted of all," suggesting that the Legislature's likely move to choose electors would swing toward Gov. George W. Bush, making it even harder for Vice President Al Gore to overcome the Texas governor's certified Florida win.

Immediately after McKay's announcement, State Rep. Lois Frankel, D-West Palm Beach, described the decision as a "sad day" for the Florida Legislature and the "ultimate partisan act." The weary-looking Democrat added, "The only thing missing was a postmark from Austin, Texas."

The news had Democrats biting their nails. Only a few hours earlier, a decision by the 11th Circuit Court of Appeals in Atlanta to reject a Bush request to throw out the hand recounts in three counties that narrowed the Bush lead from 930 to 537 votes fueled new hope for Gore, however diminutive that optimism may have been.

The federal court decision was a much-needed victory for the Gore legal team, which was dealt a serious whammy by Leon County Circuit Court Judge N. Sanders Sauls on Monday.

Meanwhile, Judge Nikki Clark heard arguments in a case brought by a Seminole County Democrat aiming to toss out approximately 15,000 absentee votes. The lawsuit, which Gore is watching closely, charges that Republican volunteers were given an improper opportunity to correct thousands of absentee-ballot requests that would otherwise have been tossed out.

In one of the day's most-charged moments, Democratic attorneys read aloud testimony from Sandra Goard, Seminole County's 23-year elections supervisor. In her testimony, Goard admitted that she permitted two Republican Party representatives , including the party's regional director, Michael Leach, to add missing voter identification numbers to about 2,000 absentee ballot applications filed by GOP voters. Goard also acknowledged that Florida law did not provide her with permission to undertake such an action and that she had not provided Democrats with the same opportunity.

In opening arguments in the case, the Democrat's attorney, Gerald Richman, argued, "I don't think there's any question the law was violated in this case," referring to the actions of Goard and the Republican officials.

Republican attorney Daryl Bristow, meanwhile, countered: "This case is being brought for one reason, to change the outcome of the election, to change the will of the people in Seminole County.''

Gore is not a party to either suit, and his attorneys and Democratic supporters have been adamant that the vice president's battle will end when the Florida Supreme Court acts on his election challenge appeal. Yet the vice president spoke in great detail about the absentee-ballot cases during a Tuesday afternoon press conference, and said that "more than enough votes were potentially taken away from the Democrats" in Seminole and Martin counties to make him the winner of Florida.

Meanwhile, the day's sole sideshow came earlier Wednesday afternoon, when hundreds gathered at a pro-Gore rally on the steps of the state capitol in Tallahassee to hear speeches by the Rev. Jesse Jackson, first lady of choice Patricia Ireland and AFL-CIO bigwig John Sweeney.

Though Jackson's allegations of the disfranchisement of black voters in the state do have a ring of truth, his partisan rhetoric went a long way toward undermining the cause he was fighting for. In a short speech, he compared the Florida vote count to a hypothetical election involving a certain deposed Yugoslav leader.

"If we were in Yugoslavia and Milosevic was losing a race," Jackson told the demonstrators, "there's one contested state, and his brother, the governor, was over that state, and the machinery of state broke down and he became the winner by virtue of the breakdown of that machinery, we would say that race does not pass the smell test of transparency. And that's what has happened in Florida. Mr. Bush and Mrs. Harris are very much involved in the chaos in this state and they cannot shift it, even to Seminole. It's all about Tallahassee."

A day earlier, Jackson's lawyers and Rep. Corrine Brown, D-Fla., filed suit in Duval County, where 27,000 ballots were discarded -- as many as 9,000 of them from largely African-American precincts where Gore received as much as 90 percent of the vote. Jackson and his Rainbow/PUSH Coalition is demanding that the ballots be transported to Tallahassee and immediately hand recounted.

In the meantime, Bush is working his way back to the nice-guy image he put together during the campaign. In an interview on CBS's "60 Minutes II," Bush said that he doesn't want to be called "president-elect" until Gore concedes, and that he doesn't think his opponent is a "sore loser." "I can understand his anguish, I can understand the emotions involved," Bush said, "but he's pressing on, and until the election is final, I would hope the people would call me Governor Bush."

Bush may not want the title yet, but he's still more than confident about being the ultimate victor. When correspondent Scott Pelley asked Bush whether he could imagine losing after all this time, Bush responded, "Not really."

The Republican also discussed the infamous Election Night phone call in which Gore rescinded his concession. Bush acknowledged being surprised and disappointed, and said that those feelings naturally affected his tone during the conversation. "I was fairly abrupt. I was somewhat taken aback," Bush said. "He did what he thought he had to do."

But Bush denied that he was "snippy" on the phone, saying, "We don't use that word here too often down here in Texas. So I'm not exactly sure what that means, but if he meant abrupt, I was abrupt."

While Bush is clearly preparing for a final resolution, Gore is still ready to fight. "I don't feel anything but optimistic," Gore told reporters Tuesday, saying that his chances to win are still 50-50. Though transition meetings were conspicuously absent from his calendar, the vice president seemed prepared to keep fighting, denying that he'd been dealt any major blows by recent court decisions. "I don't want to accept the premise that they've all been negative," Gore said.

The vice president wouldn't discuss a concession and wouldn't set a firm date as to when his legal fight will end.

His tone was in marked contrast to that of many of his surrogates. Prominent Democrats, including Gore's running mate, Sen. Joe Lieberman, have hinted that the vice president's election challenge is likely in its last week. Even Gore's top lawyer, David Boies, says that the Democrats' appeal to the Florida Supreme Court will be the end of the road.

Sauls denied every claim raised by Gore's attorneys, citing "no credible statistical evidence" that the vice president would win the Florida election if approximately 14,000 ballots in Miami-Dade and Palm Beach counties were recounted by hand.