With all the negative buzz in the media and from the Bush campaign, you'd have thought we were headed straight into another Great Depression. Not so fast. 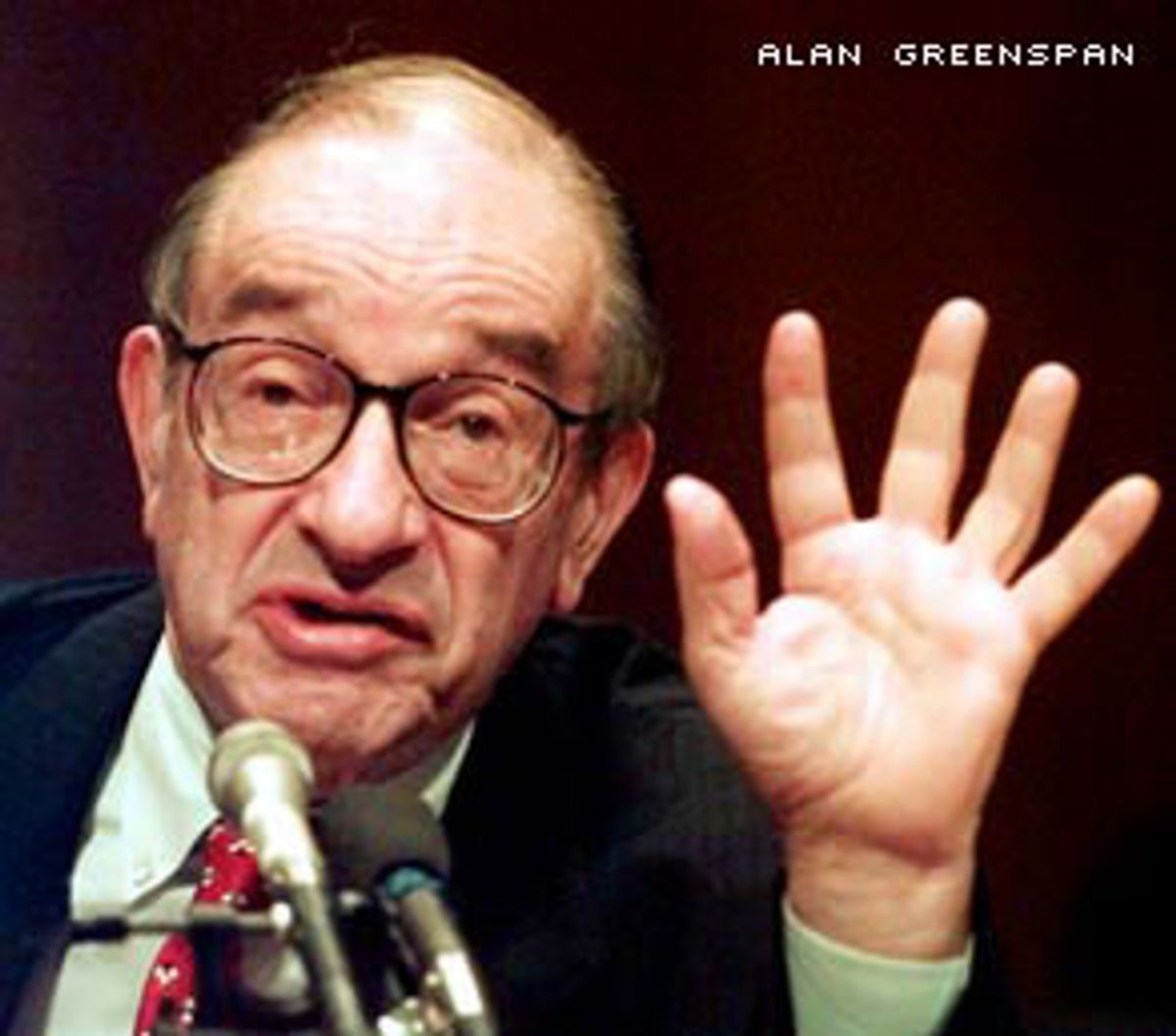 Before Tuesday's dramatic stock-market surge, a gloomy pall had descended on the pundits and politicians who follow the U.S. economy. In recent weeks, they were handed lots of grist for their mills. On NBC's "Meet the Press" Sunday, no less than George W. Bush's running mate Dick Cheney ominously warned that "we may well be on the front edge of a recession here."

Indeed, there are signs that the economy is cooling off a bit. Until posting its largest gain ever on Tuesday, the tech-heavy NASDAQ was off by half. Big Business - as in those old economy companies that actually make something - is cutting back on purchases of new machinery like (Woe is Silicon Valley!) computers. Auto sales are down. And consumers say they feel less confident about next year, even as they spend a bit more this holiday season than they did a year ago.

But the real problem lies in Washington's spin culture, not the economy itself. While a ton of negative economic news has made it into the headlines in recent weeks, none by itself or in concert should tip the economy into recession. Unless, that is, someone wants one.

But for the time being, Scrooge is ruling over economic punditry land. Taking their cues from short-term stock traders who have suffered sizable drops in their portfolios this year, the gurus of the new economy are all doom and gloom.

James Cramer, whose TheStreet.com is just a few dollars per share away from landing exactly where its name implies, is the worst offender. His Dec. 4 New York magazine cover story on the coming recession would have gotten this year's award for being the earliest out of the box with an incorrect prediction, except that Business Week's chief new-economy booster, Michael Mandel, beat him to the punch with an Oct. 9 cover excerpt in that august publication providing the same reading of the tea leaves.

Sunday's New York Times landed on doorsteps with no fewer than three articles outlining possible permutations for an economic breakdown. And the Wall Street Journal, uncharacteristically late to the table, is now seeking to recover lost ground by predicting the Fed may be getting ready to ride to the rescue. Tuesday's Wall Street Journal reports warned that "the economy is closer to a recession than it has been in over a decade and we could be in for a hard landing." And last Friday, Journal editorialist Peggy Noonan, channeling the voice of Al Gore, joked that the next guy in the White House "gets the recession anyway."

There's no doubt the economy has slowed. Third quarter growth was lowered to 2.4 percent last week, far less than half of the second quarter's pace. At these levels of activity, unemployment will start to rise, possibly as soon as Friday when the Bureau of Labor Statistics releases its latest data. There will be an inevitable tide of layoffs from the last few interest rate hikes, which could drive unemployment to upwards of 5 percent. But that's not a recession, even though that fact isn't very comforting for those who will lose their jobs.

But it's important to remember how we got here. About 18 months ago, Federal Reserve Board chairman Alan Greenspan decided it was time to take the punch bowl away, to use the famous phrase coined by Fed chief William McChesney Martin during the 1960s stock market boom. The Greenspan Fed -- whose leader has inspired a cult-like following and two biographies now in the nation's bookstores -- raised rates six times for a total hike of a point-and-a-half in less than a year's time. The last increase came in June.

The first three quarter-point increases were simply an unwinding of the monetary stimulus ordered up after the near-collapse of the global economy in 1997-98, during the Asian flu and the Russian markets crisis. Boy, did they ever work. Coupled with a precipitous plunge in the price of oil (Remember when it was $10 a barrel?), the twin steroids of lower rates and extra cash in consumers' pockets sent the U.S. financial markets and the economy into overdrive. Calculate your net worth in late 1999, compare it to today and you get a pretty good measure of the level of froth in the turn-of-the-century punch bowl.

It was great for the half of the population invited to the party. (The most recent Fed surveys point out that over half of all Americans own shares of stock, either directly or indirectly through pensions and 401K plans.) But it was bound to come to an end. Indeed, fears of a bubble's aftermath dominated Fed decision-making until earlier this year.

Why? Price/earnings ratios (a simple division of the price of a stock by its earnings per share) for stocks in the Standard & Poor 500, which is a good proxy for the entire market, had soared to a peak of 33.5 in March 1999. How high was that? Before the 1987 crash, it had peaked around 22. Similar records in the low to mid-20s were set in the 1920s, 1946 and the early 1960s. The normal earnings ratio is in the teens. "These are rare occurrences," says David Levy, director of forecasting at the Levy Institute Forecasting Center, "yet in the 1990s we went into a whole different universe."

Turning the screw another three times, Greenspan sought to take the irrationality out of the market. But there was one major problem with his strategy: Interest rate increases are a blunt instrument for hammering stocks. The impact of tighter credit tends to come nine months to a year after its imposition. And it doesn't necessarily hit the market. It first hits those actors in the economy who are what economists like to call "interest-rate sensitive," like home- and car buyers.

That's the sad part of the pain that will be administered over the next six months as the full impact of six rate hikes works its way through the real economy where most Americans live and work. People whose only connection to the bubble was a near-minimum wage job and a mountain of recently-extended consumer debt will be among those hardest hit by the layoffs and reduced economic opportunities. But count on the college-educated dot-commers in their 20s and 30s who lose their jobs to get all the headlines.

The next chapter in the economic story will take place in Washington. Greenspan will be pressured by Wall Street to lower interest rates.

Indeed, the pressure already seems to be on him. In a speech at a banking conference Tuesday, just two days after Cheney cautioned Americans about a recession, Greenspan said: "In a period of transition from unsustainable to more modest rates of growth, an economy is obviously at increased risk of untoward events that would be readily absorbed in a period of boom."

Even though Greenspan will probably leave rates unchanged for now, look for a change of stance at the Fed's next meeting on Dec. 19. Inflation will be declared dead and an economic slowdown will be proclaimed as the main concern for 2001.

But the real action will come when the next administration begins outlining its economic plan in late January. A media cranking out scaremongering economic stories will be doing the bidding of the presumptive Republican administration, which still wants to enact massive tax cuts for the well-to-do. "I would hope that would change people's calculations with respect to the wisdom of the kind of tax cut that Governor Bush has recommended," Cheney said on "Meet the Press," suggesting that the $1.3 trillion tax cut at the center of Bush's domestic policy proposals is exactly the kind of medication a maybe-tanking economy needs.

Unfortunately, a big tax cut for the wealthy is exactly what the economy doesn't need right now. It would go into savings and conspicuous consumption, and would do nothing to shore up the wobbly balance sheets of indebted households. (An immediate minimum-wage hike would be the best medicine for that.) What the Bush tax cut may do, as World Bank economists warned on Tuesday, is exacerbate the risk of economic vulnerability.

To hear him speak, Bush sounds like an economic illiterate. But Cheney, whose experience includes participating in transitions to five prior Republican administrations, certainly understands the power that government fiscal policy can have over the economy.

When Ronald Reagan took office in 1981, his minions rewarded their corporate allies with massive tax breaks and devastated Democratic Party regulars with equally massive social-service cuts. The result was the worst economic downturn since the Great Depression, with unemployment hitting double digits. In some Midwestern precincts, where I was working at the time, it ran as high as 25 percent.

But three years later, when the Gipper was running for reelection, a wobbly economy was finally emerging from the pasting. It was just in time for his 1984 "Morning in America" campaign.