I'm not anorexic, I don't diet and I don't spend hours at the gym. I'm just naturally slim; deal with it. 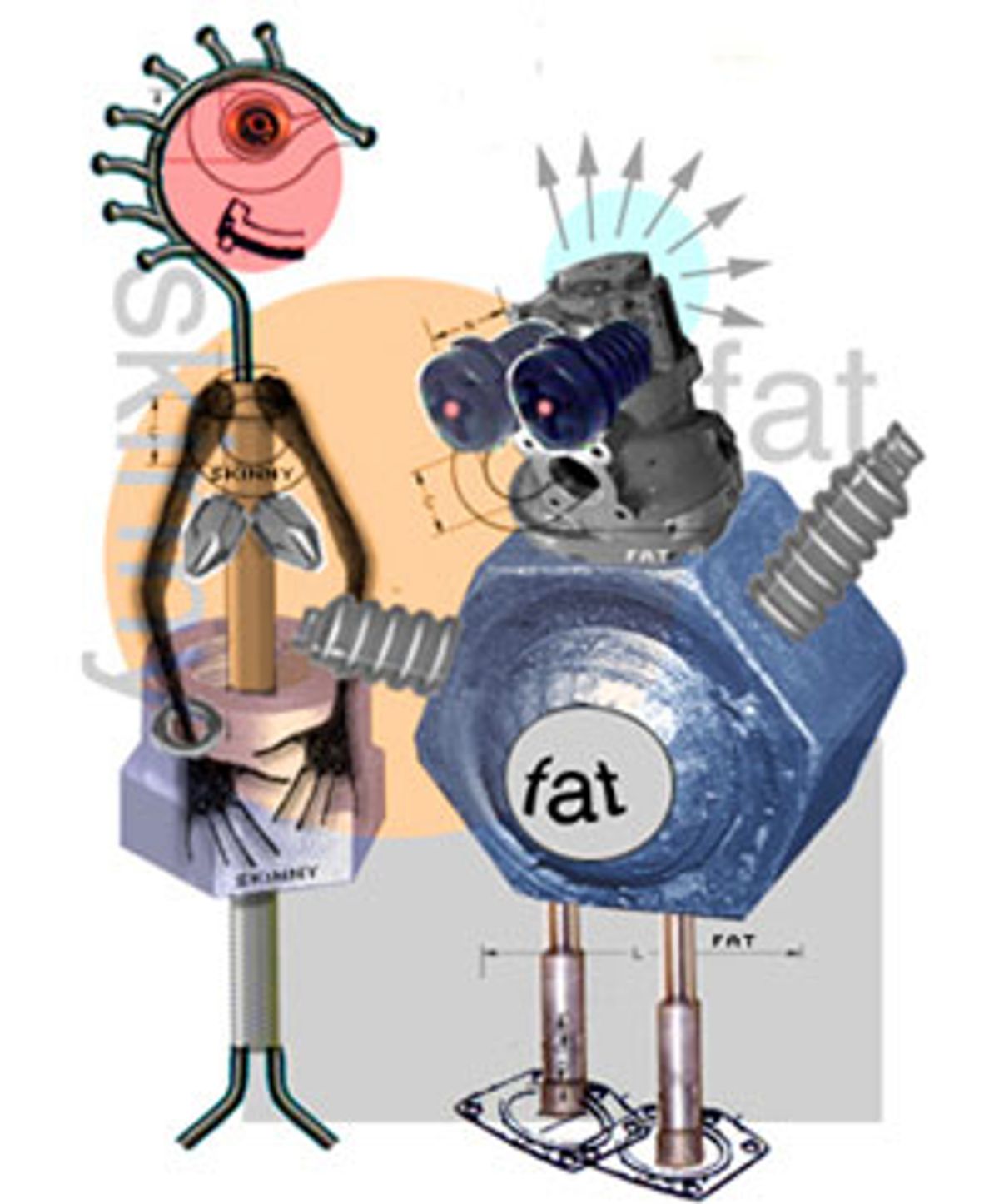 If you are one of the many people who insist our society equates thinness with success and happiness, one thing is obvious: You're not thin.

Truth is, thin people these days are tastier targets for public persecution and righteous indignation than Bill Gates and Marilyn Manson combined.

In today's thin-phobic society, it is crucial for the ordinary citizen not only to be deeply concerned about those with lower-than-average body weight, but to air his or her views regularly, in front of anyone who will listen, especially if that person happens to be thin.

I know, because as a thin woman, I am a frequent target of the body-image police.

Some idle co-worker at the office will suddenly fix me with a censorious eye and announce, "You're tooo skinny." At social events, some acquaintance will invariably confide, with an embarrassed glance at the ground, that they "really do" think I need to put on a few pounds. And at a recent family gathering, a favorite aunt proclaimed, in front of everyone, that my family had decided I was too thin for comfort (theirs, not mine).

In fact, there's nothing wrong with my weight. (I can hear the warning bells in your head from here, but please read on.) At 5-foot-8 and 120 pounds -- measurements: 33-25-35 -- I am, in a word, slight, although not without a few fine muscles and gentle curves. "Slight," incidentally, isn't a bad word. I prefer to be called "slim," "slender" or "willowy," but I rarely get described in those terms. To most people I'm just thin -- a powerful word despite the fact that its synonyms include "flimsy," "insubstantial," "weak," "meager" and "puny."

Nevertheless, my metabolism has found its cruising speed. After a typically angst-filled and somewhat heavier adolescence, my weight slowly began to diminish until it leveled out, along with my neuroses, about five years ago. It hasn't strayed since. Thus, I reached a natural size I'm comfortable with, and the rest of the world began to writhe.

When my frame first began to rouse a call to action, I felt the need to justify my weight and reassure my concerned detractors. I pointed out that my doctor tells me I'm perfectly healthy, with low cholesterol, high iron and the right percentages of all the major vitamins and minerals. I eat a wide variety of foods, as much as I please, both good (fresh, nutritious, easy on the conscience) and bad (heavily processed, high in sugar and fat, proof of a benevolent God). I never diet, count calories or analyze the nutritional components of anything, but I do stop eating when I'm full, regardless of what's left over. My daily exercise generally consists of a long walk, an impromptu (and brief) wrestling match with the boyfriend and outsmarting the cat with a shoelace. In other words, I live my life as best I can, the bod takes notes and then it does as it pleases. But I have to swear on Gutenberg himself before anyone will believe that.

The assumption, I suppose, is that all slim people choose their body shape through a rigorous self-imposed regimen of diet and exercise, or both. Science doggedly continues to insist that weight is largely a matter of biology and genetics, yet no one recognizes slim for what it is for me, and millions of others -- just another result of metabolism and family history. Nor do they seem to realize that confidence and self-esteem don't come off the rack with a size 5. I ride the same wave of horror, resignation and occasional optimism that most, or maybe all, women do when it comes to accepting my perfectly average looks. When an otherwise ordinary day is punctuated by a well-intentioned e-mail from one friend casually mentioning that she hopes I'm taking B-12 shots, or another who is concerned about the amount of food I eat at dinner, I start asking my boyfriend, "Do I look skinny in this?"

While no one has ever explained to me what it is about thin people that makes it seem acceptable for others to publicly pass judgment, it isn't hard to see where those who do are taking their cues from. The mania surrounding our preoccupation with physical beauty is like a raw wound, and has morphed into a cloud of damning hostility toward anyone who has attained an aspect of "the physical ideal." This, along with the ever-present specter of eating disorders, seems to justify the vilification of anyone not carrying a few extra pounds. If you're not thin, it's tres chic to be repulsed by anyone who is. The media bandies the word "anorexic" about like a volleyball, attaching it to all those without matronly upper arms (thus trivializing a serious and complex mental disorder).

Examples? In a national daily's review of "Charlie's Angles," a (male) reviewer describes the three stars as "foxy babes" and a "walloping dose of human Viagra," yet still refers to Cameron Diaz as "gaunt," "skeletal" and "arse-lacking." People magazine's recent cover story on the correlation between body size and self-esteem quoted a Shreveport, La., psychologist as saying, "All these skinny little actresses look like they came out of Hitler's concentration camps. Women were not designed that way. Everybody can't look like Calista Flockhart and why would you want to?"

In fact, some women are designed that way. Slim is one of the many varieties of the human form. It always has been, and it's likely that it always will be. But so what? Thinness alone doesn't make you rich, it doesn't find or help you keep a job, it doesn't make your husband faithful and it won't garner you a ton of fabulous friends. For the vast majority of us, body size is just another slice of life. How big or small a slice depends on your head space, not your dress size.

Easy for me to say? Not out loud. But after 20 years of battling my own demons, I've decided my weight is just fine with me. Politically incorrect though it may be, I own my thinness. There is nothing wrong with me.

And for crying out loud, there's nothing wrong with Calista either. Go eat a Twinkie and leave the poor girl alone.

Tammie Hall is a Canadian freelance editor and writer.