Xmas fills the air with dashed hopes and chicken nugget-eating depression. These holiday pranks will keep your misanthropy at bay. 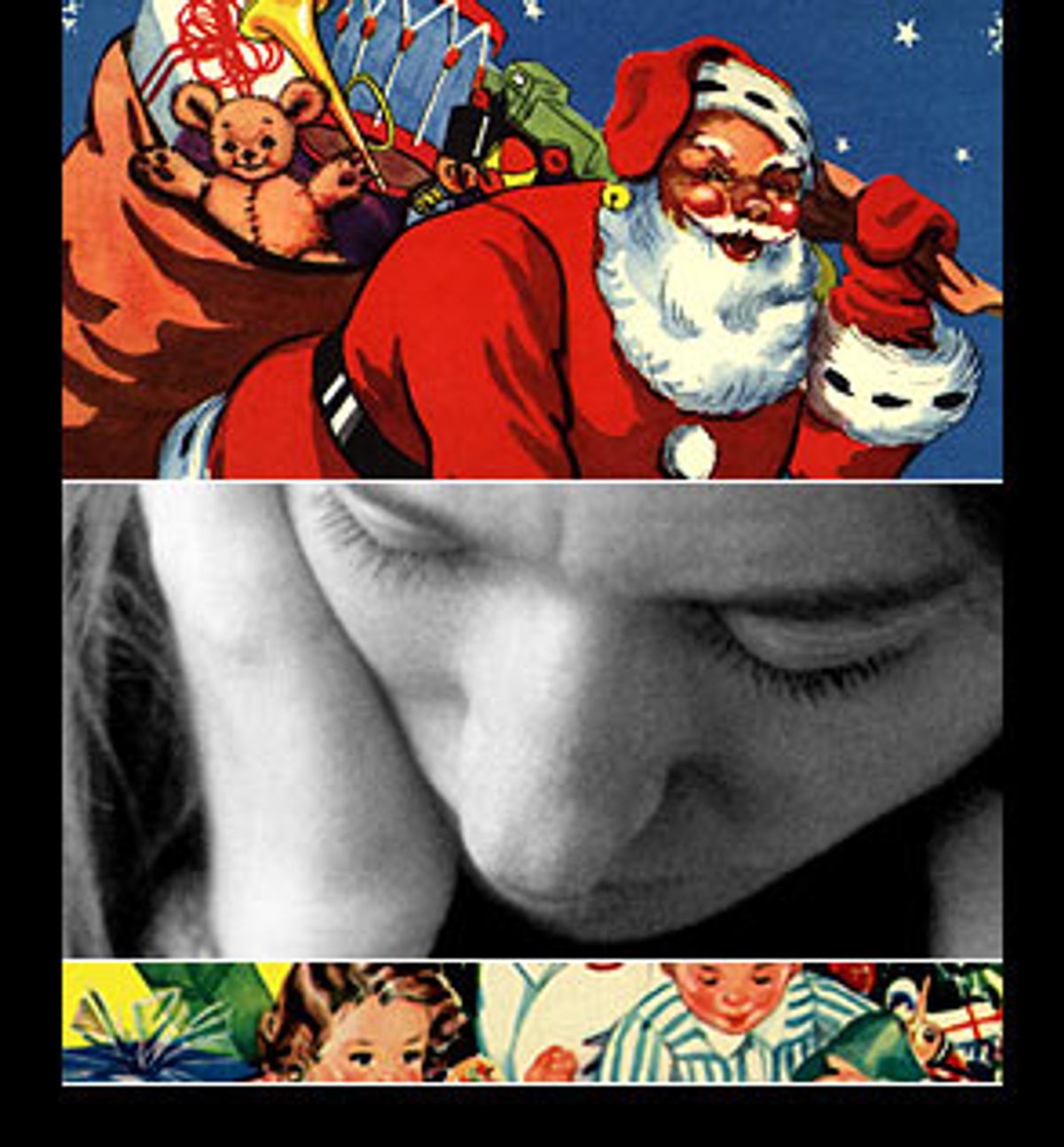 It's holiday time again, and it's the most wonderful time of year if you're an upper-middle-class, Methodist mom in the middle of the country, living in a sprawling, ranch-style house that glows like a jewel box in the snowy landscape and screams "cozy."

Your glamorous and intelligent children are rushing home for the holidays in colorful woolens from their universities back East. Everyone is looking forward to spending lots of time singing carols in the original German around the grand piano and arguing about poetry and legal torts around the ol' fir tree. Whole haunches of Angus are dragged out of the garage livestock refrigerator and prime cuts of meat are lovingly prepared. Dad-killed ducks are rendered, hams are fruitily decorated to look like Pucci dartboards. Affluent and witty neighbors troll by impulsively on a sledge to drop off large pies and expensive gifts, expertly wrapped in metallic paper.

Great Grand-Nonny's real silver lies on the table next to the Wedgewood gravy boat and the whimsical party crackers imported from England. Elaborate wreathes of holly and pyracantha surround thick, scented candles above the roaring fireplace, where fragrant pine woods blend with the salivary aromas of burning butter, sugar, pork and clove. There are a few well-behaved and precocious 3- and 4-year-olds who run around irresistibly in little plush footsy-suits and say stunningly hilarious things, their innocent joy palpable and infectious.

Then there's the vast majority of less fortunate people in the world who dread the holidays and spend Xmas lighting cigarettes off the space heater, unshaven in a lousy apartment, wearing the clothes they slept in, having a Blockbuster video day or merely watching the burning Yule Log on TV and drinking until it seems to actually have dialogue.

Holiday cheer is scarce for the lonely, broke and downtrodden. The only reindeer those people are likely to encounter is the one on the front of the Jagermeister bottle. The aggressively cheerful facade of the holiday season holds nothing for the desperate, and tacitly implies that the disheveled sad sack has failed deeply and personally by not creating an idyllic and luxurious family situation for himself, if for no other reason than to host this annual holiday virus.

Many such people are forced to stave off severe seasonal depression and the humiliation of life failure by such jarring stimuli as big death action movies. It is no coincidence that many of the biggest budget, Schwarzenegger-style, shoot 'em in the face films open on Xmas Day. Watching wrathful murders makes depressed people feel strong. They walk home in the cold to their empty apartments, hopped-up on the sexy pump of rage, hoping some asshole will say something obnoxious to them so they can feel justified in kicking the joker until he doesn't move anymore. "Howdya like that, heh?" one can leer as the perp squirms in the gutter. "Merry f---ing Christmas."

This violently escapist conclusion is less painful for both parties than staying home and watching "It's a Wonderful Life" and crying hot, piteous tears for oneself when everything turns out OK at the end. "When will I get my happy ending?" one sobs between chicken nuggets. Not this Xmas.

Those in the lower-to-middle class who suffer suburban holidays endure a whole other variety of torture, primarily in the form of needless family strain. There is an unwritten law (probably espoused by the airline industry) that for the winter holidays, long-distance families -- even those whose members don't really like each other -- must fork over vast sums to travel to be together.

Once one finally gets home, one is forced to encounter soused, embarrassing relatives with handlebar moustaches whom one would rather never, ever see again, and thank them profusely and laugh indulgently when unwrapping such appalling and worthless gift items as whimsical toe-socks and electric tongue-scrapers. Unless one has an exceptionally gifted mother, the food surrounding Xmas is usually a throwback to the days of frenzied pagan gluttony and the Satanic zeal that cookbooks in the 1950s had for the excessive uses of shortening and bacon. Since 98 percent of the women in America hate their bodies to have flesh on them, the holidays are either a time of painful abstinence or outright self-loathing.

Xmas today is a feverish, mindless and unregenerate overspending orgy. It is the Great Guilt Trip, the "buy a little something for everyone you love" disease that corporate America has infected our lives with, via the Trojan horse of a "religious holiday." To personify and encourage this lemming-like leap into massive consumer debt, we have our charming, portly mascot St. Nick, who, I discovered after perusing Alban Butler's indispensable classic "Lives of the Saints," has a biography that has suffered horribly from bastardization. St. Nicholas of Myra was a pious young man in fourth century Asia Minor who came into money following the death of his well-off parents. Upon hearing of a local man who had plans to sell his three daughters into prostitution, Nicholas threw a small sack of money through the man's window, providing the oldest girl with a dowry and thus enabling her to marry. As the other two girls came of age, he did the same charitable act to offset their future whoredom. As a result, St. Nicholas was represented in visual folklore as someone who tossed small sacks around.

Due to the crude artistic renderings of these sacks, many early Christians mistook the sacks for children's heads, giving rise to the rumor that Saint Nick had rescued and revived three children who had been slain by an evil innkeeper and subsequently pickled in a brine tub. Thus, St. Nicholas became the patron saint of children.

The true legend of Saint Nicholas is a damned far cry from his being a fat, bearded yutz from the North Pole who slides down the chimney and brings Barbies and Hot Wheels to all the children of the world. If you're considering selling your children into prostitution, perhaps you'll get a visit from St. Nick, but taken into actual historical context, the whole charade of letting one's children climb into a tarted-up drunk's lap at Macy's to bark out their greedy consumer object-lust is bogus and unwarranted, and the chilling result of corporate brainwashing.

There are positive aspects of Xmas that people tend to dwell on when struggling to achieve the holiday spirit. Xmas is the only time of year when senior citizens get dragged out of whatever urine cave they are inhabiting and are allowed to mingle with the general population. There are lots of parties, which enable lonely single people to raid their friends' medicine cabinets for Vicodin.

And there is that moment sometimes, when a transcendent hush falls over the dark street, and there is some unnameable thrill in the icy air, a collective human exuberance, and one looks at the tiny blinking stars though the spidery fingers of naked trees and feels full of a weird and wild hope.

But I usually miss that moment, because I'm pouring boiling water all over some child's snowman. Ho ho ho!!! And here's a variety of other holiday-type pranks to use as an antidote (or an additive) for your Yuletide misanthropy:

Build a panhandling snowman: Make a sad, one-armed snowman sitting on the sidewalk, wearing old, grimy clothes. Then put a crudely written cardboard sign next to it that says, "I am a 56 year old Vietnam veterin [sic] with Hepotitis D Please help." Make sure you put out an old hat, and come by every half-hour or so to collect the money for your very own Christmas smack fund.

Hang an apartheid wreath: Burn a radial tire and put a metallic bow on it, then hang it on your front door: "In Remembrance of those brutally murdered under Apartheid." Way to bum out the neighbors and win points for PC sensitivity, too! Plus, the carcinogenic aroma of burning rubber alloy should transplant those of clove-studded roasts, pine needles and any other chestnut-roasting jive smell in your own home and those of all of your surrounding neighbors for several hours.

Here's a real Xmas morning "stumper": Instead of toys in the stocking for the young ones around the house, fill each stocking on the hearth with a prosthetic foot -- a real ampu-teazer.

Find any church nativity set and surround it with "Police Line -- Do Not Cross" tape, then make it look like baby Jesus shot one of the Three Wise Men with a handgun. Preferably the black king. Then you can have Jesus with a talk balloon, saying, "I thought the frankincense was a gun!" A two-headed baby Jesus is also a fun changeling substitution.

Another fun one is to rip up cotton balls and throw ketchup on them, in front of the fireplace. That way, when everyone comes into the living room for Xmas morning, you can say, "Uh-oh. White hair and blood. Looks like the dog got him. Poor Santa."