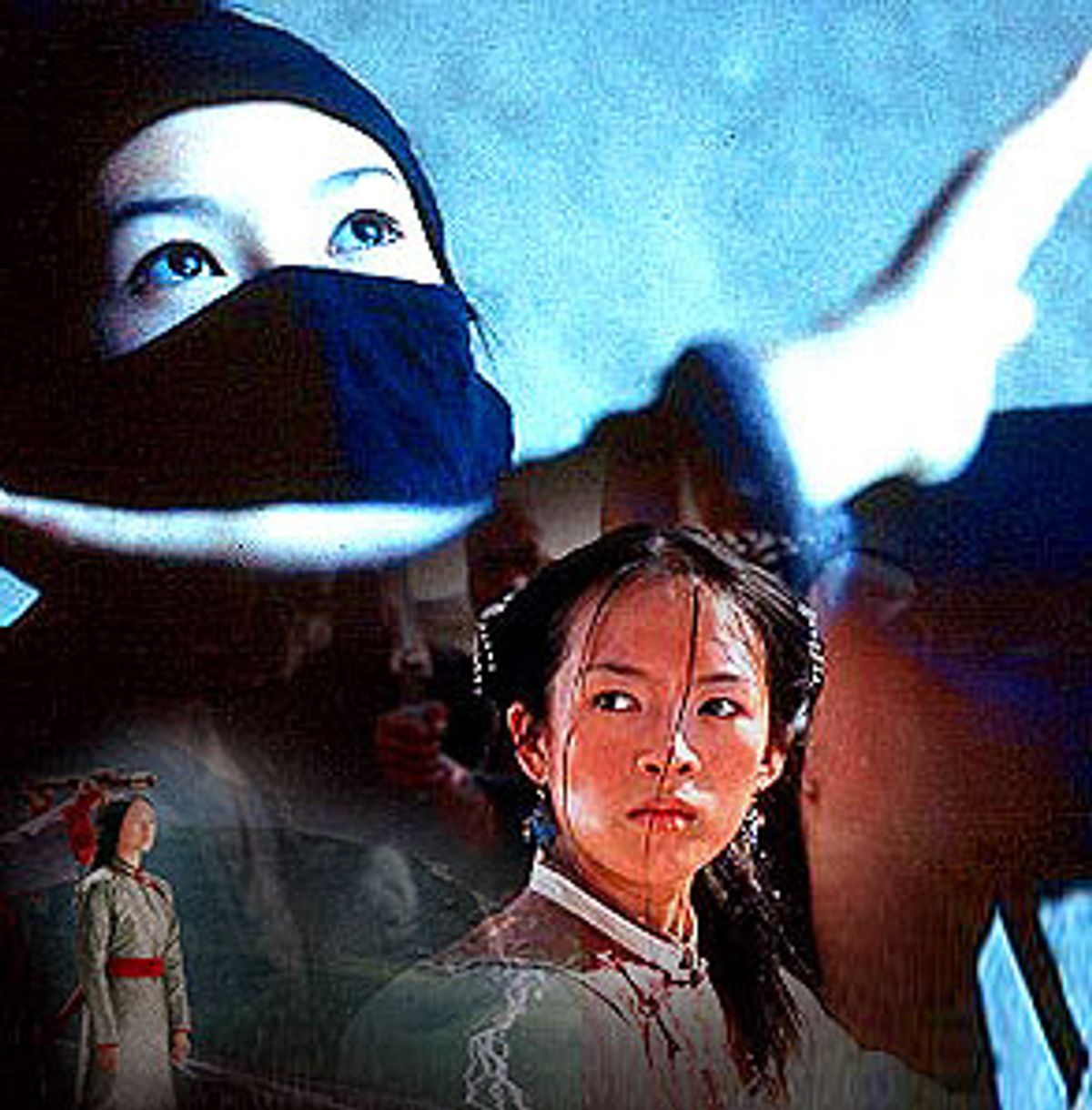 There's so much dreamy beauty in "Crouching Tiger, Hidden Dragon" that it's almost like a narcotic: By the end, you're likely to have forgotten, or at least forgiven, the long, dragging patches between its gorgeously executed action sequences. It's a movie that casts a flickering spell from the very outset, not with colorful excess but with restraint.

Director Ang Lee's brand of restraint isn't always a virtue, and even in "Crouching Tiger, Hidden Dragon" it sometimes feels as if he's stretching the story's significant moments on principle, rather than letting the movie find a quicker, more natural rhythm. Lee is so clearly preoccupied with filmmaking process that he often seems numbed to the charisma of his actors. But "Crouching Tiger" still manages to stoke a satisfying glow, probably because its pristine lyricism suits the material, a romantic adventure set in ancient China that enfolds themes of thievery, loyalty, duty and unrequited love.

"Crouching Tiger" is, of course, an arted-up martial arts film, but it grooves more on the tradition of Asian swordplay movies popular in the '50s and '60s than on the kung fu movies that found favor in the '70s. Lee's source for the movie, whose screenplay was written by James Schamus, Wang Hui Ling and Tsai Juo Jung, was a section of a five-part, pre-World War II novel by Wang Du Lu. The story opens as the powerful and legendary swordsman Li Mu Bai (Chow Yun-Fat) travels to a security compound that's supervised by an old friend, Yu Shu Lien (Michelle Yeoh). He's decided to change the direction of his life and he wants to surrender his sword, the Green Destiny, to a prominent and respected leader, Sir Te. Shu Lien is on her way to Beijing; will she deliver the sword for him?

She does, and at Sir Te's home she meets young Jen (Zhang Ziyi), the beautiful and rebellious daughter of a local official. Jen is engaged to be married, but she clearly has a taste for adventure; Shu Lien, older and wiser and experienced in martial arts, tries to advise her. When the Green Destiny is stolen in the night by a lithe, petite figure cloaked in black, Shu Lien and one of Sir Te's security officers take off in pursuit. The thief isn't immediately found, and Li himself comes to Beijing and joins the search for the missing sword. He believes that notorious thief and killer Jade Fox (Cheng Pei Pei), who murdered his master years ago, may be implicated in the theft, and he wants to see justice done at last.

The plot becomes more and more labyrinthine, but even when you're feeling a little lost, "Crouching Tiger" is always gorgeous to look at. Cinematographer Peter Pau finds majesty in every one of the movie's numerous settings, whether he's showing us pink-beige buildings surrounded by bushy greenery, a desert that glimmers with a golden sheen or a verdant forest whose trees seem to shiver with life.

The movie's gorgeous centerpiece is a story that takes place in the desert, a flashback sequence that gives some background on young Jen: We see her traveling through the desert with her mother when a gang of bandits, led by the fiery Lo (Chang Chen), assails her carriage. She fights him when he takes her ivory comb; they tussle, but she collapses, only to awake later in his hideout. Obviously smitten, he tries to win her over with kindness and love; she responds by clonking him on the head with a rock. Eventually, she allows herself to sink into his embrace, and the two become lovers for a time, living happily in the desert.

The desert sequence, in the way it's both directed and shot, fairly vibrates with energy even in its quieter moments. It's thrilling at the beginning, when the bandits arrive on horseback, all their tails and trimmings flying behind them; then it segues into a passage of dulcet beauty as the lovers gradually attune themselves to their new life together.

The segment works well for another reason: Zhang Ziyi, the young actress who plays Jen, radiates boundless vigor; the movie leaps to life whenever she appears, not just because of her svelte frame and catlike physical grace as a fighter but also because her elusive smile and coolly mischievous eyes always keep us guessing. She's never completely readable, and the way her character strings us along is one of the movie's pleasures.

There are still too many stretches where "Crouching Tiger" feels weighed down by an awareness of its own beauty. Lee long ago proved himself a careful craftsman, a filmmaker capable of giving us crystal-carved moments. But his craft doesn't translate into emotional involvement; he always keeps us at a distance, laying out his poetry like a precious artwork on display. That approach worked reasonably well in "Sense and Sensibility," maybe because Jane Austen lends herself to a certain degree of formality. But "The Ice Storm" merely read like an outsider's view of chilly '70s suburbia. All the warmth and quivering heartbreak of Rick Moody's novel had been buffed out so Lee could deliver his perfectly faceted stone.

The central love story in "Crouching Tiger" is simply a disappointment. The current of feeling that connects Li and Shu Lien is clear from their first meeting, by the way their gaze is locked: They're longtime friends who would be lovers if not kept apart by circumstance. But Lee approaches the story with so much subtlety that it barely registers as significant -- a waste when you have two actors as effortlessly appealing as Yeoh and, especially, Chow.

With her fearless stunts, Yeoh won over American audiences in Jackie Chan's "Supercop." (She had made her mark much earlier in Hong Kong with pictures like the thrilling "Heroic Trio.") Yeoh's role here shows off her more nuanced skills as an actress -- she glimmers with quiet dignity, and her fight scenes are magnificent. But her sexual vitality remains too tastefully veiled; I want to see an actress as sparkling as Yeoh getting a little bit of enjoyment out of life, and out of love, not just suffering nobly every minute.

The same goes for Chow's Li. There's a reason Chow is the most popular movie star in Asia: He's damn sexy, especially as the dazzling center of John Woo's best films ("The Killer," "Hard Boiled"). His expressiveness is extraordinary: He can menace or seduce with the mere arch of an eyebrow. (Even 200-year-old-plus creatures of the night aren't immune to his charms. In a recent episode of the WB's "Angel," the preternaturally depressed vampire brightened visibly when he heard that two of his colleagues had bumped into Chow at a Hollywood party.)

But here, Chow, like Yeoh, is so constrained that he's practically relegated to the background. His sensitivity and sly grace as an actor aren't in question: There's plenty of liquid longing in the way he looks at Yeoh. But we never get the chance to warm up to the couple even as dream lovers in another life. Their romance doesn't have to be florid (in fact, that would be a mistake), but as it is, it's so vaporous that there's no tension in it. It's less like unrequited passion than a Zen pool that the two of them stare into endlessly.

Lee doesn't have the warmth to make a great love story. The consolation prize is that the action sequences in "Crouching Tiger" are bounteously seductive -- choreographed by Yuen Wo-Ping (whose previous credits include "The Matrix" and numerous Jackie Chan, Jet Li and Sammo Hung pictures), they're the best-staged action sequences I've seen at the movies in years. The actors' movements are clearly shot: It's always easy to tell who's where and how he or she got there. The camerawork is artful but not showy. Every shot is designed to sustain the illusion of reality; we're not constantly reminded, as with so many other contemporary action movies, that there's some hotshot cameraman muddling around to make things seem real.

In "Crouching Tiger," we simply believe that everything is real: Bitter opponents cross swords as they float among the treetops, as disdainful of gravity as they are of one another -- it's as if their enmity has more power than science does. Swords whoosh, sweep, clatter and clang as the figures wielding them spin, crouch, spring and, occasionally, draw blood. Characters skitter across rooftops, half flying, half running, their legs slicing the air with Bolshoi scissors kicks.

The fight sequences in "Crouching Tiger" are where Lee lets his passion reign, and they make you wish he'd unleash it more often. When he's busy this way, when there's no time or patience or need for his particular brand of rock polishing, his visual sense kicks into overdrive, and it's stunning. Few of the fight sequences in "Crouching Tiger" are earthbound: Characters are always taking flight, leaping incredible distances, springing from one corner of the frame to another with inhuman speed. Elsewhere, Lee's movie may suffer from torpor and a vision of repressed ardor that's so delicately rendered it looks like indifference. But when Lee's characters start fighting, love is in the air, and it's all around, as inescapable as an unseen enemy.