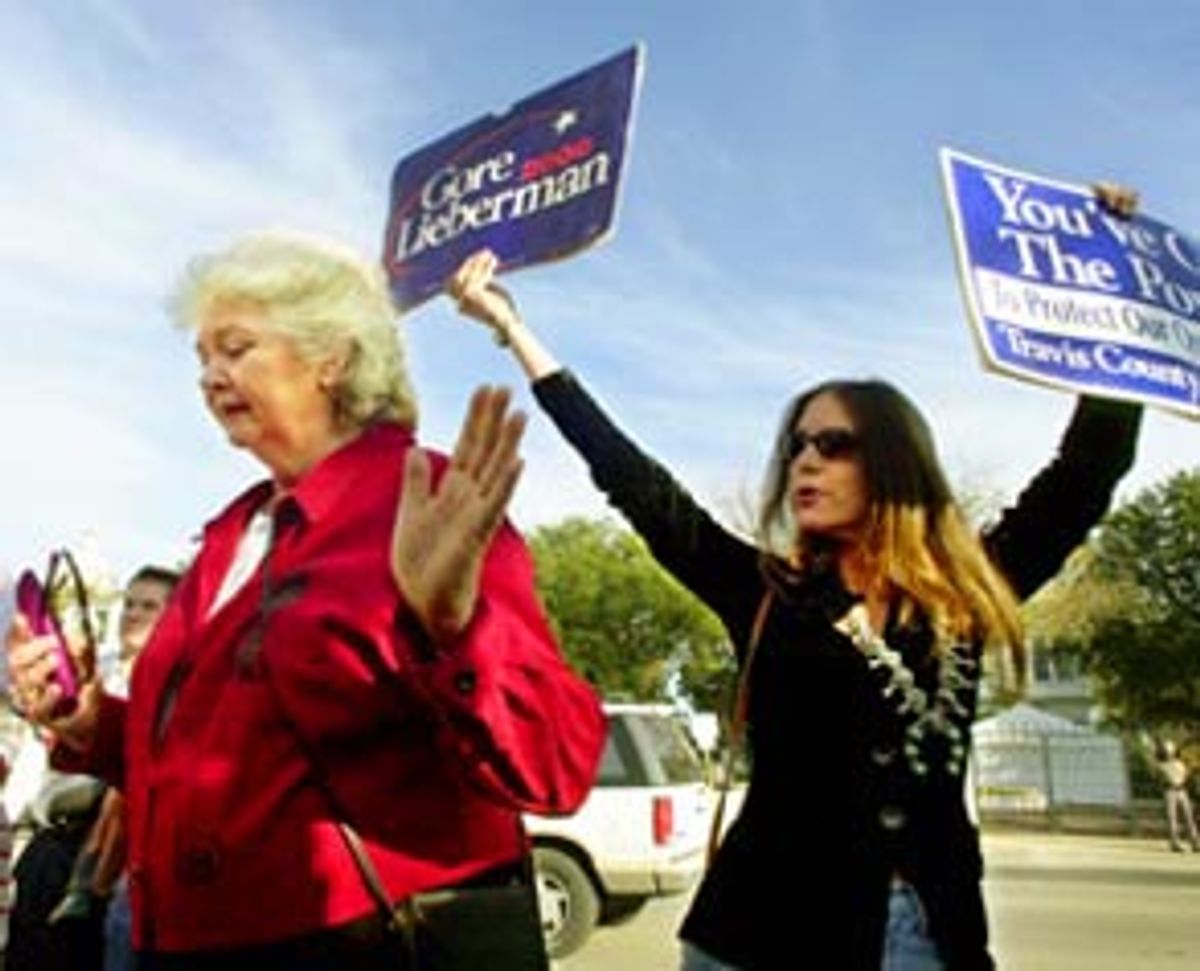 Or at least the best news since Florida was initially, if momentarily, called for him during Election Day, some 30 days ago. In a 4-3 decision, the court winnowed down Gov. George W. Bush's 537-vote victory to 154 votes -- accepting Palm Beach County's tardy 215 votes and counting Miami-Dade's 168 uncertified votes from a partial manual recount. Even more significant, the court ordered Circuit Judge N. Sanders Sauls, whose Monday decision the court had overruled, to begin supervising an immediate "manual recount of the approximately 9,000 Miami-Dade ballots that registered undervotes" as well as "all undervotes in any Florida county where such has not yet occurred."

"Because time is of the essence, the recount shall commence immediately," court spokesman Craig Waters read on the steps of the court as mouths dropped from Tallahassee to Washington and beyond. In another astounding development, immediately after the ruling Sauls recused himself from following through on the court's decision. As the New York Times reported Friday, Sauls and the high court have a long, fractious history.

The ruling shocked legal observers, pundits, certain reporters and even a former Florida Supreme Court justice -- all of whom incorrectly predicted Tuesday that the court would rule against Gore, and that Bush should prepare for the move to Washington.

Perhaps as a signal to the world that the justices were aware the U.S. Supreme Court was watching, the court leaned on state law, saying that "in tabulating what constitutes a legal vote, the standard to be used is the one provided by the Legislature. A vote shall be counted where there is a clear indication of the intent of the voter."

Regardless, Bush's man in Tallahassee, former Secretary of State James Baker, announced that his legal team would deliver an emergency petition to the U.S. Supreme Court to overturn the Florida court's ruling. The court's "reasoning and result places the court once again at odds with the sound judgment" of lower courts, the Florida Legislature and local canvassing boards, Baker said. He said the court's decision "could ultimately disenfranchise Florida's votes in the electoral college."

Additionally, in Atlanta, at the 11th Circuit Court of Appeals, the Bush legal team petitioned for an emergency injunction to halt the recounting process until the U.S. Supreme Court weighs in.

"This is a deeply split court," noted Florida constitutional law professor Joseph Little of the University of Florida College of Law. Chief Justice Charles T. Wells, Justice Major B. Harding and Justice Leander J. Shaw Jr. all dissented. ("I did, at least, predict a split" if the court ruled in favor of Gore, Little noted.)

Baker noted the split, too, reading an excerpt from Wells' dissent, which stated that the majority's decision "cannot withstand the scrutiny which will certainly immediately follow under the U.S. Constitution." Wells stated that the decision has "no foundation in the law in Florida as it existed on Nov. 7, 2000."

"Prolonging the judicial process in this counting process propels this country and this state into an unprecedented and unnecessary constitutional crisis," Wells wrote, a crisis that will inflict "substantial damage to our country, to our state, and to this court as an institution."

Whatever Wells' disagreement with his brethren, however, their decision was assuredly good news for the beleaguered vice president. "Certainly, Mr. Gore's won himself a reprieve of some kind," Little said. "He's also won himself a big burden -- counting all of the undervotes" by the Tuesday deadline, after which the GOP-controlled Legislature has pledged to appoint its own electors.

The number of statewide undervotes is still uncertain. Including the 9,000 or so Miami-Dade undervotes, CNN and the Associated Press have assessed that there are at least 43,432 undervotes statewide.

Speaking outside the vice president's residence in Washington, Gore campaign chairman Bill Daley immediately heralded the court ruling as "an important victory for what has been Al Gore and Joe Lieberman's basic principle since Election Day, and that is a full and a fair count of all the votes."

Daley called it a "victory for fairness and accountability and for our democracy itself." He said that the court "wisely" ordered that the hand recount take place "in every Florida county where undervotes have yet to be counted. Then Florida and America will know with certainty who really won the presidency."

Little noted that the Florida high court's ruling was consistent with its decision a few weeks ago to extend the state's certification deadline so as to allow further hand recounts. All seven members of the court were appointed to the bench by Democratic governors, and they generally believe in bending over backwards to count and include votes. "From that point of view, today's ruling was consistent with the first ruling of the court in this matter," Little says.

And how are the law professors in Florida taking the news of today's surprising decision? Have they all taken to the faculty lounge for lively debates?

"We're doing exams here," he continues. "My colleagues are all hidden away grading exams. But we're like everyone else. We're wondering if we'll ever get a resolution to this before January."