Hysteria over infected cattle has overtaken France -- and the rest of Europe may not be far behind. 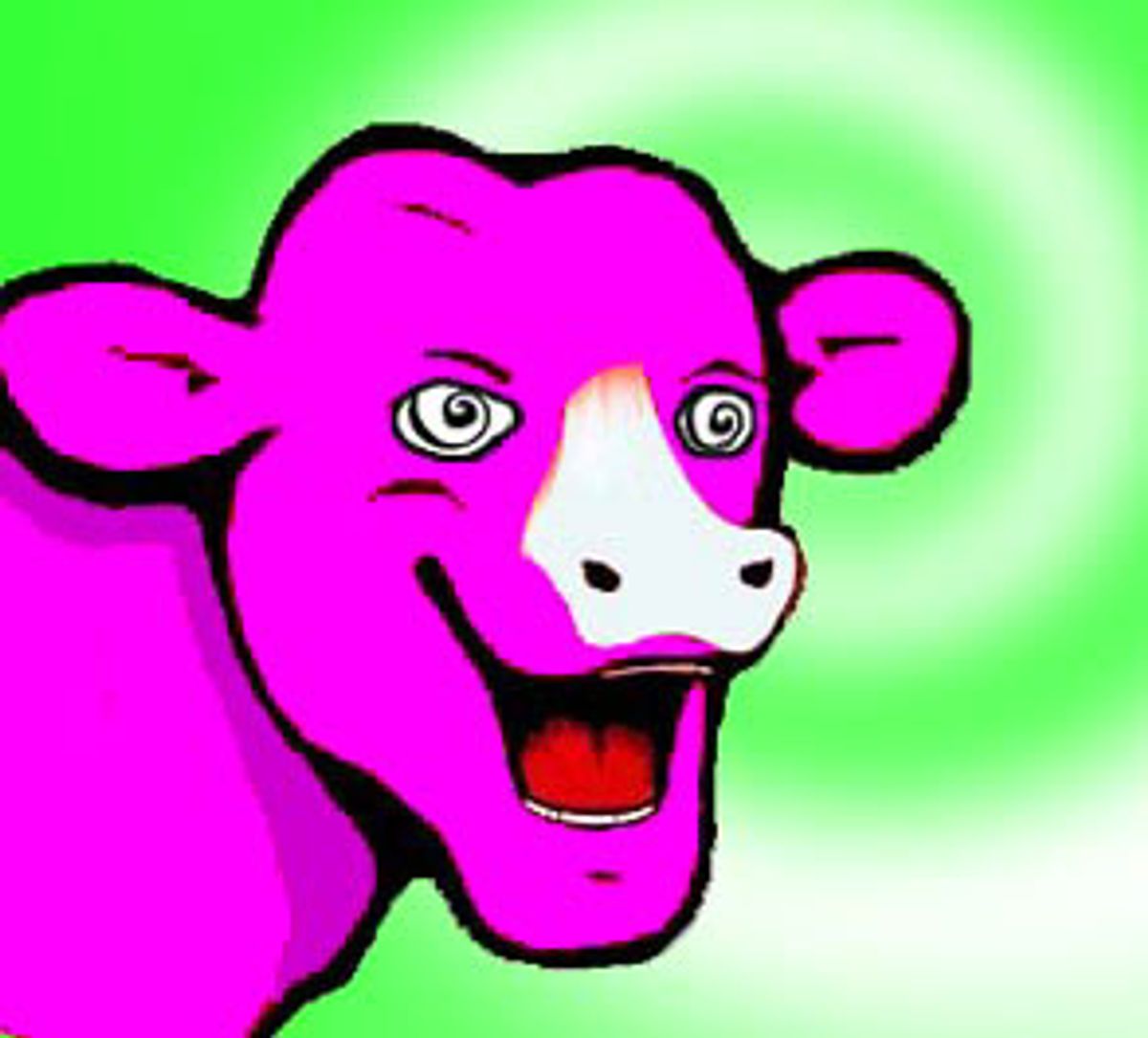 I recently stopped in at my favorite neighborhood bistro, where it's hard to spend more than 20 bucks on a brilliant meal, and Pascal gave me the bad news: If I wanted the ris de veau, this would be the last week. The guillotine of state was falling on this most prized of French delicacies.

Ris de veau, or sweetbreads, come from the thymus gland of a young cow or bull and are among the truly wondrous delights of old country cooking. Sweet. Succulent. Creamy. They harbor the texture of freshly plucked mushrooms but are as rich as liquid gold.

But ask for them here, right now, and most people will wonder if you've been bitten by a mad cow. Mad cows are everywhere, or at least on every newspaper front page, magazine cover and television news broadcast. And they are quickly herding their way across the continent as new cases of BSE, or bovine spongiform encephalopathy, have shown up in recent weeks in the slaughterhouses of Germany and Spain.

In an emergency session held earlier this week, European Union agricultural ministers met in Brussels, Belgium, and voted to ban the use of recycled animal parts -- thought to be a major source of mad cow infection -- as feed for livestock for at least six months. They also voted to eliminate all cows more than 30 months old from the food chain unless they are tested and proven to be free of the disease, a decision that could lead to the destruction of 2 million head of cattle. The cost of these precautionary steps is estimated to be in the billions of dollars

French cattle farmers, and the beef industry as a whole, are reeling at that prospect. Mad cow disease, or vache folle, has terrified France in the past month, producing a generalized panic that makes the AIDS anxiety of the 1980s look like a bad flu epidemic.

Beef sales are reported to be down 50 percent in some areas and prices have fallen through the butcher's floor now that more than 100 slaughtered cows have been found to have BSE -- an unfailingly fatal corrosion of the brain that transforms the animal into an angry, staggering beast until it eventually dies of wasting and neurological failure. Its human form, Creutzfeldt-Jakob disease, has much the same effect on people. Faced with market collapse, slaughterhouses are sending Ferdinand and Elsie back to their pastures.

Sturdy farmers in their rubber boots and brown casquettes -- the very emblem of all that was good, true and honorable in the French patrimony, the backbone of the struggle against Big Mac globalism -- risk becoming veritable bjtes noires at the dinner table. How could it happen, when just a year ago the French were still holding out against importing British beef, where widespread mad cow fears first popped up nearly a decade ago and where thousands upon thousands of cattle were destroyed to stop the spread of the disease?

French herds, the French public was told, were safe because they had been isolated from the feed and breeding stock of British beef. Remember, too, that for centuries the two countries have sneered at each other with gustatory hyperbole: The French referred to their rivals as "les rosbifs" (translation: They're dull and fat) while the Brits dubbed those across the channel "les grenouilles" (slimy and effete).

"Les rosbifs" simply could not be trusted around food. The inventors of industrialization had allowed technology to run away with the butcher shop, producing not only Dolly, the world's first fully cloned sheep, but -- even worse -- a roast beef production line in which taste and food safety had been sacrificed to corporate profit.

In France, the hearthstone of modern haute cuisine, the natives assured themselves that no such gambles had been taken. The French system for inspecting, testing and labeling meat has long been far more advanced, with each side of beef indicating its geographic point of origin. The use of bone meal in feed, which in Britain was suspected as a possible vector of the disease, had been banned for French cattle. And just to drive home the point of French food superiority, poster-boy eco-farmer Joseph Bove led demonstrations against that most globalized symbol of corporate grub, Le Big Mac.

Then came the bad news.

Meat inspectors last year found two cases of vaches folles in random checks of slaughterhouses. Then five. Then seven. By the end of November, 131 mad cow carcasses had been identified. The beast -- or microbe, or really neither, but rather a strange form of infectious protein called a prion -- had arrived, and could be infiltrating every butcher shop, every charcuterie, my God, every neighborhood bistro, or worse, maman's Sunday afternoon table.

How could it be? From within that maelstrom of fear, panic was born.

Even as the annual summer retreat emptied the French populace into beachside oblivion, scientific reports from Britain suggested that far more people may have been infected there with BSE during the 1980s than anyone previously knew, since it may take up to 20 or 30 years for Creutzfeldt-Jakob disease to appear. By the end of October, even as the number of French cases rose dramatically, the British commission appointed by Prime Minister Tony Blair three years ago to investigate the epidemic published a scathing assessment: Scientists, government inspectors, health officials, the meat industry, everyone had mumbled, stumbled, dissembled, denied and delayed action until a serious health problem had developed.

On top of all this, French television showed a devastating British documentary in which a young girl woke up one morning sobbing uncontrollably. Her agony continued inexplicably for another six months until neurologists diagnosed her as having the dreaded Creutzfeldt-Jakob disease. No one knew how she could have gotten it, except perhaps through jars of processed hamburger she had eaten as a baby.

On Nov. 6, Le Figaro, the French daily newspaper, published a similarly horrific account of a French adolescent dying from Creutzfeldt-Jakob, his parents guilt-stricken over what they must have fed their son. Add to that a report in the muckraking Le Canard Enchaine in which the French agriculture minister acknowledged that, well, actually, not all cattle feed is absolutely free of animal meal -- just nearly free, no more than .03 percent. The meal, after all, was still approved for feeding pigs and poultry, and it was not possible to scour processing equipment of every gram of the stuff when preparing cattle feed.

And shortly thereafter came the edict -- no more ris de veau, just as a few years earlier cervelles au beurre noire (brains sauteed in black butter) had been banned. Brains were understandable: After all, it's the brain that the prion destroys. But ris de veau? Some -- mostly not French -- people are squeamish about organ meats, but there seemed no particular evidence that prions lodge themselves in the thymus any more than they do in the muscle tissue that makes a steak. Even so, with prices dropping, beef became the food of poor men.

Oddly, the Belgians, the Italians, the Germans, the Swedes and the Swiss have exhibited nothing comparable to the terror that has swept France. Not that anyone is free of worry; a nastier, scarier death is hard to imagine. But in other countries it has not taken on the flavor of a national panic, pushing everybody but Al Gore and George W. Bush off the front pages. Here it borders on the hysteric.

Nowhere else in Europe does food hold such symbolic power over the national sense of self. Not even in slow-food Italy, where micro-regionalism is even more powerful than in France, does the memory of the abandoned farm village hold such a grip over the moral imagination. France may owe its prosperity to prowess in the aerospace, transportation and communication industries, but its character is rooted in the wistful longing for the village -- no matter that almost no one wants to spend more than a weekend there.

Now even the dream of the village and its "happy" farmers has been spoiled, and by whom? By the forces of industry, foreign and domestic makers of commercial feed, and by scientists -- the corrupt descendants of the revered Louis Pasteur, Marie Curie and Denis Diderot -- who cannot or will not tell us where this new killer lives and where it comes from.

Perhaps worst of all, these revelations fall in the wake of the medical scandal that tainted the previous regime, which approved the distribution of HIV-infected blood products and then lied shamelessly to protect itself. A lying government, confused scientists, corporate chicanery, fallen farmers and collapsed cultural pride: Little wonder the crisis of faith grows darker daily, replacing the tractable and clichéd indigestion known as "crise de fois" with what the rest of the European press has come to call "le psychose vache folle."