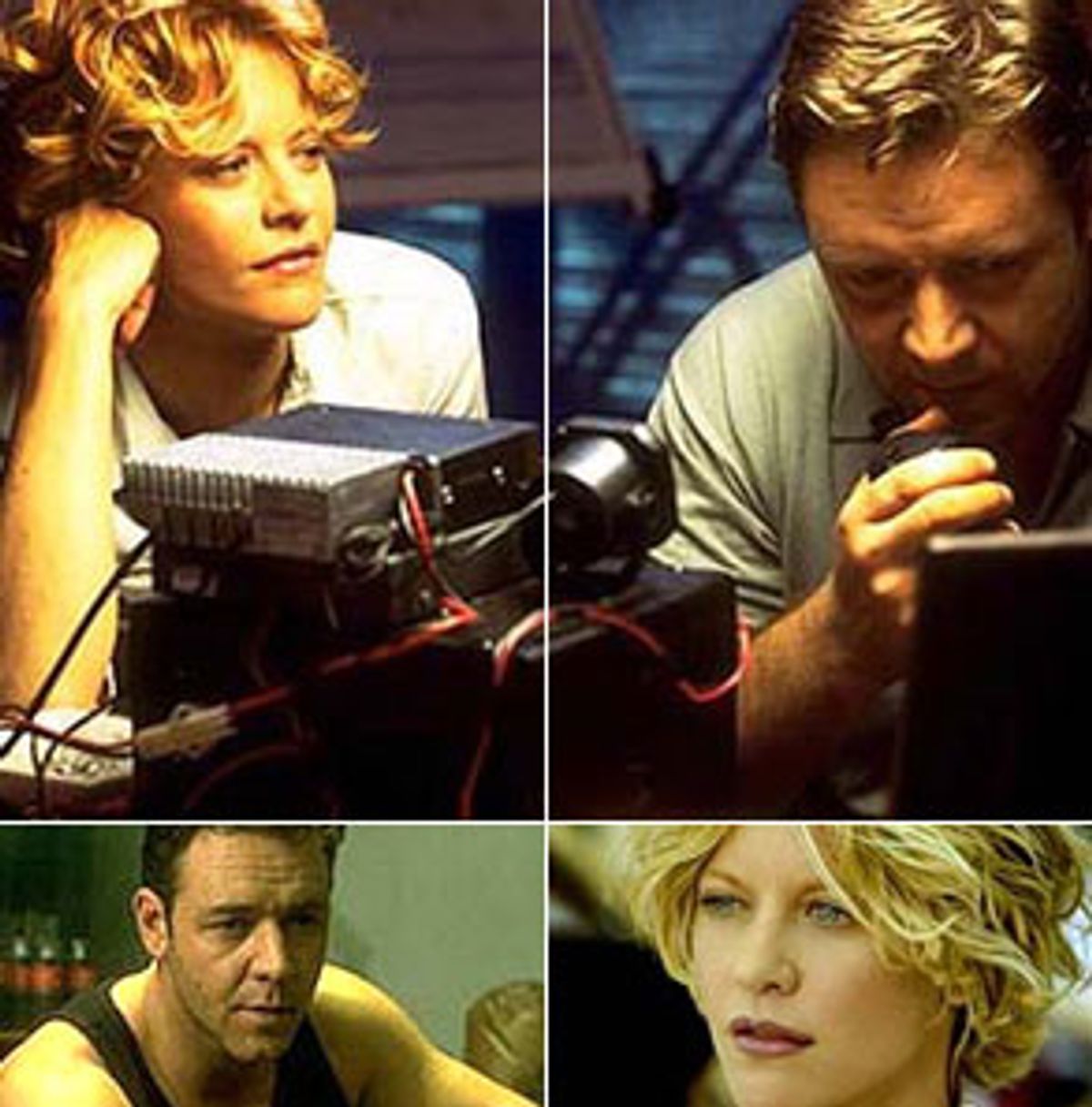 Everything about "Proof of Life" is intriguing and a little off. Set in the world of high-stakes kidnapping negotiations, this ripped-from-the-slicks fictional melodrama is absorbing without being satisfying. It's better at holding you hostage to suspense than at delivering an emotional payoff.

The film, based partly on a Vanity Fair article by William Prochnau, stars Russell Crowe as a professional negotiator and Meg Ryan as the wife of an American engineer who is kidnapped in the made-up South American country of Tecala. In the smashing, vertiginous opening-credit sequence, our hero sits in a pristine, ultra-modern London office and blandly recounts a blistering exploit rescuing a Frenchman in Chechnya. The mission unfolding in flashback on-screen depicts a realm in which deals are brokered, and broken, with bullets.

Always superb at serious play, Crowe deadpans his way through his boardroom presentation while we see him in Chechnya, hanging from a helicopter by his fingertips. In general, Crowe is never more there on-screen than when a script gives him some wiggle room, allowing him to suggest a distance between what he says with his eyes and with his mouth. It's his constant potential for righteous fury, mischief and unexpected sensitivity that makes him so magnetic. "Proof of Life" plops him down in a ruthless, rootless milieu that tests his wits and mettle.

Crowe's character has to be as direct in his connections to his client as he is wary of his employers and slippery with his antagonists. It's an oscillating line for Crowe to toe -- and he does it without tripping once. When his character approaches the distraught and angry Ryan, he convinces her to trust him without hesitation. She does -- and we do, too.

Crowe makes competence look sexy. At his best, with his combination of ironclad irony and bedrock honesty, Crowe is like an improbable blend of Humphrey Bogart and Gary Cooper: the cynic as nature's nobleman.

Crowe responds to Ryan's plea for help first as an assignment, then as a point of honor. Ryan's husband (David Morse) has been building a dam that he hopes will better the lot of the Tecalan people. The junky flunkies of a group of guerrilla drug lords kidnap him for a hefty ransom right after he and Ryan have a foul marital spat. (She suffered a miscarriage on a previous stint in Africa; their relationship has never recovered.)

Morse's Houston employers are teetering toward bankruptcy and have canceled their kidnapping insurance. So after Crowe comes to Morse's rescue, his higher-ups pull him back. He returns to Tecala as a freelancer.

This initial switchback sets off a smoke-and-mirrors alarm in the audience. The director, Taylor Hackford ("Dolores Claiborne"), knows how to pace and texture melodrama, but too many things happen simply so that other things can happen. The first half hour is filled with one-note scenes geared to explain why Crowe and Morse fall out with their respective companies. Being men on their own intensifies each guy's drama. But it takes too much sweat and tears for the film to reach its desired peak of urgency.

As Crowe begins to fall for Ryan and establishes a new team with a fellow corporate refugee, played by David Caruso, the movie becomes a blend of under-the-gun romance and guerrilla-cum-buddy movie.

Hackford and his screenwriter, Tony Gilroy (who also wrote the "Dolores Claiborne" script), put together this hybrid architecture as if with Lego blocks, one piece bluntly fixed onto another. Sometimes the pieces don't fit, as when Pamela Reed shows up as Morse's older sister -- a rigid, wired soccer mom who views Ryan with disdain because she sees her as a do-good hippie. When a performer as gifted as Reed proves to be an irritation, you know that the movie is jangling your sensibilities, not just your nerves.

Because of the real-life, tabloid-smothered romance of Crowe and Ryan, the couple's all-too-fleeting on-screen clinch has roused bad laughs at press screenings. Actually, the one problem with their sexual affinity is that their characters must suppress it for the sake of Morse; it only gets to seep into the film between the cracks in those Lego blocks.

As a dramatic actress, Ryan has been gaining confidence from picture to picture. I thought she brought off a difficult mix of command and vulnerability in "Courage Under Fire," and here she's fearlessly flaky. Dressed as eccentrically as Annie Hall, reduced to gasping every time Crowe reports a telephoned threat, she nonetheless conveys genuine emotional elasticity stretched to the breaking point. She keeps those little facial scrunches she specializes in to a minimum -- and suddenly, they elicit soulful pangs in her audience.

She and Crowe have an odd, push-pull chemistry; you want them to cut out the nonsense and get together. There's a beautiful pop-Jamesian moment when they share a glass of wine -- and Caruso, doing his hyperobservant act, notices the show of intimacy.

But the material isn't shaped for much to happen between them. Without giving anything away, all I can say is that too many movies these days are peddling the idea that sexual maturity is tantamount to resignation and compromise. In lieu of a hot courtship, I almost began to wish that the filmmakers would abandon their serious pretensions and hand Ryan a more active role in her husband's rescue. No such luck. Crowe gets to play an update of Mr. Rick from "Casablanca" while Ryan remains the woman who also serves by standing and waiting. The consummated partnership here is between Crowe and Caruso, who wring humor from their shared intensity.

Hackford pulls out the stops in his astoundingly intricate suspense scenes, conjuring nightmare imagery from terrorists grappling down a hillside with upsetting speed, or cutting instinctually between Morse's grueling, months-long captivity and Crowe and Ryan's attempts to spring him.

The final action sequence, in which the Crowe-Caruso rescue team takes out Morse's captors with military efficiency, is a model of lucid staging and editing. Crowe and Caruso plot their operation like two-fisted cartographers and enact it with thrilling dispassion. And the way Hackford stages and shoots it, you see where every bullet goes. But when the operation is over, so, really, is the movie. For all its nail-biting fusillades, it fails to score a shot to the heart.