The mountain-climbing actioner thinks it's a dizzy, precarious thrill ride. If you ask me, Herbie the Love Bug was just as exciting. 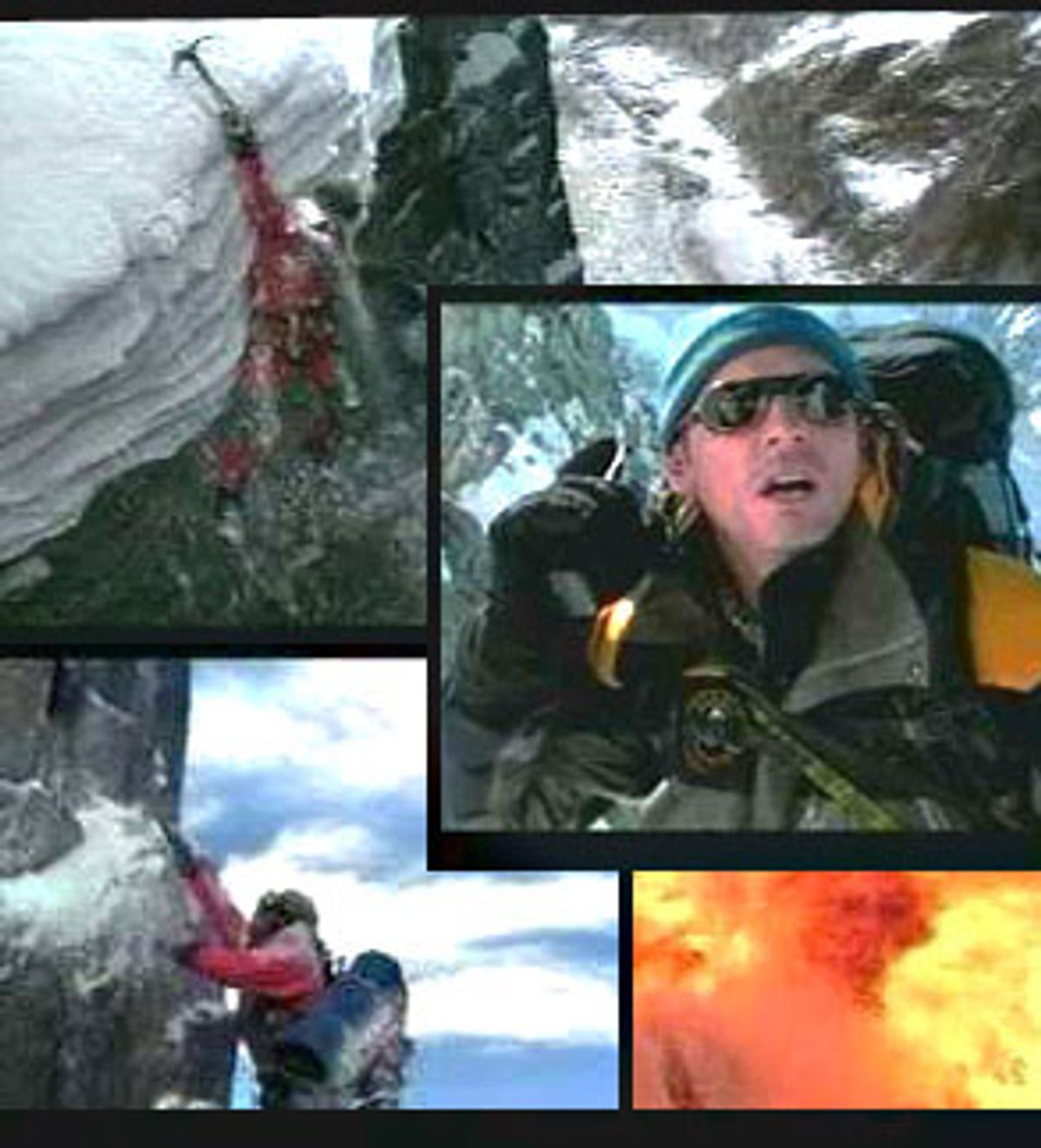 I'm scared of heights. I'm so terrified that I can remember, perfectly, holding on to the arms of my seat during a trailer for one of Disney's "Love Bug" comedies. It featured a relatively prosaic scene of Herbie, the VW, riding along the cables of the Golden Gate Bridge, the San Francisco Bay far, far below. That was 26 years ago.

Just a couple of years back, when Hitchcock's "Vertigo" was re-released, I was lucky enough to see it on the huge screen at New York's Ziegfeld Theater, and Jimmy Stewart clinging to the gutter at the movie's beginning had never seemed so terrifying.

So you can imagine my delight at having to review a mountain climbing movie, for chrissakes. But if I hadn't been cringing and squirming while various characters clung to sheer rock faces or dangled by their axes over yawning chasms, there wouldn't have been anything to occupy me at "Vertical Limit." Perhaps the oddest thing about this mountain-climbing adventure thriller is how sane and conventional it seems. And that has to be a drawback for a movie about what's essentially an insane preoccupation.

Now before you vent your "because it's there" and "triumph of the human spirit" and "man's need to challenge himself" defenses on me, let me warn you, it's not going to do any good. I can understand the thrill of accomplishing what seems an impossible task, but I still think mountain climbers are nuts. When I read Jon Krakauer's "Into Thin Air" the only comparison that seemed to fit the climbers in that book were the junkies in William S. Burroughs' writing. These were people risking their lives for a high and the crazier the risk -- like climbing without oxygen, the uncut skag of the sport -- the purer the high.

If "Vertical Limit" had acknowledged the seductive insanity of mountain climbing (the way Krakauer does) the movie might have had some real oomph. Especially when the climbers are forced into the horrendous pragmatism that surviving a climb necessitates. But the lead of "Vertical Limit" is Chris O'Donnell, who could probably be just fine in light comedy but simply doesn't radiate anything driven or obsessed.

To be fair, a Rotary Club president might be sent round the bend by the dilemma that faces O'Donnell in the movie's opening: a horrible accident on a family climbing trip that kills his father and estranges him from his sister (Robin Tunney). The picture takes up a few years later when O'Donnell is shooting nature photos for National Geographic and his sister, now a famous climber, is working on an expedition to take a thrill-seeking skadillionaire (Bill Paxton) to the top of K2.

Needless to say, as they write in Penthouse Forum, the businessman's arrogance spells disaster for the expedition, and Paxton, Tunney and the group leader (Nicholas Lea, Krycek on "The X-Files") wind up stranded in an icy crevice at 26,000 feet with only hours between them and pulmonary edema. O'Donnell leads a rescue party intending to blast a hole in the crevice and pull the survivors to safety.

To make the big boom, the rescue party carries containers of nitroglycerine, a device shamelessly lifted from the 1952 French classic "The Wages of Fear," where drivers have to transport trucks of the jittery chemical over bumpy jungle roads. But in that picture you feel every jolt and crevice. Here, the nitro is all but forgotten until director Martin Campbell needs to make his thrill quota.

Instead, the movie focuses on so many of the characters' personal tragedies and neuroses that it becomes a little like a mountain-top "Grand Hotel." That may sound fun but Campbell doesn't have the instinct for soapy trash to give the premise some juice. (There's even an icky sub-theme about brotherhood.) More disappointingly, he doesn't show the brio and bracing good humor and craft that made his last picture, "The Mask of Zorro," one of the greatest and most rousing Hollywood adventure movies ever. The picture cuts from story thread to story thread, and in such a choppy fashion that we're rarely given the vistas that would allow us to take in the physical layout of the action.

The cast is mostly wasted, including the great Indian actor Roshan Seth (he was the father in "My Beautiful Laundrette") as a Pakistani colonel. Paxton doesn't get to do more than sneer and look craven, which negates his best qualities: his wild humor and the empathy he can bring to the roles of ordinary guys caught in untenable situations (as in "A Simple Plan"). Steve Le Marquand and Ben Mendelsohn have some funny moments as a pair of Australian stoner-climber brothers. And though she has nothing to do, I was happy to see Izabella Scorupco again. In Campbell's entry in the James Bond series, "GoldenEye," Scorupco was just about the brainiest Bond girl ever. Judging from that performance and her presence in the role of camp medic, she has a gift for transmitting a sharp intelligence. Now she just needs the role that would give it full rein.

Everyone in the cast takes a back seat to Scott Glenn as a legendary climber who's become a sullen recluse after his wife was lost in a climbing accident. That's one of the movie's personal-tragedy subplots, but Glenn, his face competing with the mountain itself for the most expressive crags, brings a sense of loss that the movie's inadequacies don't obliterate. He seems the only person here clued into the price and stakes of what the other characters are playing at. "Vertical Limit" wants to be a dizzy, precarious thrill ride. Glenn provides the only gravity that doesn't seem dull, literal and earthbound.