In defense of a double D

They may be massive, but I'm not lopping off these babies. 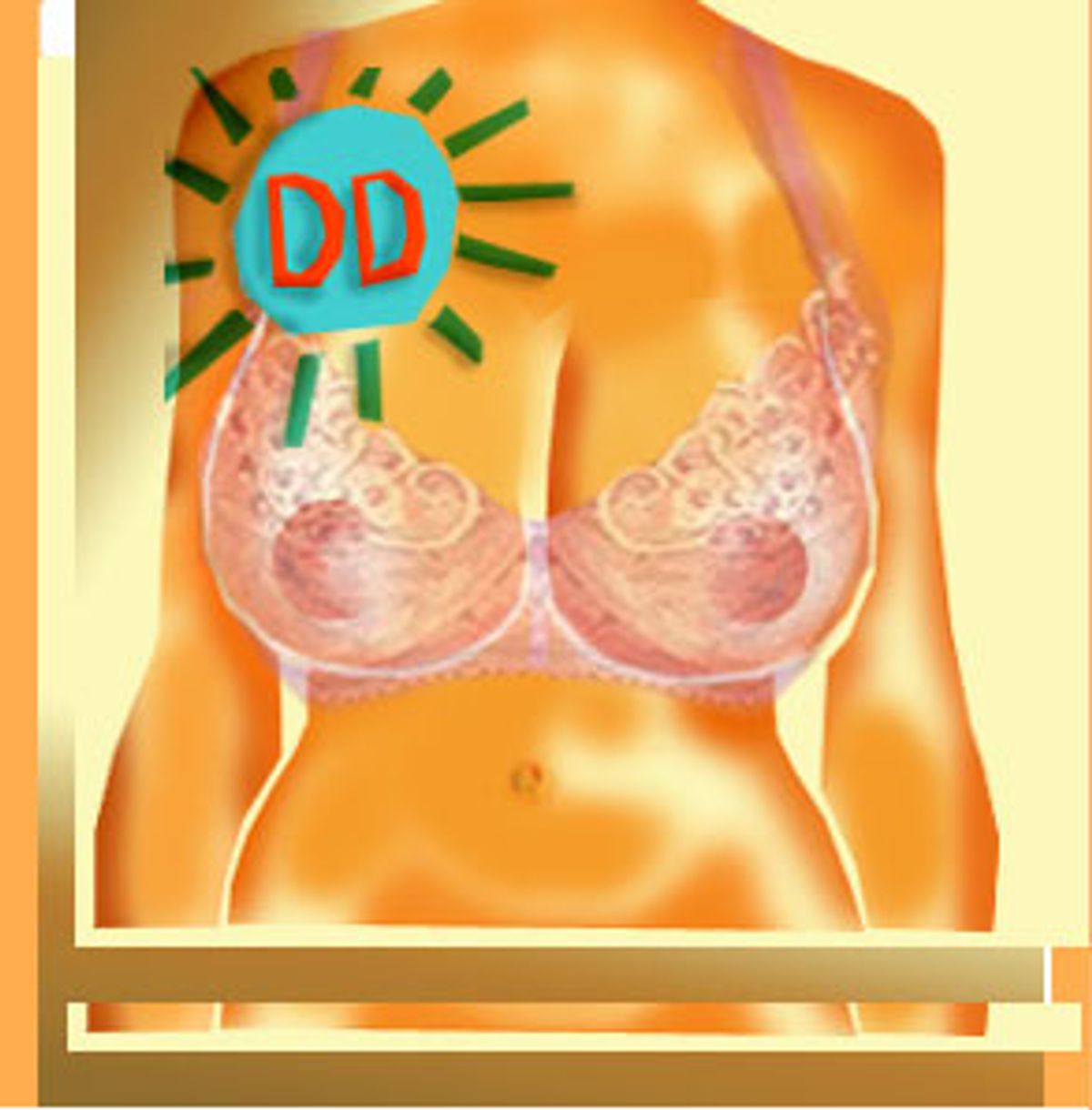 My roommate's bra hangs quietly on the bathroom doorknob. It's a placid little thing. All lace and skinny straps, it lingers as lingerie should. Even her black brassiere is an innocent item. Its sheer fabric whispers only sweet nothings. I look at the monster I've just pulled off. The cups smile, huge and gaping. Instead of hushed secrets, my bra shouts out big words: mammaries and maternalism. Its attempts at coy femininity -- an off-pink shade, a wee bow -- are utterly unconvincing. I've seen less fabric in a sweater.

I survey my naked assets. There really is no good name for them: "titties," "boobs," "bosom," "chest," "breasts" -- all these monikers are either too clinical or too comical. Although generously sized, mine are not the fantastic pneumatic spheres possessed by comic-book heroines, but neither do they sag near my navel. Their tops slope down and the bottoms curve up from their resting place on my rib cage. Most of the middle is dominated by my nipples, which usually spread out wide and relaxed but with a mere touch of the bathwater perk up to attention. As I ease my way in, my breasts bob up, floating to the surface like bath toys. Today, I don't feel like playing. Today, I'm considering lopping them off.

Men may be taken with them, and some women may implant bigger ones, but when it comes down to it, having big boobs can be a big pain. (No, I don't mean actual physical discomfort. That, for now at least, is thankfully not an issue.)

I try on clothes and none of them button closed in the front. I borrow my friend's "cute" top and on me it turns "revealing." I wear a baggy T-shirt and my breasts take up my entire torso. I wear a fitted one and co-workers make comments.

And don't get me started on bra shopping. Judging from the selection, it seems that bra designers believe that no woman with double D's was born after 1950. They create contraptions meant to maximize one's profile by squishing tits into weird Estelle Getty-esque cones, or try to minimize cleavage with devices that push one's breasts all the way into one's armpits. Wearing a sports bra results in the uncomfortable and unflattering uniboob look -- a monolith of flesh, an Ayers Rock rising from the chest. "Full-figure" bras are the modern-day corsets: Straps stretch the width of your shoulders, snaps cover half your back and there are enough constructive devices to support a minor bridge. Sleeveless tank tops and any neckline that dares dip below your collarbone are strictly forbidden.

Of course, I have options. With the help of modern technology, I could do away with all of this. I allow myself to consider the possibilities. How nice it would be to fit into the things I like, rather than have my cup size define the things that fit me. I could put on a bra with a single snap of my wrist, or even feel comfortable not wearing one at all.

About 70,000 breast reductions are performed each year in the United States. Punky Brewster, Star Jones, Roseanne Barr, Kim Fields and other (formerly) amply endowed celebrities have all publicly extolled the virtues of surgical reduction. I've read interviews with women who swear that reducing their rack decreased their self-consciousness and improved their self-confidence. I know at least three women who have undergone the procedure. Not one of them has ever expressed regret.

I stand in front of the mirror and push them flat. Is that how I would look? Would my waist look bigger? My shoulders straighter? Would I end up with huge scars? Or reduced sensitivity? Would I miss the cleavage, that undeniable oomph?

I tell my friends that I'm thinking about getting a boob job. Their support is unanimous and unwavering. They know I've considered it before and they have heard the happy testaments of friends who've already had it done. They are good friends, more supportive than my most high-tech bra.

But I can't sleep that night. I tuck my breasts between my arms and my chest. Slowly, I realize I'm hurt. I'm angry. I'm mad that everyone, including me, assumed that my reasons for wanting smaller breasts were as simple as being able to wear a small bra.

Even if I set off electrical storms when I walked, my friends would not allow me to complain that my thighs were too fat. Knowing that I'm healthy and active, they would call me silly, tell me I was beautiful and demand that I get over it. So why did they unanimously agree that my boobs were massive enough to warrant surgical removal?

When my friends gave me their ringing endorsement of breast reduction, I took it to mean, "Yeah, you're right, they're friggin' huge." I'm not saying my friends should lie and pretend I'm a B-cup, but if they had pronounced reduction unnecessary and told me to get over it, I would have been much quicker to fight my insecurities and dismiss a butchering of my breasts.

Why does breast reduction meet with social approval while liposuction and tummy tucks are still considered vain? Aren't all of them really about taking the surgical route to self-esteem?

It would be one thing if I was complaining that my breasts caused chronic back pain or other physical discomforts. But my discomfort with the size of my breasts is basically an issue of psychological discomfort and general inconvenience. For me, breast reduction would be essentially cosmetic surgery.

I have a mole that people always excuse for ink on my face. I've got skin that tans easily. Likewise, I have breasts that strain the most giving of T-shirts.

And fuck it, I would miss them if they were taken away. I enjoy the power they garner. I like how they fill out fitted T-shirts. I like how they enchant the men I'm with, as if they were casting sorcery or singing a siren's call. Seduction is a cinch. I don't wear V-necks to my navel, but neither do I wear muumuus.

I'm not against anyone else reducing her rack. I don't presume to know what will give another woman self-confidence. But big or small, empowerment should not lie in the size of one's endowment.

In the morning, I wander naked from my bed to the closet. I look through the mass of material and pick out my red underwire. I shorten the straps and pull my babies high. I still harbor yearnings for the ease of my roommate's wee bra. But my own breasts perch there, reflected back to me in the mirror, pressing against each other like allies.