The day I killed my dot-com

The dismal reality of layoffs can be just as hard on the person who wields the ax as it is on the employees who are fired. 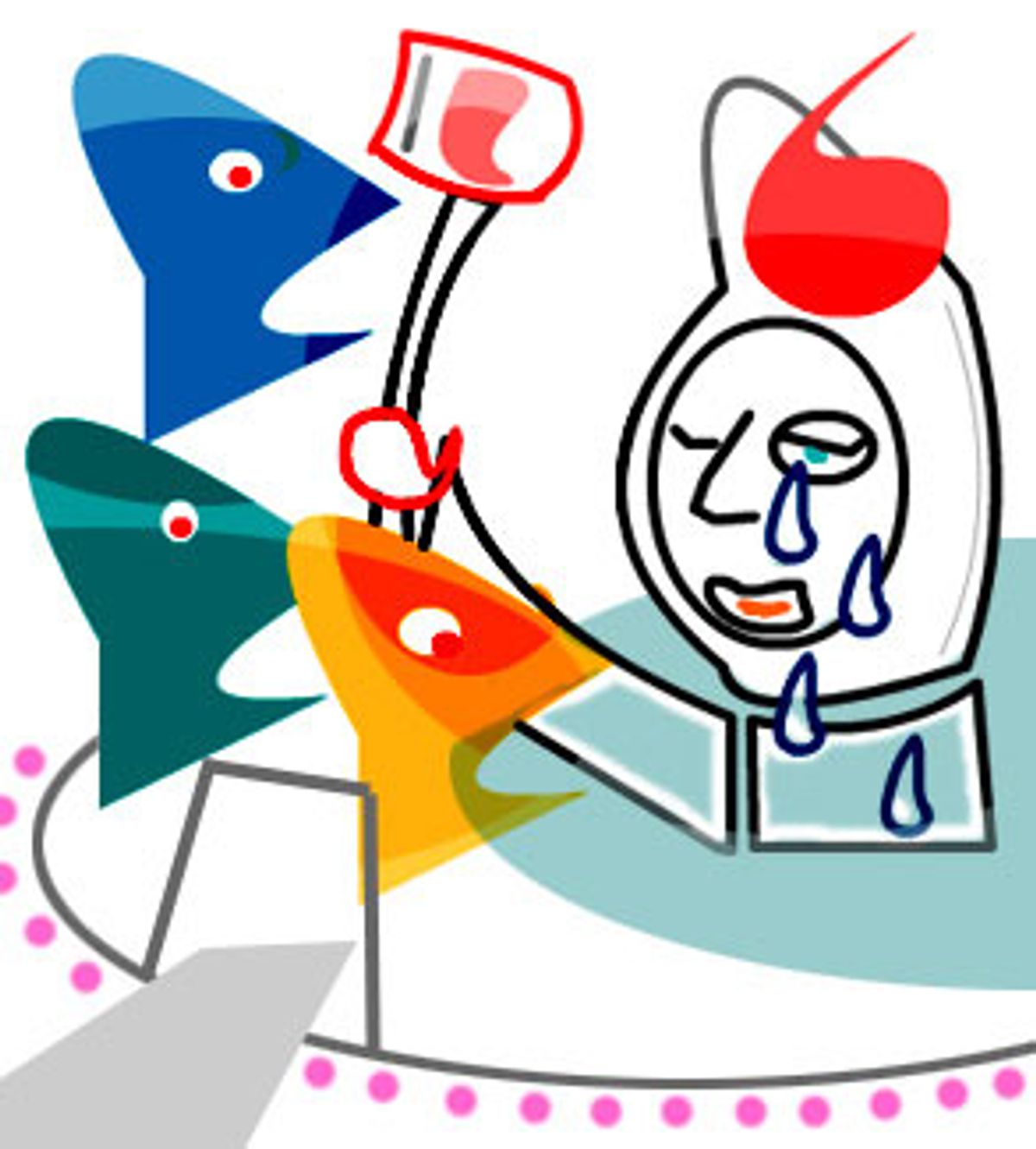 On a Monday morning just five short weeks ago, I had to tell my employees that they didn't have jobs anymore. I felt like a devious conspirator as I walked into the office that day. The sun seemed overly bright, streaming through the windows and giving the place a cheerful air that was altogether inappropriate for what was about to take place.

There had been an argument the previous week between me and my two co-founders as to when we should break the news. I voted for Friday and they for Monday.

"Never tell people on a Friday," they said. "It doesn't do them any good; they'll have a horrible weekend. If we tell them on Monday, then they have a fresh week in front of them to look for new jobs."

So our erstwhile employees were spared the horrible weekend, but I was not. The reality of what was happening to the company that I had worked 18 long months to build was finally sinking in. Our ambitious plans to change the ways in which people communicate online were not to be completed. They were thwarted, halted, aborted. I never thought that my company would be one of the unlucky ones; I was convinced that we were strong enough to withstand the backlash of dot-com paranoia and vanishing investors. I was wrong.

I lay awake at night, rehearsing the phrases we would use:

"As you know, we've been working on raising Series B funding for a couple of months now."

"Due to the horrible market conditions and the fact that we aren't at revenue yet, we haven't been able to raise the money needed to keep the company operating."

"We can't make the next pay period, so off you go."

I agonized over what the employees' reactions would be. I feared tears, outbursts of anger, accusations of leadership gone awry. I had watched the TV interviews with disgruntled employees of failed start-ups. I had read the message board postings of those freshly ejected from flailing new-economy businesses.

The disillusioned are not a happy bunch: They hiss about inexperienced management, worthless stock options and too much overtime. They're bitter because the rainbow they followed didn't lead to a pot of gold and now they have to retype their résumés and hit the road. They inevitably recall the job offer they should have accepted instead -- with a company whose IPO looked like a shoo-in.

They don't tell the interviewer about the Free Lunch Fridays, the fat health benefits or the liberal expense accounts. They fail to mention how seriously their input was valued and the myriad ways in which their ideas were empowered. Instead, they bellow and blame, anxious to share with the world how they've been wronged.

Vivid speculations abound as to what happens after a start-up closes. Rumors are spread about CEOs who get golden parachutes and entrepreneurs who leave with pocketfuls of cash. The laid-off worker imagines a scene in which the founder of a has-been company spins out of the parking lot in a new Porsche, singing "Satisfaction" and planning a vacation to the coast of Spain.

And so it was with great trepidation that I faced that Monday morning in October.

We three founders had previously nixed the idea of a companywide meeting to make the announcement. The thought of seeing 40 faces simultaneously crumple with disbelief was too much for us to bear. On the other hand, telling people one by one would be even worse.

We decided to gather small groups together, by department. That way, we reasoned, people would have their close colleagues at hand and would still have enough personal space to digest the information. More important, we hoped that our thin veneer of bravery would hold up.

The first group came in quietly, sensing that something was wrong. We fidgeted, cleared our throats, straightened up papers on the desk.

I kept thinking that someone was missing, someone who was more competent, who could do this the right way and make everything better. Who were we to do something this grave, after all? Rookies. Dreamers. Losers.

The carefully rehearsed words didn't flow smoothly and instead came out sounding like a campaign speech by Al Gore.

"The unimaginable has happened: The term sheet fell through, so we didn't get the funding we were counting on."

"You've all done a fantastic job, but we didn't quite make it."

"We're just as shocked as you are."

Included in the first group was employee No. 5, who had been with the company almost from the beginning. She helped me pick out the Ikea office furniture; she accompanied me to Costco for the first load of sodas and pretzels for the kitchen; she spent hours planning the open house. She got to the office early and stayed late, and was the company's biggest cheerleader. She liked to talk about what could happen when the company made its IPO and we all became rich.

The news shocked her. Her eyes widened and then filled with tears. I handed her the tissue box before I looked away. There was nothing comforting to say; I felt small and incompetent.

An invisible barrier arose in that room in the space of just a few moments. Where all of us had previously been on the same side, now we looked at one another from across a chasm. It was us vs. them now.

There were questions of final checks (soon), severance pay (none) and the possibility for a miracle (slim). There were expressions of frustration as to why we didn't give them more warning, why we had maintained optimism, why we hadn't done more to preserve the company.

What happened, exactly, to this brave new world that so many embarked upon with such enthusiasm? No one seems to fully understand what happened to the Internet economy in the year 2000. Everyone has different opinions, all possessing varying levels of plausibility. Someday in the future, people will write detailed accounts of these times, the years that the Internet expanded and contracted like a burgeoning New World. They will posit and theorize, and perhaps they will find bits of truth.

Whatever these future historians decide, no answer will entirely suffice. A certain kind of violence is inherent in birth, and dizzying highs and lows must occur before equilibrium is reached. Miracles and injustices happen in equal measure. We had done everything we could think of to do, but it hadn't been enough.

The rest of the meetings that day crawled by at a painful pace. The words always sounded clumsy and awkward; the sentiments never seemed authentic. I felt suspended in some kind of mental purgatory that demanded that I experience the collective disappointment of each and every person there.

That day I wished I didn't know anything intimate about my employees. I wished to know only their names and their titles, nothing else. It would have made the ending so much smoother, like a crisp transaction, cool and metallic. I could have gone home and slept peacefully that night, rationalizing that the state of the company was due simply to the downturn of the market.

But I did know. I knew that my V.P. of engineering dreamed of moving his wife and tiny daughter to the South of France. I knew that the elderly parents of my Russian database architect depended on the money orders he sent across the ocean every month. I knew that one of my senior managers hoped to move his young family of five children out to a farm with horses and chickens and apple trees.

My own dreams seemed trivial before this tapestry of family plans and lifelong ambitions and children's college funds. I knew that my employees understood the risks when they signed up: Start-ups are fragile and prone to disaster, so proceed with caution. And yet these bright, smart people who could have worked anywhere had chosen my company out of all the others, and I loved them for it. They had claimed the company's vision for their own. They weren't afraid to question assumptions or present new ideas. And yet.

We are. We were. We have been.

It ended far too soon -- before we accomplished what we set out to do. Our innovative software wouldn't land us on the cover of Wired magazine. Our ideas for revolutionizing online interaction would never be completely tested. There would be no farms, no houses in France, no six-month backpacking trips. Not this time.

My employees had to pack up their desks that Monday and go home. They were hurt, bewildered and upset. Office doors flew shut for the last time, phone calls were made, e-mails sent. Eventually I helped them load their personal belongings into boxes and walked with them to their cars. We hugged. The elevator stopped pinging open and shut, and the halls became quiet.

Going back the next day was awful. The hardest job had been completed, but what remained was tedious and sad: creditors to call, investors to brief, equipment to sell.

It was eerie to walk into empty offices and see chairs still arranged helter-skelter and scribbles all over the whiteboards, the ghosts of an impromptu meeting. The kitchen refrigerator still held brown paper sacks with initials on them, and the UPS delivery person still arrived on schedule with an armful of boxes. It felt like we had been vandalized, robbed of something precious and vital.

After days of cleaning up and putting away, my co-founders and I left with exactly what many founders of failed start-ups leave with: nothing more than the experience. No parachute. No Porsche. No paycheck.

My former employees quickly found jobs with wonderful companies. I'm envious of their new employers because I know how valuable they are. I wish we had made it to the end, had finished what we started. But we didn't, and that's the reality of this spasmodic industry.

The author chose not to reveal the name of her startup, citing legal issues related to the process of closing down the company and settling with creditors.

Jennifer Jeffrey is the former vice president of product development and co-founder of a now defunct dot-com.