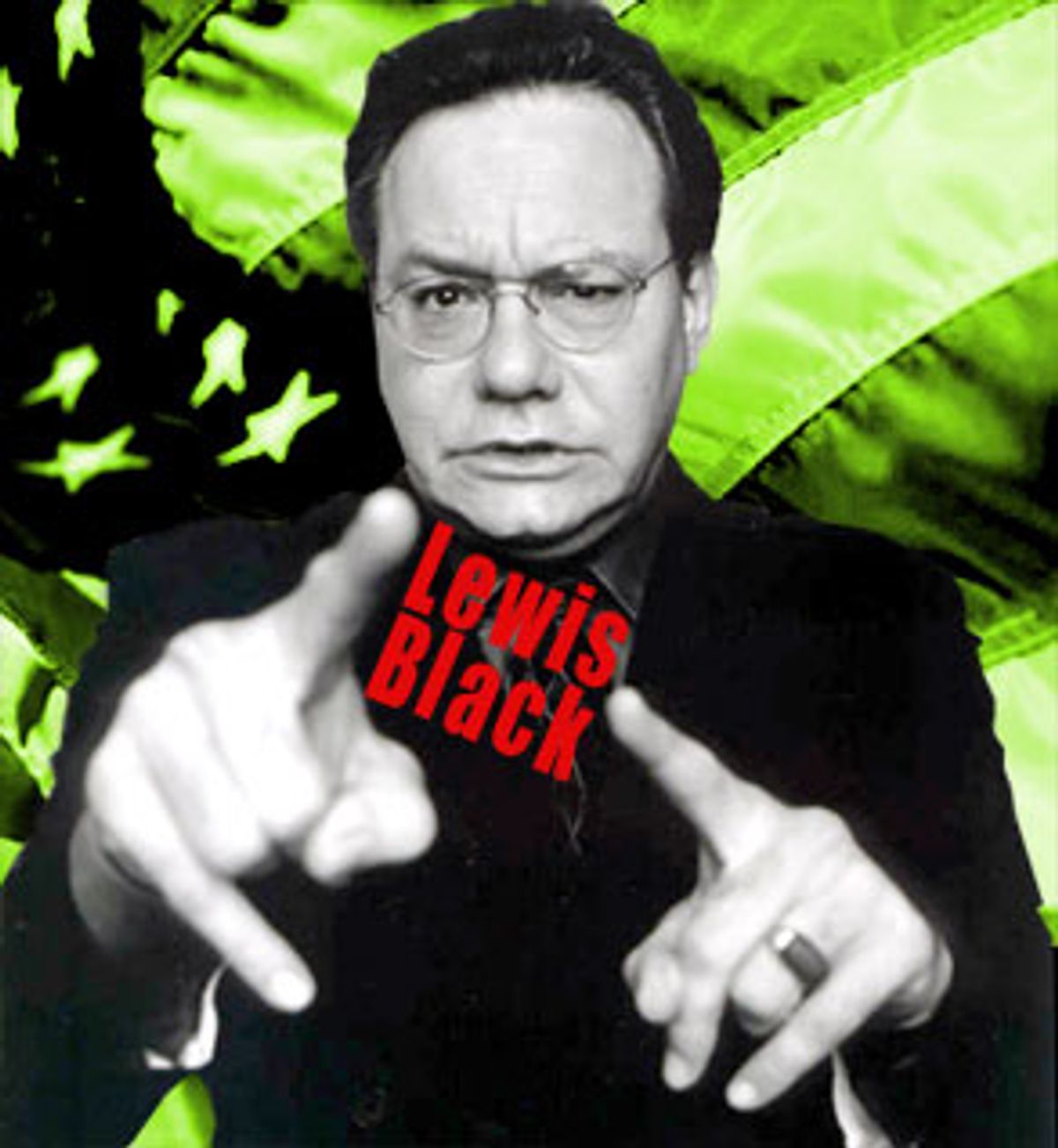 Watching Lewis Black perform live is like watching a schizophrenic having a mental breakdown -- you're not quite sure whether to laugh or run. Stuttering with Tourette's-like constipation, his twitching fingers splayed to their contorted ends, the comedian is an aneurysm waiting to happen, an apoplectic fireball burning with cynicism, contempt and misanthropy. From weathermen to the White House, no individual or institution is exempt from his harangues.

Best known as the acid-tongued correspondent from Comedy Central's "The Daily Show With Jon Stewart," Black manages to stand out among other comics with his subversive, distinctly manic personality. He also has brains. He's a playwright and a graduate of the Yale School of Drama. But unlike fellow ranter Dennis Miller, who uses smug references to show off his intellect, Black vents with the exasperation of an everyman. His cathartic routines -- performed live, on television and on his CD, "The White Album" -- are literate without being esoteric, didactic without being condescending.

I recently sat down with the grumpy gadfly prior to a sold-out show at the Gotham Comedy Club. If he's irascible onstage, he was perfectly affable and generous off.

I'm going to give you a few names and I want you to tell me the first word that comes to mind:

The only Jewish girl I know who gave a blow job.

Being in an industry that promotes diplomacy, have there been any professional repercussions to being so honest?

Early on as a writer, I met [former segment producer] Frank Gannon, who was doing Letterman -- a great guy. He said, "The good news is you're really intelligent. The bad news is you're really intelligent." Then I found out that he was a speechwriter for Nixon and I said, "That's like telling me you've worked with Himmler." He laughed out loud, so I know he got it, but I also know it's not the thing I should have said.

One of the reasons I didn't do as well in the theater community is that I told people to go fuck themselves and I shouldn't have. You have to learn that part of the job. You have to smile and nod your head and not say anything. I've never really been good at it. My advice to any young comic is -- when in doubt, don't drink.

You're very critical of the state of American culture, especially when it comes to our political system. In your professional opinion, where in God's name did we all go wrong?

Part of it is education. I really believe that the bottom line of the culture is education. They can talk about family values and all that crap all they want, but it's a matter of how you transmit knowledge from one generation to the next, and we're not doing it anymore. Now don't tell me you can't come up with an educational plan you can speak about passionately that we will understand.

These people out there are not stupid. I don't know why there's a certain gutlessness to both parties, why it's so difficult to speak your mind. This society has grown tenfold and I don't think the leadership has grown at all. If we're gonna teach kids wood shop, I think leadership training skills should be taught since I don't think these people know how to lead.

With so many worthy targets out there, who has given you the best material?

Dan Quayle -- because he was so consistent. He was unbelievable. I had almost 50 minutes of material on him.

How do you think we ever got to a point where people like that could get into office?

The media has scared a lot of people out of the business. People don't want to talk about their lives, the way they're being exposed. Like in the case of [former Texas governor] Ann Richards, who I have a great amount of admiration for, she loses to George W. Bush 'cause she's honest, so they pick her apart. Once you start becoming honest they pick the shit out of you -- unless you're Jesse Ventura, who's very, very honest, but isn't really saying anything.

If you were the emperor of Rome and could throw one person to the lions -- who would it be?

It would've been Newt Gingrich, but at this point I'd have to say Trent Lott. He's a moron.

When did you first realize you had the talent to make people laugh and get paid for it?

Basically after killing myself. Actually, I was shocked when I found out I could get paid for it, cause I always did this for fun. This is as much fun as being paid could be.

Did you initially get discovered, or did you have to go through the whole rigmarole of finding an agent?

Oh, Christ -- it was a combination of it all. I ran the West Bank Cafe Downstairs Theatre Bar and opened every show that we did for eight years. That room really shaped me and then the folks at Catch a Rising Star saw me and got me on the road. Then from there, I'd stumble onto other work. I had an agent from the beginning, thanks to the writing, but even when I started going on the road it was hard to find someone who would book me. I was really on the road for like eight years ... just really lonely.

So you're a glutton for punishment?

I think anybody is who chooses to go into a profession where you learn by failure -- unless you're a natural. The real punishment is the business of it. It's like a salmon going upstream -- you hit the rock, you hit the rock and then finally you go by the rock, and you don't really know why.

Even after all these years, do you ever fear tanking on stage?

Only if the situation is wrong -- if I'm at a corporate event or in one of those idiotic Holiday Inn conference rooms. I once did a thing for Muscular Dystrophy in Amarillo, Texas, and I was literally 30 yards from the audience in a room that was probably 80 yards wide. Even when it was silent, it had two waterfalls going -- so you know you're gonna die. You just go up there and die.

Your expressive delivery style is very unique -- did it come naturally to you?

Yeah, it was ultimately very natural. It would've been nice if I'd known it [laughs]. It's what I was really like as a kid, the personality I had when I was angry. For me, I had this persona that was part of me and I brought it on stage only to a point. Once I took it to the next level, myself to the seventh power, then it really worked.

Here's a Barbara Walters question. If Pfizer created a "happy pill" that could get rid of all that rage you project in your act, would you take it?

Traditionally, stand-up comedians often transition into television. If it meant watering down your persona, would you star in your own sitcom?

Well, if it was an interesting character. All of my training leads to the next step to be that. I was a playwright and I worked in theater and I'm a comic -- all of that ends up being vaudeville and that's what a sitcom is. There's a point where you do this for a long time and you want to work with other people, so I've written stuff for myself and done all of that. I've been through this process. [Frustrated grunt.]

Why do you think Hollywood has taken so long to appreciate you as a commodity? Is it finding the right vehicle? The right talent?

I don't know what it is. You got everybody and your mother saying, "How come you don't have a sitcom yet?" And you think, "Well, I don't know if it's my agent, my manager, if it's me." The first time [I was commissioned to write a pilot], I would say that CBS got this script on Friday. By Monday morning, after having the script a weekend, CBS passed on the script. I don't believe CBS ever read the script. Then a year and a half ago, NBC Productions hired me to do this thing and Warren Littlefield was fired by NBC -- and that was the end of my sitcom. That has happened about every two years.

Do you ever get the sense that Hollywood execs are too shortsighted to see the bigger picture?

What I find astonishing is how many times it takes them to see certain people to get it. A lot of the people I've had to meet had to do none of the preparation that the professional within the business has to do. The person who's standing in the spotlight has to do all this preparation and these people have to do nothing but learn how to go to a cocktail party. You know, reading would be nice. It's unconscionable.

How has your stint on "The Daily Show" affected your career?

Huge. This [Gotham show] sold out and they're already selling tickets for the next. It's insane. I'd come out here on a night like this two years ago and there would be half the room filled.

Even with all the success you've had, are you still angry?

But isn't that just the nature of the beast?

It may be the nature of the beast, but the beast is wrong. At some point if you stick to your guns hopefully you change that. I mean, I was sitting here watching [Sam] Kinison, who's an angry guy. Here's Steven Wright, who's a bright guy. Here's Bill Hicks, who's an angry guy. When I saw these guys, I felt like I was somewhat within the category of that. Then you go to take your turn and they go, "Well, you're a little too edgy. You're a little too intelligent." Well, hello ... it works!