"One Drop of Blood" by Scott L. Malcomson

In a panoramic study of American racial reality, whites, blacks and Indians jostle for position from Colonial times to the present. 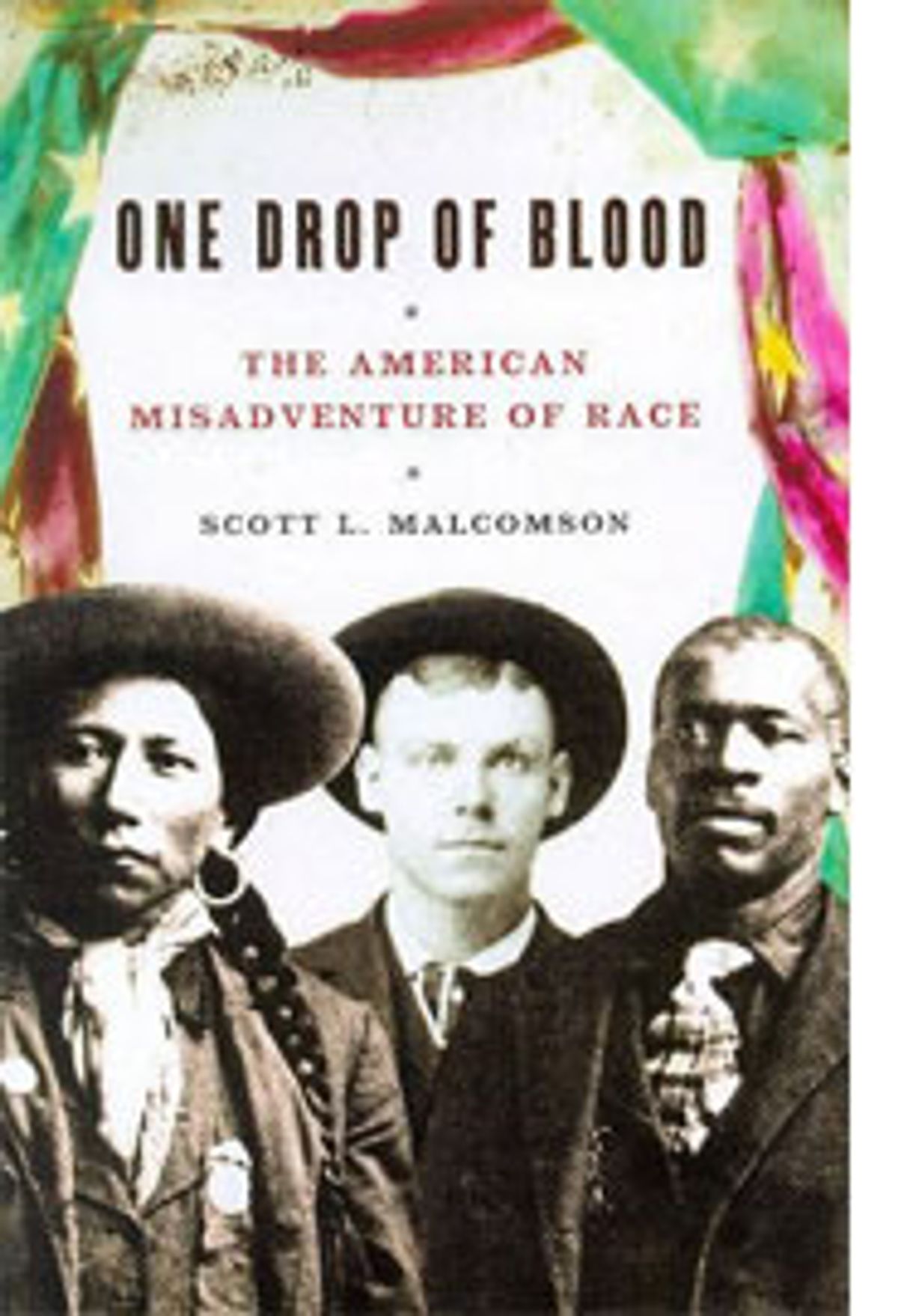 There's a reason "One Drop of Blood" is as long as it is. And it's not a good one. There are several books hidden within this bloated volume, only one of which bears some news.

Scott Malcomson is a terrific writer who certainly means well, and his subject, the damnable racism at the heart of America, unquestionably remains the central moral and political issue confronting the nation. A former editor at the Village Voice and author of two astute books on ethnic and political clashes abroad, Malcomson here exhibits an enormous and subtle intelligence and an even bigger heart, but the book has serious flaws.

Focusing here on his hometown of Oakland, Calif., he portrays a city haunted by racial nightmare. The Ohlone Indians made this land their home until they were devastated by white settlers late in the 19th century. Midway through the next century, the right-wing Knowland family ruled by publishing the Oakland Tribune and sending William Knowland to the U.S. Senate, where he was majority leader under President Eisenhower. As the city grew steadily blacker in the '60s and whites fled to the suburbs, Oakland spawned Huey P. Newton and the Black Panthers.

Malcomson observed much of this as a child. His mother and father, a homemaker and a Baptist minister, were white liberals active in the civil rights movement. His hero was local boy Jack London, writer of adventure tales, socialist advocate and, Malcomson belatedly discovered, chest-thumping racist. During boyhood, Malcomson's pals were a remarkably diverse bunch, but as he moved into junior high he and his black friends began to drift apart. More and more, he hung out with Chinese boys, practiced martial arts and idolized Bruce Lee. "I suspect I chose Chineseness," he writes, "in hopes of keeping my denial and acceptance of race in suspension."

But eventually there was no denying his "becoming white," with all its implicit privileges. As an adult poking around in his genealogy, he learned that some of his ancestors were slaveholders and that one mixed-race relative, if she chose, could claim membership in both the Daughters of the American Revolution and the Cherokee nation.

The enigma of race viewed through the microcosm of Malcomson's Oakland is fresh and instructive. The ultimate subject is never the author himself but the light his experience sheds on us all.

Given these California origins and current American demography, it's surprising that Malcomson did not include Asians in so wide-ranging and ambitious a history. Perhaps he found the prospect too daunting. But without this perspective, there's no way the book can be considered what he apparently wishes it to be: a definitive accounting of the construction of American racial reality.

Oddly enough, Oklahoma rather than Oakland is the book's fulcrum. At the turn of the last century Oklahoma was a "laboratory of separatism" where blacks, whites and Indians each sought and failed to set up independent states: "One sought to go beyond race by escaping the reminders of one's own racialness, to 'separate' in order to become fully oneself and free. It was already too late. The history of the New World's three-part racial division stuck to Americans like a burr." The choice certainly suits Malcomson's additional theme of racial separatism as impossible dream, even as he admits that the state is "an extreme example."

Malcomson's treatment of Indians centers on the Cherokees. Their often-told story is heart-wrenching. No matter how much they became assimilated, educated and Christianized, they were going to be driven from their homelands and "removed" to Oklahoma, no matter what the cost in Cherokee lives and shattered culture. Casino-gambling wealth among the various tribes in our time he regards as obscene hush money intended to quiet the American conscience.

As the author traverses centuries of black-white relations, paradox is the key. By defending Caribbean Indians from Spanish exploitation, the 16th century Dominican friar Bartolome de Las Casas unwittingly cleared the way for black slavery. During the American Revolution, the founding fathers' rhetoric of liberty clarified the equation of slavery with blacks only. In our time, the segregated black church became the decisive social institution championing an integrated society. All telling points, but none is original.

The book's organization is unorthodox if not downright infuriating. To say that it tried my patience to slog twice through much the same material doesn't quite capture my desperate longing to fling this book across the room. In the section titled "The Republic of New Africa," Malcomson covers slavery, abolitionism and colonization, the Civil War, black codes, Jim Crow segregation, civil rights and Black Power. In "White Flight" he runs through the three centuries again, with only slight variations of emphasis.

Not only is it repetitious, but this misbegotten scheme fails to provide needed context. Take Abraham Lincoln, for example. The Great Emancipator's views on race, sketchy the first time, come into perspective only with the broader analysis Malcomson provides when he circles around again. Likewise for white theories of racial hierarchy, for black debates on integration vs. separatism and on and on. And any book on the American racial dilemma that reduces W.E.B. DuBois to little more than a footnote is scandalously deficient.

Malcomson is most astute when analyzing culture. His insights into minstrel shows, the Uncle Remus tales of Joel Chandler Harris and the relationship between blues culture and the '20s Harlem Renaissance are sharp-eyed and unexpected. Unfortunately, they play a small role in a book that resembles nothing so much as the graphic art of M.C. Escher. Circling endlessly, you can't tell where one of his drawings starts or stops.

In Malcomson's case, you want it to stop.