Mingling with famous mice in postures of debasement. 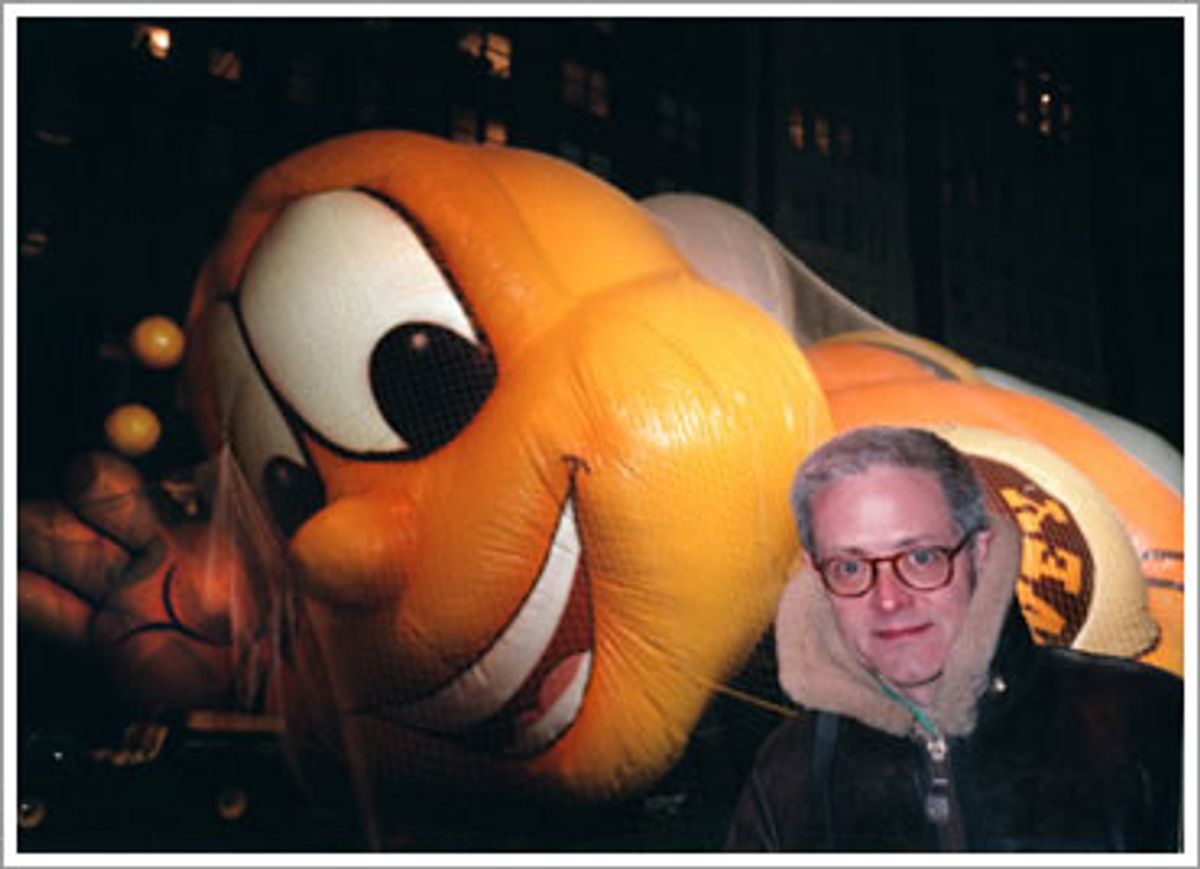 On the night before Thanksgiving, my friend Paul and I went up to the Museum of Natural History to watch the Macy's Parade balloons being inflated. Ever since I moved to New York in the '70s I'd planned to do this, but I always put it off until next year, and finally I decided I had put it off too long.

The museum sits in a small park bounded by Columbus Avenue, Central Park West, 77th Street and 81st Street. The balloons are inflated on the cross streets, facing east, from which position they move out on Thanksgiving morning, turn down Central Park West and proceed to Broadway, ultimately winding up at Herald Square in front of Macy's.

It was a bitterly cold night, but that hadn't kept thousands of people from showing up to see the balloons. There were scores of cops herding them in orderly lines past the huge things. We arrived at around 9:30 p.m. Paul, who lives in the neighborhood and always goes to witness the inflation, says that sometimes it goes on well past midnight, but this year it was pretty much done by the time we got there. Almost all the balloons were in a state of full tumescence.

They were moored in the air 5 or 6 feet above the pavement, held in place by their rope tethers and nets. They were face down, in postures of abasement. Even so, they had an air of life to them, as breezes moved them against their restraints. You sensed their tendency to rise.

In New York one is accustomed to radical discrepancies of scale, but it was still startling to see these creations up close. They range from about 50 to about 70 feet long and, laid on their sides as they were, close to the ground, still reached several stories high. They looked even bigger than they do on television, flying through the steep canyons of Broadway.

At the front of the queue, ready to lead the parade, were a couple of stars about 10 feet high and an ice-cream cone about 15 feet high. The ice-cream cone looked old, dusty and venerable, and very unappetizing on such a chilly night. Perhaps it was a veteran of many parades gone by, ready to guide the newer balloons and keep them from going astray.

My favorite balloon was Mickey Mouse.

Lloyd Fonvielle is a screenwriter who lives in Ventura, CA and New York City.