Blockheads like Mike Ditka can talk all they want about defense and running. With Kurt Warner healthy, the Rams can smoke anybody. 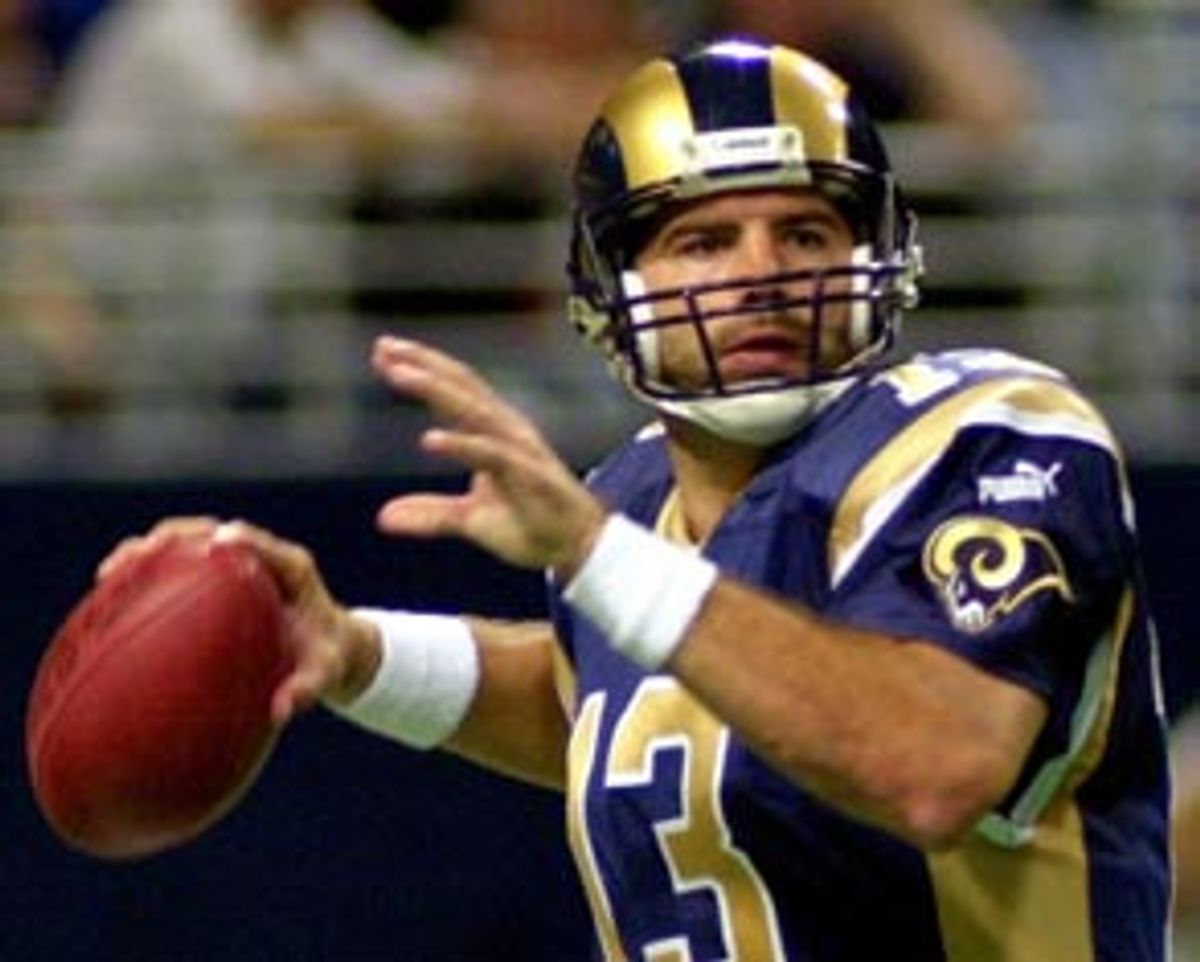 Trying to pick your way through the byzantine NFL playoff possibilities? Let me simplify it for you: If the St. Louis Rams get back in, they'll beat the crap out of everyone. Maybe not the Oakland Raiders, their likely Super Bowl opponent from the AFC, but everyone else up to the Raiders and maybe the Raiders, too.

The Rams' chances depend very much on beating the Tampa Bay Buccaneers, the team they beat in the NFC Championship Game last season, on Monday night. This won't be easy, particularly as the game is at Tampa Bay. But the Rams should win, and if they do they'll make hash out of their much more highly touted playoff opponents.

The only reason the Rams are in this tight spot in the first place is that Kurt Warner missed several games with a pinky injury, and yet the sports press has all but shut St. Louis out of the postseason prognostications. Why? Largely because the Rams win the wrong way, with passing, not the right way, with running, defense, kicking and field position, the way morons like Mike Ditka think they should.

You remember Ditka. He won his only championship in the 1985 season, in which his team had great running, defense and passing -- the only time one of his teams had great passing -- and concluded from that that he had won because of running and defense. Really, Ditka is no worse than most of the other stone-headed ex-coaches who comment on TV, he's just ... well, I take it back, he is worse. To paraphrase Dr. Johnson's remark on Lord Bolingbroke's dullness, Ditka isn't merely dumb, he is the cause of dumbness in others. You listen to Ditka and you get the idea that the object of football is simply to accumulate the most yards by running, not accumulate the most points. Not to win.

Well, the Rams play to win, and as they showed Sunday against the NFC team with the best record, Minnesota -- the team that seemed best suited to dethrone them as conference champs -- they're virtually unstoppable with Warner in the lineup.

The Vikings' Dante Culpepper had been touted by many, including Sports Illustrated, as the prototype for a "new style" (i.e., this year's model) quarterback whose running talents are supposedly as important as his passing. Culpepper played well Sunday, completing 21 of 33 for 221 yards, running for 37 more and leading his team to 29 points. His team was never in the game. Warner completed 27 of 32 -- only one of the five incompletes was uncatchable -- for 346 yards. The Rams have a lousy defense and a mediocre kicking game, but they didn't need them against the team with the NFC's best record; they simply moved the ball and moved the ball and moved the ball (they had to punt just once all day, and for a mere 38 yards) so much that the Vikings' defense was ready to collapse in the end.

In other words, a typical Rams performance under Warner.

The Rams do, of course, have a running game, a superb one, at least when Marshall Faulk isn't hurt. Faulk averages better than 5 yards a rush, which puts him in an elite class with running backs Jim Brown and Barry Sanders, and he's a terrific receiver -- one opposing defenses can't double-team. What he is not is what many football writers are touting him to be, which is the NFL's MVP this season. Use your heads, voters: Faulk was a terrific runner when he was with the Indianapolis Colts, but none of you noticed him because his teams didn't win anything. Now he comes to St. Louis, hooks up with Warner and proves to be a great receiver. Gee, think there's a connection there?

The victory over Minnesota proved exactly how much Faulk owes to Warner. Four times Warner completed passes inside the Vikings' 10-yard line for first downs, and four times the Rams let Faulk run it in from there. So, the next day four TDs show up under Faulk's column and not under Warner's. I'm not saying Faulk isn't a great runner. I'm saying that Warner's 346 yards passing did more to set up those TDs than did Faulk's 135 yards rushing.

I'm also saying that one of the reasons Faulk gets some of the yards downfield is that opposing defenses are already spread to cover the Rams' receivers. I mean, if you're an opposing defensive coach, how do you try to counter the game's best downfield passing game? Not by yanking defensive backs and inserting linebackers who key on the running back.

Warner is on an incredible two-year roll in which he has averaged over 10 yards per throw. That is the most amazing single statistic by an NFL player in our time, and no passer, not Joe Montana or Dan Marino and certainly not John Elway (who peaked in his final two seasons at about 7.5 yards per throw) has ever approached it. If football statistics were really understood the way baseball statistics are -- that is, if there weren't cementheads like Ditka around to drone on and on about the importance of the running game -- Warner's achievement would be seen for what it is: the equal of Mark McGwire's home run pace from 1998 through '99. Only, there is no Sammy Sosa and Ken Griffey Jr. in football for Warner to measure himself by. He's the greatest, and right now no one else is even close.

Move the fences in? Sure, A-Rod!

I guess it's just me, but if I was Seattle Mariners management, I'd have moved the damn left field fence in. I admit that Alex Rodriguez has proven to be an ego-driven jerk -- or at least he allowed his ego to be yanked around by his agent, Scott Boras -- but if I'm the Mariners all I would have been concerned with was deciding whether I wanted him to stay. If the answer was yes, and I didn't have to match the other team's highest offer, if all I had to do was move in my left field fences by 20 feet, I'd have been out there with a hammer and saw before the ink on the contract was dry.

Look at it this way: A-Rod hit 11 home runs at Safeco Field and 30 in other parks. Obviously, Rodriguez and all my right-handed hitters would benefit. I'd sell more tickets. Fans would be happy. Where's the bad news? And why should I refrain from doing this simply because it gratifies Rodriguez's ego? Many teams tailor their teams around their ballpark's characteristics. I see no reason why you can't tailor the park a bit to favor the players' talents.