All I wanted was the Toas-Tite sandwich maker and the secret to joy. 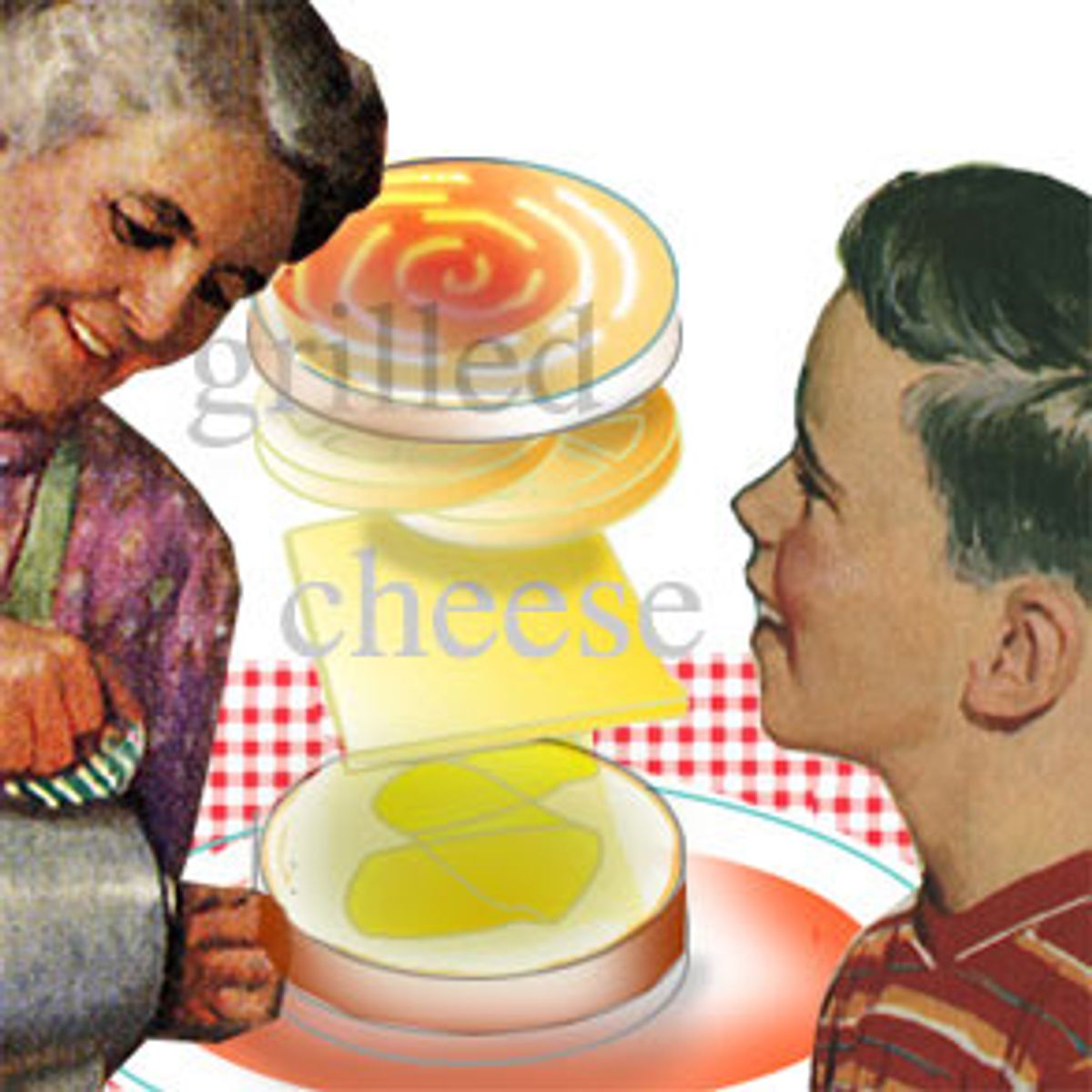 When my grandfather passed away I told my mother I wanted just one treasure from my grandparents' estate: the Toas-Tite sandwich maker. I'm sure I was the only grandchild to make this request. While sorting through half a century of my grandparents' belongings, my mother eventually unearthed my inheritance. On that day I became a rich man.

Almost 16 inches long, with a round four-and-three-quarter-inch sandwich holder at the end, this kitchen collectible was the wellspring of hundreds of perfectly circular grilled cheese sandwiches made by my grandmother in her Cedar Rapids, Iowa, home. Manufactured sometime in the 1940s by Bar-B-Bun Inc. of Cincinnati, the Toas-Tite has two black wooden handles held together with a metal loop on the end to keep them closed and, well, tight. The face of an almost hysterically smiling woman adorned the cover of the manufacturer's original box. Next to the happy chef was a sales pitch: "Make a luscious sealed in hot drip prof [sic] toasted sandwich." "Prof" stood for "proof," I imagine, and "hot drip" meant lots of saturated fat.

The beauty behind Toas-Tite's unique design was that it allowed the user to make grilled cheese sandwiches, toast and hamburgers over an outdoor campfire or, in my case, over a gas flame in Grandmother's kitchen. You buttered two slices of bread, fitted them into the Toas-Tite, placed thick wedges of Velveeta inside, closed the Toast-Tite, looped the ring around and then cut off the excess edges of bread. As the sandwich cooked over an open flame, circular rings from the aluminum casing pressed into the bread, giving the finished sandwich the look of a flying saucer.

Spiral designs on food were magical to a young kid from the South Side of Chicago with his head in the clouds. Each year, my mother, exhausted from the rigors of single parenting in third-story walk-ups, would ship my brother and me off to Iowa for the summer on the Empire Builder, a train with exotic destinations like the Rocky Mountains, Seattle and Portland, Ore. We only got as far as the pastoral hills of eastern Iowa, where my grandfather would be waiting, a tall, gruff man with a flattop haircut and a half-lit cigar rolling around his lips. He was a man of few words; he could neither read nor write, with the exception of penning his name on the back of paychecks from the city bus garage, where he had toiled for 30 years. Still, like so many men and women of his generation, he was bilingual, able to converse in English and in Czech. He used the latter most often when speaking on subjects not fit for our tender, monolingual ears.

When I think back 30 years or so to those endless summers, I realize that the gulf between our worlds was immense. We must have appeared soft to him: two boys growing up without fathers and with crisp city clothes and untested muscles. We could negotiate Chicago's public transit system, but we couldn't change a tire or plant a vegetable garden. That made us useless to him for chores. When he chopped off the heads of chickens in the backyard, we ran like frightened hens while he watched us, a dripping cleaver in his strong hand.

Still, for all the differences, we worshiped him, the patriarch of the family, and marveled at his many skills. In turn, he adored us, but not as a way to build up our self-esteem. Grandpa was more likely to teach us important things like how to win at poker. At the end of a long evening of cards, he would push his winnings of quarters and dimes in our direction and we would greedily divide up the loot. This was one way he would show his love. Years later, I would learn that my grandfather would sit in the garage with his homemade wine and fermenting sauerkraut and sob each time we went back to Chicago.

Grandmother Georgia was the perfect counterweight to Grandfather Chuck. She never stopped telling stories about her various Midwestern adventures, like the afternoon she caught one of her breasts in the wringer washer, or the time a tornado came during the night and rearranged the backyard sheds while she slept undisturbed on the screened-in porch. The day we arrived from the train station, she welcomed us with a long hug in her flour-coated apron. At that moment I felt as safe as I've ever felt: safe from the pain of divorce, the absence of a guiding male hand and all other dangers the world might throw my way.

She clucked over us like a mother hen, then sent us out into the unfamiliar natural world to swim, to catch snakes and catfish, to wander the forest edges and riverbanks and generally do what boys are supposed to do in the summer. When we returned to our indoor urban life we had been shaped up ever so slightly. Far from real men -- like the farm kids who bucked hay in small Iowa towns -- we nonetheless had tanned skin, sun-bleached hair and the faint outlines of something that could be called biceps.

She also would feed us, so heartily in fact that I came home at least 10 pounds heavier at the end of summer. Certainly I blame the Toas-Tite with its calorie-rich butter and cheese combinations on pliable Wonder bread. (Toas-Tite was also used to make "apple pies," which consisted of a dab of applesauce topped with a generous heap of white sugar, cinnamon and, of course, butter.) But equal blame goes to daily doses of bacon, sausage and eggs; endless columns of homemade cookies, poppy-seed coffeecakes, freezer pumpkin pies, Czech jellied pastries known as "kolachky" and cookies named "butterballs" (which is what I became after my visits to Iowa); and routine suppers of pork chops and those headless chickens we once ran from.

"Estate" is the wrong term for what my grandparents left. They were working-class people who lived well, and within their means. When my grandfather died he left sheds of junk and a house that was virtually worthless in today's real estate market. Even the Toas-Tite would fetch less than $20 on auction Web sites.

The treasures my grandparents passed on to me are more valuable than shares of stock and acres of land. How do you inventory gardens, food, family and the love of simple pleasures? Inheriting these qualities will take the rest of my life and there is no guarantee that I will succeed. No wonder the first time I used the Toas-Tite I burned the grilled cheese sandwiches. Just as I feared, it's not as easy as it looks.

Stephen J. Lyons is the author of "Landscape of the Heart," a memoir of single fatherhood. He lives in Washington state.This week he received a rejection letter that described his writing as "unfocused and full of broken glass." It actually made him feel good.