During the great bipartisan show of George W. Bush's acceptance speech, some of his opponents were left out in the cold. 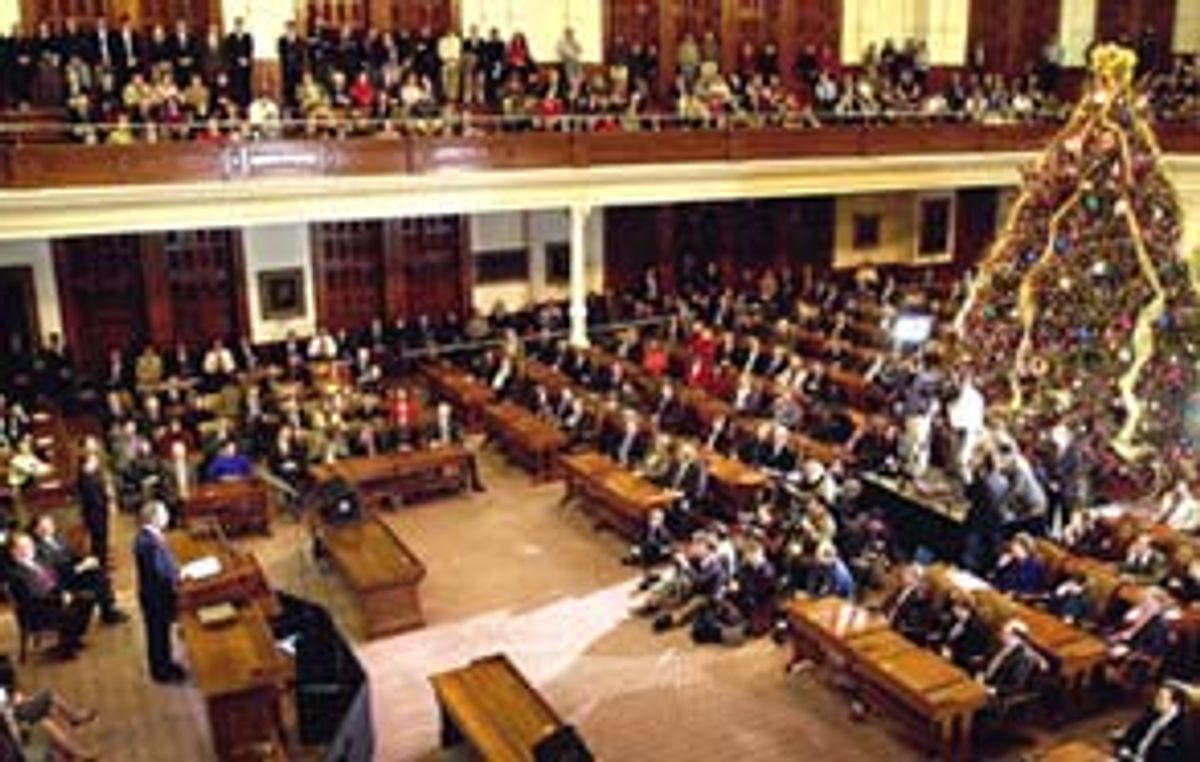 President-elect George W. Bush delivered his long-awaited acceptance speech Wednesday night to thunderous applause from the Democrat-controlled Texas House of Representatives, highlighting Bush's boasts of having reached across the aisle to work with Democrats. Or so it appeared.

But the shiny bipartisan veneer Bush hopes will follow him into the Oval Office lost some of its luster Thursday, when many Democratic representatives said they weren't invited to the speech, and at least one even after having requested an invitation.

Calling the Bush team's failure to invite Democrats "phony" and "hypocritical," Democratic state Rep. Kevin Bailey, D-Houston, said that "it was kind of surprising that we weren't invited."

President-elect Bush's office did not return several calls for comment.

"It shows you how good that they are at presenting impressions," adds Coleman, vice chairman of the Texas House's public health committee and a member of the appropriations committee.

"The impression was that the Legislature -- more than half the members of which are Democrats -- were standing there and applauding him. But that is an incorrect impression," Coleman says. "It was an image of solidarity. But the reality is, it wasn't solidarity from the standpoint that Democratic members of the Legislature who did not receive an invitation or were not invited were not part of the applauding crowd."

Bush indeed made a big show out of his being in a house of Democrats. After being introduced by Democrat Speaker of the House Pete Laney, Bush referred to the chamber as "a place where Democrats have the majority, Republicans and Democrats have worked together to do what is right for the people we represent."

"We had spirited disagreements, and in the end, we found constructive consensus," Bush said. "It is an experience I will always carry with me, and an example I will always follow. The spirit of cooperation I have seen in this hall is what is needed in Washington, D.C."

Junell endorsed Bush for president, even traveling around the country to stump for him, while Sadler is frequently quoted in the media saying nice things about the former Texas governor.

"I imagine this was for the team of Democrats who assisted Governor Bush not just in the past but in some way during his campaign -- by campaigning directly for him or by being silent," Coleman says. "This was a speech for his supporters."

But Democrats who have been critical of Bush and supportive of Vice President Al Gore didn't get invitations to Wednesday night's speech. In addition to Coleman and Bailey, other Democratic representatives less eager to work with Bush -- like Rep. Elliot Naishtat, chair of the human services committee; Rep. Yvonne Davis, chair of local and consent calendars; Rep. Tracy King; and Rep. Manny Najera, sources say, all failed to receive invitations to the bipartisan love-in last night in their own workplace.

"He speaks of being a bipartisan guy, but I think certainly the majority of Democrats in the Texas House would not consider him a bipartisan," Bailey says. "He tends to be bipartisan when you agree with him." Bailey says that there have been a few exceptional times when Bush has reached out to Democrats, but generally that has not been the case.

As for Junell, Sadler and a couple of other Democrats who do support Bush, Bailey says there just under 10 or so conservative Democrats in the state House and Bush "uses them as window dressing to claim bipartisanship while the overwheming majority of Democrats are just left out in the cold."

Rep. Glen Maxey, a Democrat from Austin, was walking out of his office Wednesday afternoon when he ran into some Republican colleagues.

"Are you going to the House chamber?" one asked.

"But Bush is going to speak tonight," said his colleague.

Maxey, of course, had no idea. He hadn't been invited. Hadn't even heard about it.

"If they would have had it at a campaign headquarters, or out on the street, or in the governor's mansion I wouldn't have expected to have been invited," Maxey says. "But if the point was to show the nature of the bipartisanship that happens in the Texas Legislature, they should have issued an invitation to everybody, not just the people who worked on their campaign or a few selected Democrats."

Najera, a Democrat from El Paso, says he "certainly" would like to have been invited to the speech, but wasn't surprised when he wasn't. On Election Night, he attempted to enter a Bush event that he had tickets for, but was turned away at the door by a Department of Public Safety officer who told him, he says, "that this function is for George Bush supporters only."

"Maybe they didn't get to our level" when it came to doling out the seats, Najera says. "I can't imagine how many friends have come out of the woodwork -- look at the amount of money the president-elect was able to raise. I imagine he more or less had to -- I don't want to use the word 'cater' -- but to invite them. Maybe it got full."

Others are less forgiving. "Regarding the many of us who were not invited to his speech last night in the House chamber, I hope that soon-to-be President Bush is more generous when he invites members of the Texas Legislature of both parties to visit him at the White House," says Naishtat. "And my sentiments are similar in respect to his efforts to reach out to Democratic members of Congress. I hope he is more inclusive than he was last night."

One chief of staff to a Democratic representative said that he called the governor's office to get a ticket for his boss and was denied one -- specifically because of his boss's political affiliation. When he first called, the staffer says, he was told "they were only going to be giving them out to Republican offices at this time."

"That was around 11 a.m. and she never called back," he says. "After lunch I asked around, and every Republican office in my hallway had been called and invited, and no Democrats had."

At around the same time of day, 11 a.m., Sadler, who has worked closely with Bush, says he "received a call from the governor's office inviting me to come."

None of which is to say that Bush isn't capable of being bipartisan, or that he has no record of working with Democrats outside the small circle of Junell, Sadler, et al. As governor, he refused to campaign against Democrats who were supportive of his proposals. Even some of these spurned Democrats acknowledge that Bush has, in fact, reached across party lines.

"You really cannot sit there and bad-mouth the man," says Najera. "There were certain things that did not happen during the session, but it was not sufficient enough for us to turn against our governor. And I think the majority of us feel that way. You didn't see too many of us turn around and denounce and say bad things about the governor during his campaign."

But Coleman says that this is just how "bidness" is done in Texas, where committee chairmen could be members of either party. "That's the tradition of Texas governors," Coleman said. "It was the tradition under [former Gov.] Anne Richards. You have to reach across party lines. The committee chairs who make decisions on your proposals could be a Democrat or could be a Republican. That's the fallacy of the whole argument that he understands how to reach across lines."

"Give him credit for this," Coleman said. "He did understand who held the keys, and he did meet with" those individuals -- like Laney, Sadler, and Junell -- "sometimes to the chagrin of Republican members."

Speaking in the Democrat-controlled Legislature "is his way of showing that," Coleman said. "But it was imagery."