"Blackbird: A Childhood Lost and Found" by Jennifer Lauck

A memoirist who survived a childhood of neglect and catastrophe reinhabits her younger self, with powerful and harrowing results. 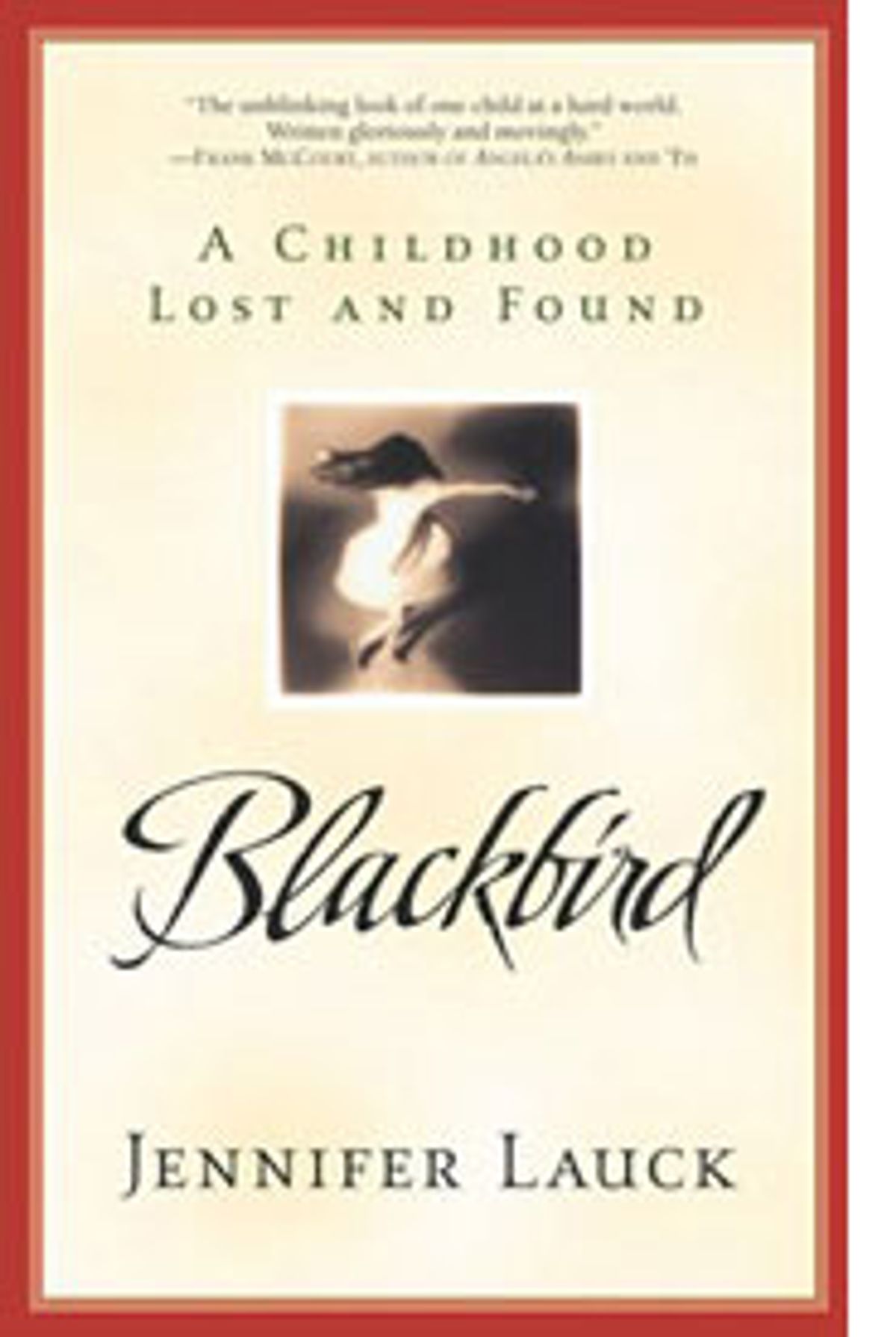 I don't pay much attention to jacket copy. No matter how celebrated the blurbists -- or should that be blurbers? -- they're often friends or former teachers of the author, or they're people who write in the same vein and hope their praise of the baby book will remind readers of their own so recently hot commodity, now a little long in the tooth. Since good writers have a hard enough time finding good readers in the first place, trying for a little coattail ride is an understandable tactic, albeit wasted on reviewers.

So thank you, Frank McCourt, for being the first blurber (blurbist?) to provide me with the right praise, and the right description, to introduce "Blackbird." McCourt calls it "the unblinking look of one child at a hard world. Written gloriously and movingly." I would edit out the "gloriously" because it doesn't mean a damn thing. (There you have one neat distinction between blurbing and reviewing.) Aside from that cavil, he's right, and now it's my job to tell you why.

Memoirs written from a child's perspective are tricky to sustain for an entire book-length narrative. After a few chapters, I often find myself tiring of the limited scope of the narrator's understanding, or I get annoyed by authorial intrusions, by the feeling that an adult voice is manipulating and ventriloquizing what the child knows. Jennifer Lauck reinhabits her child self, from age 5 to 11, with an amazing sureness and poise. One senses the adult woman's tenderness and empathy toward the little girl but is at the same time aware of a musing, almost dispassionate narrative distance. That finely calibrated balance makes it possible for readers to absorb painful material and not be depressingly swamped by it. Quite the opposite: The book, despite deaths, betrayals and abandonments, is always hopeful, resilient, even exhilarating.

That's because little Jenny is a curious and stubborn girl. She is one of those remarkable children Robert Coles studied some years ago, who bend under blows of circumstance but don't break. Instead, they become more supple and inventive in will and emotion. Jenny Lauck has what I can only call a kind of genius for making a habitable life from shoddy or broken material.

In the first chapter, 5-year-old Jenny describes her house and her daily ritual. Every morning she and her two cats sit in front of her mother Janet's bedroom door. "The rule is, no cats, no kids, not until the toilet flushes." That's when she walks the 18 steps to the kitchen and carefully assembles Momma's breakfast tray. Always, there's the reward, "that look in her dark brown eyes. It's one of those special looks for special people." Then, while Momma puts on her makeup, the two very seriously discuss beauty and fashion. If it's a "bad day," she stays in bed. "If it's a good day, she pushes the covers back and puts her feet on the floor. Today is a good day."

But Jenny, who has only indistinct memories of a time when her mother could walk like everybody else, has learned to read all kinds of signals. Janet has trouble standing. "When something's wrong, really wrong, my skin knows first. It's a prickly feeling at the back of my neck, over the top of my head, down my forehead, and into my nose." Janet says she's fine but "I look past her words and into her truth and I know it's not such a good day after all."

There will be fewer and fewer good days as operation follows operation for Janet's disease-riddled body. The family moves from the house on Mary Street in Carson City to an apartment in Los Angeles to be close to UCLA Medical Center. Now the bedroom stinks of pee and feces, which Jenny cleans when her father is at work. The nightstand is covered with pill bottles. "Momma and me, pills and water, every day, forever. I don't know any other way and I don't care because she's here." A painful ritual is better than none. Just a few weeks earlier Jenny had watched her mother dump the contents of several pill bottles in her lap and then methodically swallow them. The child feels the wrongness but doesn't know what to do. Momma holds green and red pills "and looks up, dark eyes steady, Snow White beautiful face ... 'Like Christmas,' Momma says."

Janet dies when Jenny is 7 and and her brother B.J. is 10. Their father is often gone and B.J.'s grief comes out in the form of anger toward everyone, including his sister. Then one day their father introduces them to a red-haired woman named Deb." Deb and Daddy, and the way they are together, there's something I don't know, don't understand ... It's knowing something's up even though you don't know what. It's a bad feeling up my neck." They move in with Deb and her three children and one day she and Jenny's father get married in Las Vegas.

Jenny's bedtime ritual used to be reading "Snow White" with her father. Now she often retreats to her room and examines the story's pictures, as if looking for clues to her own life. She knows that Snow White is not safe, even with the dwarfs. Deb is a dangerous stepmother, manipulative, untrustworthy, unloving, possibly mentally unstable. There are new rules. "That's just the way it is" becomes Jenny's new refrain as she tries to adapt stoically. She learns about outward compliance and inner rebellion, the effectiveness of nonverbal resistance.

Deb tries to break her will. Jenny is sent to a summer camp where the swimming instructor throws her into the deep end of the pool over and over and tells her to "conceive" how to swim and then do it. Later, Deb banishes her from the house and sends her to live by herself, at age 10, in a communal house with transient strangers. (It's 1971, the hippie era.) But here, as she has once before, she finds safety with good people. With a little girl named Zoe, she plays dress-up, just as if she were a child too. Max and Karen teach her to cook in the communal kitchen. When Karen gives birth to baby girls, Zoe and Jenny are present at the birth. Max plays "Blackbird" from the "Sgt. Pepper" album. "The whole room is full of wait and magic and no one has to tell me that this is the most important thing in the world."

Jenny and B.J. are rescued at last, or so it appears. Jennifer Lauck is working on a sequel to "Blackbird." I hope her broken wings will learn to fly there. Meanwhile, the lovely lyrics of the Beatles song run through my head. Snow White comes home again and the blackbird sings in the dead of night.