Blow jobs and other boring stuff

Teens have casually redefined what used to be called sex. 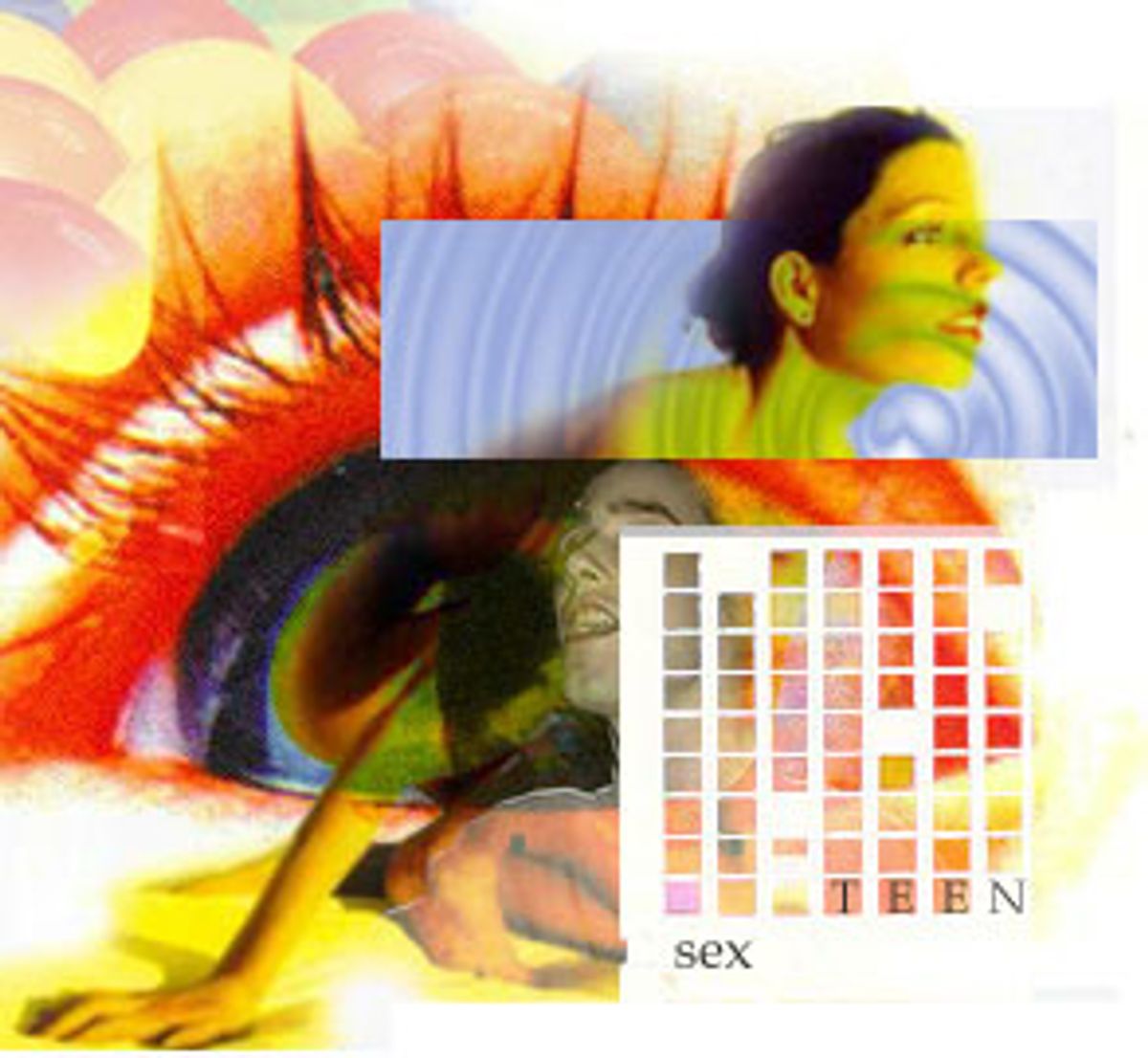 "Jessica and I knelt side by side against the wall of the big cliff behind Red Rocks one night," Lindsay tells me, "and we gave the two boys we'd just met double blow jobs so that they would give us free tickets to the 'Rave on the Rocks' show." Lindsay is pretty and blond and looks like she might sing in a church choir. "It was kind of a dare," she continues. "We raced each other to see who could get her guy off first. Jessica won, but I think her guy's dick was a lot harder to start with. It didn't mean anything to us -- it's not like we had real sex."

I am talking with a group of five teenage girls about sex. They are all middle-class kids who attend a large, fairly liberal, highly rated high school. They are all decent students with college plans, and are involved in a variety of school activities and clubs. I will talk later with a similar group of boys. All of the kids have identified themselves as sexually knowledgeable and heterosexual, and they are delighted that I've set up access to an anonymous e-mail account for them to write me afterward about anything they're not comfortable talking about face to face. Tell me a story, I've asked of them -- tell me how it is to be a teenager in our sexual world.

I loosen them up by asking about condoms, a word that would have embarrassed me to death as a teenager. But girls are as conversant today about condoms as they are about shoes and belly-button piercings, and proud of their expertise. They all carry a single condom in their purses, just in case. "I've carried one since I was 12," says Amanda, a petite, soft-spoken girl who is on the track team. "Lipstick and a condom, that's about all you need. You can't trust boys." She hasn't actually had intercourse yet, but, she says, "You never know." At 16, she's given blow jobs to five boys. "It was OK, no big deal. A little boring sometimes, because the guys don't say much, and you have to keep sucking until your mouth hurts. I always pretend I'm Drew Barrymore when I do it."

None of the girls swallow. Just the idea of doing so is "gross." They also don't use condoms for blow jobs, because, they reason, they don't swallow. "On my chest, or my face, or his belly, that's the only place it goes," Cara explains. They know all the technical details about safe sex, having been taught in school since third grade that you can die from sex, but they seem to have created their own rules about how it works for them.

Phone sex is very popular with the girls -- they're experts, as they demonstrate with their fake oohs and ahs. "I talk to my boyfriend every night from 11 p.m. to 1 in the morning, after my parents are in bed," Katie says. "And in between talking about school and gossiping, we touch ourselves and talk dirty, and then we come together." Her sophistication when she speaks of this rivals any adult woman that I know.

Maintaining virginity means the same to all the girls: You can do anything you want as long as there's no real penetration. "We joke and call it 'outercourse,'" Cara says. She is a straight-A student and plans to be a lawyer some day. "You know, like the opposite of intercourse. It's everything but the penetration -- all the making out, the blow jobs, the phone sex, masturbating with each other in person, getting naked and sleeping together. All of it is safe sex." Four of the girls are in the technical "virgin" category, but one is not. She is envied by the other girls a bit, because she seems matter-of-fact about having "done it," and not only does she have a good-looking, steady boyfriend of over one year, she also manages to starve herself to stay at size 0.

We get down to the things that matter. Giving acquaintances blow jobs is not a serious concern for the girls. They don't worry much about diseases or pregnancy, and they don't seem to worry about their parents finding out. But they worry a lot about how they look, about being too fat when they get naked, or when their boyfriends go "down there."

"Yeah," agrees Lindsay, perhaps a size 4 at best. "My belly pooches out right below my belly-button ring."

The ideal for every girl in high school, they explain, is to fit into size 0 jeans, a size that didn't even exist 20 years ago.

"Sure," Tyler says, when I ask the boys later about the girls' obsession with their bodies. "It's true. Girls don't eat." The boys all seem to think this is ridiculous, yet they admire the very thin girls. "I don't like when all they can talk about is how they don't eat much or how hungry they are but how they shouldn't eat," Tyler adds. "I like them a little bit athletic, but not fat. They have to be fly to go out with me."

"Fly," the boys explain, means "hot." "Fly," "hottie," "fresh" and "stylin'" have replaced the "babe" of my generation. Even though girls eat only handfuls of dry ramen noodles for lunch to stay fly, this is phat, or a very good thing to be. Boys are pimps, or pimpin', as in extremely successful with the girls. All of the boys are just chillin' with me while we talk, but the language for actual sex tends to focus on good old-fashioned blow jobs, dicks and going down.

"I go down on my girlfriend a lot," Jared says. "But I always ask her first." "Sexual harassment" is a term very loosely defined, but they're conscious of it all the time. Their high school has a policy against it, and everyone knows that although that policy is written gender-free, it only applies to boys. "Girls can say or do anything they want," Jared explains, "but no girl is ever going to be in the dean's office charged with sexual harassment." So they're careful -- you can't call a girl a "bitch" on school grounds for fear of retaliation through a sexual harassment complaint; and you never know when your girlfriend might get mad at you and want revenge, so you always ask before you go down on her.

The boys maintain the same definition of virginity as the girls do: actual intercourse, penis to vagina. Three of the boys are not "virgins" and two are, by choice, they say. "Everybody wants to get married someday," Matt, a tall, sensitive basketball player says, "and there's no reason you can't have a fun sexual time until then and still be a virgin. There's lots of ways to get off." This vision of the future surprises me -- in this day and age of rampant divorce, every single one of them claims they want to be married and have kids "someday," with that day placed right around the age of 28 to 30.

None of the teenagers know anyone with AIDS, although there is much talk of herpes and other sexually transmitted diseases. All of the boys who are not "virgins" religiously use condoms when having sex, but none of the girls they are with claim to be on the pill. "That marks you as a slut in high school," Jared reports. The word "slut" is not used affectionately or in a sex-positive way; it retains the same slur with these boys as it did before the sexual revolution. Not one of the kids is aware that a teenager can get free medical/sexual checkups and free birth-control pills from the county health department, without their parents being involved.

When I later ask the high school counseling office if this information is available to students, I am shown a book that lists counseling centers, health information, suicide prevention lines and other community information. I ask why they don't make this information available to teenagers via hallway posters or something else more visible, since it is a rare teenager who hangs around the counseling office searching for information, and an even rarer one who wants to ask an adult when they need help. "It's district policy," the counselor tells me. "The district feels that posting information about things like sex or suicide tends to encourage the behavior and that's not our policy."

Fortunately, the teenagers are all comfortable in the online world; they know how to research things, and they are familiar with Web sites like Go Ask Alice and Scarleteen. "Those sites aren't too bad," Josh says. "A lot of the kids ask really dumb questions, but at least they're honest. I like to read the questions about drugs and alcohol the most." The book "Go Ask Alice," which is presented as a true story of a young girl writing a diary as she descends into her own personal hell, is a favorite of almost every teenager today. Most of the teens smoke pot and drink beer on weekends, about half have tried ecstasy and one has had at least two bad trips on drugs. They say they don't mix ecstasy with sex, preferring only to dance under the influence instead, because "you can have sex anytime."

I ask them if they think of their sexual activities as a form of recreation. "Sort of. It's just there. It's something we do. We do lots of other things too -- go to movies and concerts and stuff. But blow jobs and phone sex are just things everybody has to try before you get too old, like your first beer or cigarette."

Do they think all of this is too much too soon? "No," they say unanimously, with the confidence that teenagers have always owned in thinking they know more than any adult. I understand where they're coming from -- all kids want to work at being grown-up, and these kids are layered with sexual images everyplace they go from a very young age. No self-respecting teenager would be caught at anything less than an R-rated movie, and the Spice Channel is a regular on cable for many of them. None of the kids I talked to spend any serious time looking at pornographic pictures on the Web, because they say it's too "shady."

I am somewhat envious when we are done talking. In my day we went through incredible turmoil just thinking about sex, and knowledge was sketchy at best. The girls seem to be more or less in control of their sexuality, and that's a positive development. But there is something in many of the kids' stories that leaves me a bit sad. Some of it reminds me of the classic frustrated housewife image, deciding what color to paint the ceiling while having sex -- "I think girls do blow jobs and stuff just to make us happy," Jared says. "One day I looked up at my girlfriend's face while I was going down on her and I caught her staring out the window, looking bored." Some of it makes me worry about them, with their combination of emotional innocence and sexual sophistication -- I sense danger lurking around unseen corners.

And some of it just makes me ache for a simpler, more restricted childhood with a lot less information available for all of them. "Sometimes I think the whole world is too focused on sex," Erick, 15, says with a world-weary sigh. "There are nights when I'm locked away in my girlfriend's bedroom while her parents are out, and I know it's her turn to give me a blow job because I went down on her the night before, but sometimes I think, maybe we should really be out doing something else besides sex."

Susannah Indigo is a freelance writer.