"The Century of the Gene" by Evelyn Fox Keller

A new book argues that there may be no such thing as a gene. 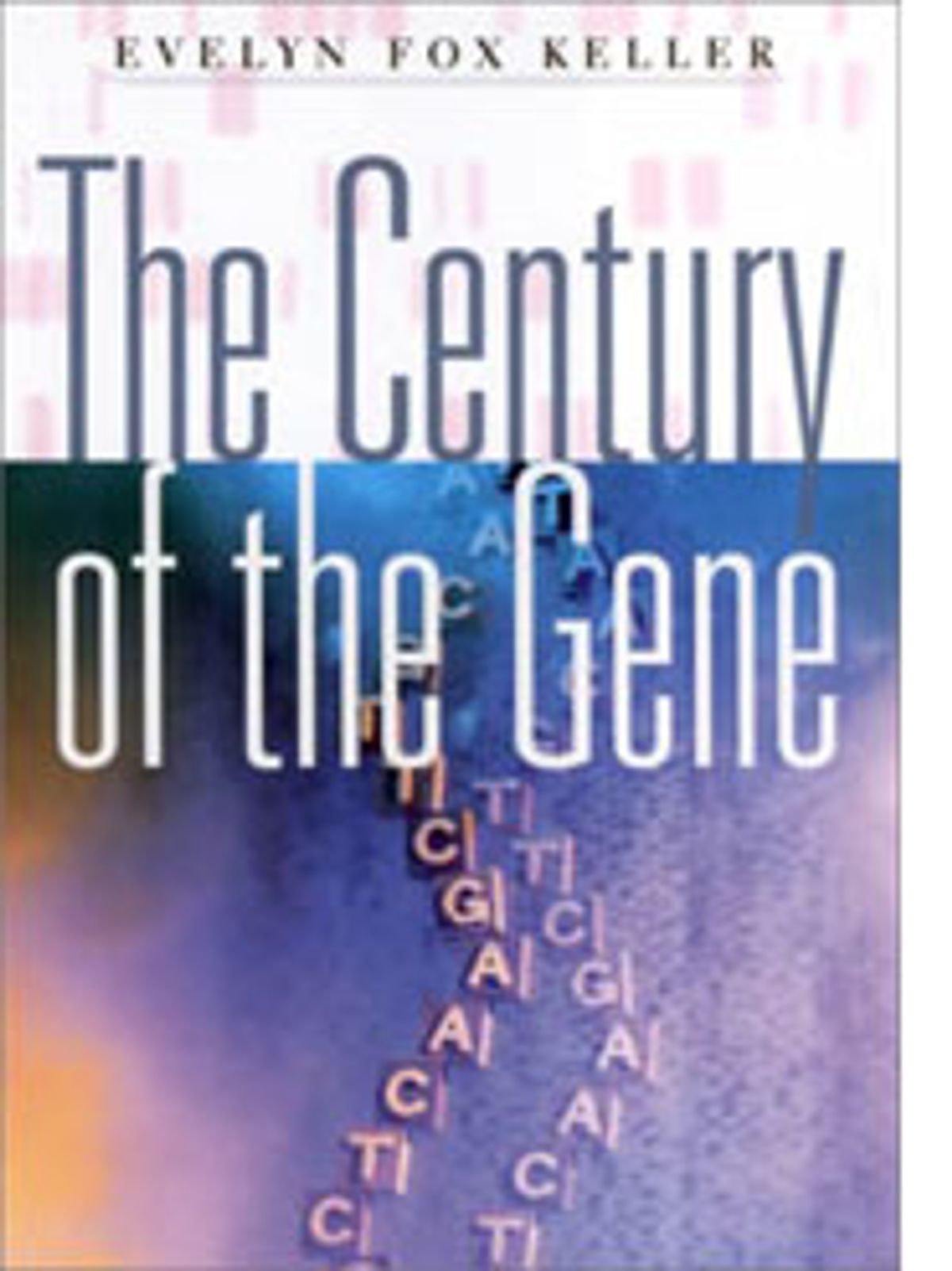 Only a few years ago, the popular media was reporting that scientists had found the gene for homosexuality, for aggression, for breast cancer. Buried in the middle of an article, perhaps, were questions about how a gene could determine complex social behavior like homosexuality, or what it could mean to say there's a gene for a lethal disease. Still, the pervasive view has been that we are our genes; one writer predicted that one could eventually pull from one's pocket a CD inscribed with one's genetic sequence and say, "It's me!"

Yet if you look carefully at recent articles in science magazines, you notice a different kind of language: Science News, for example, has reported genetic discoveries such as "Gene Tied to Prostate Cancer," "Sinus Infections Linked to Gene" and "Gene Implicated in Diabetes." Some very diffident verbs are carrying a lot of weight here. What precisely do "tied," "linked" and "implicated" mean? If you read further, you discover that of the small percentage of sufferers of prostate cancer with a family history of the disease, some carry the same mutated stretch of DNA. Another chunk of mutated DNA is more common in, but not exclusive to, sinus sufferers. Not for nothing did the writers avoid saying anyone had "found the gene" for prostate cancer or sinus infections. Just what the scientists had found was still unclear.

I might not have noticed this if it were not for Evelyn Fox Keller's latest book, "The Century of the Gene," which traces the history of genetics. Her title implies that the era of the gene is over, and though she never puts it as baldly as that, her slim volume has a radical premise: There may be no such thing as a gene. At least, it has proved very difficult to isolate a discrete physical item that can do the work our notion of the gene does. Though the book gets quite technical, you don't have to have a background in molecular genetics to read it. Any reader willing to think through difficult ideas explained in crystal-clear prose is in for a treat: Keller, a historian of science at MIT, elegantly demolishes one of our culture's central dogmas.

From the moment Charles Darwin proposed his theory of evolution by natural selection, it was clear that the theory required a mechanism for the maintenance of traits through the generations. By the 20th century, when the term "gene" was coined, scientists were searching for a fundamental unit of life that would account for the capacity of life to maintain and replicate itself. When James Watson and Francis Crick identified DNA's double-helix structure as the bearer of genetic information, they had at one elegant swoop, it seemed, found a unit that was by its very structure self-replicating. As I was taught in high school, one gene equals a stretch of DNA that makes one protein -- DNA makes RNA makes protein makes us.

But, Keller explains, DNA can't copy itself on its own. It requires cooperating enzymes. Some enable transcription, others check the accuracy of transcription and some repair miscopied DNA. Worse, scientists discovered that the stretches of DNA that are transcribed into proteins are interrupted by vast areas of apparent "junk" DNA -- as much as 97 percent of the human genome -- which the enzyme machinery must edit out. Scientists then learned that in editing, the enzyme apparatus "chooses" what to cut, so one chunk of DNA can lead to various proteins and, perhaps, Keller writes, as many as hundreds per "gene." Also, some proteins can arise from several different, redundant genes. What sequence now counts as the gene?

Then there's the obvious problem that within an organism every cell contains the same genes, yet cells differentiate into very different tissues. Some further mechanism in each cell must tell each gene whether to turn on or off and when. Here Keller, whose previous books include "Reflections on Gender and Science," offers one of the gems that make one grateful for feminist historians of science: Assuming that the cytoplasm of a cell is purely passive, scientists drew the absurdly Aristotelian conclusion that sperm, pure nucleus, provides the activating force to the passive, cytoplasm-heavy egg cell.

Keller uses an analysis of the cloning of Dolly the sheep to explain the flaws in this theory. If the genome (residing within the nucleus) holds the developmental program, why shouldn't it be possible to clone a new organism from the nucleus of an adult cell, rather than by transferring the nucleus of an adult cell into an enucleated egg cell, as was done in Dolly's case? Ian Wilmut's success in cloning Dolly depended on a not-yet-understood relationship between the nucleus and the cytoplasm of the cell. Keller argues that the genetic program that tells a cell what proteins to make exists only in the complex regulatory dynamics of the cell as a whole, and the genetic program that makes each person "consists of, and lives in, the interactive complex made up of genomic structures and the vast network of cellular machinery in which those structures are embedded. It may even be that this program is irreducible -- in the sense, that is, that nothing less complex than the organism itself is able to do the job."

By the time one finishes reading "The Century of the Gene" and learns that "the gene is not a physical object," it is hard to recall the triumphant genetic determinism that so recently seemed all-pervasive.

As delightful as Keller's analysis is, one wishes in the end that she had been less agnostic about the reality of genes. She sticks carefully to her focus on "gene talk" and its scientific usefulness, pointing out that it is the very success of genetics that has undermined its core concepts. Nor does she explain the wide appeal of genetic determinism. One wishes that her book had been longer. But this is praise reserved only for the best writers.

Keller has offered a decisive counterexample to the simple view that science deals only with physical objects. Yet science does seek the truth about physical reality, and if Keller is right, gene talk doesn't describe the real world adequately. Let's hope that the news reaches Time and Newsweek soon.

Carolyn McConnell is a writer who lives in Seattle.