When the music mattered: A former writer for the New Musical Express looks back at the overheated world of the British music weeklies. 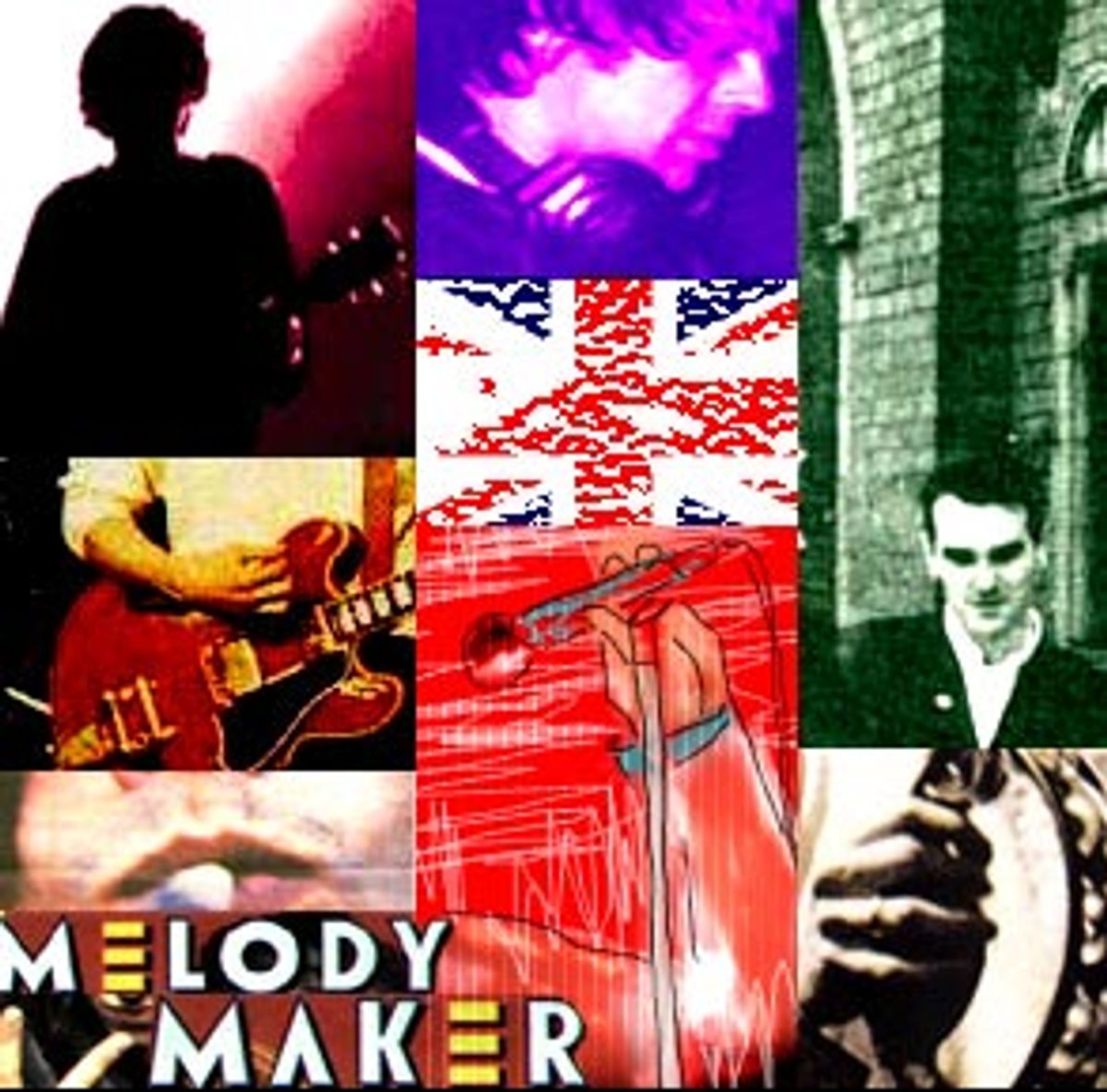 In the late 1970s, a generation of British teens was awakened by the call to arms of punk rock. I too wanted to play in a band and I wasn't going to let my rabbity guitar playing get in the way. Like many other music compulsives, I turned to the country's trio of carping, exuberant and sometimes sneering weekly music papers for guidance and company. I used to buy Sounds for its breathless enthusiasm and its new-wave coverage. NME covered similar ground but was, I feared, a little quicker to conceptualize and laugh at people's shoes. Melody Maker, I judged by its classifieds, was the house magazine for prog rockers and other of the technically minded fans we dismissed as "musos." Genesis formed in its "musicians wanted" section. This was all I needed to know to stay away.

It was through a band ad in Sounds that I met my friend Liz. We pooled our musical knowledge (four chords) and we learned to love the NME.

I shuffled into London around 1984 from England's premier miserable rock province, Manchester, where I had been a contributor to local music magazines. In a moment of festive boldness, at the 1983 NME Christmas party, I asked the editor if I could write the gossip news page. I spent most Mondays for the next two years walking to my typewriter at the Carnaby Street office feeling somewhat surprised by this new posting.

The United States lacks an equivalent to Britain's irrepressible, obsessive newsprint weeklies, probably because of its geophysical sprawl and unbridgeable interstate and inter-ethnic cultural divides. And for all rock 'n' roll's cultural impact here, the music has only intermittently been a matter of social urgency for teens. The Anglocentric British weeklies thrived on a narrow geographic focus, love-it-hate-it London and its relationship to the upstart provinces, and an all-consuming need to precisely define a band's relevancy in any given publication cycle. The United Kingdom, back then, still had a higher-education program, which meant that many students did not have to work through school, thereby giving them plenty of time to read and care about those voluminous weeklies.

And let's not forget a legal system that discourages spontaneous litigation by requiring the loser to pay the winner's legal fees. This process makes libel prosecutions a gamble and in practice allows a writer to be a little more creative with fact. As a writer in the United States in the years since, I have always been startled when the fact-checker actually gives me a call.

When I left London, 11 years ago, Margaret Thatcher was still the prime minister and the media brass at NME, Melody Maker and Sounds were yet to face the trek across the treacherous tundra of the Internet. God knows what's going on over there today. Ken Livingstone, formerly the leader of the Greater London Council and leftist bane of conservatives everywhere, is now, disconcertingly, Lord Mayor of London. Livingstone's recent repositioning is not a bad thing, just surprising, rather like finding out that Lou Reed now has a theater in Branson, Mo.

However, it is sad news indeed to hear that Melody Maker, an institution since 1926, will be no more. Its owner, IPC Media, announced last week that the paper would close. Melody Maker's last stand-alone edition has just been published, but its name and "musicians wanted" section will live on, ironically, in the pages of the NME.

Melody Maker and NME enjoyed a certain rivalry despite their both being owned by that same IPC Media. Looking back through the mists of history, the tone of this rivalry was pitched somewhere between mods vs. rockers and a schoolboy feud: a mixture of superficial stylistic, social and occasional sartorial differences invisible to outsiders but deeply diverting for those involved. It was quite silly, really. During my stay at the NME, Melody Maker sent us two editors and countless other staff members and nobody thought twice about it.

By then, Nick Kent and Chrissie Hynde, the last of the rock 'n' roll glamorhacks of the period and both NME stars, had moved on, as had the famously vicious teenage double-act of Julie Burchill and Tony Parsons, whose scathing classic meditation on punk rock, "The Boy Looked at Johnny," is still marvelous reading. The truest test of notoriety was the number of annoyed readers denouncing one on the letters page.

Most complained of at either paper at the time were the NME's Paul Morley and Ian Penman. Morley infuriated the readership with his passionately conceptual embrace of pop and style. Penman, his prose less frothy than the extravagant Morley's, was given to elegant strings of obtuse argument that were nonetheless provocatively positioned.

Melody Maker frowned on punk rock and its variously arty offspring a little too long; it lost some credibility in the late 1970s. When it revived and sought new direction in the 1980s, it embraced some of the styles that Sounds and the NME had ignored. It championed goth bands and a particular kind of bleak, pre-grunge rock that was quietly growing up outside London, giving the Sisters of Mercy and Red Lorry Yellow Lorry a good home.

The NME threw itself into promoting dance, rap and populist lefty rhetoric. A natural polarity evolved. Melody Maker scoffed at the earnest folkie Billy Bragg and NME skewered the gloomy Mission. The disputes probably sold more copies of each paper. Ironically, Melody Maker also harbored a group of young post-Morley/Penman theorists who out-NME'd everyone. One night at the bar of the Mean Fiddler, a fellow NME-er and I were pleased to find ourselves in the rare company of Penman, who had since moved on. My colleague nudged me just in time to witness a couple of those word-conscious young MM writers furtively peeking around the corner. Wide-eyed with wonder, they were staring at Penman as if Santa Claus himself had put in an appearance there in distant Harlesden.

The weeklies provided a paid alternative to Speaker's Corner for a handful of obsessive enthusiasts. At NME and, I'm sure, at Melody Maker as well, pink-cheeked 25-year-olds would stand in the middle of the office shouting excitedly to themselves about R.E.M.'s third album, which was either vital or redundant, depending on whether or not one felt Roxanne Shante deserved the front cover instead. Day after day, week after week, the fever burned ever hotter and whiter at the Tuesday morning editorial meetings. Those ruthless conceptual trouncings that so many PR activists and bands complained of were not the product of jaded strategists.

At that time, I was holding the popularly despised position of being a writer who also had a band. Being both an artist and a critic who wrote in judgment of one's peers made for a slow-boiling dissonance of self. This syndrome is probably not so common in the United States, where critically vandalizing the tenderly crafted wares of other people is not considered mainstream entertainment.

Naturally, on several occasions I was to find myself on the receiving end of a critical trouncing. My work and stage presence were mercilessly cataloged by the style hounds at Melody Maker. My band was called Miaow; had I been a kitten, one writer said, I would have been drowned in the Thames and we'd all have been a lot better off. I should note that the magazine was occasionally kinder as well; I didn't take any of the comments too seriously, since I appreciated the need to entertain as well as the duty to vent one's truth.

Harder, though, was being hissed at and tampered with while buying low-end groceries in supermarkets by self-styled anarcho-punks hissing, "the fuckin' NME!" -- as if we freelancers, the micro drones of the IPC empire, were some sort of regal oppressors of the masses. Adjusting my raincoat, I wondered anew at the power of the weekly word and the enormity of the illusion that I too once held.

The reality was that I had just returned from a trip to Record & Tape Exchange, where I had sold a big bag of gaily packaged 12-inch remixes and other dubious review product, the food stamps of the freelance weekly contributor. I also wondered why was I never accosted in more artistic environments, which would have provided a much more noble context for the insult.

I easily justified my hyena-like occupation by inventing my own ethical code: You could make fun of someone's fashion sense but not the size of their ass. One day I thoughtlessly regurgitated a story about a musician's drug-induced psychosis, considering it an unremarkable music-biz pitfall along the lines of a tax audit. My friends asked me what on earth I was thinking. The horror of long-lost perspective began to dawn, heavy and grim. And hardest of all was hearing the voice of that deputy editor barking excitedly that I had ceased to "go for the jugular."

It is possible that the over-thought journalistic hotpot that produced those three papers and their attentive readers will never be seen again. It was truly a singular privilege to be allowed to rant about music in this forum and to such a tolerant audience. Sometimes one forgot, though, at 4 in the morning, crying bloody tears over a faulty typewriter, sentenced by that deputy editor to a third rewrite of an interview.

"Write about the bloody music!"

As music fans leaned less and less on the printed weekly music media for news, the papers readjusted. NME broadened its brand name, endorsing everything from music awards to knitting patterns (OK, they stopped short of knitting patterns) and securing a strong online presence. Melody Maker redefined itself as an "entry point" for teenagers interested in in-depth musical analysis. It went glossy and tabloid-sized. It even went hard rock. It did everything except embrace Scientology, but it still had to close.

Cath Carroll wrote for the New Musical Express from 1983 to 1989. Her new album, "Cath Carroll," is now available on Heart & Soul Records. Her book "Tom Waits," a biography and critical evaluation of the singer and songwriter, will be published by Thunder's Mouth/Unanimous Publications in January 2001. She lives in Chicago.