Anthony Bourdain remembers the sexy, voyeuristic moment he decided to become a chef. 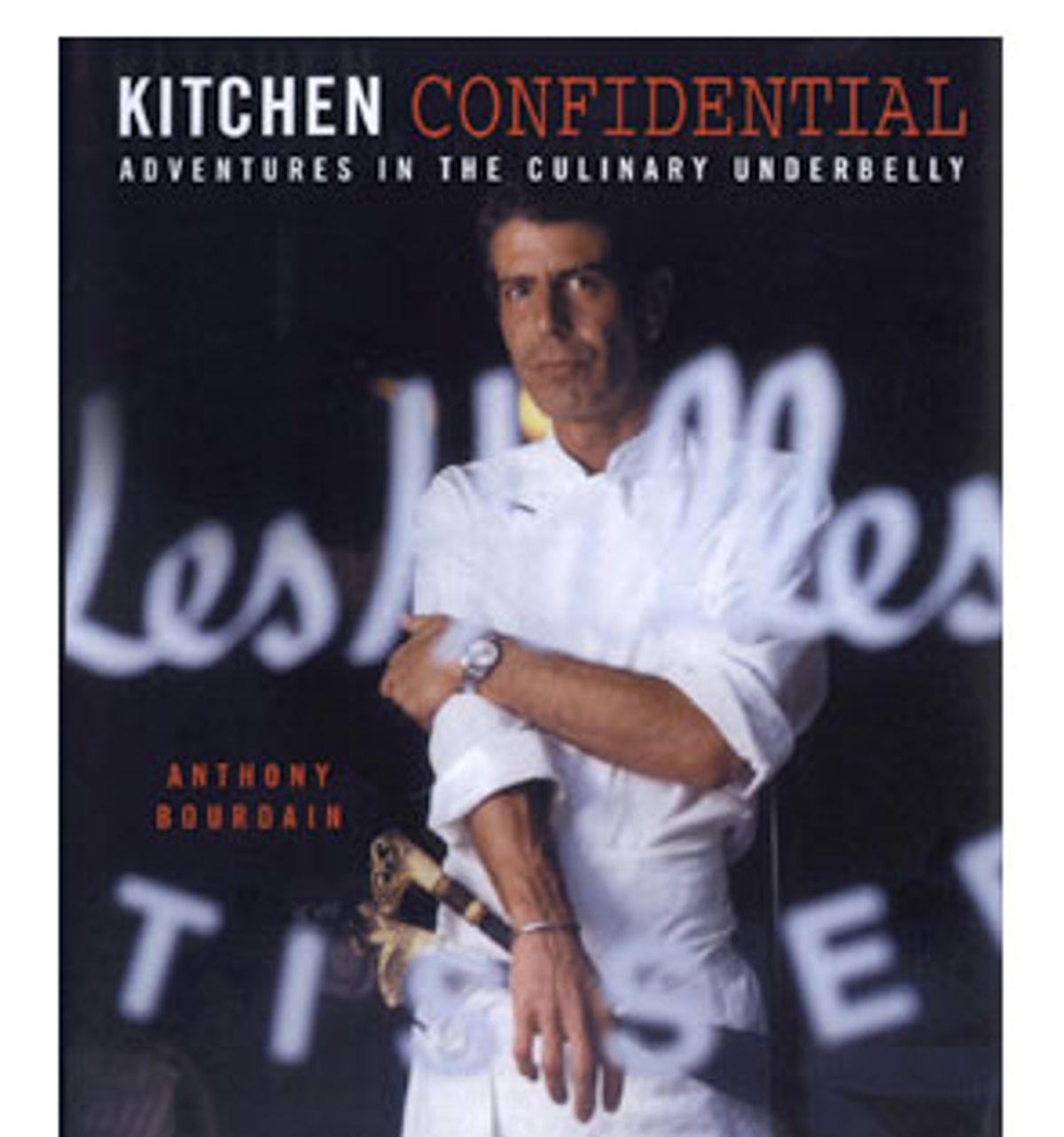 In 1973, unhappily in love, I graduated high school a year early so I could chase the object of my desire to Vassar College -- the less said about that part of my life, the better, believe me. Let it suffice to say that by age eighteen I was a thoroughly undisciplined young man, blithely flunking or fading out of college (I couldn't be bothered to attend classes). I was angry at myself and at everyone else. Essentially, I treated the world as my ashtray. I spent most of my waking hours drinking, smoking pot, scheming, and doing my best to amuse, outrage, impress and penetrate anyone silly enough to find me entertaining. I was -- to be frank -- a spoiled, miserable, narcissistic, self-destructive and thoughtless young lout, badly in need of a good ass-kicking. Rudderless and unhappy, I went in with some friends on a summer share in Provincetown, Cape Cod. It was what my friends were doing and that was enough for me.

Unfortunately, I needed money. My on-again-off-again girlfriend spun pizza for a living. My room-mates, who had summered in P-town before, had jobs waiting for them. They cooked, washed dishes, waited tables -- usually at night -- so we all went to the beaches and ponds each morning, smoked pot, sniffed a little coke, dropped acid and sunbathed nude, as well as indulging in other healthy teenage activities.

Tired of my drain on the household finances, one annoyed and practical room-mate hooked me up with a dishwashing gig at the restaurant where she waited tables. Dishwashers (sudbusters, aka pearl divers) were the most transient breed in the seasonal restaurant business, so when one goofball failed to show up for work for two days, I was in. It was my introduction to the life -- and at first, I did not go happily.

Scrubbing pots and pans, scraping plates and peeling mountains of potatoes, tearing the little beards off mussels, picking scallops and cleaning shrimp did not sound or look attractive to me. But it was from these humble beginnings that I began my strange climb to chefdom. Taking that one job, as dishwasher at the Dreadnaught, essentially pushed me down the path I still walk to this day.

The Dreadnaught was -- well, you've eaten there, or someplace like it: a big, old, ramshackle driftwood pile, built out over the water on ancient wooden pylons. In bad weather, the waves would roll under the dining-room floor and thud loudly against the sea wall. Grey wood shingles, bay windows, and inside, the classic Olde New Englande/Rusty Scupper/Aye Matey/Cap'n Whats's decor: hanging fishnets, hurricane lamps, buoys, nautical bric-a-brac, the bars fashioned from halved lifeboats. Call it Early Driftwood.

We served fried clams, fried shrimp, fried flounder, fried scallops, French fries, steamed lobsters, a few grilled and broiled steaks, chops and fish fillets to the mobs of tourists who'd pour into town each week between the 4th of July and Labor Day.

I was surprisingly happy in my work. The Dreadnaught management were an aged, retiring and boozy lot who stayed attractive and cheerful, free with drinks for the kitchen and with their favors as well.

There was Bobby, the chef, a well-toasted, late-thirtyish ex-hippie who, like a lot of people in P-town, had come for vacation years back and stayed. He lived there year-round, cheffing in the summer, doing roofing and carpentry and house-sitting during the off-season. There was Lydia, a half-mad, matronly Portuguese divorcee with a teenage daughter. Lydia made the clam chowder for which we were somewhat famous, and during service dished out the vegetables and side dishes. She drank a lot. There was Tommy, the fry cook, a perpetually moving surfer dude with electric blue eyes, who even when there was nothing to do, rocked back and forth like an elephant to "keep up the momentum." There was Mike, an ex-con and part-time methadone dealer, who worked salad station.

In the kitchen, they were like gods. They dressed like pirates: chef's coats with the arms slashed off, blue jeans, ragged and faded headbands, gore-covered aprons, gold hoop earrings, wrist cuffs, turquoise necklaces and chokers, rings of scrimshaw and ivory, tattoos -- all the decorative detritus of the long-past Summer of Love.

They had style and swagger, and they seemed afraid of nothing. They drank everything in sight, stole whatever wasn't nailed down, and screwed their way through floor staff, bar customers and casual visitors like nothing I'd ever seen or imagined. They carried big, bad-ass knives, which they kept honed and sharpened to a razor's edge. They hurled dirty sauté pans and pots across the kitchen and into my pot sink with casual accuracy. They spoke their own peculiar dialect, an unbelievably profane patois of countercultural jargon and local Portugee slang, delivered with ironic inflection, calling each other, for instance, "Paaahd" for "Partner" or "Daahlin" for "Darling." They looted the place for everything it was worth, stocking up well in advance for the lean months of the off-season. A couple of nights a week, the chef would back his Volkswagen van up to the kitchen door and load whole sirloin strips, boxes of frozen shrimp, cases of beer, sides of bacon into the cargo area. The speed racks over each station -- containing bottles of cooking wine, oil, etc. for easy access during service -- were always loaded with at least two highball glasses per cook; Lydia liked to call them "summertime coolers," usually strong Cape Codders, Sea Breezes or Greyhounds. Joints were smoked in the downstairs walk-in, and cocaine -- always available, though in those days very expensive and still considered a rich man's drug -- was everywhere. On payday everyone in the kitchen handed money back and forth in a Byzantine rondelay of transactions as the cooks settled up the previous week's drug debts, loans and wagers.

I saw a lot of bad behavior that first year in P-town. I was impressed. These guys were master criminals, sexual athletes, compared to my pitiful college hijinks. Highwaymen rogues, buccaneers, cut-throats, they were like young princes to me, still only a lowly dishwasher. The life of the cook was a life of adventure, looting, pillaging and rock-and-rolling through life with a carefree disregard for all conventional morality. It looked pretty damn good to me on the other side of the line.

But if there was one moment where I saw clearly what I wanted, it was at the end of that summer.

I'd moved up a bit by now. Mike had gone missing on a meth jag and I had been promoted to the salad station plating shrimp cocktails, cracking oysters and cherrystone clams, mixing canned lobster meat with mayonnaise and filling champagne glasses with strawberries and whipped cream.

The Dreadnaught line was a long, narrow affair: a cold station by the exit door to the parking lot, a double-decker lobster steamer where we'd kill off the one-and-a-half and 2-pounders by the dozen, stacking them up like cordwood before slamming shut the heavy metal doors and turning the wheel, giving them the steam. Then came a row of deep-fryers, a range, a big Garland pull-out broiler, a few more burners, and finally a brick hearth for charcoal grilling, all of this bordered by the usual pass-through on the other side -- wooden cutting board/counter with sunken steam table, and below that, the low-boy reach-in refrigerators for reserve supplies. By the far-end open hearth, where Bobby, the chef, worked, was a Dutch door, the top half kept open so incoming tourists could get a peek at some lobsters or steaks grilling as they entered and get in the mood.

One weekday, a large wedding party arrived, fresh from the ceremony: bride, groom, ushers, family and friends. Married up-Cape, the happy couple and party had come down to P-town for the celebratory dinner following, presumably, a reception. They were high when they arrived. From the salad station at the other end of the line, I saw a brief, slurry exchange between Bobby and some of the guests. I noticed particularly the bride, who at one point leaned into the kitchen and inquired if any of us "had any hash." When the party moved on into the dining room, I pretty much forgot about them.

We banged out meals for a while, Lydia amusing us with her usual patter, Tommy dunking clams and shrimp into hot grease, the usual ebb and flow of a busy kitchen. Then the bride reappeared at the open Dutch door. She was blonde and good-looking in her virginal wedding white, and she spoke closely with the chef for a few seconds; Bobby suddenly grinned from ear to ear, the sunburned crow's-feet at the corners of his eyes growing more pronounced. A few moments later she was gone again, but Bobby, visibly trembling, suddenly said, "Tony! Watch my station," and promptly scooted out the back door.

Ordinarily, this alone would have been a momentous event. To be allowed to work the busy broiler station, to take the helm -- even for a few minutes -- was a dream come true. But curiosity got the better of all of us remaining in the kitchen. We had to look.

There was a fenced-off garbage stockade right outside the window by the dishwasher, that concealed the stacked trash and cans of edible waste the restaurant sold to a pig farm up-Cape, from the cars in the parking lot. Soon, all of us -- Tommy, Lydia, the new dishwasher and I -- were peering through the window, where in full view of his assembled crew, Bobby was noisily rear-ending the bride. She was bent obligingly over a 55-gallon drum, her gown hiked up over her hips. Bobby's apron was up, resting over her back as he pumped away furiously, the young woman's eyes rolled up into her head, mouth whispering, "Yess, yess ... good ... good ..."

While her new groom and family chawed happily on their flounder fillets and deep-fried scallops just a few yards away in the Dreadnaught dining room, here was the blushing bride, getting an impromptu send-off from a total stranger.

And I knew then, dear reader, for the first time: I wanted to be a chef.

Anthony Bourdain is the author of "Kitchen Confidential."