Is he worth all that money? Will these giant contracts ever stop? Is salary inflation driving up ticket prices? Ruining baseball? (Short answers: Yes, no, no, no.) 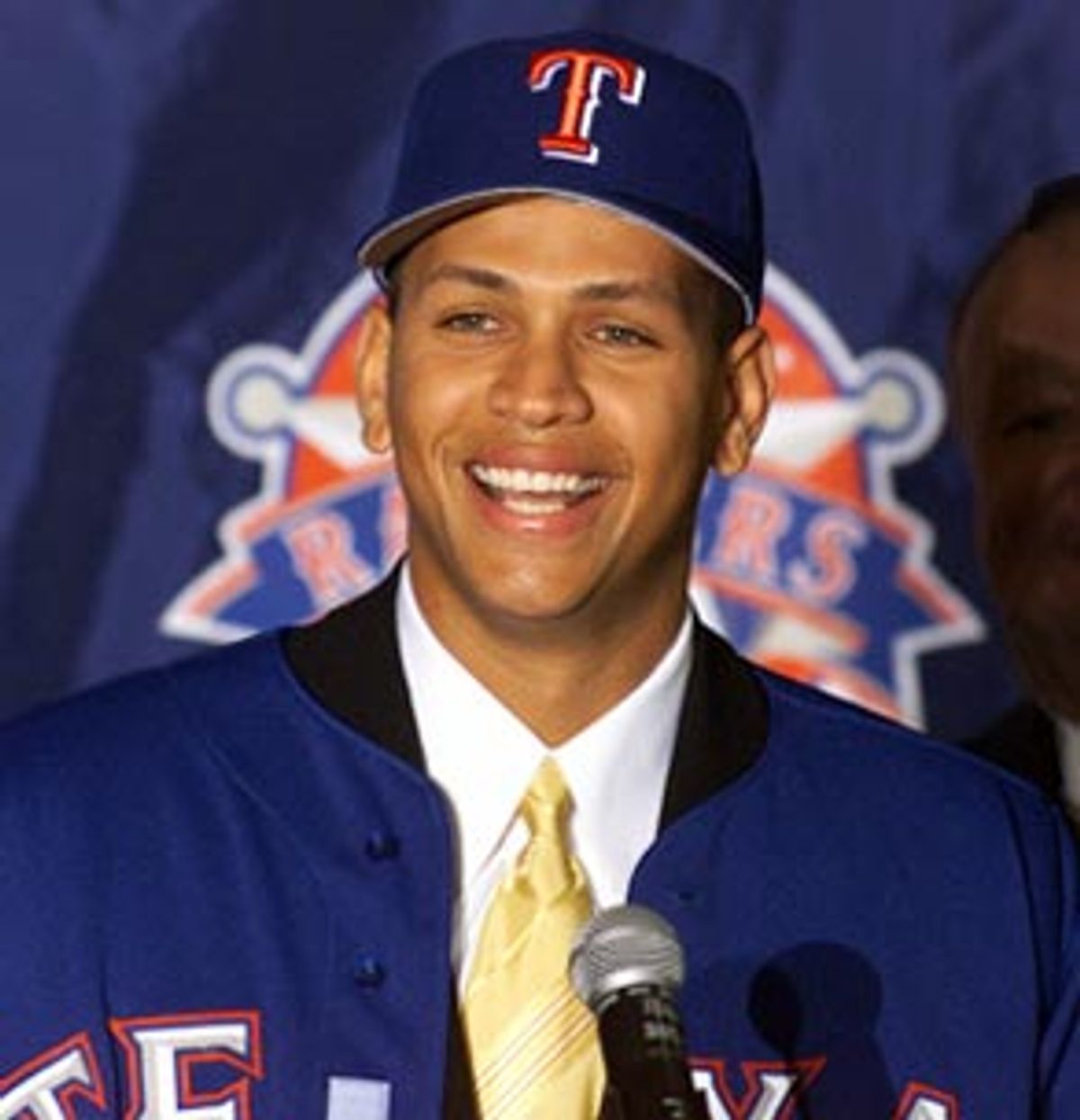 Alex Rodriguez's contract with the Texas Rangers has produced more e-mail than any sports-related event since I started with Salon, and most of them aren't replies to something I've written -- because I've scarcely written about the $252 Million Man yet -- but questions. There's no way for me to answer them individually, so I'll try to do it collectively. Sorry if I had to paraphrase yours beyond recognition.

When is it going to stop? If they continue to offer salaries like this, aren't major league teams going to be bankrupted?

To take the first question first, it isn't going to stop, and each time a new player gets a bigger contract people are going to ask that question all over again just as if they hadn't been asking it since Catfish Hunter signed with the Yankees in 1976. Or, to answer it another way, yes, it will stop, when the profits stop. To answer the second, I wouldn't worry too hard about bankruptcy. There's always someone out there willing to pick up a franchise worth at least $200 million.

What if it does happen? What if teams start going under?

That's Major League Baseball's problem. The game's powers that be are always talking about "the Game" and "the Industry," so let them treat it that way. Let them take steps to see that all of their franchises are financially sound. If they're not going to do that they have no business talking about "the Game" as if all the teams in Major League Baseball are of equal importance.

And you know what? Suppose Minnesota or Pittsburgh or Montreal (these being the three I hear mentioned most often in discussions of the sort) do go under? The world won't come to an end. If Major League Baseball doesn't care enough about them to keep them afloat and they lack the resources to compete on a major league level, then maybe they should go under.

That's a pretty heartless attitude. Is that kind of thinking really good for the game?

Hey, don't talk to me about it. If the owners don't care enough about the so-called small markets to share their revenues and keep them competitive, what do you expect me to do? Besides, who says they can't have baseball there? I mean, what's wrong with Triple A?

But is Alex Rodriguez really worth it? I mean, who can really be worth $252 million?

That depends on what you mean by "worth." If you mean will he sell enough tickets and beers to pay for his contract, then the answer is no. But the 10-year, $250 million cable deal the Rangers made with Fox probably couldn't have been made if the club wasn't going to get Rodriguez, so you might argue that the Rangers got that money because of him, gave it all to him, and that any tickets he sells are just pure profit for the team.

But he can't make the Rangers into winners all by himself, can he?

Well, who said he could? What he can do is put more games in the win column for them than any other player in baseball.

But you can't win without pitching, can you?

Oh, baloney. You win by scoring more runs than the other team. A-Rod will get you about 100 runs more than the guy he replaces at shortstop. What difference does it make if he produces 100 runs or prevents 100 runs? It's still 100 runs scattered over 162 games and should produce the same number of wins.

Then you're saying that A-Rod will put them into the World Series or at least in the League Championship Series?

I never said that. I do contend he'll produce more victories toward that end than any regular player you can name.

Does the acquisition of a player like Rodriguez increase the value of a franchise? Like building a new stadium did for the Orioles or the Indians?

You know, that's a very good question, and one that almost never gets asked. The sports press, like Oscar Wilde's cynic, tends to focus on the price of everything and the value of nothing. Obviously, a player's value is short-lived compared to, say, a baseball stadium -- though it's not inconceivable that A-Rod will still be packing in customers when some of the major league stadiums that are now considered chic have lost their allure -- but who can deny that teams regard their players as property and that the best players increase property values?

Let me toss out just one minor point: Don't you think that Rodriguez's presence in the Texas lineup for the next decade is going to sell a hell of a lot more T-shirts, jackets and caps than the Rangers might ordinarily be expected to sell? That's the kind of windfall that never gets mentioned when deals like this are discussed.

What about loyalty? How can fans develop loyalty when star players jump from team to team?

First of all, loyalty only comes into the equation when a player can choose. Rodriguez obviously feels no particular loyalty to Seattle, and there is really no good reason why he should. Maybe the 10-year deal with the Rangers will allow some loyalty to develop. In any event, I've never understood why having the same player back year after year automatically translates into loyalty. The loyalty of college fans is probably the greatest in sports when hardly any college player is on a team for as many as three seasons.

And can I raise another question? What fan really develops loyalty to a crappy team? Do fans of the Arizona Cardinals or Los Angeles Clippers really want to be loyal to a team with the same lousy players year after year, or do they want the team to acquire some better players? I don't think fans of those teams would complain about player mobility.

I would never give any player that kind of money, and certainly not Alex Rodriguez.

Good, then don't. What do you care anyway? It's not your money.

But it is my money. I'm the fan and I pay for those higher salaries with higher ticket prices and more expensive beer and hot dogs.

Oh yeah? I'll bet you two-to-one that ticket prices will go up in Texas. Take the bet?

No, because you're right, they will, just like the Lakers raised ticket prices when they got Shaq. That's because they believe they have a more attractive product to sell. It's up to you, the fan-consumer, to let them know if it's not true.

You can defend deals like this all you want, but at this rate fans are going to start losing interest. Smaller market teams can't afford to compete for players like Alex Rodriguez.

Now wait a minute: The Yankees and Mets didn't sign him, did they? It was the Texas Rangers. Now tell me: Before this deal, who regarded the Rangers as a big-market team? The Rangers found a way to go out and get that money and improve the team, and now, instead of being praised for it, they're being flogged by a press that seems bent on fan resentment.

So who determines that Alex Rodriguez is worth $252 million?

As always, the people who offered it to him. The free market.

This is America. Don't you think the Rangers are fools to pay that kind of money to a player as selfish, arrogant, and disruptive as Rodriguez?

Yeah, I saw how he disrupted Seattle last year. He almost disrupted them into the World Series. Personally, I'd tend to agree with you on the selfish, arrogant part. If I had him, it would be in spite of those qualities rather than because of them. But in the heat of a tight pennant race -- I have to be honest about this -- humility isn't the first quality I look for in my team leader.

By the way, while we're on the subject, the Rodriguez deal should have come as no shock. Alan Schwarz wrote in the March 15 Baseball America, "Assuming that Rodriguez will be the most attractive free agent after the 2000 season, he'll receive the most lucrative contract ever, one that could very well crack $200 million."

Schwarz went on to say that over the last decade, baseball's record contract (by average annual value) has been surpassed 16 times, by an average of 10 percent each time.

Since the 1994-95 strike, the record had been broken eight times in three years, so Schwarz speculated that it would be broken three or four times before Rodriguez signed his big deal. Applying an average increase of 10 percent to the top figure at the time (Kevin Brown's $15 million), Schwarz figured Rodriguez's new average salary would become $22 million to $24 million, and that the length of the deal for the 25-year-old -- given that the 34-year-old Brown could command seven years -- would be nine or 10 years. Multiplying it out, Schwarz predicted Rodriguez's new salary would be between $198 million and $240 million.

He was off by $12 million. In today's baseball economy, that's not even worth bending over to pick up.