Pro-choicers already on the defensive 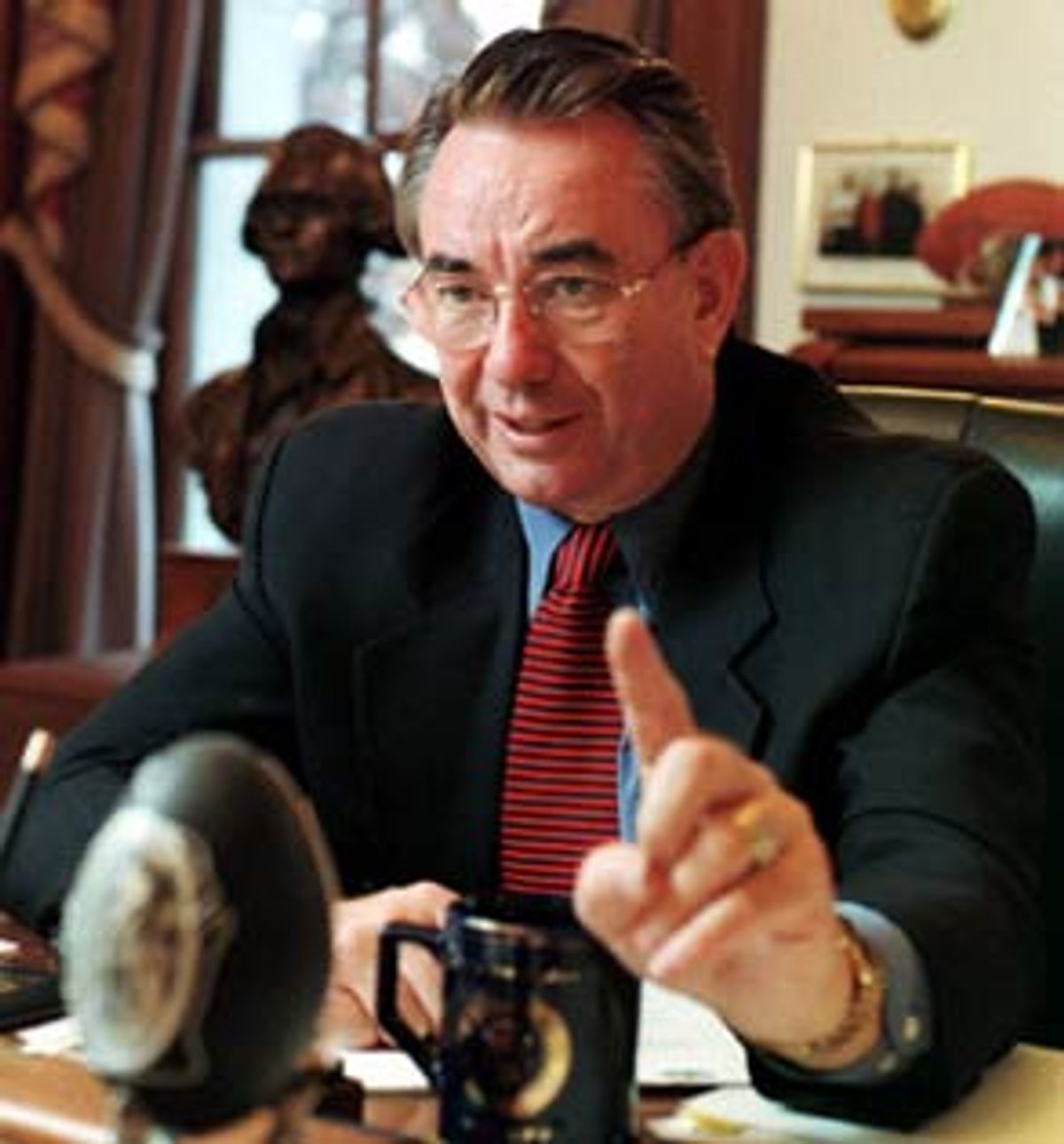 Washington's latest word, "bipartisanship," doesn't mean much to activists for whom there can be no compromise. Like, say, those who disagree as to whether or not a fetus is a human life.

Even before President-elect George W. Bush has been sworn in as our 43rd president, the abortion-rights community -- namely Planned Parenthood and the National Abortion and Reproductive Rights Action Group (NARAL) -- is preparing to kick out the jams and make him pick a side. The two groups are scheduled to hold a press conference Thursday morning to express their concerns about at least one of Bush's possible Cabinet secretaries.

As of Wednesday afternoon, the Bush transition team had received 35,150 resumes. The abortion-rights community has flagged one in particular: that of Gov. Tommy Thompson of Wisconsin, who has been mentioned as a probable pick for secretary of health and human services.

Though he has not yet been officially nominated, the pro-life Thompson's nomination has abortion-rights groups concerned. As governor, Thompson has supported a parental consent bill, a 24-hour waiting period and a bans on late-term abortions. Thompson's late-term ban mandated life imprisonment for doctors who perform the procedure.

Since the Republican Party now controls the White House, the Senate and the House, "Americans' rights to make their own choices about child-bearing are severely threatened, as threatened as any time in the last 27 years" (since the Supreme Court legalized abortion in its 1973 Roe vs. Wade decision), says Gloria Feldt, president of Planned Parenthood Federation of America.

So are pro-choice groups basically just screwed? "That's a good way to put it," says NARAL president Kate Michelman. "But the majority of people who voted, voted for Al Gore. That is a fact. So President-elect Bush has no mandate to take away the right to choose ... That's why I think President-elect Bush will be -- I hope -- tempered as he goes down the road."

She had better hope that, because trying to sandbag a nomination is not an easy process. The 50 Senate Republicans would only need to peel off 10 Democrats to vote with them to force a vote on a nominee. After that, the Senate GOPers would only need their caucus to stay unified to support a nominee Vice President-elect Dick Cheney, as president of the Senate, could break the tie.

And in all likelihood it won't come even close to that. "There's a very strong presumption in favor of the president-elect's nominations," says Sen. Arlen Specter, R-Pa., a supporter of abortion rights. "He's starting out a fresh term."

A senior Senate Democratic staffer seconds that opinion: "We owe a presidential nominee a degree of deference. The question is not whether he passes any sort of ideological test; the question is whether he's competent. This president is entitled to his nominees, provided they're capable, competent and demonstrate a capacity to perform their responsibilities."

The staffer put an additional, political spin on why 50 Senate Democrats assuredly won't back any NARAL plan to filibuster Thompson's confirmation away. "There are moderate Democrats and others who are pro-choice but who will say, 'This is a way for me to show I'm not crazy-left-wing on abortion issues,'" the staffer says.

Michelman insists that NARAL has yet to decide how it will approach the Thompson confirmation hearing, should there be one. "I never said to you that we were going to set forth a campaign to block a nomination," she says. "What I said is that, first and foremost, all members of Congress and the American people, as much as we can, must understand that Governor Thompson has a long record of opposition to a woman's right to choose and he will be in a signature positions to affect that right. Whether we actively campaign for his defeat is another matter."

Michelman acknowledges that it is a Herculean task to body-check a respected Cabinet nominee. "And we're not naive enough not to know that. But it is our responsibility -- and indeed it is critically important -- that we speak out about the potential harm that could come to women's health and women's rights as a result of these appointments, and the sub-appointments under these appointments."

Feldt acknowledges how difficult it would be to block the governor's confirmation. He is a respected leader and his legislative record on abortion is comparatively not so extreme, having supported -- as one Planned Parenthood executive allows -- various family planning programs other than abortion in the Badger State. And, pro-life groups point out, even Democratic leader Sen. Tom Daschle of South Dakota voted for a late-term abortion ban.

"We really need to sit down and talk with Tom Daschle," Feldt says. "We need to make absolutely certain that he will stand firm ... We have much work to do with him."

Originally, the pro-choice community expressed public concern over the possibility of Sen. Dan Coats, R-Ind., becoming defense secretary. "More than 100,000 women depend on military health insurance for health-insurance coverage, and since he [Coats] has a 100 percent anti-choice [and] anti-family planning voting record, we certainly would have some concerns about him," says Feldt. "But this is a moving train, and we have our main eye focused on HHS and the attorney general's office."

Until Montana Gov. Marc Racicot withdrew his name from consideration for the attorney general slot on Wednesday, NARAL and Planned Parenthood had targeted him as a threat to their cause, second only to Thompson.

Most important to the Planned Parenthood-NARAL agenda, however, is who will serve as Bush's health and human services secretary. The HHS secretary will regulate human embryo and stem cell research, administer Title X family planning funds -- which provide money for abortions as well as breast cancer screenings -- and will supervise the surgeon general and commissioner of the Food and Drug Administration.

"I think Governor Thompson is a first-rate guy," says Specter. "I've had a lot of dealings with him." Specter, who has defended pro-choice Gov. Tom Ridge, R-Pa., from efforts within conservative circles to block his nomination to any position in a Bush Cabinet, says that the same principle applies for pro-life nominees. "I would not use a litmus test for somebody who's pro-life," he says. "I'm certainly strongly advocating no litmus test for somebody who's pro-choice." Specter called such litmus tests "inappropriate."

Of secondary concern to the abortion-rights community is whether a Bush attorney general would enforce the Freedom of Access to Clinic Entrances Act (FACE), passed in 1994.

It's a tough bind that they're in. While Michelman and Feldt argue that the "American people" are on their side, for the first time since Roe vs. Wade became the law of the land, all three branches of the federal government are, essentially, pro-life.

And, Feldt says, "groups like the Christian Coalition and very stridently anti-choice members of Congress were quiet during the election in order to help Bush soft-pedal the issue and get elected. They are coming to collect their due now."

Even if Thompson is nominated and sails through the confirmation process, as expected, Feldt says that abortion will rear its head as an issue for Bush early on. A ban on partial-birth abortion -- which passed the House and Senate with Democrat support but was vetoed by President Clinton -- might be one of the first bills he signs. And by Feb. 15, Bush will have to make a decision one way or another on the "gag" rule prohibiting federally paid physicians from mentioning abortion as an option, which Clinton overturned by executive order.

"We're still determining what to do," Michelman says. "The first step is to inform and sound the bell and say, 'These are the positions of these critical nominees.' What we do beyond that we have not decided yet."