The family that steals together

Our Christmas tradition has shades of Hunter S. Thompson. 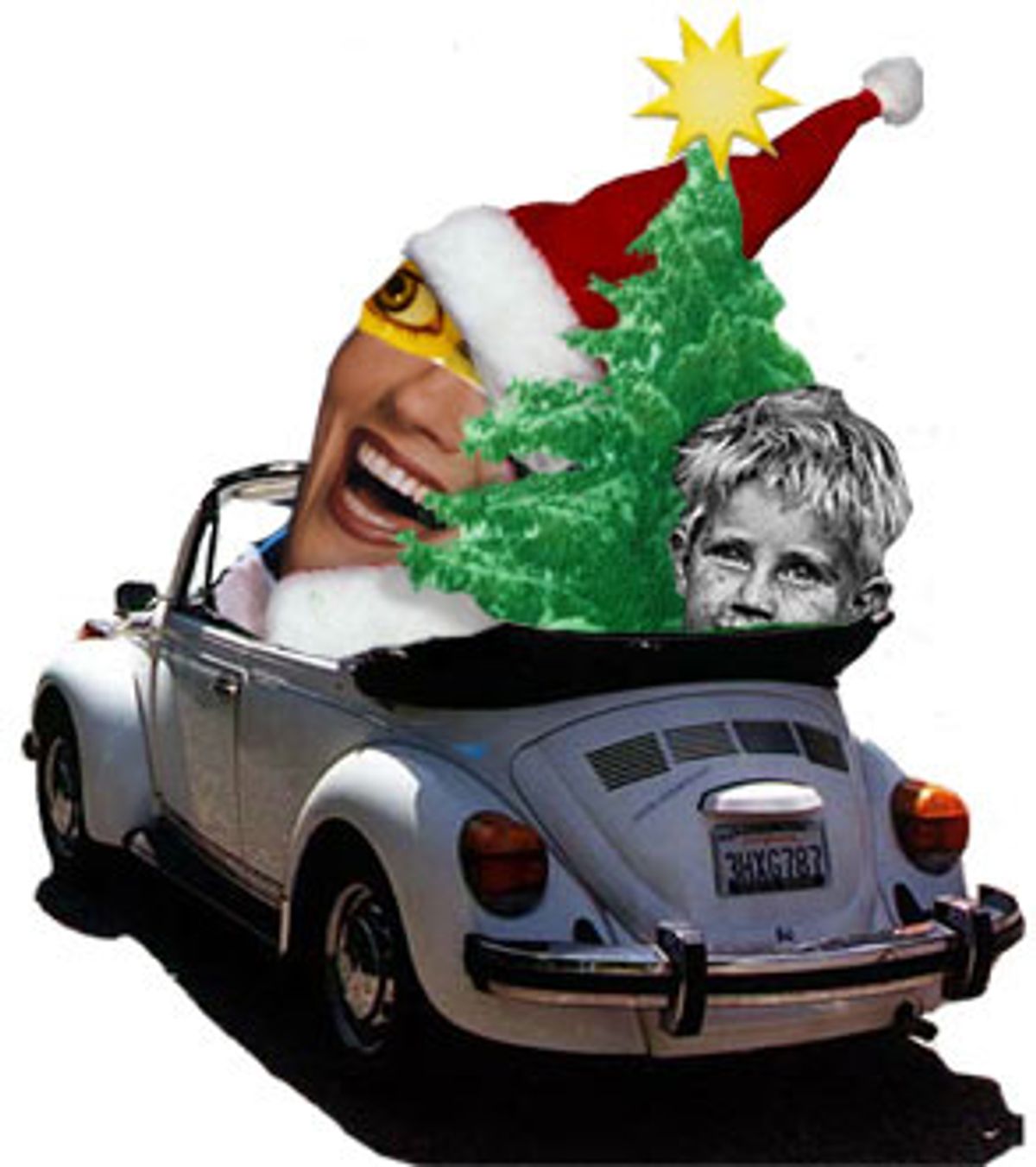 Families have different traditions when it comes to getting a Christmas tree. Some travel miles to chop one down themselves. I have found this to be an overrated activity, especially when it's cold or rainy and the shortest tree is 12 feet tall. Other families string popcorn and cranberries to adorn their tree. Given my attention span and lack of manual dexterity, I'm sure I'd stab my finger with the needle and end up covered with the popcorn I was supposed to be stringing. My friend Claire insists that she must buy her tree on her brother's birthday. My family, too, has a Christmas tradition, but it's a little hard to explain.

Let's begin here: When my son, Jody, was about 10 years old we went to buy a tree. I got tired of waiting for the picky couple ahead of us who were monopolizing the attendant. I had found my tree with no trouble. I was ready to pay and go, dammit.

I decided I would just take the tree to the car myself, then come back and pay for it. Only I didn't. Playing the martyr, like Jesus with his cross, I dragged the tree to my car and popped it on the roof. Jody caught the rope on the other side as I tied it on. I looked over my shoulder and saw that the lot attendant was still talking to the pain-in-the-ass couple. My irritation turned into something else, something wicked and a little fun. I told my son to hop in the car -- no small feat, since I had tied the doors shut with the rope. But we both managed to get into the car and I drove off the lot. I had no idea what I would say if I was caught, but I didn't think I'd go to jail. Nor did I think of the potential damage to my son's morals.

Jody had a big grin on his face, much bigger than the smile he had the year before when we went to chop down a tree in the rain and my husband and I argued all the way home about how crooked it was. This year Jody was beaming like the star of Bethlehem. "That was so cool, Mom," he said. We had bonded.

I guess my son held fond memories of that day, because his only request for the following Christmas was that we steal a tree again. And I went along with it because it was now this thrilling secret we shared. We looked forward to the adrenaline rush the way runners look forward to their endorphins. We were hooked. But it was going to be harder because I was a few months clean and sober, and knowing about the theft in advance made me nervous. I was afraid that without the spontaneity it wouldn't be as much fun, or that we'd get caught for sure.

But we had just as much fun, and we didn't get caught. I went to the store the following day and gave someone there the money, explaining that I had forgotten to pay the night before. My son was happy and I didn't have any guilt.

By the third year, when Jody was 13, I had decided to nip this habit in the trunk. I told him we just couldn't steal again. My usually stoic son was crestfallen. He had really looked forward to that year's escapade because I had a Volkswagen convertible and he thought it would be cool to make our getaway in that car. So we got the tree. As we were driving down El Camino Real in the rain with the tree sticking out of the back, my son reached over and grabbed my arm, and with pure delight on his face, he yelled through the wind to me, "This is such a Hunter Thompson moment, isn't it, Mom?"

My son is 26 years old now. This year I went out and stole the tree alone, in memory of Christmases past. But this really is the last year, honest.