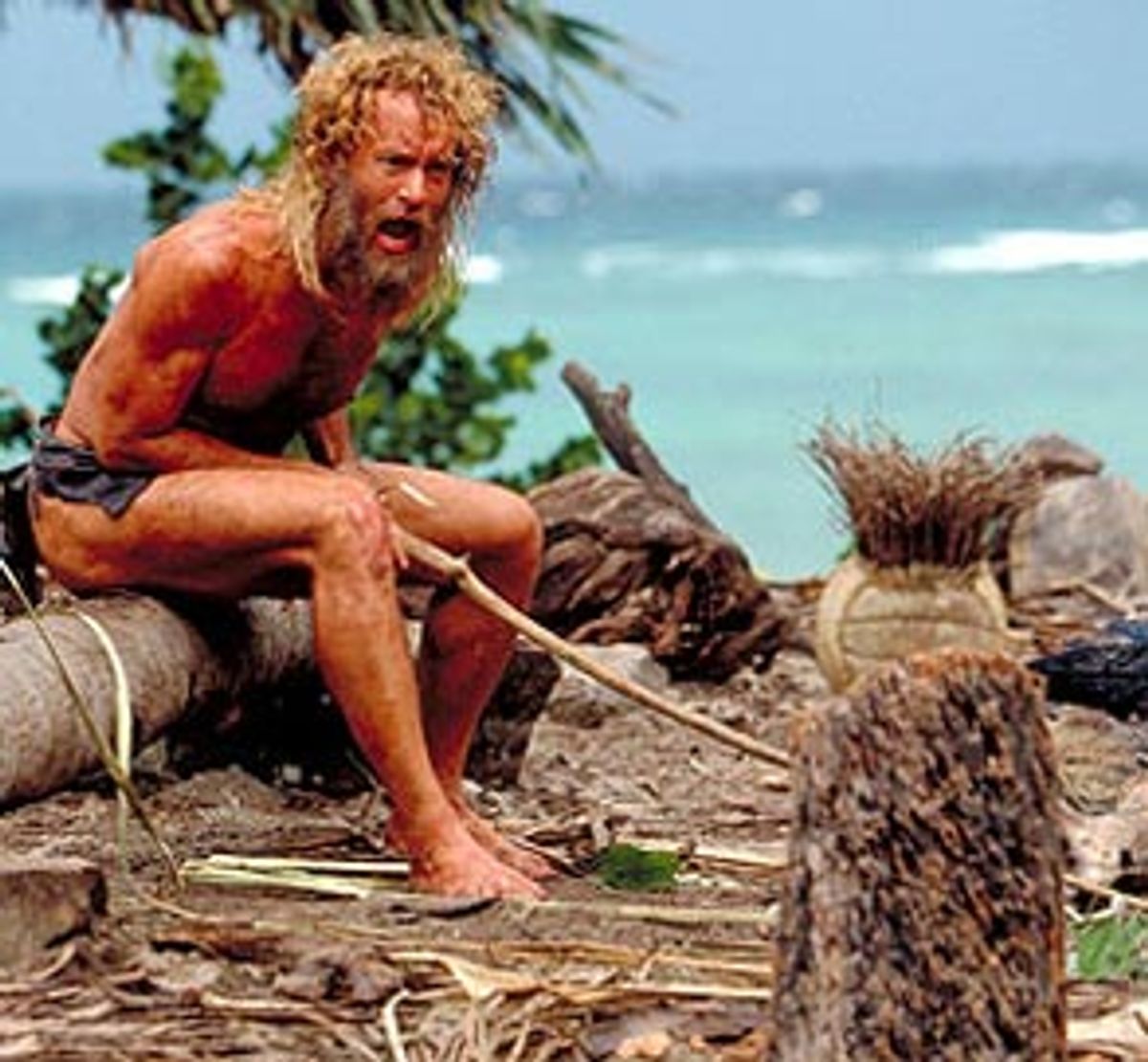 Melancholy will never be a trend in movies -- it's not the sort of thing that packs theaters. And how exactly do you market it? That may be why the trailers and pre-release hype for Robert Zemeckis' "Cast Away" made it look so frightfully inspirational and, frankly, dismissable: Tom Hanks gets marooned on a small tropical island, the sole survivor of a plane crash. Any sane person who has seen a movie in the past 10 years -- or at any point in his or her life -- would be justified in thinking it's probably an uplifting movie about triumph over adversity, the indomitable human spirit and other such nonsense.

But then, aside from the fact that we should all know better than to make judgments about movies based on trailers and ad campaigns, one of the great pleasures of moviegoing is being surprised. "Cast Away" is about triumph over adversity, but only in the roughest sense. Anyone who has seen the trailer knows that Hanks' character survives his desert-island stint and comes back to civilization. But there's no way to foresee what Hanks, an astonishingly gifted performer who in recent years has taken nothing but big-ticket, overblown prestige roles, has done with this part.

Hanks has scaled everything back -- every potentially overwrought expression or gesture, every bubble pocket of emotion that might normally be blown up large -- to forge a gossamer-tough bond of intimacy with his audience that few actors have the skill or subtlety to achieve. He works not in tides of feeling but in tide pools, and their stillness is devastating. "Cast Away" is a sad movie of the sort that Hollywood almost never makes: not three-hankie sad, not "go have yourself a good cry" sad, but the kind of thing that, if you let it in deep enough, can send a shudder to your very soul. It's mournful and troubling in a way that goes beyond ordinary movie manipulation. It burns clean.

"Cast Away" is a mainstream feature, conventionally made, and it offers few real artistic surprises outside of Hanks' performance. At its most predictable, "Cast Away" is exactly the movie you'd expect the post-"Forrest Gump" Robert Zemeckis to make (and a movie far, far removed from the delectable nastiness of his 1980 "Used Cars" or his 1992 "Death Becomes Her"). It comes off as potentially inspirational, possibly a little hokey, but infinitely well crafted and well acted.

"Cast Away" begins with so much formulaic portent that it took longer than usual for me to adjust to the movie I was watching rather than the one I expected to see. Hanks' character is Chuck Noland, a FedEx systems engineer who travels the globe to various FedEx offices, dispensing nuggets of bizspeak like "We live or die by the clock," a line that's obviously a setup for the long stretches of solitary time that Chuck will soon have to endure. Chuck enjoys being on the go, but he's less happy about being away from his girlfriend, Kelly (Helen Hunt). On Christmas Day he's forced to leave her to travel to the Far East on a last-minute assignment. The FedEx plane crashes en route, and he finds himself washed up on a remote island with little more than the clothes on his back -- and one shoe missing at that.

Hanks' Chuck doesn't make much of an impression in the movie's first half-hour. He's one of those bland, pudgy, time-is-money guys, nice enough, but not anyone you'd want to spend most of a two-hour-and-15-minute movie with, let alone end up on a desert island with. But after the crash sequence -- which is terrifying even for those who aren't normally afraid to fly, a roaring, crunching nightmare whose details are all too believable -- "Cast Away" takes a quietly shocking turn.

When Chuck washes up on the island, it's easy enough to envision a boy's adventure retooled for the early 21st century, in which a man reconnects with his most primitive survival instincts and plumbs depths of self-reliance he never knew he had. And that's certainly part of the movie's appeal. For a few days after the crash, half a dozen or so errant FedEx packages float up on the shore, and Chuck collects them and stashes them away, ostensibly for a time when he really needs them. When he finally opens them, after facing assorted challenges that include learning how to crack open coconuts, he's surrounded by a motley mess of apparently useless items: a pair of ice skates, a volleyball, a hideous tulle party dress, a package of videotapes. One of the movie's delights -- and "Cast Away" does have its delights -- is the way Chuck finds a use for everything; even the ugly party dress ends up as part of a fishing net.

Once "Cast Away" gets rolling, it drifts away from being a rousing survival tale and bobbles into less easily charted waters. Chuck's adventure is a lonely, desolate one, and that's constantly reaffirmed by cinematographer Don Burgess' massive ocean vistas and star-spattered skies. Zemeckis, screenwriter William Broyles Jr. and Hanks don't make Chuck's self-reckoning just one angle of the picture -- it's the very heart of it.

"Cast Away" is often hilarious in a voyeuristic way. What do we look like when there's no one around to see us? Hanks plays the role as if he's completely unaware that anyone is watching, and his naked unselfconsciousness is what draws us in. One of Chuck's big tasks is to figure out how to make a fire by rubbing one piece of wood against another, and Zemeckis draws out the sequence almost interminably. He's not interested in triumph but in process. It takes Chuck forever to figure out how to make that fire, and when he finally does, the victory dance he performs around the flickering flames is one of the movie's most enduring jokes. "I have made fire!" he intones, leaping and twisting and shaking his tubby Buddha belly. "Look what I have created!" Then, like a ridiculous frat boy, he segues into an impromptu rendering of "Light My Fire." It's simply the right thing to do at the time, the punch line to a joke that has no audience to hear it.

But that's only the beginning of Chuck's island life, and making that fire is the smallest of his achievements. What's more astonishing is the way he creates a miniature civilization for himself in the form of "Wilson," the friend he makes out of the volleyball he has rescued from the wreckage. Wilson comes into being accidentally: Chuck cuts himself while he's making his first fire and, in a semicomical temper tantrum that's as much of a release for the audience as it is for him, he grabs the volleyball in his bloody hands and flings it as far as he can. Later, he recovers it, and traces a simple face into the bloody smear.

Chuck talks to Wilson constantly. He tells him all about Kelly, showing him the pocket watch that also contains her picture, a talisman that he clings to for the four years he spends on the island. He recites her attributes as a way of keeping his old connections alive. As the years pass, Chuck becomes nearly unrecognizable. He's gaunt, with sun-bleached, Grizzly Adams hair, and we notice that Wilson has changed too. He's slightly saggy and deflated and has a thatch of straw springing from his forehead.

Chuck has obviously made Wilson look more and more like himself, and the metaphor is obvious. After all, Wilson sprang to life from Chuck's own blood. Wilson is company for Chuck, but he's also Chuck's way of holding onto his sense of self -- there's no such thing as individuality when there are no other human beings to compare and contrast yourself with. By the time Chuck escapes from the island, it doesn't matter that he's on his way back to civilization; he's already lost to himself, the embodiment of Elvis Costello's man out of time. On his journey back, he encounters a whale that magically rises out of the water and, for an instant, regards him with one discerning and curious eye. The connection isn't corny; the whale seems no less foreign and inhuman than Chuck.

"Cast Away" is most unsure of itself in the sequences that frame Chuck's island exile. Hunt brings the right amount of crispness to the role of Kelly, and her bewilderment at trying to fit the returned Chuck into her life, after she'd given him up for dead, is gently touching. There are numerous moments when "Cast Away" threatens to go for the cheap, happy ending, and although Zemeckis steers away just in time, the ambiguous note that the movie finally lands on doesn't feel quite right, either.

But Hanks is just right in every frame. On its surface "Cast Away" looks like a treatise on our need for community, but it's something much finer and infinitely more wistful than that: an affirmation of our eternal solitude, whether we're in the company of other human beings or not.

How do you play a man who has been subtracted from? At one moment, as Hanks makes his way back toward civilization and Kelly's name is mentioned, his eyes show us that he has drifted far off from any course of conventional or expected thought. Kelly is no longer real to him, and you wonder how long it will be until anything is ever real to him again. Hanks might have taken the easy way out and played this lost man as a blank, a character outside of ourselves to be observed from afar and pitied. Instead, he works the miracle of inviting us inside his troubled shell, where loneliness sounds like the rush of the sea, and feels like company.