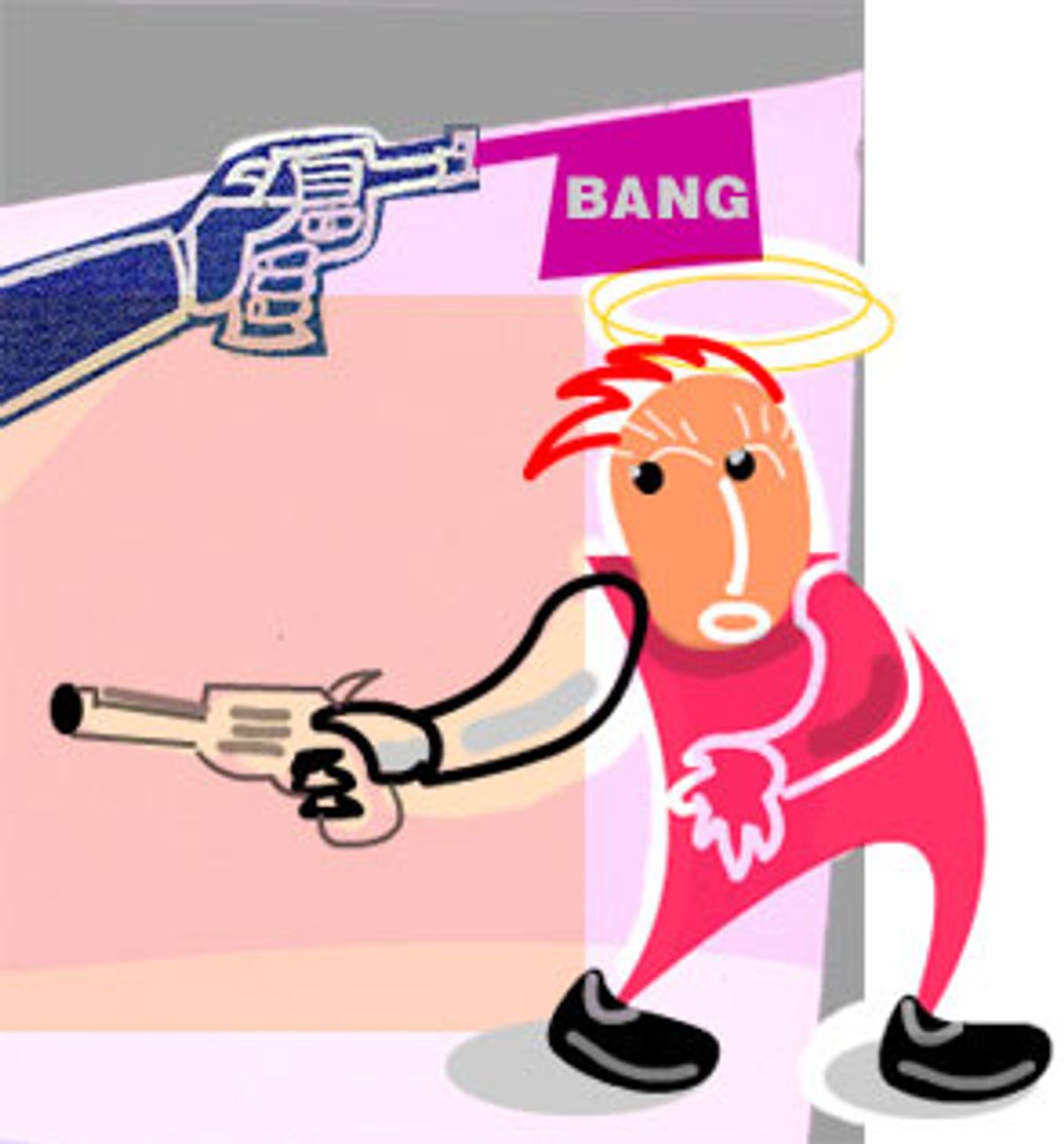 One of my happiest childhood memories is sitting around the kitchen table on a quiet evening with my father and little brother, playing Russian roulette.

This family bonding experience was made possible by Mattel, makers of the Fanner 50, a Western-style pistol designed to work like a real revolver. Open the loading gate, drop in six spring-loaded brass cartridges called Shootin' Shells and gray plastic bullets would fire out the barrel at eyepopping velocity. By affixing a circular Greenie Stickem Cap on the base of each shell, you got a loud report and real gunsmoke each time you put the barrel to your temple and blew yourself away.

By golly, they don't make toys like that anymore. It sounds pretty sick today, but we were a close family. My dad had four sons, none of whom grew up to be soldiers, cops, criminals or gun nuts. None of us ever became hunters, either, but perhaps we got it out of our system early, because every Christmas morning we'd hunt our dad like an animal, armed with the dart guns we always found stuffed in our stockings. Our quarry was hopelessly outnumbered, but he had learned survival tactics from Imperial Japanese Marines in places called Guam, Saipan and Tinian. Even so, one time I was able to sneak up on him and shoot him in the back with a rubber-tipped dart. He was so proud.

These battles raged for days, until we lost all our ammunition. At night, just at the point of slumber, I could picture a dart heading straight for my forehead, and I'd bolt awake, heart pounding.

Most of the war toys in those days were hideously dangerous, but back then, nobody seemed to notice. This was 1959, even before Lawn Darts. It would not have occurred to the average person to contact a lawyer over some obviously self-inflicted injury, nor would a reasonable jury reward the stupidity of dummies who copped a hemorrhage off a child's toy. You paid your money and took your chances, and Darwin take the hindmost. Times have changed a lot, obviously.

Let me sketch in some background. We had just moved up to Oregon from Southern California, hugging the rocky coastline until the sun was a dim memory of warmth. At first we were so poor that I foraged for huckleberries to augment my breakfast of lumpy boiled oatmeal and hot chocolate, both burnt on a wood cookstove. I recall a squalor that would have shocked Steinbeck and a crushing poverty, but we were happy. Late at night, we could hear our parents laughing in their room.

The small towns of the Oregon backwoods were extremely violent places. Loggers had regularly scheduled fistfights downtown on Saturday nights, and as a child of beatniks, I was beaten like a rented mule by their spawn, my new classmates. The very name Doyle Scroggins still makes my fists ball up involuntarily, although I am indebted to him for punching me out daily until I learned to fight back. But not once did I ever imagine shooting him or any of my other schoolyard chums with a firearm; my rich fantasy life had no bearing on ugly old Reality.

This was long before television began to blur those lines, showing real firefights in Vietnam on the evening news and fake ones in America later in prime time. Death-by-gunfire became a central theme on every dramatic TV show, spamming an entire generation with bloodshed.

On Christmas Day, 1960, I ripped open my present and found a complete kit of weapons, a set that Mattel dubbed the "Buffalo Hunter." It consisted of a long rifle called a "saddle gun," a Fanner 50 and holster, plus a plastic knife so obviously bogus that I immediately gave it to my brother Jon. These things in the original box would easily fetch upwards of $1,500 at an auction today. The plastic knife alone would be worth $100.

I grew up around guns, dozens of them, and not one of them was real. My parents owned no actual firearms, not even a deer rifle, making ours a rare household in rural Oregon. But everything I needed to know about gunplay I learned directly from black-and-white television, and its lessons in death were consistent. With the exception of yellowbellies, sodbusters and old-timers, all male characters on TV carried pistols, rifles, derringers and/or sawed-off shotguns; those who didn't usually got rubbed out before the first commercial.

The era of the adult Western began in 1952 with the simultaneous debut of "High Noon" and the radio show "Gunsmoke," followed by "Shane" in 1953. As the myth of the Reluctant Gunfighter Forced to Take a Stand evolved, gunfighters became less reluctant to slap leather, until Hollywood finally quit being coy and began to celebrate the fast draw, the dead eye and an occasional knife quivering in someone's chest.

Television programmers took it from there. We saw a) that the whole world was full of bad men; b) that such people cheated, lied, ambushed, fornicated and generally flouted established rules of fair play; and most importantly, c) that this class of individual was always significantly improved by death. For that, bullets worked perfectly, often allowing the malefactor time for a brief speech of repentance and remorse before a sucking chest wound completed his rehabilitation.

In those bygone days, I mowed down hundreds of imaginary human beings in the forest behind our house, smiting the enemies of democracy without regard for ethnic background. This body count did not even include the rustlers, horse thieves, snide and surly gunfighters, rude drunks with itchy trigger fingers who had the temerity to crowd me at the bar of a dusty saloon or the usual assortment of dirty stinking heathen savage redskin Custer-killers.

Out of curiosity, I asked my dad if he had ever shot any enemy soldiers. In those prepubescent years, I'd been reading piles of war comics, including "Sgt. Rock" and other illustrated classics of martial history, and in my inchoate system of moral values, killing in war was no big deal. My father's answer didn't chill me as much as the way his face went blank when he said it: "Far too many." Pressed for details, he clammed up. "We'll talk about it someday."

Someday came years later, when he spoke of his deep regret for taking life so indiscriminately and even being a witness to the slaughter, let alone a participant. At 19 years old, he appears briefly in archival war footage of the Pacific Theater, with two head wounds sloppily bandaged. He had sent so many Buddhists into the Void that he returned from the war committed to learning the principles of Eastern thought, and he spent the rest of his life doing so.

His name was Mac. He died a few years ago at home, at the end of a powerful and good life. Mac was proud of the fact that none of his sons ever had to fire a shot in anger or take a human life, although three of us have served in the armed forces.

Mac had no father of his own for a role model, but he studied the science of fatherhood with a beginner's mind. When we asked him questions, it was apparent that he was paying close attention, listening to our lives. One time I parroted a philosophical dictum from Davy Crockett, spouted from the lips of Fess Parker hisself -- "Make sure you're right, and then go ahead." Mac instantly jumped on it: "Yes, but how do you know, beyond any doubt, when you're right?" Over the past 40 years, that question has given me sufficient food for thought.

One evening, as my brother Jon and I were relaxing after a hard day of plugging each other and our playmates, Mac asked to see my Fanner 50. At the kitchen table, he removed all but one of the cartridges, slapped the loading gate closed, and spun the cylinder. "You guys want to play Russian roulette?"

Boy, did we. We didn't know exactly what it was, although I'd heard the term before, probably on TV. Mac went first, ignoring the canons of weapons safety by putting the muzzle to the side of his head -- Click. Then it was my turn -- Click. Jon, 8 years old and smiling like Howdy Doody, also missed the bullet. Out of turn, I grabbed my revolver, put the barrel to my third eye, and squeezed the trigger: Pow! The three of us just about died laughing. My mother came into the room, sniffed at the manly stink of cordite, covered her eyes, shook her head and left.

We played that deadly game for hours. In violation of all the laws of chance, I was the loser every time. This got a little eerie, because it didn't seem to matter how thoroughly we spun the cylinder or in which order we took our turn. I got "killed." It was weird, and at the time, hilarious.

But afterward, Mac made me promise never, ever to play Russian roulette again. "You've got the wrong kind of luck for it," he said.

And there the lesson stayed for years, dormant and pointless, until the darkest night of my life, when I was alone with a Colt revolver and a single .38-caliber bullet. Just as I dropped the cartridge into the cylinder, that promise came back to me, as well as my dad's comment on Crockett's Axiom. I flushed the bullet down the toilet, threw the gun in the garbage and went to bed. The next morning dawned, and things began to improve.

Jeff Taylor has worked in product design since 1977. For the past ten years he has been an independent contractor specalizing in custom integrated circuits.