"The House of Mirth"

Like a John Singer Sargent portrait come to life, Gillian Anderson blooms in the middle of this careful version of Edith Wharton's classic. 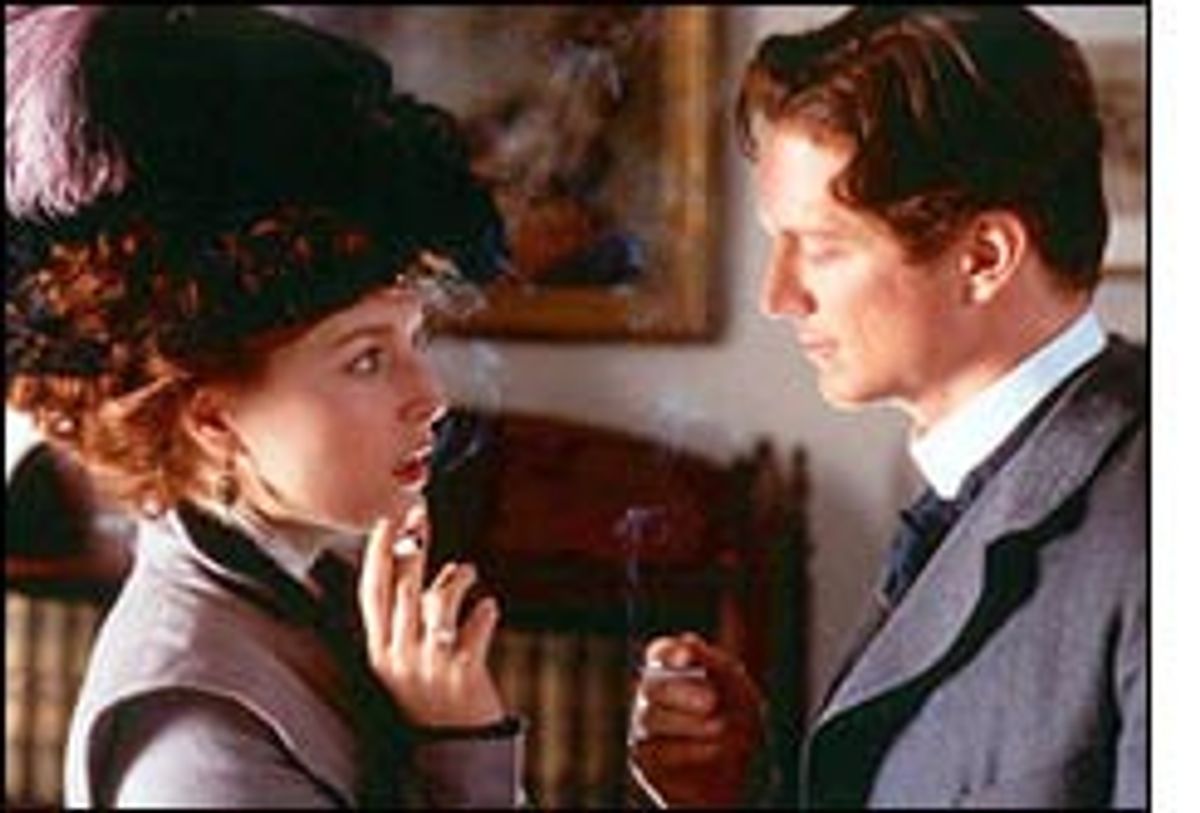 Edith Wharton's 1905 "The House of Mirth," ostensibly a novel about early-20th century New York aristocracy, is really an outer-space story, and intuitively at least, director Terence Davies seems to know it.

In bringing Wharton's book to the screen, Davies takes care to get all the trappings right: the depressively glittering balls and parties of turn-of-the-century Manhattan society life, the faux-rustic opulence of the country homes of the rich, the weird formalities and subtexts lurking behind the way a woman might slip her daintily gloved hand into that of a man. In Wharton's view, and in Davies', it's an atmosphere that's welcoming on the surface but laced with poison gas, a precise arrangement of molecules that seeks and finds and chokes the life out of foreign creatures, like Wharton's great heroine Lily Bart, who need air and light and love. It takes one exquisite alien to play Bart. Davies found her in Gillian Anderson.

Davies' "The House of Mirth" is nothing like a science-fiction movie, of course, except in the way it uses atmosphere to impart a creeping pallor of claustrophobia and even menace. What's clear from the first frame -- as it's clear in Wharton's novel -- is that Lily is a creature who just doesn't belong in this world; what's heartbreaking is that she's convinced she does.

The trick of the story, though, is that we're not really sure where Lily belongs; Wharton's conclusion is that there are no definable economic, social or spiritual strata that are quite right for her, and Davies' movie, with all its bleak elegance, captures the essence of that rootless restlessness. A stunningly beautiful but unmarried woman of 29 with dwindling prospects, Lily has been raised to believe she deserves luxury. So she lives beyond her means, relying largely on the grudging charity of her elderly aunt, Mrs. Peniston (Eleanor Bron). What Lily lacks in money she makes up for in tricks of language and coquetry: She can turn any encounter into a flirtatious checkmate. Yet her game playing, as Wharton wrote it and as Anderson plays it, isn't rooted in unkindness. It's more a special brand of freewheeling inventiveness, such that her would-be love interest and sometime nemesis Lawrence Selden (Eric Stoltz) is dazzled by it. "I always like to see what you're doing," he tells her only half-teasingly. "You're such a wonderful spectacle."

To keep herself afloat financially, Lily needs a husband badly, but she's unsuccessful in landing one because, deep down, she knows she doesn't want one. She's most attracted to Selden, a lawyer of modest means who lives for books and art and a warm fire. But not even Selden is a haven for her -- he proves himself capable of shattering coldness. And after Lily unwittingly puts herself in a compromised position with a married friend, Gus Trenor (Dan Aykroyd), she finds herself having to make her own money to support herself.

Davies understands that Wharton's book isn't a rallying cry for women's emotional and financial independence. It's far more subtle, and a lot less cheerful, than that. But the story continually affirms the value of that independence, solely by showing us how tantalizingly it's kept out of poor Lily's reach.

Davies captures something of Wharton's reserved warmth and graceful rhythms in the way he sets Lily spinning on her slow spiral to tragedy. He takes a few liberties with the story, condensing, for example, two of Wharton's original characters into one. His "House of Mirth" is a stately movie, sometimes too much so, moving with the speed and sprightliness of a dowager aunt, and the dialogue -- much of it taken directly from the novel -- is sometimes stiff and awkward.

But Davies (with the help of cinematographer Remi Adefarasin) does an impeccable job of showing us, in the movie's first half, both the hypnotic comforts and the deadliness of the life Lily aspires to, with its picture-perfect drawing rooms and artificially vivacious parties. The second half is darker and more visually somber, as Lily struggles to keep her life together. But that glumness makes it clear that this less-glamorous existence isn't right for Lily, either. She's an exotic bird, unfit for the grime and filth of the workaday world but far too extraordinary to be serving tea to rich, dimwitted gentlepeople. Lily, too modern, too vital and too exquisite, fits nowhere, in no specific society, time or place.

"The House of Mirth" finds its best footing in the shadows, like a muted shimmer of light nestled in the dark, silken folds of a John Singer Sargent painting. (It's worth noting that Davies cast Anderson after seeing some still photographs of the actress that reminded him of Sargent's portraits.) Davies' touch is too delicate at times -- a bit more forcefulness would keep the movie from slipping into lethargy -- but he does allow his actors an expansive canvas on which to work, and all of them leap to the challenge.

Laura Linney, as Bertha Dorset, the woman who takes advantage of Lily's uncertain social position to use her as a pawn in a devious game, is like a barracuda in Parisian silks; her liquid-sun smile is a chilling mask for her treachery. Jodhi May brings just the right amount of forlorn jealousy to the role of Lily's plain cousin, Grace Stepney. Bron's Mrs. Peniston is an imposing figure, but one whose simple motivations (she must maintain her dignity at all costs) are clear and sometimes amusing. With her steely pompadour and impatient pronouncements disguised as requests ("Lily, you can read me the obituaries!"), she's like Camille Paglia on quaaludes.

But it's the men in Lily's life who have the biggest effect on her, not because her life revolves around them but because they all wish that it could -- their weakness is a key feature of their cruelty and cluelessness. As Trenor, the man who believes he has "bought" Lily by making a simple financial investment for her, Aykroyd is shiveringly menacing, down to the way his sense of entitlement booms forth in his hearty, too-loud voice. Anthony LaPaglia makes a sympathetic and believable Sim Rosedale, the Jewish outsider who's also jockeying for a place in society but whose money (not to mention his sex) means he'll have a better shot at gaining it than Lily will. Rosedale's motives for courting Lily are mixed and his manners are crude, but LaPaglia's performance cuts directly to Rosedale's innate decency.

Stoltz plays Selden, the most maddening character of all for the way his emotional ineffectuality hides so safely behind intellectual pomposity, as a kind of waxen sex symbol. It's a canny, cool performance: You can see why Lily would be drawn to his sly, appraising smile, even as it's obvious that his character is only sterling, while hers is stronger stuff.

Anderson's Lily is the kind of heroine who earns our protectiveness by never begging for it; it's an astonishing performance. With her milk-white skin and berry-ripe lips, and her effortlessly graceful carriage, she's the kind of girl who would make an admirable decoration on some fine gentleman's arm. But there's a liveliness and a knowingness about her eyes that set her apart from her peers. In an early scene, as she shares a cigarette with Selden, the tendrils of smoke frame her appraising gaze. The moment is time-stoppingly sensual, but Anderson roughs it up a bit; she's sexually predatory in a vaguely prickly way, a gorgeous creature who's inherently affronted by the idea that she should have to entrap, rather than simply enchant, a husband.

In a later scene, the camera focuses on her in the split moments before and after she unexpectedly catches sight of Selden, and in that tiny window of time, like a stop-motion photograph of a flower turning its face to the sun, her features register a shift from deeply troubled self-involvement and confusion to distilled, radiant pleasure. It's not that she expects Selden to save her; it's simply that in looking at him, she finds a way out of herself.

But there's also plenty of showbiz in Lily Bart. You see it when she takes part in a dinner party tableau as a living re-creation of a Watteau painting. A curtain opens to reveal Lily reclining in a voraciously resplendent white dress, looking as if she could eat the male half of the admiring crowd alive. By the picture's end, though, as Lily finds her life more difficult to navigate, her vibrant beauty may be muted, but it's never vanquished. In the last portion of Davies' film, Anderson is shot as a symphony of grayish-blue shadows, but it's impossible for us to mistake Lily's somberness for any kind of redemption. Anderson plays her as a woman who doesn't need to be redeemed; she needed only to be understood, and the men and women around her failed miserably. She was undone by the wrongness of the air around her.

Anderson and Davies put me so squarely in Edith Wharton's New York that I left the theater not quite knowing where I was. Since I'm lucky enough at a moment like this to actually live in New York, I walked along the southern edge of Central Park, where I could see the beaux-arts lampposts -- authentic relics of Wharton's Manhattan -- glowing among the nighttime winter-cold trees. There were horses, too, lined up along the edge of the park with their hansom cabs attached, but in the darkness their smell was more vivid than their rough outlines.

Which century is this again? Wharton's story, and Davies', takes place at the opening of a different one, one that held forth all kinds of promises, some of which it at least partially fulfilled, especially for women. But as Anderson plays her, Lily Bart isn't any kind of feminist symbol; she's simply a woman who doesn't fit, regardless of when and where she lives or of her place in society. This early-21st century air might have killed her, too. And yet I understood completely why she'd want to breathe it in. After all, what else is there?