Growing tensions along the border between Kosovo and southern Serbia could mark the first challenge for President-elect Bush's foreign policy team. 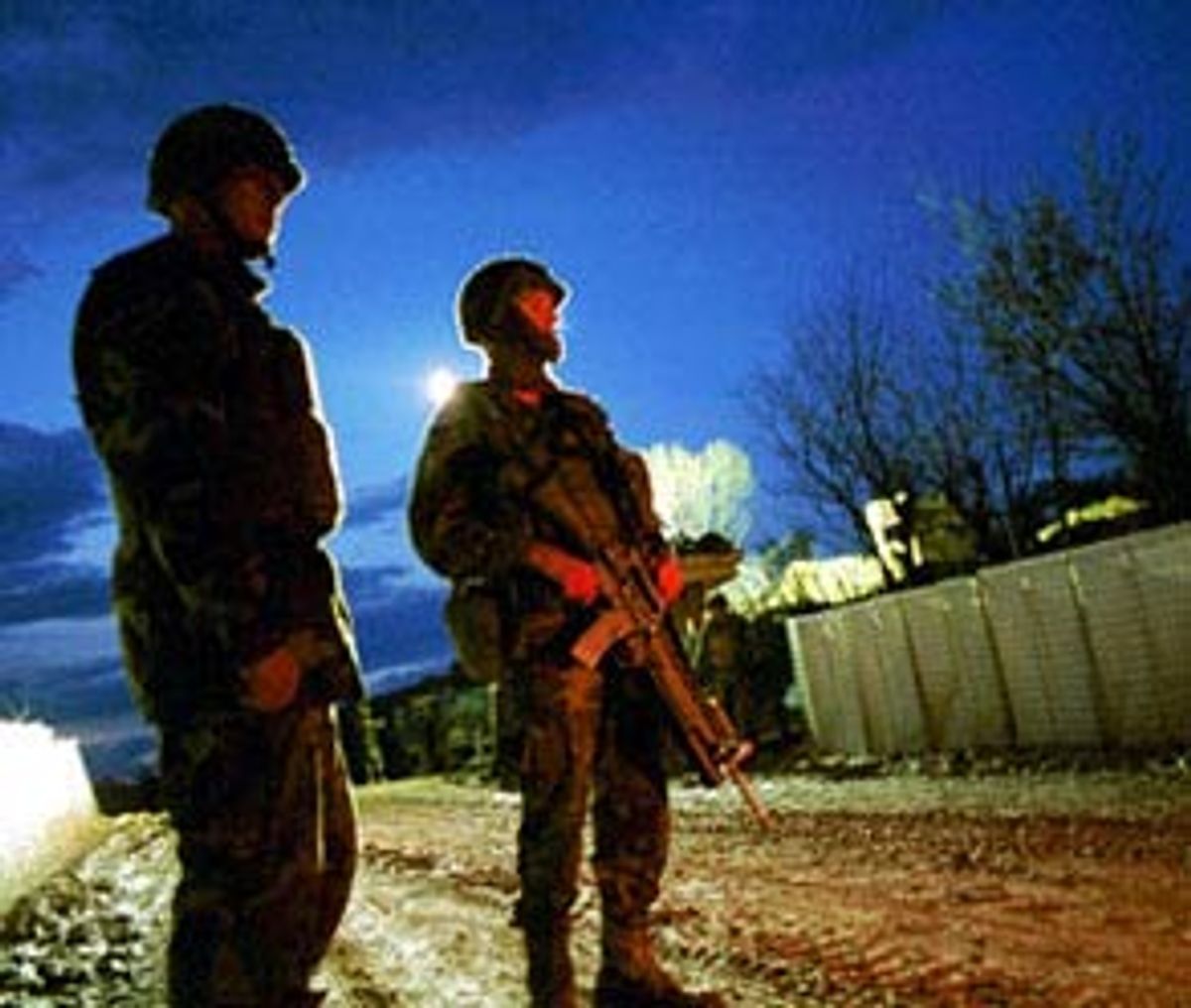 The situation on the border between Serbia and Kosovo is rapidly deteriorating into a full-fledged crisis -- for NATO peacekeepers, Serb politicians who face elections Saturday and ethnic Albanians, more than 5,000 of whom have fled in the past few weeks out of fear of an imminent Serb crackdown. The new Yugoslav authorities have threatened to send troops into Serbia's Presevo Valley, which borders Kosovo, if NATO peacekeepers can't quash rebel activity.

The growing guerrilla unrest alarms many because it was a similar situation in Kosovo between 1998 and 1999 -- when ethnic Albanian rebels routinely attacked Serb police patrols -- that triggered the massive Serbian military retaliation against Kosovo villages that were suspected of harboring rebels. Brutal Serbian military retaliation, including massacres of civilians, launched the mass exodus of close to a million ethnic Albanian refugees and, ultimately, the NATO bombing campaign.

The simmering crisis may also present the first major test of President-elect George W. Bush's foreign policy. Bush and the leaders of his foreign policy team have roundly criticized the deployment of American peacekeeping troops on post-conflict missions such as those in Bosnia and Kosovo as a drain on U.S. military readiness. Currently, some 6,000 troops are posted in Kosovo and another 4,250 in Bosnia.

Last weekend, gunmen near the village of Gornje Karacevo, a hamlet that lies close to the border between eastern Kosovo and southern Serbia, fired on American peacekeepers. The rebels were retaliating because the soldiers -- with the help of Russian peacekeepers -- had blown up a road connecting the region with Serbia. The route had been a popular one with smugglers and a band of Albanian rebels who are fighting to liberate three Albanian-inhabited towns that lie just on the other side of the Serbian border.

The towns are located within a three-mile-wide buffer zone that separates NATO-patrolled Kosovo from southern Serbia. Serbian forces are forbidden to enter the zone, according to the military agreement that brought an end to NATO's bombing campaign. Ironically, that presents a problem for the U.S. troops charged with establishing law and order in the area. It means they must act alone in sealing the border and halting the regular flow of rebels back and forth across it, bringing weapons, money and men from Kosovo.

An American working in eastern Kosovo confirmed Wednesday that the U.S. has sent in special forces to try to quash the rebel movement that is believed to have carried out hundreds of armed attacks in the past 10 months. More than 19 people have been killed and 42 wounded in the attacks -- mostly Serbian policemen.

"They've brought in special units -- Rangers, Delta Force, Navy SEALs. And some of them are operating inside the buffer zone," the source, who works in a support capacity with the peacekeeping mission, said Wednesday from Gnjilane, the headquarters of the U.S.-patrolled sector of eastern Kosovo. "They've kept it real quiet too."

In these final weeks of the Clinton administration, the peacekeeping troops have been taking forceful steps to stamp out the cross-border trafficking. Peacekeepers have sought to capture and interrogate the often-armed rebels and smugglers who sneak across the hilly goat paths at night. They've bombed the roads the guerillas use. They've seized weapons from them. They've tried to prevent the infiltration of Serbian forces in civilian guise and bring security to an area of heavy emotional interest to both Albanians and Serbs. It's exactly the kind of peacekeeping scenario that President-elect Bush criticized during his campaign -- and it's one that the Clinton administration is quietly trying to eliminate before the former Texas governor assumes the presidency in January. And coming 18 months after Slobodan Milosevic ordered Serbian troops out of Kosovo, it's the kind of work that Secretary of State-designate Colin Powell and incoming National Security Advisor Condoleezza Rice don't think American soldiers should be undertaking. After accepting his invitation to become Bush's secretary of state, Powell promised Saturday "to undertake a review" of U.S. participation in NATO peacekeeping missions in the Balkans "right after the president is inaugurated."

"Our armed forces are stretched rather thin and there is a limit to how many of these deployments we can sustain," Powell said.

"Carrying out civil administration and police functions is simply going to degrade the American capability to do the things America has to do," now-incoming National Security Advisor Condoleezza Rice told the New York Times in an Oct. 22 interview. "We don't need to have the 82nd Airborne escorting kids to kindergarten."

Rice offered more detailed reasons for the departure from peacekeeping missions: "The United States is the only power that can handle a showdown in the [Persian] Gulf, mount the kind of force that is needed to protect Saudi Arabia, and deter a crisis in the Taiwan Straits," she said. "Extended peacekeeping detracts from our readiness for these kinds of missions."

But many foreign policy experts disagree with the coming Bush administration's positions. Leading the dissent is retired Gen. Wesley Clark, who commanded the NATO intervention in Serbia last year. He says peacekeeping is neither as draining, nor dangerous, as opponents to it have made out.

"The safest place to be in the U.S. Army now is a peacekeeper in the Balkans," Clark said during a speech at the U.S. Institute of Peace in Washington last week. "There is something wrong in the perception that it is OK for teachers to get shot in U.S. classrooms, but that it will bring down the U.S. government if a peacekeeper gets hurt in the Balkans."

Clark notes that the 10,000 U.S. troops posted to Balkans peacekeeping duties are just a small fraction of the over 120,000 U.S. troops posted to Europe. The vast majority, some 100,000, are stationed in Germany, a deployment that is a relic of the Cold War era when the Western allies feared a Soviet bloc invasion -- a prospect now almost nobody considers likely. In fact, many who advocated U.S. intervention to halt mass killing in Bosnia and Kosovo question the logic of posting 100,000 troops to deter a war that almost no one considers likely, while balking over the deployment of 10,000 troops whose work can be shown to have saved lives and brought stability to people facing real-time slaughter.

In his memoir "My American Journey," Powell recalls how then-U.S. ambassador to the U.N. Madeleine Albright asked him during the Bosnian war, "What's the point of having this superb military that you're always talking about if we can't use it?"

"I thought I would have an aneurysm," Powell writes, describing his reaction. "American GIs were not toy soldiers to be moved around on some sort of global game board."

But those who served the Clinton administration in the darkest days of the Bosnian war say they are troubled by comments like these, suggesting that they reflect a lingering lack of consensus in the U.S. over its role in the world.

"We thought we could bridge the difference between those who want intervention and those who didn't," Clark said. "But we didn't bridge the gap. What we saw, in 1995, when the U.S. was considering NATO intervention in Bosnia, was a deepening of the partisan divide over the issue of the U.S. role in world affairs, in particular, in the Balkans."

"The question is," he added, "can we restore a strategic consensus in the U.S. on the role it should fulfill in the world? We can't unless we think clearly. The fact is, there is a limit to what other organizations can do."

While Bush foreign policy advisors have criticized U.S. participation in NATO-led, post-conflict peace building, they have been vague on whether or not they believe the U.S. should play a role in stopping genocide, any time anywhere. In other words, there's question whether President-elect Bush's Cabinet would support military intervention to halt the killing that NATO ultimately undertook in Bosnia in late 1995, and in Serbia last year, when public pressure forced Western leaders to take action to stop the massacres.

"What if our values are attacked in areas that are not arguably of strategic concern?" Rice pondered in an article in a Jan. 2000 Foreign Affairs magazine essay on a prospective Bush foreign policy. "Should the United States not try to save lives in the absence of an overriding strategic rationale? The next American president should be in a position to intervene when he believes, and can make the case, that the United States is duty-bound to do so."

But in elaborating when, exactly, a U.S. president might feel compelled to commit U.S. military force to prevent slaughter, Rice concludes, "A president entering these situations must ask whether decisive force is possible and is likely to be effective and must know how and when to get out. These are difficult criteria to meet, so U.S. intervention in these ... humanitarian crises should be, at best, exceedingly rare."

What is clear, however, is that the foreign policy team Bush has assembled reflects a worldview that doesn't believe stopping genocide is in and of itself in the U.S. national interest. Rice describes military intervention to halt mass killing more as an indulgence, an unsure thing, a wasteful use of resources, that the U.S. should probably resist. Bush has said flat out that Africa will not be a strategic priority for his administration.

Retired Gen. Clark used to feel that way, too. It's a view he shared with many in the Pentagon when he came to Washington in 1994. As a top Pentagon advisor then, Clark said he advised Clinton against an intervention to stop the genocide in Rwanda. Without U.S. or other support, U.N. peacekeepers withdrew. Without international protection, more than 800,000 innocent people were massacred. Clark said he feels complicit for his role in doing nothing to stop the killing, and that he hopes the experience will convince new foreign policy leaders that the U.S. has a unique role in the world, not just to make life more comfortable and secure for Americans and their allies, but to make the world a less horrific place to live.