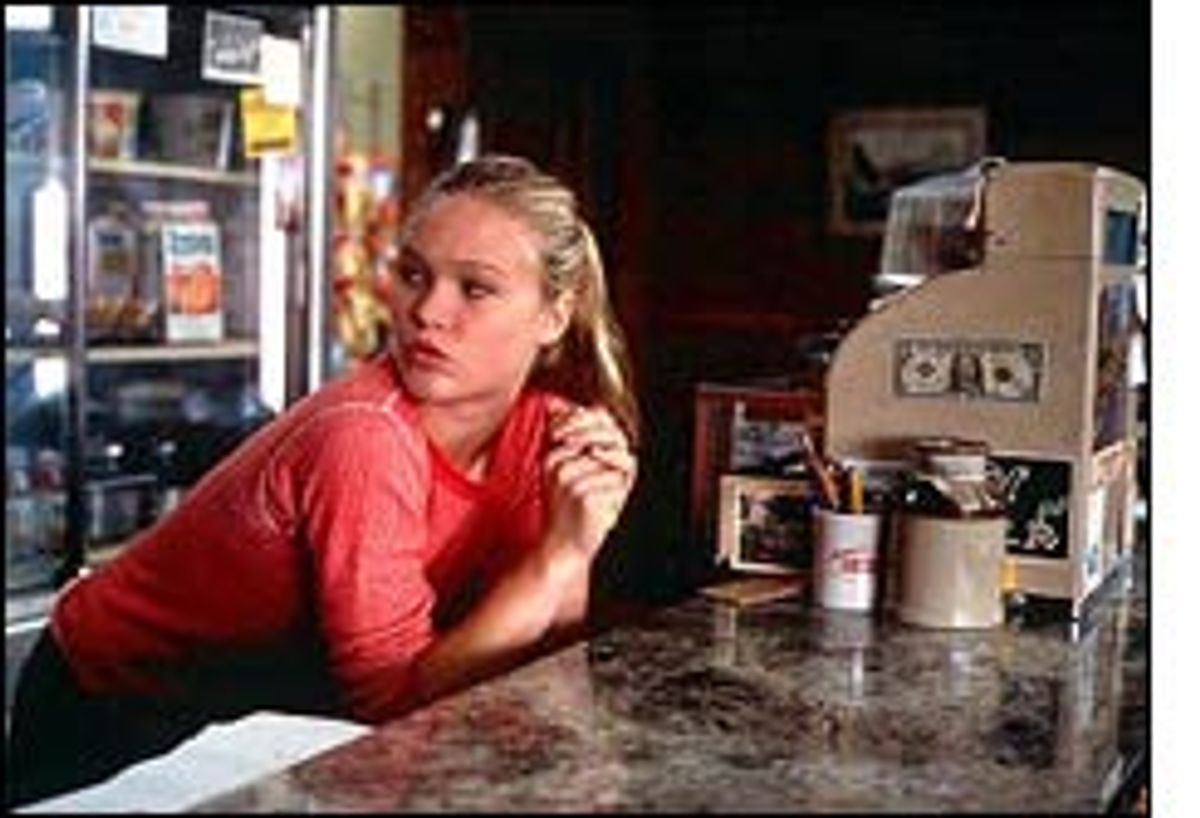 Actors love to speak David Mamet's dialogue because the guy is a whiz at actors' rhythms. The profanity-laden exchanges between his stunted and desperate characters build up a rumbling momentum, only to be interrupted by sudden pauses for them to mull over some carefully nursed grudge. The back-and-forth rhythms of Mamet's words carry the actors along. When he brought that talent to Chekhov in his adaptation of "Uncle Vanya" (used in Louis Malle and Andre Gregory's "Vanya on 42nd Street"), the result not only respected the source but lifted the play from the stilted quality that can mar translations (particularly period translations).

But in his original work, Mamet has never transcended his own puny worldview. His scripts read and play like an aestheticized version of some loudmouth holding forth in a bar, bellowing that it's all crap and that the bastards always win.

The bastards win in Mamet's new ensemble comedy "State and Main," but for once he treats their victory as a sly joke instead of an indictment of our moral malaise -- or whatever it is he's indicting. The first 40 minutes of the movie are all rhythm, the most sustained, and certainly the most enjoyable, demonstration of Mamet's talent for crisscrossing dialogue.

The story is about an under-the-gun Hollywood movie crew that gets kicked out of the New Hampshire town in which it was filming. The filmmakers hurriedly decamp to another town over the border, in Vermont. The casually frantic activity of the picture's opening minutes is worthy of classic screwball comedy. Crew members zip around one another and around starstruck townspeople as if they were missiles homing in on a target. The director, Walt Price (William H. Macy), holds two or even three conversations at once, shifting lickety-split from glad-handing insincerity to cranky exasperation. One minute he's buttering up the mayor (Charles Durning); the next he's telling his costume designer, "These look like Edith Head puked and the puke drew these sketches!"

Whenever the movie's screenwriter, Joe White (Philip Seymour Hoffman), a playwright working on his first movie, wanders into this buzzing hive he comes out looking like a cartoon character who gets spun around in a revolving door and emerges like a drunken man trying to find his footing. There's a teenage waitress (Julia Stiles) determined to appeal to the appetite of the leading man (Alec Baldwin) with BLTs and other things besides.

The female star (Sarah Jessica Parker), of whom one crew member says, "America can draw her tits from memory," suddenly balks at her nude scene -- unless she gets an extra 800 grand upfront. And the old mill that drew the crew to this town has, the filmmakers discover, burned down years ago. This is a problem, since the name of the movie they're shooting is "The Old Mill" and Joe has no idea how to begin the rewrites Walt is demanding.

The clash between Hollywood sharpies and wily small-towners is not perhaps the freshest idea for a comedy; behind-the-scenes comedies about moviemaking have started to feel less like satire and more like self-congratulation, a chance for moguls and egotistical stars to say, "Yep, we're pricks all right" and think that prickiness makes them what your grandmother called "a real character." When he's cooking, Mamet makes Hollywood vs. small town seem still fertile comic ground. The small-towners may be agog at the stars in their midst, but they're not rubes. (There's a neat, tossed-off gag in which two diner denizens trade their morning paper for Variety.)

In Mamet's hands, Yankee distrust becomes a wizened strain of comic cunning. When you laugh as freely as Mamet does at the townspeople's lack of sophistication and their wariness of the sophisticate swells in their midst, you have the opposite of snide laughter -- it's just honest amusement at people's quirks. It's a good joke that the town's mayor has the same name as the hero of "It's a Wonderful Life" -- George Bailey. Mamet is sending up Capra's phony idealization of small-town America, and doing it with the spirit of Preston Sturges.

Unfortunately, he can't sustain it. An accident at the intersection that gives the picture its name saddles the movie with an ethical predicament at the very moment when the farcical complications should begin escalating into madness. At the center of the predicament is Joe, whose new girlfriend, Annie Black (Rebecca Pidgeon), wants him to tell the truth even though the truth could end his screenwriting career.

The problem is that -- in this case -- telling the truth is exactly the wrong choice, a way for an ambitious small-town pol to further his career on trumped-up charges. Mamet has the good sense to let the characters who are less bothered by ethics carry the day, but he needs to satirize Joe's dilemma as well. It just feels unnaturally cozy when a movie this enamored of its hucksters refuses to make fun of a guy who has to grasp that sometimes justice demands lying.

At its best, "State and Main" is fast and sharp, but when a movie like this goes off the rails, it's more disappointing than when a bad movie does. Mamet gets about halfway to great screwball comedy before the picture runs out of steam. What keeps you watching then is the nifty ensemble work. In Mamet's past movies, I've never been sure how to take Pidgeon (Mrs. Mamet); her mixture of aggressive, possibly deranged brightness and flat affectlessness, of superiority and self-deprecation, was like a radio signal fading in and out, too distant and quavery to get a fix on.

As Annie, the town's bookstore owner and queen of its amateur theatricals, Pidgeon is just as odd, but in the great tradition of American comic eccentrics. Pidgeon's internal clock must run about a minute-and-a-half faster than everyone else's. She has the alertness of someone who's always a couple of beats ahead and doesn't sense that anyone else is having trouble keeping up with her. If you can imagine a confident, assured, brainy version of Carole Lombard's dizzy breathlessness (in L.L. Bean instead of "gowns by Adrian"), you might get an inkling of what Pidgeon does here. For Joe, Annie is like one of those on-board computers that come in luxury cars in case you get lost. She's the little voice in his head, steering him through rewrites and the minefields of movie production. Hoffman, who continues to amaze through his sheer range, is as endearingly bewildered here as he was endearingly bearish playing Lester Bangs in "Almost Famous."

Macy turns his nice-guy quality inside out as the director hiding his manipulativeness inside supplication. He's got a story to calm down his skittish actors in every crisis and his smooth, practiced tone lets you know that each one is total bullshit. Parker navigates the hypocrisy of prudish exhibitionism with amusing deftness. The confrontation between her and David Paymer, as the Jewish movie mogul from hell, is a minicollision of phony dignity and undisguised vulgarity.

Paymer is like Sammy Glick come back as part Terminator, part Johnnie Cochran. He's got all the juice he's ever going to need to snap his fingers and make people disappear. And though he doesn't have nearly enough to do, Baldwin -- after "Outside Providence" -- has lucked into another role worthy of his lunatic comic talents. Watching Baldwin on "SNL" I have laughed myself into stomachaches. I could never figure out how an actor could be so brilliant there and so stiff on-screen.

The answer, I think, is that he's not a leading man but a comic actor with a leading man's good looks (and, if you look at the scenes in "Outside Providence" where he mourns his wife's suicide, an actor's capacity for grief). With his Pepsodent smile and perfect black pompadour, no one in the movies can be more fatuously funny than Baldwin. When he's approached for an autograph by a freckle-faced kid who looks as if he was cryogenically frozen at MGM central casting in 1945, and the kid tells him his hobby is baseball, Baldwin's smile freezes while he searches for a response and comes up with, "Well, that's our national pastime!"

The pleasure of watching Baldwin here is much the same as the pleasure of watching Mamet's work. Cutting up, forgoing intensity for slyness, they're both working closer to their true talents. For all its faults, "State and Main" isn't straining to be outrageous, and for all the meanness of its characters, the movie itself is never mean. I'd love to see Mamet try another comedy and build on what he does here. He might just have the sort of cheerful cynicism to give American comedies the kick in the ass they've been bending over and begging for.