"All the Pretty Horses"

Billy Bob Thornton returns with a much-too-faithful take on one of the more successful literary snow jobs of our time. 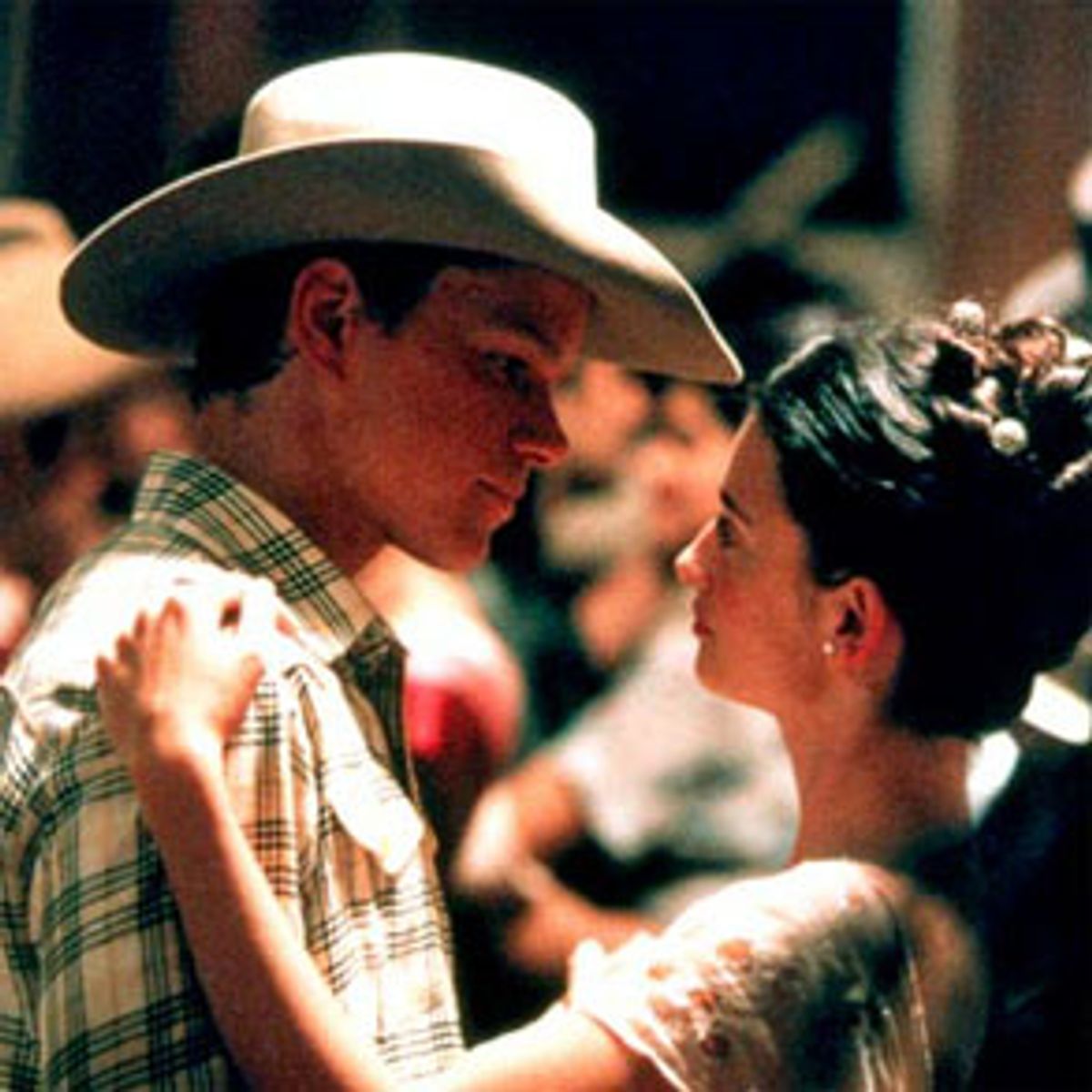 The praises and prizes awarded Cormac McCarthy's novel "All the Pretty Horses" represent the fruit of one of the more successful literary snow jobs of our time. Why were people snookered by that book?

I think the answer lies in McCarthy's descriptions of the vast Texan and Mexican landscapes. From pulps, movies and TV westerns we share a heavily romanticized image of these vistas; with conversational and metaphysical pauses big enough to drive cattle through, McCarthy's spare, portentous prose does such a thorough job of aestheticizing these received images (but ruggedly, ruggedly -- no arty pansy airs for Cormac) that readers can fool themselves into believing they've been put in touch with our mythic past. McCarthy is better on width than on depth. His physical settings are spacious, but his characters are cutouts and his story an inch deep.

John Grady Cole (Matt Damon) is a young cowboy who makes his way to Mexico after the family ranch is sold out from under him by his scheming mother. (She's a city slicker and we all know that type has no connection to the land.) Along the way he and his buddy Lacey (Henry Thomas) meet and ride for a while with an unbalanced young hotshot (Lucas Black) whose temper will spell trouble down the road. When Grady and Lacey get work at the ranch of a powerful landowner (Ruben Blades), Grady falls for the boss's daughter (Penélope Cruz) despite the warnings that he is destroying her honor.

Maybe the mantle that McCarthy has assumed as the Flinty Loner of American Literature makes it easier for people to swallow his taciturn, macho hokum. In "All the Pretty Horses" a man's worth is determined by his ability to withstand physical punishment -- laid on the hero, once he ends up in a Mexican prison, like the Stations of the Cross. And a man's dedication to honor and honesty is valued chiefly for its ability to make his life a misery and thus give him an opportunity to suffer in stoic silence. This morally superior masochism reads like pulp for the "New York Review of Books" crowd -- that is, people who'd be too embarrassed to read Zane Grey or rent a John Wayne movie.

At just under two hours, Billy Bob Thornton's film of "All the Pretty Horses" is less than half of the original four-hour cut he delivered. (I've heard unconfirmed reports from several sources that Thornton has given this cut his approval.) You can sense things are missing. Some events happen not just unexpectedly but almost inexplicably. Glances and landscapes and spare conversations are lingered over, but a crucial event like the love story at the center of the film is not much more than an extended montage. And the hero's Mexican prison ordeal ends so abruptly that if you were seeing the movie on tape you'd be tempted to rewind to make sure you didn't miss anything.

The omissions and inconsistencies of this cut may work against Thornton's intentions and McCarthy's claims to grandeur -- they make the story less a Greek tragedy than the horse opera it is -- but they're a blessing for the audience.

At under two hours, the movie crawls by; at four, people would become fossilized to their seats. Thornton and screenwriter Ted Tally have obviously savored every gust of wind blowing through the canyons and the plains of McCarthy's novel without noticing the more, shall we say, pungent aroma emanating from his prose.

The dialogue is hilariously laconic -- "I cain't do it." "Well, if you cain't, you cain't" -- when it isn't dotted with little existential tumbleweeds a-tumblin' through: "You think you can believe there's a heaven if you don't believe in hell?" Or: "In the end, Mr. Cole, we all get cured of our sentiments. Those whom life doesn't cure, death will." Or (my favorite, from the Mexican jefe jailer): "Some crazee peeple can say dat God ees here. But God ees not here."

You got that right. The weight of myth sits on nearly every frame of the movie like a 400-pound gorilla. I'm sure if somebody hadn't stepped in, I'd be sitting in that screening room until after Christmas, looking at close-ups of crumpled packets of Pall Malls, and grime-encrusted hands, and broken-in working clothes, and worn-down Western diners, and tin plates of beans and cornbread -- get the idea? Thornton and screenwriter Tally OD on texture. Just about the only authentic element is Marty Stuart's simple, elegaic score, mostly guitar, mandolins, viola and accordions.

In fact, one of the reasons things seem to happen so fast -- that is, when something happens -- is the deliberate deadness of what surrounds it. Some of what Thornton does is just fine, like the freeze frame he uses on the face of someone about to be executed. (Whether because this version has been cut or because of his own propensity for suggestion, Thornton's handling of the violence is much more effective than the way the book wallows in it.) But for the most part Thornton approaches the movie as if he were Wayne and Garth invited to play with Aerosmith -- he's too busy dropping to his knees and announcing "I'm not worthy!" to find the beat.

Nothing has made me realize how long I've been going to the movies than seeing Bruce Dern, once every director's favorite psycho, in the role of a sage elder judge. Like Dern, most of the actors are presented as icons. Cruz's Alejandra stands for carnal purity, Blades' patron for power and privilege and Maria Colon's matriarch for the scheming power left women in a world ruled by men.

The only lifts in the acting come from Lucas Black as the young troublemaker Blevins and Henry Thomas as Cole's sidekick Lacey. Without any fuss, Black creates a character whom it's impossible to resolve your feelings about -- a naive tantrumy kid, already infected with a killer's remorselessness and unable to see that he provokes the violence that accompanies him. And Thomas, a fine actor, brings some humor and spark to the role of Lacey. Thomas' emotions manage to work their way past the character's laconic demeanor, if only just in the worried set of his jaw or the question mark in his dark eyes. Thomas gets past the limitations of McCarthy's macho fantasy world to create a living, breathing human being.

Damon doesn't, though there's nothing technically wrong with his performance. He's more than suited to playing an upright kid dedicated to decency, honesty and hard work. The trouble is that those kinds of roles are usually unbearably dull. They're the very sort of parts that, in just a few years, turned Gary Cooper from a sexy young star to a dependable, "aw shucks," stick-in-the-mud leading man. The same thing could happen to Damon if he's not careful.

The sincerity of his acting is never in doubt here -- the all-American straitjacket that sincerity is binding him in is all too clear. A comedy might allow him to relax and fool around. He has become so willing to lend himself out as the clean, upstanding American in movies like this one and "Saving Private Ryan" that he barely seems to exist in the present anymore. His performance in "The Talented Mr. Ripley" was unconvincing because while he has sharpness and even cruelty in him, he doesn't suggest the hidden recesses of psychosis that the role requires.

The immediacy Damon had in "Good Will Hunting," "Courage Under Fire" and "Geronimo" (an upright-young-man role that played as a person, not a conceit) and in his scenes in "Dogma" feels as if it's receding before our eyes. The horrible thing about that is that recessiveness is exactly right for this inflated western pulp. From what remains and the seriousness accorded every pause and scowl, I can only guess that Thornton's four-hour version was an attempt to be worthy of the vision of McCarthy. The worst thing you can say about "All the Pretty Horses" is that, even at two hours, Thornton succeeds.