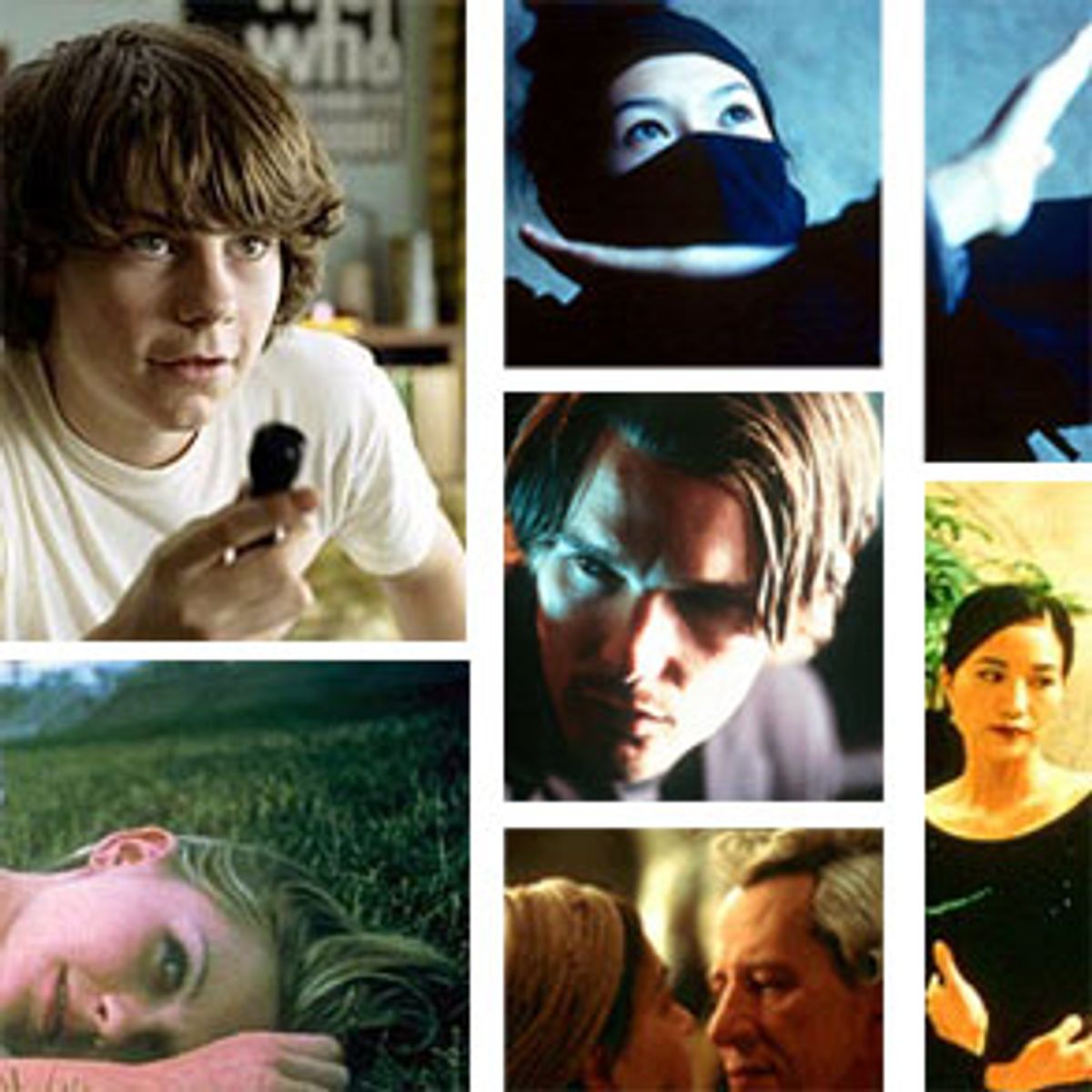 1) "Almost Famous" The movie marquee in the first scene gives it away. This autobiographical coming-of-age story is Cameron Crowe's "Stolen Kisses" and it's better than Truffaut's. "Almost Famous" isn't a down-and-dirty view of rock 'n' roll life on the road; the movie itself acknowledges that when Kate Hudson's groupie, Penny Lane, tells the hero (Patrick Fugit), "You're too sweet for rock 'n' roll." And sure, Crowe makes himself the hero. The flip side is that, even at their worst, he refuses to judge any of the characters harshly. "Almost Famous" gets the communal joy of rock 'n' roll better than any movie since "A Hard Day's Night." When, gathered on their tour bus, the band and their followers sing along with Elton John's "Tiny Dancer," it's as spontaneous an expression of solidarity as the bus passengers in "It Happened One Night" singing "The Man in the Flying Trapeze."

2) "Mission to Mars" Recipient of the year's most disgraceful reviews, Brian De Palma's tender, poetic and intimate science-fiction adventure refines and extends themes that have obsessed him for years and poses a question crucial to any commercial filmmaker in the age when computer-graphics technology threatens to reduce movies to spectacle: How do we avail ourselves of technology without sacrificing our humanity? The humanity here was in the flawless performances by Gary Sinise, Tim Robbins, Don Cheadle and Connie Nielsen (equally terrific in "Gladiator"), and in the spacewalk that makes up the movie's excruciating centerpiece. The scene reverses De Palma's great theme of thwarted chivalry to come up with one of the most moving demonstrations of the bonds of marriage ever put on film. Can American film critics still see what's in front of their nose? The reviews for "Mission to Mars" suggest they're paying more attention to the studios' publicity departments.

3) "Hamlet" Michael Almereyda's free adaptation of Shakespeare is not just equal to its source but confirms the director as contemporary cinema's great poet of urban loneliness, alive to the beauty and coldness of modern cities. In a year of spectacular special effects ("Mission to Mars" and "X-Men") none may provoke as much wonder as the sight of the dead king's ghost disappearing into a Pepsi machine, or as much longing as Hamlet (Ethan Hawke) gazing at the pixel vision images of his Ophelia (Julia Stiles).

4) "Quills" Giving comfort to neither the people who'd ban art nor the defenders who insist, "Art can't hurt you" (as some of Robert Mapplethorpe's supporters did a few years back), Philip Kaufman's nuanced and damnably smart Grand Guignol entertainment about the last days of the Marquis de Sade (Geoffrey Rush) is an argument for the danger that's always inherent in art: the possibility of giving rise to madness. Brazen and witty, Kaufman invites us to flatter ourselves as sophisticates able to chuckle at Sade's tales of depravity. And then he opens up the abyss, leaving us beyond laughter, deep in a world of horror. Great performances from Rush, Michael Caine, Joaquin Phoenix and Kate Winslet.

5) "Yi Yi" When you're thirsty nothing tastes as good as cool, clear water. Edward Yang's three-hour film about several months in the lives of a Taiwanese family is that pure and refreshing. Encompassing life's primal passages, the movie never feels ponderous. Yang fully acknowledges the compromises life entails, but in the end, the movie is a gift that allows us to savor the texture and weight of the moments that slide by us hour after hour, day after day.

6) "The Virgin Suicides" Lyricism is the last thing you expect of a black comedy. But Sofia Coppola's adaptation of the Jeffrey Eugenides novel is a loving ode to the way teenage boys mythologize young women, and an elegy to an era recently past without reverting to the camp that has characterized other takes on the decade. There's love in the way Coppola and cinematographer Ed Lachman view the artifacts of teenage life -- bad prom gowns, the childish and womanly accouterments of a girl's bedroom and the pop songs that make the characters feel as if their souls are contained in the groove of each record. As the teenage lovers, Kirsten Dunst and Josh Hartnett are the king and queen of everyone's fantasy prom.

7) "Girl on the Bridge" Anyone wondering where the reckless "taking a chance on love" spirit of American romantic comedies has gone couldn't do better than to look at Patrice Leconte's romantic daydream of a movie. Daniel Auteuil is the down-on-his-luck knife thrower who saves a beautiful young girl (the charming Vanessa Paradis) from suicide and makes her the assistant in his act. The movie both believes in and kids the idea that there's a soul mate out there for each of us. Flitting from city to city, the movie captures the globe-hopping spirit of '30s movies, as if Leconte had set out to pay homage to the doomed romantic fatalism of '30s French melodramas and veered off into the era's American screwball comedies.

8) "Beau Travail" Claire Denis' riff on "Billy Budd" transplants Melville's sea saga to the French Foreign Legion and the desert of Djibouti. Placing her faith in the ability of observation to reveal, Denis and her brilliant cinematographer, Anges Godard, allow the film's meanings to reveal themselves in the deliberate, hypnotic pace of the Legionnaires yielding to the rigid discipline and unvarying routine of life under the African sun. As Galoup, the film's version of Melville's master sergeant, Denis Lavant lets loose all of the film's repression in the astonishing final scene, summing up the movie and blasting it to pieces at the same time. I've seen this film four times in the course of the past year, and Lavant's final moments still leave me unable to believe what I'm seeing.

9) "X-Men" Brian Singer's film of the Marvel comic doesn't reach the Wagnerian heights of Tim Burton's "Batman," but it's a great comic-book movie with a grandeur of its own. Depicting the adolescent outsider's desire for acceptance and revenge in the story of a battle between good mutants and evil mutants, the movie is less resonant in the plot involving a bigoted politician than when we get to see the good mutants putting their special powers to work. The best scenes feature the terrifically charismatic Hugh Jackman as Wolverine and Anna Paquin as Rogue, a girl who is so empathetic that merely touching another human being causes her to drain their life force. Paquin gives the freakiest and most convincing portrayal of the heightened sensitivity of adolescence since Sissy Spacek in "Carrie" and Amy Irving in "The Fury."

10) "O Brother, Where Art Thou?" Treating the Depression as if it were a tall tale handed down through the generations, the Coen brothers have made their first movie with heart and beauty. Images drawn from the photography of Walker Evans and Dorothea Lange are side by side with images drawn from American kitsch and movies. Tommy-gun-wielding bank robbers taunt, "Come and get me, coppers!" Klansmen whirl around a prospective victim as if choreographed by Busby Berkeley. As the three chain-gang fugitives who are the rube heroes, George Clooney (in a slick parody of Clark Gable), John Turturro and hilarious, long-faced Tim Blake Nelson are perfectly in tune with the Coens' Rube Goldberg universe. If you can imagine an American comic strip with something like the perseverance and fatalism of bluegrass and spirituals, this is it.

Honorable mentions: If it had been released, Paul Schrader's lush noir romance "Forever Mine" would be near the top of my list. And no list of the movies that have given me the most pleasure this year would be complete without "Erin Brockovich," "Set Me Free," "Cast Away," "Two Family House," "East-West," "Gun Shy," "Jesus' Son," "Judy Berlin," "The Original Kings of Comedy" and Gillian Anderson's staggering performance in "The House of Mirth," the best any actor has given this year.