I wanted to be a mother who bakes

And then I found out that it's illegal. 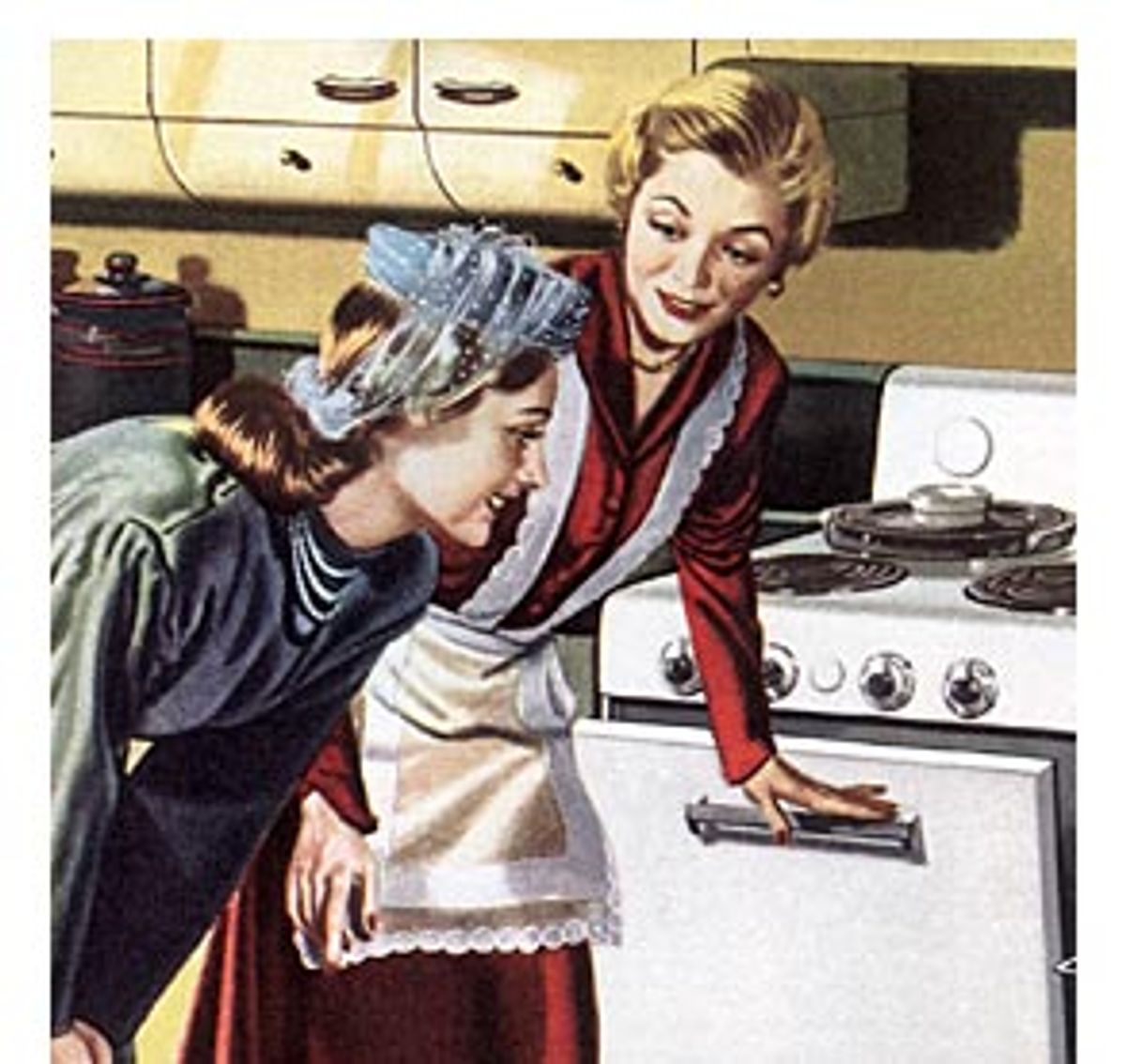 At first I thought she was just lazy.

Carol would rush into the office after dropping off cookies from the Safeway deli at her son's school. Or she would bring in lemon bars from a local bakery -- leftovers from last night's parent-teacher conference. I would give her a supercilious glance, pretending to understand how running errands and tending to her career could keep her from finding the time to whip up fresh-baked treats for school functions. But I wondered how a woman who seemed to otherwise have no aversion to cooking could skimp on the all-important school treats. Was she really so busy that she couldn't even pull out a box of cake mix?

Not me, I vowed. When I'm a mother, my children will go to school armed with carefully decorated cupcakes, cookies studded with chocolate chips and warm, lightly sugared gingerbread -- no box mixes, thank you very much. I'll stay up late icing butter cookies and get up early to drop them off in carefully packed tins. My love of cooking -- and my love for my future children -- would guarantee that no obstacle would keep me from mixing, baking and frosting a delectable assortment of goodies.

I thought back to the treats of my own school days: the bags of suckers, the boxes of Entenmann's, the cupcakes that came in a grocery store box with cellophane stretched clear and smooth across the top. My single mother's idea of preparing for the third grade Halloween party, or the student council meeting, or even my very own birthday party meant swinging by the Hy-Vee before dropping me off at school. With the purchased treats balanced precariously on my outstretched arms like an offering to the bake-sale gods, I would admire the other students' contributions: Alice's peanut butter cookies imprinted with fork tines, Tiffany's butter brickle wrapped in parchment paper and tied with different colored ribbons, James' still-warm snickerdoodles.

In the elementary school hierarchy, sweets were the edible symbols of our home lives. Lots of my friends had working mothers, but my mom worked two jobs. For her, getting dinner on the table was more important than putting sugar and starch in my classmates' tummies. Yes, I knew that my mom loved me. I just wished she could express that love in homemade cupcakes that all my classmates could share.

Don't get me wrong: I wasn't ostracized for bringing in a bag of Keebler this or that, and I'm not still suffering because of what my mom did or didn't bake when I was in the fourth grade. Probably no one else even noticed who brought what -- although we did live in small-town Iowa, where reputations were established on pie crusts. And yet I know that my kitchen dreams for my future children stem from those early morning trips to the grocery store, when my mom would grab a plastic box of cookies before pressing hard on the gas pedal, anxious to make it to work on time.

If how we parent is a reflection of our own upbringing, then I wanted to be what my mother could not be: a devoted baker of school treats, a tireless maker of crafts. Some people compare their incomes or cars or homes with the ones their parents had: I was going to compare my cupcakes. Shallow? Maybe. But delicious all the same.

I wondered if Carol's son might feel the same way someday. I convinced myself that surely he was mortified every time he had to show up at a school function with a brightly colored box filled with desserts made with hydrogenated vegetable oil.

But I was wrong, as I learned one day while on a business trip with Carol, when she made an offhand remark about treats. "The bakery makes deliveries to the school now," she sighed, "which is nice since everything has to be sealed when it's dropped off."

I asked her to explain. "Well, you just can't take a plate of cookies. Everything has to be store-bought." She sipped her coffee and nibbled at a Starbucks scone. Noticing my crinkled brow, she explained the rules of her school district: No treat can be distributed to children on school grounds unless it's sealed in packaging from a grocery store or retail bakery.

I quizzed her, incredulous that any parent would accept this damning of home-baked goods: "Was there some sort of hepatitis outbreak or something?"

"Hmm, I don't know. It's just been the rule since David's been in school." She contemplated a piece of scone before popping it into her mouth. I stared at her blankly, feeling vaguely guilty for having doubted her mothering skills.

When I looked into it, I found out that love wasn't the magic ingredient school officials feared, but a repeat of a major hepatitis outbreak that had swept Oregon public schools several years back. And these draconian regulations weren't limited to Carol's upscale suburban district, but were followed by nearly every school in northwestern Oregon.

The goal, according to the state health department, is to ensure that all foods designated for mass consumption are "non-readily perishable" and "from a proven source." The strictest districts even require that all treats arrive at the school "individually wrapped" -- not exactly a recipe to inspire legions of gourmet cooks.

Carol's son and all the sons and daughters of Oregon are missing what I missed during my own childhood: the experience of staying up late with their parents, licking frosting from a spoon while sprinkling the tops of cupcakes with bright and glittery sprinkles, knowing that their treats will be far superior to the box of Twinkies two tables down.

I suppose an outbreak of hepatitis or E. coli might dampen the warmth of that domestic scene. And maybe mothers across the state of Oregon heaved a collective sigh of relief when the policy was enforced by their school district, seeing it as one less thing to do -- though Carol is proof that abolishing homemade treats doesn't mean that parents are relieved of treat duty. But I've had to revise my fantasy of demonstrating my maternal love by showering my children's classmates with snickerdoodles and butter brickle. Somehow, making a call to the local bakery to have a dozen cookies delivered at 3 to Roosevelt Elementary wasn't quite what I had in mind.

Rachel Wray is a freelance writer. She lives in Portland, Oregon.