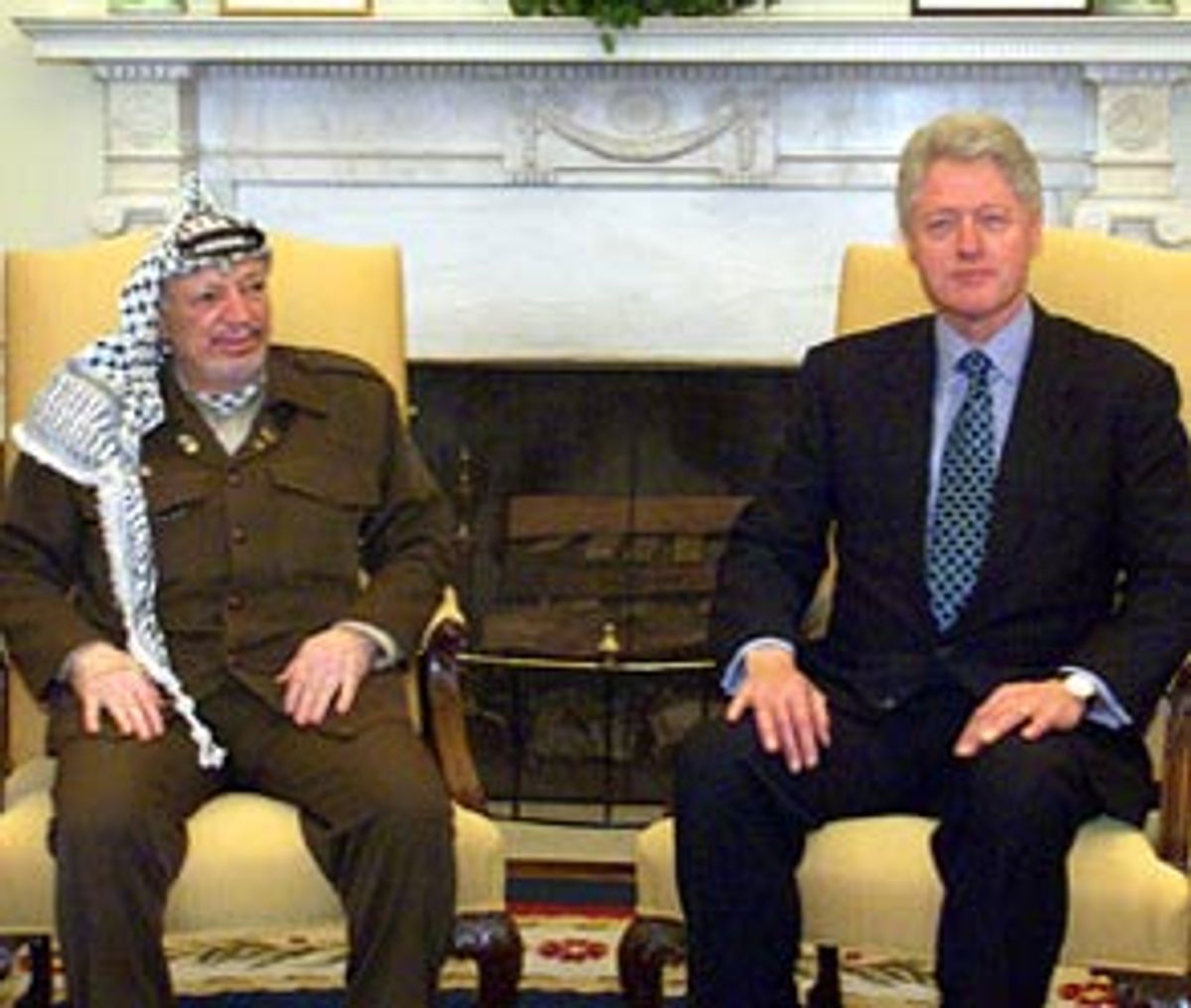 In an 11th-hour attempt to restore peace to the Middle East before President Clinton leaves office, Palestinian leader Yasser Arafat flew Tuesday to Washington to clarify with Clinton the details of an American proposal outlined by the president 10 days ago.

After two hours of negotiations that focused on reducing terrorism and violence in the region, the leaders took a break and scheduled further talks for late Tuesday night. As of Tuesday evening, it was too early to say how talks were progressing.

More than 350 people have died in three months of chaos in Israel and the Palestinian territories -- some shot for throwing stones, some for driving with the wrong license places, others still blown up in car bombs, hit by helicopter rockets or killed by sniper fire in their homes.

The imminent departure of Clinton, the chief wonder-worker of the faltering Mideast peace process, adds a note of urgency to the task of ending the bloodshed between Israelis and Palestinians. But peace agreements rarely cooperate with deadlines, and Clinton's exit from office on Jan. 20 may pass without any progress in negotiations.

While Clinton's Middle East team battles to preserve its legacy and save some of the historical breakthroughs accomplished since Arafat and Israeli leader Yitzhak Rabin first shook hands on the lawn of the Rose Garden in 1993, both the Israeli and Palestinian public seem to have given up on repairing the mess just now.

Indeed, Clinton's far-reaching proposal repeats most of the solutions that were raised and rejected by the two parties at Camp David this summer. If anything, Clinton's latest proposal is seen as even less likely to succeed.

"Theoretically this deal would be very hard to swallow under the best of circumstances," said Yossi Klein-Halevi, an Israeli journalist based in Jerusalem. "Now, under the worst circumstances, it amounts to willfully agreeing to the destruction of Jerusalem. For the Palestinians and Israel to jointly govern Jerusalem in the middle of a war is ludicrous."

According to Israeli minutes made public on Sunday in the Israeli press, the American proposal aims to end grievances on both sides by requiring that the Israelis hand over to the Palestinians Gaza and about 95 percent of the West Bank, seized from Jordan in 1967. It would also put Palestinians in control of Arab neighborhoods in East Jerusalem including the Islamic shrines on the esplanade known by Muslims as the Noble Sanctuary and by Jews as the Temple Mount. In return, Palestinians would accept the Israeli annexation of major Jewish settlements and forego the collective right of approximately 3.5 million Palestinian refugees to return to the lands they were forced to abandon in Israel's 1948 War of Independence.

"The question is whether Arafat can sell this to his public," said Edward Abington, a former U.S. consul general in Jerusalem, now a Washington-based political consultant to the Palestinian Authority, in a phone interview Tuesday. "And the same is true with regard to the Israelis."

The details of Clinton's proposal, which would work as a framework for a final peace plan if both sides accept it this week, smack of treason in the eyes of both Palestinians and Israelis.

Waiving the right of return is thought to be the most unpalatable part of the American proposal in the eyes of the Palestinians, and it is one of the issues Arafat intends to air in his meetings with Clinton in Washington this week. Most Palestinians acknowledge in private that the idea of returning millions of refugees currently scattered in camps in Jordan, Lebanon and Syria and in cities around the world to their original homes and olive trees in Israel is unrealistic. But it has become increasingly difficult to say that publicly. Over the past two years, there has been a hardening of the Palestinian position on the issue of refugees as mid-level politicians have made a career of defending the sacrosanct right of return, enshrined in U.N. resolutions. The fighting, fueled in part by the despair of long-suffering refugees, and the Palestinian lives lost over the past three months have made the issue even hotter to handle.

On the Israeli side, the most painful concession would revolve around the Temple Mount, the white-stoned esplanade at the heart of old Jerusalem. The idea of granting Palestinians legal sovereignty over the Temple Mount, an area occupied for centuries by important mosques but also the site of the destroyed Second Temple, the most holy spot in Judaism, has always been unthinkable to some Israelis. And after three months of fiery violence -- in which a Jewish shrine, Joseph's Tomb, was burned and desecrated by Palestinians after it was evacuated by Israeli troops -- many Israelis have rallied to the right-wing view that the Temple Mount must remain Jewish rather than end up in the hands of Palestinian vandals.

"A majority of Israelis are ready to share the Temple Mount or internationalize the area," said Klein-Halevi. "But the notion of handing it over to Arafat after three months of violence, as a reward, is appalling. I will not give in to Holy War."

Even dovish members of Israeli Prime Minister Ehud Barak's cabinet have voiced their refusal to cede sovereignty over the Mount. After emitting a qualified "yes" to Clinton's proposal last week and being tarred as a "traitor" by right-wingers, Barak eventually back-tracked on this very issue. But other storms are brewing.

Settlers have warned of "civil war" should Clinton's idea of evacuating 20 percent of Israeli settlements (where approximately 40,000 Jewish settlers live) ever be implemented -- and vigilante actions against Palestinians by settlers in the recent past show that they certainly have the ability to inflict harm.

Analysts argue that the mood on both sides is too ugly for any diplomatic agreement to hold. Feelings on the Palestinian side, where victims of the current clashes are hailed as "martyrs" whose blood must be avenged, are mirrored on the Israeli side by calls for harsher retaliation rather than negotiations.

On Sunday, the thirst for revenge was strikingly palpable on the streets of Jerusalem when a group of right-wing Jews went on an anti-Arab rampage, looking for Arabs even in the aisles of a supermarket just blocks from the U.S. Consulate in the heart of a normally peaceful neighborhood. The mini-pogrom was prompted by the murder of Binyamin Kahane and his wife by Palestinian gunmen, as the couple and their children were driving through the West Bank. (Kahane was the son of the late Rabbi Meir Kahane, a right-wing ideologue who advocated the expulsion of Arabs from Israel.)

Bellicose feelings on both sides are not the only clouds likely to rain on Clinton's last-minute peace parade. Israel's attorney general ruled a few days ago that Barak, the caretaker of a minority government without the backing of parliament, does not have the mandate to sign agreements involving the existential fate of the state of Israel.

In addition, Barak faces a tough battle for re-election in special elections on February 6. Until recently, conventional wisdom held that Barak would be able to save his leadership provided he transform these early elections into a referendum on peace. But polls on Friday show Barak trailing far behind Ariel Sharon, his opponent on the right, even in the event Barak accepts Clinton's proposal and talks move forward.

On the face of it, Clinton's mandate, just weeks before he is scheduled to leave office, also appears rather shaky. But President-elect George Bush has indicated that he would be happy to see Clinton succeed in his last-ditch efforts and would follow through on implementing Clinton's hypothetical Mideast deal.

"Historically there has been a lot of continuity in U.S. policy towards the peace process," noted Abington, the former consul-general. "But Palestinians know that it will not necessarily be a top priority of the Bush administration."

Given that, the question of timetable is one of the key issues Arafat is eager to discuss in his meetings with Clinton in Washington, according to Abington. Palestinians are reluctant to launch a new open-ended negotiation process that could drag on as long as the 7-year-old Oslo peace process. They are also wary of signing an agreement with one leader, Barak, only to have Sharon, his likely successor in February, break earlier promises and renegotiate.