According to sex surveys, I'm a tarnished woman. 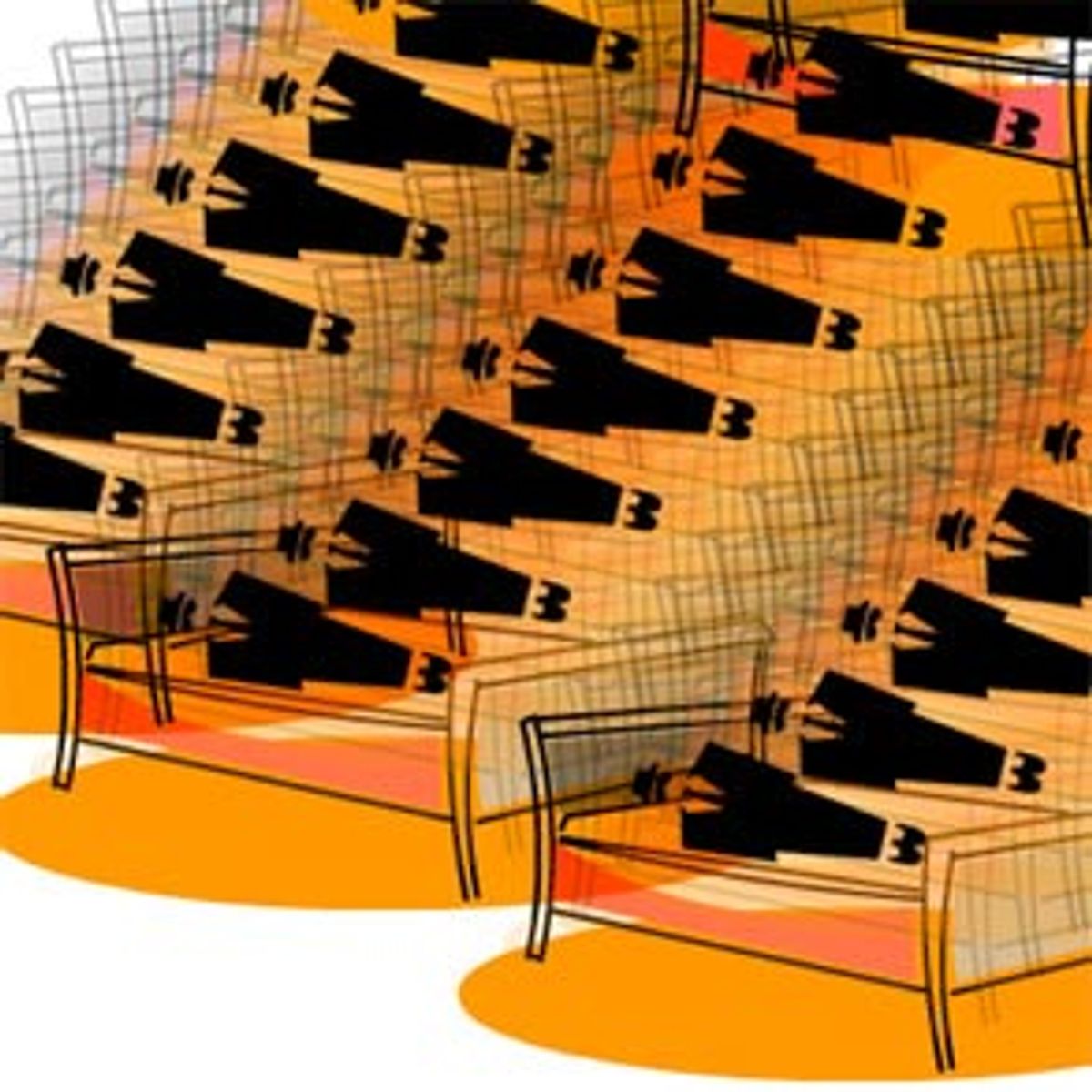 I cherish my time at the hair salon, when I get to wade through a juicy stack of women's glossies and wallow in such breathy fare as "Discover the Red That's Right for YOU" and "Dress to Reflect Your Inner Bohemian." At my latest snip session, however, I was stung by a couple of editorial land mines that caused me to stop short and recall my romantic past with the clarity of a drowning woman.

The editors of one rag were thrilled to reveal -- with giddy fanfare -- the results of a groundbreaking sex survey. Yes! This promised both titillation and the lure of finding my place on the normal-to-loopy continuum. The questionnaire was largely devoted to various acts -- including those you enjoy and those you'd do only at gunpoint -- and how many people in your life you've committed them with.

About halfway through, my botoxed brow tried to furrow.

I was only slightly ruffled to discover that experiences I considered well within the realm of pleasurable were described by many of my sisters as ranging from "annoying" to downright "repulsive." But what really rattled me was the section where they crunched numbers. Somehow, my body count was way off the charts as compared with those of my more discerning sisters. If they were normal, then I could be described optimistically as a free spirit, less politely as a loose woman -- and, well, I think we all know the word commonly used in less delicate circles.

You see, the vast majority of women who responded -- women mostly in their 20s, 30s and 40s -- said they had been with a grand total of two to six men.

As I quickly took stock of my post-adolescent love life (with time off for a couple of marriages), I could not make these numbers square with one's freshman year at college, let alone an entire romantic history. Even allowing for scarier STDs and some level of personal mythologizing, this was news. Statistically speaking, the shopworn clique who had admitted to cozying up to "more than 30" warm bodies was as small as my high school chess club -- if I'd landed in the same lofty percentile of SAT takers, I'd be president of Mensa.

Compared with the experiences of my nearest and dearest, not to mention the stars of "Sex and the City," these numbers just didn't add up. Take my own personal control group, a clutch of women between the ages of 28 and 45. Compared with my gal pals, I was nestled comfortably in the middle, statistically speaking. I have friends who can't (or won't) count the legions but, when pressed, volunteer that it must be somewhere "between 80 and infinity," as my friend M. likes to say. By this benchmark, I have barely warmed up.

No sooner had I adjusted to my new self-image as the Queen of Free Love than I skimmed an intriguing treatise on light-reflecting lip gloss and dived into a tract about the born-again virgin movement, otherwise known as the "new chastity."

I admit it, I'm frantically suspicious of any noun that finds itself modified by the compound adjective "born-again." The birth process was messy enough the first time around, why go looking for a replay?

The thrust of this particular neo-virgin's epiphany was that by having taken lovers before sacred vows, she had allowed herself to be horribly used and made herself vulnerable to hurts both real and imagined ("He promised he'd call and didn't," "Will he find my thighs too big?"). By taking herself off the market, she was preserving a rare and precious gift for her as-yet-uncorporeal life partner. Her reasoning made "The Rules" seem almost permissive -- wasn't sex allowed as a form of manipulation, if not for outright pleasure?

The more I read about this backpedaling to a state of grace, the more incredulous I became. In some unfortunate places, women are stoned to death for an ill-considered deflowering, so let's not obsess on the pain of being stood up for deep-dish pizza. But what really offended was the idea that somehow, by making all these right and careful choices, you could avoid disaster, you could protect yourself from hurt -- and you could blossom forth from hormone-crazed teen to white-shrouded bride with hymen intact, ego unbruised and no psychic scars.

A corollary to this theory, of course, is the well-worn clichi that within every man there lurks a grown-up frat boy, a sex-crazed sociopath who will promise anything to get what he wants. Thus, as they would see it, women have no choice but to quash their desires and grimly navigate through the dating rapids without getting wet on their way to the altar. And if you weren't lucky enough to get the message before a sweaty roll or two, then you'd better recant with the zealotry of a convert.

When I discussed this with my own cabal, we recalled our various couplings as embracing everything from high passion and easy friendship to indifference, irritation, pain and real heartbreak. We also admitted that we were as likely to be the inflicters as the recipients -- dating someone out of boredom, or because he was young, cute and spoke Italian, or because we wanted to have sex one more time or didn't want to be alone on New Year's Eve.

As we mentally retraced our steps down the boulevard of unmade beds and reflected on the various people we'd taken there, we achieved consensus on a few things: Sometimes we were treated well -- and sometimes not. Sometimes we'd acted with decency -- and sometimes we were embarrassments to the human race. But one thing was clear: We had no great wish to write anyone out of our romantic histories. Besides making us stronger and emotionally richer, we have way better stories to tell as a result of all that messin' around.

The idea that avoiding sexual intimacy will render you a better mate relies on a kind of twisted logic. Instead, the more calculated risks we take when rolling through the sharky waters of romance, the more opportunities we have to hone our skills of engagement, empathy and judgment -- something we're by no means born with. For while my husband has made it clear that the subject of my romantic past makes him decidedly squeamish, I credit it with making me smart enough to recognize him as the soul mate he has turned out to be -- my last and best hurrah.

Deborah Bishop is a San Francisco freelance writer. She also is the author of "Hello Midnight: An Insomniac's Literary Bedside Companion."