Whorehouse of the Caribbean

Castro promised to clean up Cuba, but the new poverty has driven many to sell what they can, including their bodies. 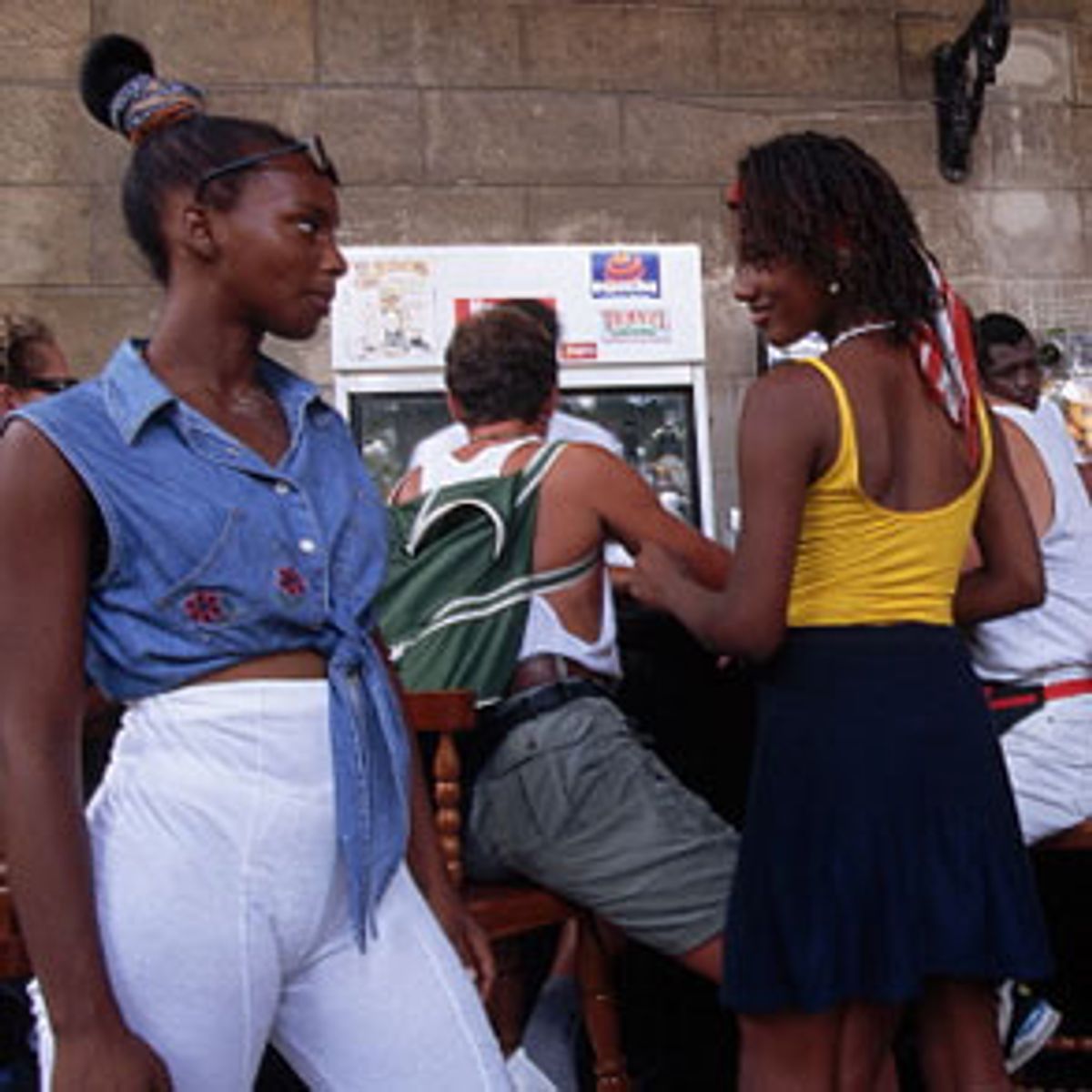 A female prostitute in Havana is rather descriptively known as a jinetera, or jockey. A male hustler there is not a jinetero, but a pinguero, which translates as something like penis professional or dick worker.

Officially, there are jobs for all in socialist Cuba. But the average monthly wage is equivalent to $8. To survive, plenty of people are on the make. So depending on his preference, the tourist to Cuba has no trouble at all finding someone to ride his little race horse or perform professional action on his dick.

Besides kicking out the Yanquis and redressing the island's extremes of wealth and poverty (the wealth is all gone now, and everybody is poor) Fidel Castro's 1959 revolution set out to purify the people's behavior. Cuba would no longer be the "whorehouse of the Caribbean." Female prostitutes were offered training as drivers and secretaries; those who demurred got holidays in prison. Homosexual men were spared the retraining programs and sent directly to jail -- or to forced labor in the sugar cane fields.

To Reinaldo Arenas, the outrageously queer Cuban novelist whose memoir "Before Night Falls" has just been made into a film directed by Julian Schnabel, this official homophobia had a paradoxical effect. "There was never more fucking going on than in those years, the decade of the sixties," he wrote (as he was dying of AIDS in New York, in 1990), "which was precisely when all the new laws against homosexuals came into being, when the persecution started and concentration camps were opened, when the sexual act became taboo while the 'new man' was being proclaimed and masculinity exalted." And according to Arenas, it wasn't only faggots who sought the solace of male flesh. "Many of the soldiers who marched, rifle in hand and with martial expressions, came to our rooms after the parades to cuddle up naked, and show their real selves, sometimes revealing a tenderness and true enjoyment such as I have not been able to find again anywhere ... There was, moreover, no prostitution. It was pleasure for pleasure's sake."

Cuba's official repression of homosexuals has ended, although other forms of repression remain; you cannot, for example, purchase Reinaldo Arenas' books there. Officially, prostitution has been eliminated, but the wrecked economy forces many people to sell their bodies. Effeminate men are no longer denounced and sent away, but there is still no permission for anything vaguely resembling the public gay institutions Americans take for granted.

That does not keep Havana's gays from gathering openly, at places like the broad sidewalk in front of the Yarra Cinema. On weekend evenings, snappily dressed, hot-to-trot gay boys in the hundreds congregate outside the Yarra. They are joined there by all sorts of others drawn to the fissure of cultural free space that these men, in their brazenness, crack open; other people whom, in the very loosest sense, and in the context of a police state, we might also call rebels and queers. There are bored teenage girls and boys, in from the dreary high-rise Stalinist suburbs, showing off their platform shoes and piercings; willowy model wannabes in teensy ensembles of day-glo Lycra; motorcycle outlaws who only lack the bikes. The sidewalk outside the Yarra is where you go for word of mouth on the evening's floating party or transitory drag show, or perhaps to make a connection for marijuana or cocaine. You can also go there -- or to any of the city's other gay hangouts -- to pick up a pinguero.

It was in one of those gay hangouts -- the south end of Havana's Central Park -- where I met a fetching hustler one afternoon when I was there recently for my work as a travel writer. He was perhaps 30, enticingly mature but quite degenerate -- golden-skinned, with the lean and hungry look, a thick moustache and several days' growth of beard on his handsome face, his furry chest clearly visible beneath his soiled tank top -- just my type of mildly rough trade, as it happens, though I wasn't actually looking. I didn't need my finely-tuned gaydar to know that he was gay, when I came upon him lounging splay-legged on a bench. His instincts obviously told him the same about me. I sat down beside him. He immediately offered me sex for money. But I just wanted to chat about conditions for gays. Really.

In the course of the conversation, a friend of his showed up. This was a small, lithe, sweet-faced 18-year-old from the town of Holguin. He said he was bisexual, had a pregnant wife at home, had come to the city to find work in construction but couldn't get hired because he didn't have a local address. Now he was living on the street, trying to turn tricks but having little success because -- so he claimed -- he didn't have any nice clothes and thus couldn't work Vedado, a classier neighborhood. He explained all this in a whiney tone -- Jesus, who wouldn't? -- which itself would have turned me right off, had I been in the market for a dick worker. Anyway, youngsters don't do it for me; he aroused my protective instincts, not my pinga.

We all talked for a while, and I took my leave. But the two of them came after me, to beg money. I gave the older one $5 in exchange for a rather satisfying leer. After the younger one said his train ticket home would cost $12, I gave him $15, extracting a promise that he would return to Holguin the very next day. He practically kissed my feet in gratitude. More fool me: I encountered him the next Friday night in the throng on the sidewalk outside the Yarra Cinema, where he followed me down the street bleating abject apologies.

I don't know whether the numerous other gay men with whom I locked eyes and exchanged wordless intimations of desire, in my rambles around the city, would have wanted to go with me for my money, or perhaps for a restaurant meal, or for my perfect body alone -- because I didn't actually talk with any of them. Anyway, I would have had no place to take them. The successful sex tourist to Cuba must stay not in a hotel but in a rented room in a private home, because Cubans are not allowed to go upstairs in tourist hotels. Few Havana residents have any private space of their own, and the alternative is an hourly room in a funky love motel. In the lobby of the five-star joint where I was lodged, I watched the ever-present, grim-faced security team bust a pair of Italian men who were trying to smuggle a couple of jineteras into the elevator. The tourists didn't get into any lasting trouble. I don't know what happened to the girls after they were escorted out the front door. Actually the johns' error might have simply been the failure to offer a bribe. It's said that anything can be had in Havana, for dollars.

So my experience of pingueros is admittedly small. But I met many people who were prostituting themselves, if not sexually. One day, a charming retired printer approached me as I was photographing a monument, offering to be my guide to the city. He insisted that he just wanted to be my friend. But of course, he also wanted me to pay him; this idea of friendship was a fiction he needed to maintain, to avoid humiliation. Could he make ends meet on his pension? No, he leaves home every morning and spends the day hustling one way or another for extra money.

The taxi dispatcher in front of my hotel turned out to have once worked in the Venceremos Brigade, a program that used to bring American New Leftists on work trips to Cuba. It was through that group that I made my first visit there in 1970 when I was -- naively -- a supporter both of Fidel and gay liberation. (The young men who were rounded up for forced labor then were described as criminals and degenerates, not as the homosexuals they mostly were, and I believed it.) After he and I discovered this rather dim connection (we were participants in the Brigade in different years), and after I gave him a $2 tip for having called me cabs over the course of several days, he made a big shit-eating show of greeting me every time I went in and out: "How are you today, Johnny, don't you need some taxi?" His business card identified him as holding a doctorate in economics. On the cruise ship on which I traveled to Havana, the dining room staff were all Cubans -- among them doctors, architects, a physicist. The Cuban government takes 80 percent of their salaries, but it's still worth it to them -- they get to keep the dollar tips.

Arriving one day at an inexplicably locked art exhibition, I met another frustrated viewer who turned out to be a journalist on the staff of the official government daily Granma. He eagerly offered to chat, to "exchange ideas" with this fortuitously encountered North American colleague. Uh oh, I thought, here comes the Party line, but we went for coffee. I asked him why the streets are so full of people all day long; don't they have jobs? He explained that nearly everybody has one, but they don't bother to go because the salaries are worthless and they're doing other things to survive. Including selling their bodies -- which he had never done himself.

But had I given him an opening? In the next breath, he told me he earns the equivalent of $10 a month, and that he needed $9.50 to buy his kid a pair of shoes. Could I help him out? My gaydar is as sensitive as a smoke detector; this guy was no smoldering queen. Then what was he asking me for, exactly? A handout? Nobody wants to see himself as a beggar -- certainly no working professional does. Money for sex, then? Was that why he'd brought up the question of prostitution? In his circumstances, it might have actually been the more dignified option: At least it would have meant an exchange. I suppose there are some gay travelers who would have savored the powerlessness of a heterosexual like him feeling coerced into sexual service, especially at such a bargain rate. He was a nice guy, and I felt sorry for him. And I didn't have the heart to ask him to clarify what he was asking of me. I bought his coffee, but I didn't give him any money, either; I was still feeling foolish and ineffectual over my philanthropy toward the boy from Holguin.

Poor Fidel. He tried to rout the Yanquis; 40 years later, the U.S. dollar is the only currency in Cuba with any value. He beat the tar out of the faggots, and look at them now, in their irrepressible hundreds and thousands, shaking their bon-bons on the public pavements. He made honest women of the hookers, and now every other person you meet is some kind of whore.