The Pill for men?

My drug-peddling dad says it's a simple problem of supply and demand. 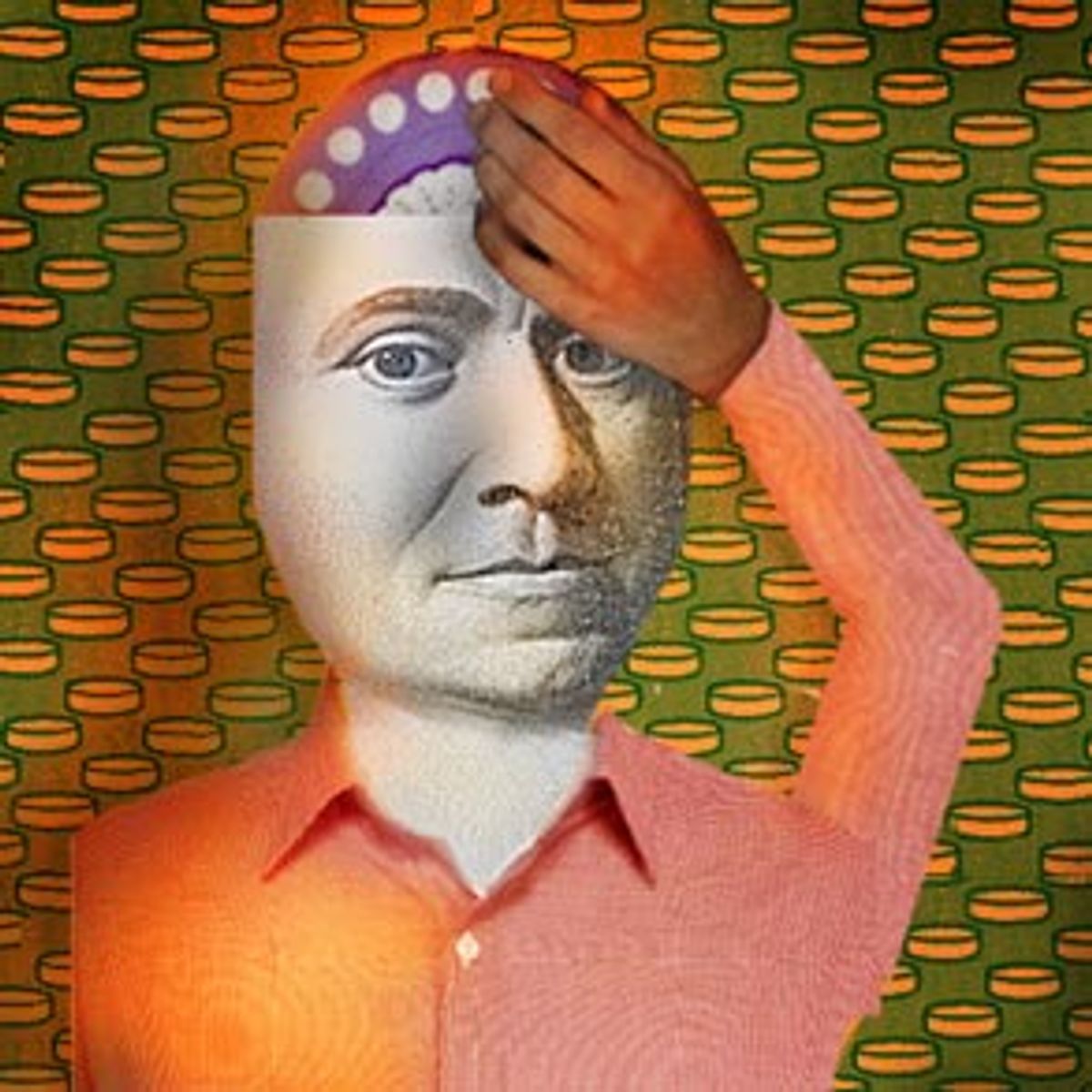 Back in middle school, when my classmates were writing research papers on frogs or presidents, I wrote one on Valium. The joke in the family was that my dad pushed pills for a living. He still does.

For the past 40 years, my father has worked in the sales division of a major pharmaceutical company. His special focus has been women's health: He spends a good part of every day peddling the Pill.

Like most teenagers, I was reluctant to talk about sex with my parents, but birth control pills were dinner table conversation in our house. Although the discussion never ever entered into the taboo territory of the possibility of my sexuality, my father and I would argue about why all the major methods of birth control were aimed at controlling women's fertility rather than altering men's. My father would insist that birth control pills were safe, and that there wasn't really any demand for other methods of birth control. It was supply and demand, he would maintain; if there were any demand, the pharmaceutical companies would supply it.

He and I would argue, and then I would happily use all the various freebies my dad would bring home: Notepads and pens emblazoned with the names of various pills were the materials I used for my early assays into the world of writing. Recently, my dad presented my 4-year-old son with his very own notepad and clipboard, emblazoned with the name of a popular nonsteroidal, anti-inflammatory drug, on which my child can pen the "books" he is beginning to write.

Today, I don't use the pens and pads, I take the pills -- the birth control pills. I even take the brand that my dad's company makes. (Those pills did, after all, pay for my college education.) But I'm not trying to pass on a childish sense of faith in the company Grandpa works for or in the products he sells. I don't take the Pill with the naive belief that it's safe.

Way back in 1969, Barbara Seamen published what remains a revolutionary book -- "The Doctor's Case Against the Pill" -- in which she argued that the Pill posed serious health threats to women, from infertility and increased heart attacks to blood clots. Scary stuff. More recently, a panel of federal scientific advisors voted to place steroidal estrogen -- the kind used in birth control pills -- on the government's list of cancer-causing substances.

I don't buy everything Seamen says, and I'm not surprised by the latest publicity about estrogen's dangers. I know full well that ingesting that small amount of hormones each day creates fundamental changes in my body that the pharmaceutical industry doesn't begin to and no doubt doesn't care to understand. I have no illusions about the Pill's safety. I can't imagine many women do.

Those who took the first generation of birth control pills (in circulation before 1975 and very different in dosage from the ones I take today) recently learned more about their risk of cancer from a study published in the Journal of the American Medical Association. Women in families with a history of breast cancer (five or more relatives, including a mother or sisters) who took those early pills are now being told they have an 11 times greater risk of breast cancer.

Because fewer than 10 percent of the cases of breast cancer each year are familial or inherited, we're not talking about all women. And these same women are also likely to have a higher risk of ovarian cancer, the more deadly cancer against which the Pill protects.

So the study presents bad news, but not terrible news. It is the kind of study that seems to come out on an annual or biannual basis. Whatever the particulars, I think this research leaves many of us with a lingering feeling of dis-ease that takes us right back to Seamen. Are American women safe? Did the U.S. pharmaceutical industry feed us pills that were not safe? Is the industry continuing to do so? Does anyone care about women's health?

George W. Bush recently professed some concern over women's health. In the second presidential debate, Bush mentioned that he would support the Food and Drug Administration's approval of RU-486 but that he still had some questions about whether the new abortion pill was safe.

Was Bush concerned about whether RU-486 would be more dangerous to my health than either a surgical abortion or an unwanted pregnancy and birth? Of course not. Bush's invocation of questionable safety with regard to RU-486 was a not terribly subtle allusion to the fact that he would try to manipulate the issue of women's health to overturn the FDA's recent approval of RU-486, which he opposes politically.

I don't know about other women, but I don't feel warm and fuzzy when Bush gestures toward concern for my health, especially with regard to reproduction.

The health of women who happen to be pregnant hasn't been terribly valued of late. Several state legislatures have passed laws banning safe medical procedures used for middle- and late-term abortions without allowing for exceptions to protect the health of the woman. These legislatures, in other words, have made clear that once there's a fetus in the picture, a woman's health, and sometimes even her life, are no longer worthy of notice.

In Stenberg vs. Cahart, the Supreme Court intervened and countermanded such a law in Nebraska, but by only a 5-4 vote. In other words, a majority of the Nebraska Legislature, along with a bare minority of the Supreme Court, believes that a woman should be forced to carry a fetus to term regardless of whether her pregnancy and delivery might do serious damage to her health.

Thus safety, in the world of reproduction, is a relative thing. Which gets back to why I take the Pill. Controlling my fertility is a major concern -- I do not wish to become pregnant, and the Pill offers me the greatest security that I will not get pregnant. Taking the Pill also eliminates any monthly anxiety; I get my period on the same day, and often at the same time of day, each month.

Without the Pill, even a woman with a regular menstrual cycle periodically experiences the nagging concern about a late period, which can build to a crescendo of anxiety when her period is just a few days late. I can't measure the toll of that anxiety on my mental and physical health, but I take the Pill estimating, among other things, that my confidence that I will not become pregnant is significantly valuable to my overall health.

Why do I care so much about avoiding an unintended pregnancy? After all, I live in one of the few remaining areas of the country where abortion is still easily accessible. I'm blessed with a wonderful OB-GYN who performs all the functions of her job, including providing abortions to patients. Unlike women in other areas of the country, I would face no mandatory waiting period or counseling, no long-distance travel and no need to obtain anyone else's consent. I probably wouldn't have to face harassment from protesters, and I would probably opt for RU-486. But would I feel completely safe?

Once again, safety is a relative thing; real safety would mean never having to take a pill and never having to face an unwanted pregnancy and abortion. Hey, here's a novel idea: How about a pill for men? Maybe that pill wouldn't be safe either, but at least my husband and I could trade off the risk. But as my dad still insists, it's all about supply and demand. If the American public really wanted male contraception, the pharmaceutical companies would certainly supply it. Right?