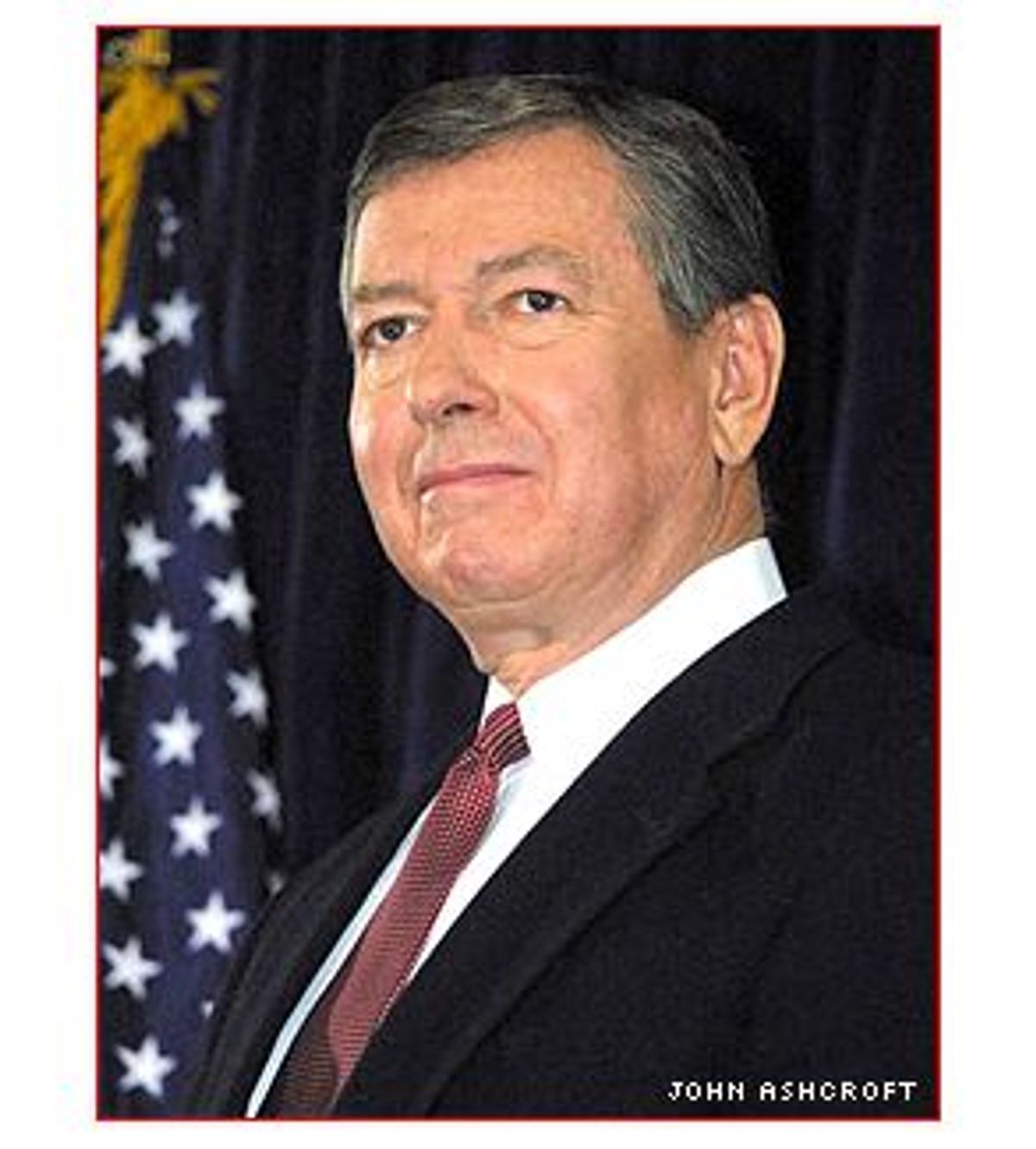 Will John Ashcroft gut the Justice Department's antitrust suit against Microsoft? So far, that's the only question the technology press has been asking about the ex-senator from Missouri slated to become the next attorney general of the United States.

But while there is plenty of reason for monopoly-busters to be concerned about Ashcroft's well-known antipathy to government intervention in the economy, antitrust is hardly the only technology issue Ashcroft has a position on that's worth examining. In fact, as far as hardcore Internet citizens are concerned, Ashcroft -- currently considered the left's Public Enemy No. 1 -- scores pretty positive marks. According to high-tech policy experts, Ashcroft is pro-privacy and pro-encryption. Compared to the Clinton administration, suggest some civil liberties watchdogs, Ashcroft could be a geek's best friend.

There's little doubt that, given his druthers, Ashcroft would rather not continue the federal assault against Microsoft. Shortly after he was nominated for attorney general, a letter from Ashcroft began to flit across the Net. It focused on Microsoft, and contained passages such as "the best thing Washington can do to promote competition in high technology and on the Internet is to let these innovative and exciting companies do what they do best." As attorney John Noble noted when he posted the letter to an American Bar Association mailing list, "This is not a guy who's going to be comfortable presiding over a breakup of Microsoft."

But is Microsoft the measure of the man? Not quite, says Marc Rotenberg, executive director of EPIC, the Electronic Privacy Information Center, an online civil liberties group. Ashcroft should be judged, says Rotenberg, by how well he protects privacy from government and corporate intrusion, and by how he handles pornography, copyright infringement and other forms of cyber-crime that collide with the right to free speech.

There are plenty of reasons to be hopeful, says Cindy Cohn, legal director of the Electronic Frontier Foundation, another civil liberties watchdog that focuses on online issues. Unlike many of his colleagues in Congress, says Cohn, "Ashcroft has repeatedly shown a breadth of interest in important Internet issues."

The key issue is privacy -- one of the Net's most volatile hot buttons. Ashcroft "was one of the guys that got it," says Alan Davidson, who has worked with Ashcroft as staff counsel at the Center for Democracy and Technology, an online civil liberties nonprofit. "He realized that it wasn't worth sacrificing the privacy of everyone online just to catch a few bad guys."

How exactly did a man like Ashcroft win praise from civil libertarians? By taking a surprisingly progressive point of view on the issue of encryption, say observers. During the Clinton administration, the federal government generally supported the policy that so-called "strong encryption" -- encryption that is not easily breakable -- should not be widely available to the general public. In particular, the Clinton administration opposed any weakening of the ban on the export of strong encryption software to foreign countries, heeding law enforcement fears that criminals would be able to take advantage of encryption software to hide their activities.

Ashcroft refused to follow along. "He held four or five meetings at his office and had not only the conservative groups," says Shari Steele, the executive director of the Electronic Frontier Foundation. "He also pulled in the ACLU, us, EPIC and other progressive groups to talk about their concerns."

Then, in 1997, he introduced the E-Privacy Act. If passed, the bill would have relaxed government controls on encryption support. It largely agreed with the arguments of Steele and others who claimed that encryption was needed to protect privacy and that the companies producing encryption software shouldn't be forced to fall behind international competition because of outmoded legal restrictions. Ashcroft's strong law-and-order background -- he was a prosecutor before joining the Senate -- helped shift the tide toward the more liberal policies now in place, Davidson says.

Ashcroft wasn't entirely alone, says Steven Levy, author of the forthcoming "Crypto." "Ashcroft wasn't really the first. [Sens. Patrick] Leahy [D-Vt.] and Conrad Burns [R-Mont.] were the ones who got out in front, who were there earliest. And the one which opened a lot of eyes was John McCain, because he switched sides."

But Ashcroft "was really helpful in terms of getting the controls softened," says Davidson. "He had a really progressive stance on these things, and coming from someone who had a law enforcement background, that stance was really important."

Ashcroft's bill aimed to do more than just loosen the reins on encryption. It also made it harder for the FBI and other law enforcement agencies to spy on American citizens. Surveillance laws were amended under the bill, allowing cellphone carriers, for example, to keep customers' location information private unless a court order found that there was "probable cause to believe that an individual using or possessing the subscriber equipment is committing, has committed, or is about to commit a felony offense." ISPs were given similar protections.

Ultimately the bill didn't pass, although some of the location provisions were folded into H.R. 5018, a bill that's expected to be reintroduced soon. But Ashcroft has introduced other pieces of similar legislation since 1997 and has spoken frequently of the need for privacy protections. Since Ashcroft is clearly sensitive to individual rights, many experts -- including Vint Cerf, an influential Internet pioneer -- hope that he'll act as a bulwark against what they expect to be an oncoming wave of paranoia.

However, there is a fairly significant counterweight to Ashcroft's pro-privacy legislation: his voting record on social issues. Ashcroft's reputation as a cultural Puritan appears to be well earned. He supports a bill that aims to reduce juvenile crime by paying cops to search for obscene content in video games, music and other media. He also voted for the Child Online Protection Act (COPA) and the Communications Decency Act (CDA) -- laws most Internet advocates consider oppressive government intrusions violating the First Amendment. Given that he will now have the power to enforce these same laws, some fear that Ashcroft will aggressively prosecute the prurient as if the Web were a modern-day Sodom and Gomorrah.

"A lot of adult content businesses fear that with Ashcroft, we're going to have an Internet version of what Larry Flynt went through," says Mark Tiarra, executive director of United Adult Sites, a trade association of over 500 adult content companies. "Someone is going to be attacked in order to come up with the defining case for the medium."

So how will Ashcroft's libertarian, hands-off stance toward computer companies who want to sell encryption software to all buyers intersect with his predilection to crusade against pornography? No one knows yet. But for now, the techno-cognoscenti have chosen to take an optimistic stance. They expect to work with Ashcroft. Their mood could best be described as one of cautious hope. Since the Clinton administration helped pass the Digital Millennium Copyright Act and "a lot of other bad, bad laws," says Jamie Love, director of the Consumer Project on Technology, Bush and Ashcroft will have a hard time doing much worse. In fact, they may even do better.