The president surprises his critics by, at the last possible moment, signing on to the treaty for an International Criminal Court. 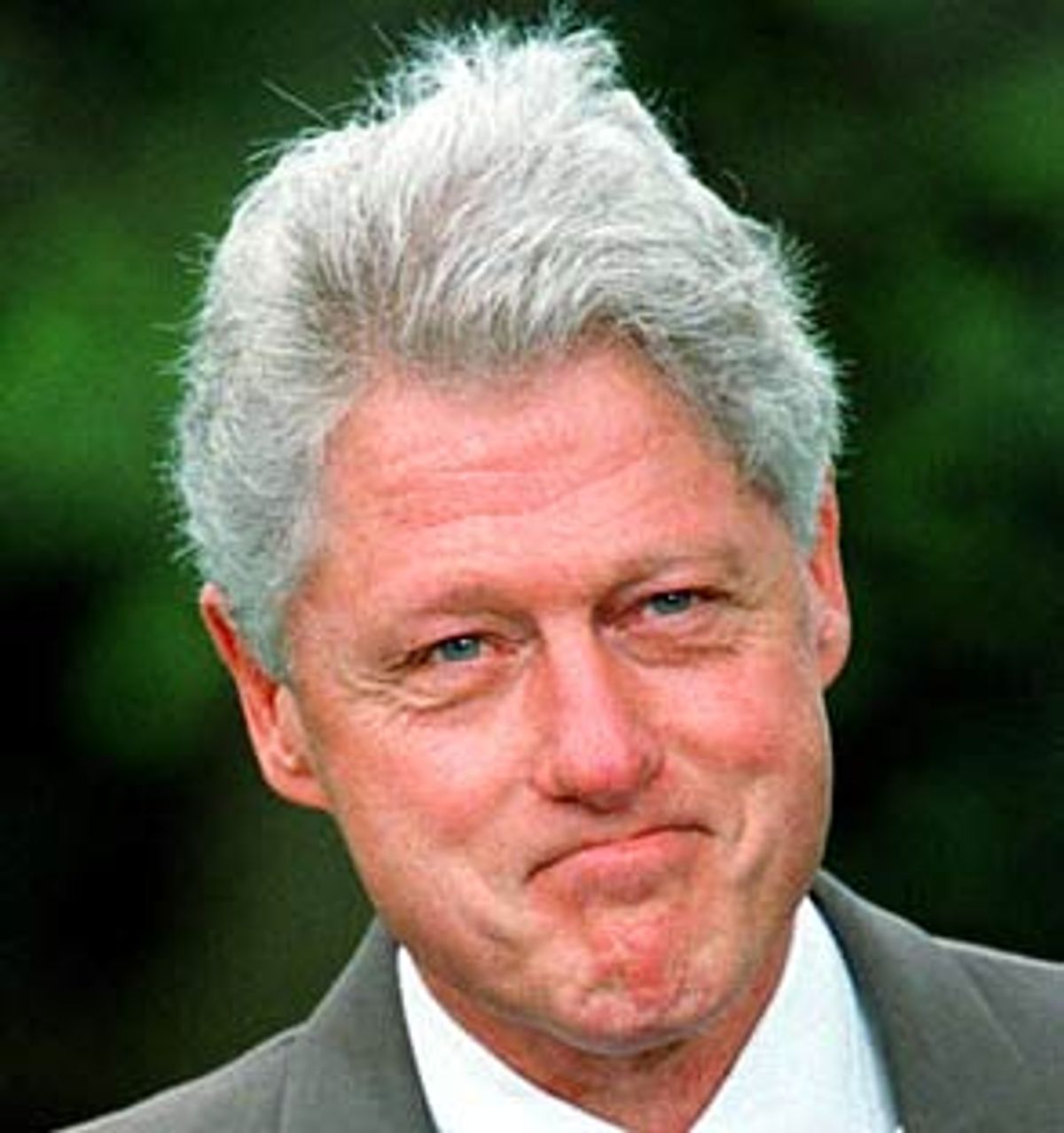 Back in the early summer of 1998, delegates from over 160 nations gathered in Rome were wrapping up work on a treaty to establish an International Criminal Court. The court would have the power, for the first time in history, to try and convict individual perpetrators for particularly heinous violations of the laws of war, for crimes against humanity and for genocide -- it would be not an ad hoc Nuremberg or Yugoslav/Rwanda-type tribunal, but rather a permanent court with generalized and ongoing worldwide jurisdiction, a court whose existence the U.S. had been advocating for years, but whose birth the U.S. delegation now suddenly seemed just as hellbent on forestalling.

I remember there was a lot of talk there in the halls about the League of Nations. "If the U.S. walks out on this court," the Syrian delegate assured me, his eyes twinkling with grim satisfaction (he was all for it; he couldn't wait), "it will be like the League of Nations." Perhaps, I remember thinking at the time, but in that case ought President Clinton be cast in the role of Woodrow Wilson, the League's strongest advocate, or that of Henry Cabot Lodge, its most ferocious opponent?

Of course, the answer, in retrospect, was both. With regard to the court, Clinton wanted to play both Wilson and Lodge. And not half and half: not a wily Wilson disguising himself as a grimly realistic Lodge, or vice versa. Rather, Whitmanesque, Clinton wanted to contain multitudes. He saw no contradiction in being both Wilson and Lodge, each 100 percent and both simultaneously.

Which is to say that he was approaching the International Criminal Court in much the same way he'd approached just about everything else -- gays in the military, national health insurance, campaign finance reform, land mines, Bosnia, global warming -- in his presidency.

In this particular instance, both the Pentagon and Senate Republicans, led by Sen. Jesse Helms, R-N.C., were adamant in their insistence that the U.S. ought never sign on to any sort of international tribunal that might ever, under any circumstances, claim jurisdiction over any American soldiers or officials. Such justice was fine for the Saddam Husseins or the Pol Pots of the world, American opponents of the treaty argued, but not for us. Hence the court would be fine, so long as the U.S. was able to maintain veto control over its operations, for example, by way of strict Security Council oversight.

But virtually all of the rest of the world's delegates in Rome protested that justice would hardly be universal if great powers could willy-nilly exempt themselves from its provisions. Furthermore, it was the Security Council's propensity for tying itself in veto-knots (France covering for Rwanda's genocidaires, China sheltering the Khmer Rouge, Kissinger-era America backstopping Pinochet and so forth) that so often led to paralysis and the unchecked proliferation of precisely the sorts of horrors this court was being created to address.

The U.S. delegation attempted all sorts of other gambits to effect the same outcome (total immunity for Americans), each more convoluted yet transparent than the one before, but to no avail. In the end the vote in favor of the treaty was overwhelming, with the U.S. stranded in opposition alongside such other holdouts as China, Iraq and Libya.

In the months that followed, considerable pressure was brought to bear on Clinton to stand up to the treaty's domestic opponents. It was pointed out that in fact all sorts of safeguards had been inserted into the treaty, at U.S. insistence, to forestall frivolous and even not-so-frivolous prosecutions of American nationals. Notably there were the complementarity provisions that decreed that any ICC prosecution could be trumped by a good-faith investigation and, if need be, prosecution, on the part of domestic judicial authorities. (The ICC was being created for precisely those instances where local authorities were proving unable or unwilling to pursue such investigations.)

The Pentagon and the Senate opponents were unswayed, however, and Clinton, for all of his idealistic pronouncements to the contrary, seemed incapable of standing up to them. "The problem here isn't political," one longtime observer of the process pointed out to me a few months ago, "but rather biological. Has anyone ever heard of an instance of an invertebrate's suddenly and spontaneously growing a spine?"

And then suddenly, seemingly spontaneously, at the last possible moment this past weekend (Dec. 31, the last date a country could take advantage of the as-it-were "safe harbor" provisions of the treaty by signing onto without simultaneously ratifying the document), this particular invertebrate did indeed up and sprout a spine.

Alone up there at Camp David (Barak and Arafat had failed to show for their last-minute Legacy-Assuring Summit), pickled perhaps in thoughts regarding the eventual judgments of history ("Wilson? Lodge? Wilson? Lodge?"), Clinton bucked the naysayers and did in fact affix his signature to the Rome Treaty. Albeit, he did so noting that the signature would be meaningless without eventual Senate ratification, and urging the next president to wait a good while (and to continue fighting the good fight against eventual American susceptibility to the treaty's provisions, now from within the treaty process frameworks) before ever submitting the document to the Senate.

The less-than-stirring tone of Clinton's statement in signing onto the document put me in mind of the appearance made by Undersecretary of State David Scheffer before Jesse Helms' Senate Foreign Relations Committee back in July 1998, a few weeks after the conclusion of the Rome Conference, where Scheffer had been the administration's point man. At the time I remember thinking how the man might have been excused a certain feeling of conceptual whiplash.

For if he'd been being treated, by the end there in Rome, as a sort of pariah or leper, now back in Washington he was being unanimously praised as a kind of returning hero. Positions that had provoked nary a chord of resonance in the conference hall in Rome were almost drowned in a rising chorus of defiant triumphalism on Capitol Hill.

Sens. Helms, Rod Gramm, Joseph Biden and Dianne Feinstein each addressed Scheffer in turn, congratulating him on the fortitude of his resolve and pledging their undying contempt for that monstrosity spawned in Rome. Not one of them focused on Bosnia or Rwanda or Pol Pot or Idi Amin or the Holocaust or Nuremberg. (Sen. Feinstein did wonder about the possible implications for Israel.) They all seemed utterly and almost uniquely transfixed by the treaty's exposure implications for American troops, vowing to protect them and to fight it.

Across the ensuing hours, it became possible to identify what may have been the true underlying anxiety of the American delegation all along, never broached by any of them back in Rome but veritably palpitating just beneath the surface even there. Helms wasn't afraid to name it outright. The status of individual peacekeepers in some Mogadishu alleyway had never been the real concern, for all its near-obsessive rhetorical focus. Rather, as Helms picked off the examples defiantly, he was going to be damned if any so-called international court was ever going to be reviewing the legality of the U.S. invasions of Panama or Grenada, or the bombing of Tripoli or Hanoi, and hold any American presidents, defense secretaries or generals to account.

"I've been accused by advocates of this court of engaging in '18th century thinking,'" Chairman Helms said in concluding his statement. "Well, I find that to be a compliment. It was the 18th century that gave us our Constitution and the fundamental protections of our Bill of Rights. I'll gladly stand with James Madison and the rest of our Founding Fathers over that collection of ne'er-do-wells in Rome any day."

At some level, of course, Helms was way off the mark in his choice and characterization of antecedents. James Madison, for one thing, was a Federalist -- with Hamilton, the principal author of "The Federalist Papers" -- and as such had precisely, and with great passion, ranged himself against the nativist states' righters of his own day and in favor of a substantially wider conception of governance.

But at the same time, it seemed to me that Helms was on to something. "We hold these truths to be self-evident, that all men are created equal, that they are endowed by their Creator with certain unalienable rights." True, Thomas Jefferson strikingly pitched his Declaration of Independence in an assertion of universal human values, an assertion that, cascading down through the ages, from the Rights of Man (1789) through the Universal Declaration of Human Rights (1948), constitutes one of the principal wellsprings of the law feeding into the International Criminal Court.

But at the same time, Jefferson cast those assertions in what was, after all, a declaration of independence, of separateness, of American exceptionalism -- stirring, defiant themes that had been very much in evidence there in Rome as well and, one suspects, will continue to frame if not dominate most of the coming debate over the treaty's ratification.