Falling for a bad boy

I moved from Illinois to Texas to be with him. Why did I think it could work? 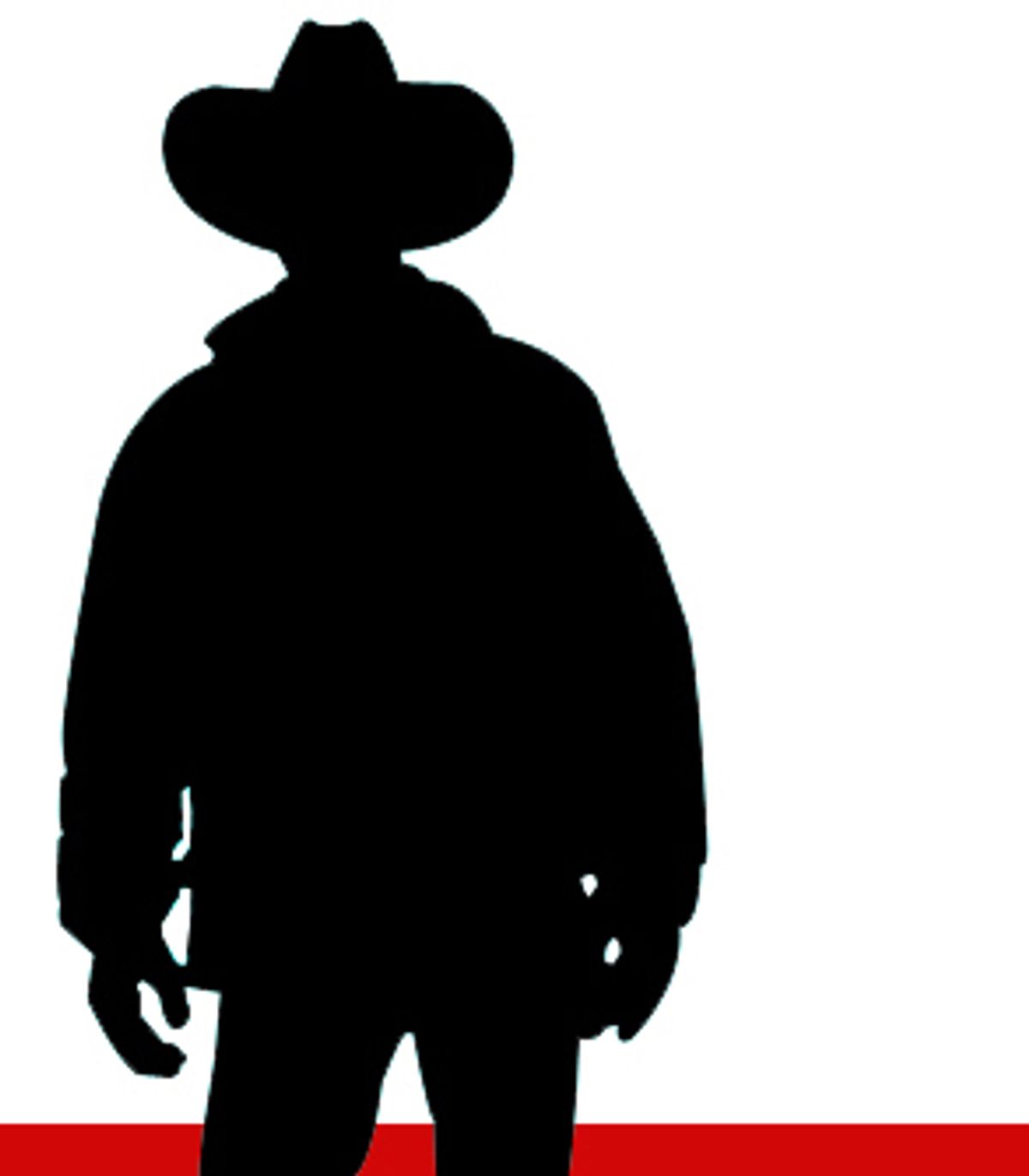 In a smoky, suburban Chicago country-western bar where all the yuppies are milling about like lemmings pretending to be renegades, he is the real thing -- a Texas cowboy, the last of a vanishing breed. He sits alone on the bar stool drinking a Budweiser, glowering straight ahead at an enemy that only he can see, black hair curling over his collar, 6 feet of solid muscle, controlled energy and rage.

You walk up to the bar next to him and do your best "beautiful girl waiting patiently for a drink" pose, expecting him to turn his scowl on you and get you a drink, but he ignores you and that's when you're hooked. You ask him to dance. What's your sad story, he asks. Every pretty girl here has a sad story, or she'd be somewhere else.

You spend the rest of the night circling and sniffing each other like wolves, jousting and jesting, parrying and partying. At 2 a.m. when the ugly lights go on, you barely notice, so spellbound are you.

Your girlfriends roll their eyes and stamp their feet impatiently. But you're a take-charge woman, not into the waiting-by-the-phone-for-a-man thing, so when he asks you for your phone number, you tell him that you'll take his instead.

You drive home in a daze, drunk on adrenaline, alcohol and lust. At 10 a.m. the next day you dial the number. He has a voice made for phone sex: deep and husky with a Southern drawl. He calls you "Bubbette" and you love it.

The next day he drives up to your antiseptic suburban office to take you to lunch and eyes you more hungrily than the menu. Your black co-worker, who saw him walk in while she was standing outside smoking a cigarette, tells you: "Girl, that's some fine piece of white meat!"

Within 48 hours you are addicted to him like Vicodin. He's in town for just a few weeks, he says, to sell time-shared condominiums, then he's going back to Austin, Texas, the "bull's eye of the universe." He tells you that people who buy time shares deserve to get taken advantage of, because they are deadbeats greedy enough to come in for the free gift. You've got to tie them down and make them buy, he says.

He stands you up the night his brother comes to town, and you look out the window every 10 minutes for three hours until you realize he's not coming. Then you sit down on the porch and drink an entire bottle of wine. You call and call and call, and his phone rings and rings and rings.

The next morning you call at 8 a.m. to give him a piece of your mind. Nobody treats you like that, you tell him. But you're going to give him one more chance, because he's the most exciting man who's strutted into your suburban existence in a long time.

He does, however, have an unsettling habit of leaving in the middle of the night after you've fallen asleep. I can't sleep, he tells you. I'm under a lot of stress.

He tells you what an incredible woman you are, how sexy, how intelligent, how perceptive. He tells you you're the kind of woman that a man settles down with ... it's too bad his life is so up in the air.

You begin to believe that you are just the right woman to make this desperado a happy homebody again. At 28, you have already lived with two men and been through several serious relationships, and you're tired of the hunting ground.

Soon it's time for him to go back to the blue skies of Texas, and you can't bear to see him go. You spend a fortune in long-distance charges having phone sex. Talk dirty to me, he says. He asks you if you're a bad girl, and you tell him that you are.

You fly down to Houston and stay with him in a friend's rented house that's rumored to be haunted. He's just getting back on his feet after the divorce, the real estate crash and the IRS problems, he tells you, so he's not quite settled yet. The neighbors glare at you as the two of you pull up in his boat, sunburned and hung over from a day spent partying on the lake.

You walk up the driveway in your Daisy Duke cutoffs and a bikini halter top feeling their cold eyes boring into you. Wait, you want to say. I'm not what you think.

His friends all sell time shares and remind you of characters from the movie "Glengarry Glen Ross." All of them have somehow escaped a 9 to 5 life. They roam the country like wild mustangs -- selling land in Florida in the spring, condos at Vail during ski season and retirement homes at Lakeway in Austin in the summer.

Their next gig is only a phone call away. You're fascinated -- you, who started her first real job two days after college and who has always been motivated by fear.

You've always been a chameleon, able to build rapport with toothless dirt bikers and corporate CEOs, but these people have a wall around them that's impenetrable. His sales team -- four good ol' boys and the brazen, chain-smoking heavy woman with the loud laugh -- all have an engaging charm with a brittle hardness underneath.

You go to Pappadeaux for dinner, and because you don't fit in with them, you drink enough not to care. You all get thrown out of the restaurant when one of his friends makes a scene when the manager turns down his request for another drink. You sense the judgmental eyes of the other customers on you.

Wait, you want to say. I'm not like these people, really.

The next day you're back at Pappadeaux having a rum and coke when he makes a joking reference to prison and tells you "I'm not going back there again." He leers at you, black eyes glinting. Was he kidding or not? He won't elaborate ... he was mixed up in some things when he was younger, he says, but he doesn't want to talk about it. Once again you have the feeling that you are in water too deep to tread in safely.

Back home in Chicago, everyday life is boring, dull and drab, like everything around you has turned into a black-and-white movie. You try desperately to plan your next fix. Again he is elusive and vague. His daughter may be coming to town, he says. He may be going fishing to get a break. He's been working too hard.

At Thanksgiving he calls you from Snowbird, Utah. Why didn't he come visit you if he got some time off? you ask. West, he says. I wanted to go west. Shut up, you tell that little voice inside you that sings out: He wasn't alone, he wasn't alone, nobody goes skiing by themselves. He's a real cowboy, you tell yourself.

When you try to set up plans for Christmas, he heads you off again. He may not be able to afford to fly up, he says. He's still in too deep from his cokehead ex-wife, who ran up all his credit cards and then disappeared. Frustrated, you take the ball into your own hands and book a flight to Houston for New Year's Eve.

Then he'll have to spend the New Year with you. He and his friend take you to a black-tie party with hundreds of strangers where he flirts with other women while you get drunk and chat up other men, hoping he'll notice and get jealous. He doesn't.

The next day as he showers you sneak over to his briefcase and search through it, looking for evidence of who-knows-what. With a sinking heart you find it: a graphic card postmarked Utah. A woman's handwriting promises: "Can't wait till you get here. We're going to have a great time and the wildest sex!"

Stunned, you sit on the bed and contemplate your next move. Do you confront him, ruin your vacation and fly home or say nothing and try to have a good time?

As soon as he gets out of the shower it bursts out of you. All I asked was for you to be honest, you say. I never asked you for a commitment. I just asked for you to tell the truth and let me know if you were going to sleep with someone else, and you couldn't even do that.

We're just good friends, he offers by way of explanation. Her marriage blew up, so she sent me the ticket. You're noticing how marriages appear to blow up very quickly around this guy. Your best friend begins calling him the Anti-Christ. What exactly do you see in him at this point? she asks. You don't have an answer. What does a junkie see in a needle?

In the spring you begin to think about moving to Texas. You mention this while visiting him in Austin, and he reacts as if he's just been bitten by a snake. I'm not ready for that, he tells you. If I want to disappear for three days on the lake and whoop it up, I don't want to have to worry about calling anyone. I don't need any rules.

So you move to Dallas, because it's close enough to Austin to drive but not close enough to totally freak him out. Let him have a little more time, you think. Dallas is a good town, he says. You'll find your husband there and settle down, mark my words.

You decide to give him until Labor Day to get his act together. You see him less and less as the summer rolls by. You spend weekends haunting the bars and falling in and out of love with the 30,000 millionaires who populate the city.

Eventually you fall from second, after work, to fifth or sixth on the priority list -- behind his real estate open houses, friends unexpectedly coming into town, visits from his daughter, fishing trips. Soon Labor Day comes and goes, and you sit alone in your apartment all weekend while he is on a fishing trip with his buddies, or so he says. The next Tuesday you walk into the office of a dating service and sign up. On Wednesday he calls and you tell him what you've done. I'm tired of rowing this boat alone, you say. But I've been swimming as fast as I can, he says.

It's too late, you tell him. You know you'll miss the roar of the ocean, but you're heading out for calmer waters.

Alex Morgan is a pseudonym.