The Grammys jump on the hate bandwagon and anoint "The Marshall Mathers LP" with four nominations. 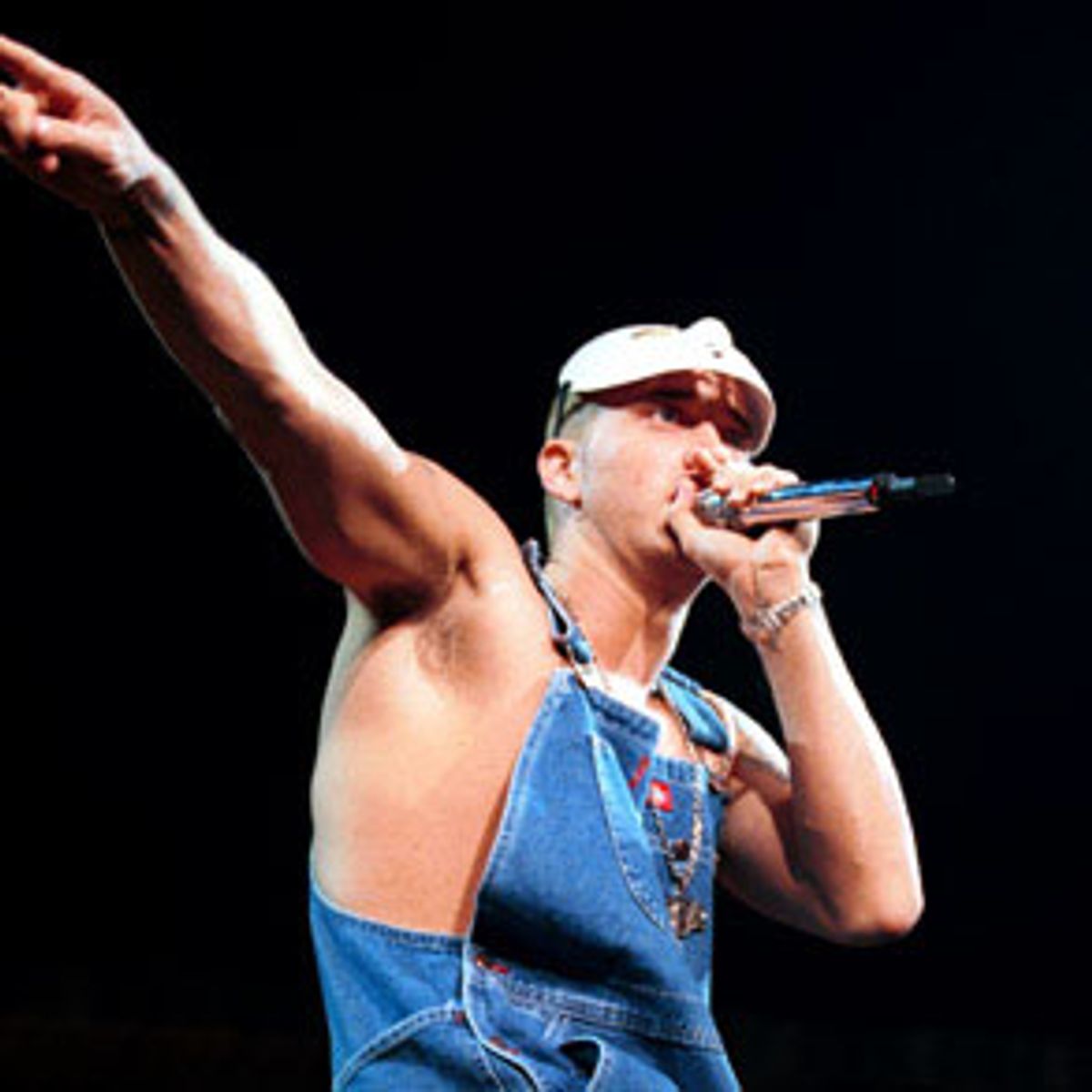 Eminem's "Marshall Mathers LP" was "probably the most repugnant record of the year." So says Michael Greene, president of the National Academy of Recording Arts and Sciences, home of the Grammy.

Yet Greene can hardly contain his glee over the fact that the gay-bashing, misogynist rapper was nominated last week for four Grammys, including the prestigious album of the year award.

Hired years ago by NARAS to give the group's hopelessly out-of-touch awards show some desperately needed buzz, Greene succeeded in raising the Grammy's profile during the '90s in two key ways. One, he weeded out potentially embarrassing nominations and wins -- no one wanted a repeat of 1984, when Lionel Richie's "Can't Slow Down" beat out Bruce Springsteen's "Born in the U.S.A." for top honors. And two, he boosted viewership for the annual network telecast.

Now, with the hand-picked selection of Eminem's hate-filled record as album of the year, Greene's work is complete; the once-respectable albeit feckless Grammy has transformed itself into just another trend-chasing music awards show.

The predictable outcry accompanying Eminem's nominations virtually guarantees the Grammy telecast -- undoubtedly featuring a performance by the rapper -- will be another ratings hit.

As for the message Eminem's honor might send, Greene -- one of the industry's most eloquent spokesmen when it comes to the powerful role music plays in society, and particularly the importance of teaching music to children in school -- simply reads off the standard Eminem apologist talking points: "There is racism and homophobia in this country, and it's an artist's responsibility sometimes to throw things like that in our face in a way that [infuriates] everybody," he told the Washington Post. (His lame defenses were echoed elsewhere in medialand: While hyping Grammy's Eminem picks, VH1's Rebecca Rankin hit a new low: "Some people didn't like what Shakespeare had to say.")

Somewhere there's a hateful white kid in a basement studio who's thrilled: He's seeing strong evidence that if his raps about coons and kikes sell enough units, the music industry establishment will have to accept him. He, like Eminem, is merely throwing things in people's faces and using "the microphone as a therapist," as Greene puts it.

It's interesting Greene threw "racism" into the mix when defending Eminem, since the topic has nothing to do with the "Marshall Mathers LP" controversy. (The record's strictly an anti-woman, anti-gay thing.) Unless of course, you count the fact that it took a white artist to become the first hardcore rapper nominated for album of the year.

Speaking with the Los Angeles Times, Greene defended the Eminem pick this way: "If music is to remain the voice of rebellion, it's got to continue to unnerve and upset parents."

This is a warped conflation of rebellion -- rock's great tradition -- and oppression. Are parents upset that Eminem's lyrics are loaded with profanity and violence -- or because their elementary school child came home distraught after being mocked as a "fag" by his Eminem-loving classmates?

And make no mistake, Greene oversaw the Eminem nomination. In an effort to rescue sagging respectability, several years ago Greene instituted a sort of blue-ribbon nominating committee to oversee the major Grammy categories, like album of the year and best new artist.

Nominations used to be created merely by tabulating votes cast by NARAS members; but the committee was given a free hand to essentially fashion its own list of nominees, thereby honoring some critical darlings and not just the platinum sellers.

That's how the alternative rock band Radiohead's commercially challenged "Kid A" was tapped as an album of the year nominee this year. "Kid A" was a big record among college-radio types, but after a big first week saleswise dropped out of sight. Odds are most NARAS members never even heard the peculiar collection, let alone voted for it.

The question this year was, Would Grammy reach out and anoint "Marshall Mathers LP"? According to accounts in the Washington Post and Los Angeles Times, there were "tear-filled" debates at Grammy headquarters when it came to whether or not to nominate the record for the year's highest honor.

Concerned Grammy members should have saved their tears. In a year that ended with disturbingly soft music sales, and saw a greatest-hits package featuring 35-year-old Beatles songs rank as one of the bestselling CDs of the year, there was no way Grammy was going to walk away from a meal ticket as appetizing as the eight-time-platinum "Marshall Mathers LP."

In the end, according to the Post, "The nominating committee decided that it could honor the recording without honoring its message."

By the same logic, "Mein Kampf" could qualify for a Booker Prize. Maybe Grammy should have checked in with MTV to see what that Faustian bargain feels like. The music channel tried the same Eminem sleight of hand last year by endlessly pumping up the rapper's image while at the same time trying to distance itself from his raw message of hate.

It seems some MTV execs are still having trouble sleeping at night. In response, this Wednesday night MTV, in partnership with the Gay, Lesbian and Straight Education Network, airs a made-for-TV movie about Matthew Shepard, the gay Wyoming college student recently murdered. The show is part of a larger, year-long Take a Stand Against Discrimination campaign the network commissioned when it discovered 90 percent of its viewers felt discrimination was a problem. After airing Eminem videos nearly 1,000 times last year, MTV has now decided he is "not an artist we want to get behind," says a spokesperson.

Now it seems Grammy is more than willing to take over the reins of the Eminem bandwagon.