Kind of a drag

A young man turns himself into a beautiful woman, but the transformation is only skin-deep. 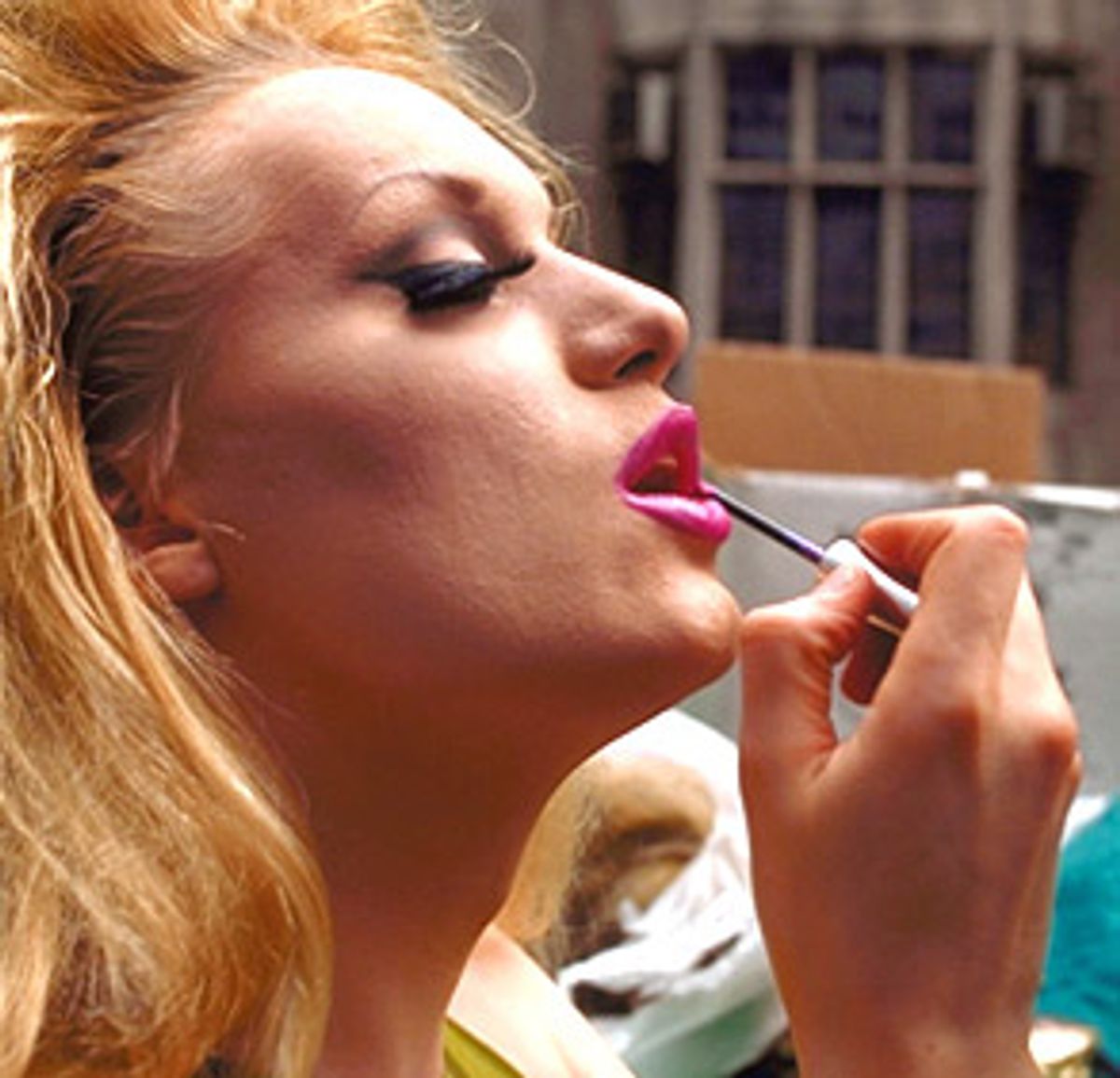 What do men who dress like women want? Some heterosexual cross-dressers say that slipping into breast forms and heels allows them access to a gentler side of themselves, permission to touch each other and -- murkiest of all -- a chance to be the object of desire. Even if they end up looking more like Mrs. Doubtfire than RuPaul, never go out in public and aren't gay, there's still something thrilling about the possibility of inciting male lust -- the kind of lust that shapes the world. Though gay drag queens dress mockingly, they're also making themselves sex objects for a population they don't have sex with -- straight men.

Neither furtive family man nor flamboyant queen, Aaron arrived at his New Year's Eve drag debut by a uniquely convoluted path. It started in art school in Washington, where I first met him. At the time, he was photographing and videotaping himself naked over and over, with bananas duct-taped to his nipples, with bacon stretched across his mouth, with his torso corseted in black paint. He was painting nudes, too, but his female professor pushed him toward the naked performance art. "She told me it was better than my painting," he shrugged as we leafed through his portfolio in his Brooklyn, N.Y., loft.

Aaron grew up in Nebraska, and he talks like a taciturn cowboy. A lanky 6-foot-4, he tried basketball for a year in high school but was never much good at it. Though he's shy and soft-spoken, when I asked why his work is mostly of himself, he drawled, "I'm a narcissistic, egocentric motherfucker." He then added some art-crit justification: "I was interested in that feminist thing about how a male body can be made grotesque and the guy's still admired, but the female body is always objectified. So I'm playing with that as a young man whose body can be both grotesque and, uh, sexually attractive." He pauses, embarrassed. "Well, I don't know how attractive it is, but I get turned on showing it."

I assume he's being disingenuous. Aaron may be the prettiest redneck in New York, a gen-u-wine head turner. He's 24 years old, tall, slim but broad-shouldered, with huge blue eyes, curvy lips and elegant bone structure. When he told me he wanted to do drag, I pictured a young Candice Bergen -- they have the same long, classy nose.

Aaron moved to New York last year to be an artist and maybe do some modeling. He was signed with the Wilhelmina agency for a while, "but my agent was getting 14- and 15-year-old boys fucked up on drugs and having sex with them, so he got fired." This fall, Aaron had his first homosexual experience with Tom (not his real name), who moonlights as one of the most famous drag queens in the city. I ran into Aaron a few months ago in an East Village bar and he told me he was seeing Tom, whose drag act I'd seen and admired. I asked Aaron if he was identifying as gay or bi these days. He said, "Hell no, I'm straight. I'm dating a couple of girls, too. I'm just seeing Tom casually."

At first Tom was enthusiastic about helping Aaron dress up, and both agreed to let me watch the initial transformation. But then Tom stopped returning Aaron's phone calls. I wondered if he suspected the younger Aaron would pull an (All About) Eve Harrington, clawing his way past his mentor. This seems unlikely, for, beautiful as he is, Aaron's a little short on snap and sass.

The relationship cooled, according to Aaron, when he figured out that his sexual attraction to Tom was really a desire to do drag himself. Tired of waiting around, Aaron decided to just dress himself up -- for a one-night show of his paintings at rock club CBGB on New Year's Eve. Though I'd hoped to observe the master teach the student, I invited myself along for his debut and offered to help however I could.

Aaron did his shopping at transvestite store Patricia Field, spending "way too much money." (Interestingly, tiny singer Björk spent an hour and a half in the store that day, but Aaron couldn't see what she bought, damn it.) The blizzard that hit the Northeast that weekend looked as if it might keep Aaron in Nebraska, but his plane arrived just in time for him to race home to get ready. His sister, also a former model, helped him dress quickly.

I turned up at their place around 11 p.m. The creature who opened the door was stunning but much sluttier-looking than Bergen: long platinum blond wig, heavily made up eyes and lips, black bustier with little pink breast forms escaping out the top, long shaved belly and red leather miniskirt with a wide white stripe down the front. Three big blue stars marched down the stripe, and the middle star bulged sporadically all night. Aaron's sister, understandably, wasn't much help with tucking, and the spandex underpants with the butt pads sewn in didn't do the job either.

When I arrived, Aaron was teetering on 4-inch stilettos. I knew from experience he'd be miserable if he couldn't walk, so I bossed him, "There's a foot of snow out there; for God's sake, lose the stilettos." I told him to put his cowboy boots back on, which Tom had expressly forbidden -- but Tom hadn't seen him wobbling like Bambi on the spike heels. I chipped in with some finishing touches, borrowed his mascara and then we all headed to CBGB.

In the cab, I coached Aaron to take smaller steps and speak more quietly, echoing my mother's nagging from my own gangly youth. He would try for a second but then immediately revert to his low voice and legs-spread sitting style. I walked a little behind him into CBGB to watch the reaction, which was hilariously jaded. All his friends said, "Hey, Aaron, how's it going, man?" shaking hands or hugging him without blinking. In the club, Aaron's outfit wasn't transgressive; it was just fashion.

Midnight struck and people yelled and kissed, but no magical transformation took place. Aaron kept muttering, "I need a drink, man. I need to be drunk for this to work." "What would change if you were drunk?" I asked. "I don't know, I could just get naked or something." Clearly we were straying from the most basic principles of gender illusion.

One former girlfriend did gasp when she saw him, and Aaron said with false bravado, "You like it? You wanna fuck me, baby?" Seconds later, his hand flew to his mouth and he mumbled, "Oh, my God, that just slipped out. I'm sorry." It was fascinating to watch him grab at pieces of identities like floating wreckage. He started muttering, "I gotta get out of here and into someplace where people don't know me."

He introduced me to a woman who used to live with his father when Aaron was an adolescent. The stepmom was visiting from Nebraska and confided to me that she'd been wanting to try sleeping with a woman, maybe on this trip. I suggested the three of us go to a lesbian bar a few blocks away, which I thought would be a good place for Aaron to be desired as a woman. He suggested we first stop by the drag restaurant where Tom worked, and I enthused, "Something for everybody!" It was nice to be social director and not have any sexual agenda of my own.

I herded the Nebraskans through the East Village snowdrifts and the whooping drunks in their plastic hats. The lesbian bar, the drag bar and all the dance clubs had outrageous cover charges. Aaron made a disconsolate cellphone call to Tom and got his answering machine. It was cold and late. We parked ourselves at the first free bar stools we could find, and Aaron leaned onto the bar and said in a loud, low voice, "Gimme a Bud."

Then he slumped into his seat and exhaled Marlboro smoke. "Well, this night is a bummer." It was a perfect distillation of New Year's Eve, holiday of disappointment: Aaron, flanked by me with my notebook and his former stepmother, our alcohol buzz curdled, our eye makeup smeared. I'd gotten no epiphany about drag; the stepmom hadn't muff dived; Aaron hadn't gotten to be a beautiful woman, or even a drag queen.

I gently asked how his night could have gone better, and Aaron cast about for answers. "Seeing myself as feminine in my performance art turns me on. I thought the social interaction would be more like sexual interaction, but it sure wasn't tonight." I asked if he was hoping to have sex with someone tonight. "Oh no, it's not about that, it's about flaunting."

But Aaron wasn't after the standard object-of-desire thrills. Any man who looks like he did in 21st century New York knows plenty about being desired. I wondered if he'd been a homely kid, one of those people whose self-image hasn't caught up with their blossoming. He said, "It's less that I used to be ugly than that I was shy. Dressing up as different people gives me a say in my own life."

A little later, he blurted, "I just want to do this with Tom and feel all superconfident." It struck me then that women really have come a long way. Men used to cross-dress to become more submissive, but Aaron wanted women's clothes to make him more articulate and powerful.