Myung-se Lee, a visual magician high on pictures, gives us a thriller of spooky, throbbing elegance. 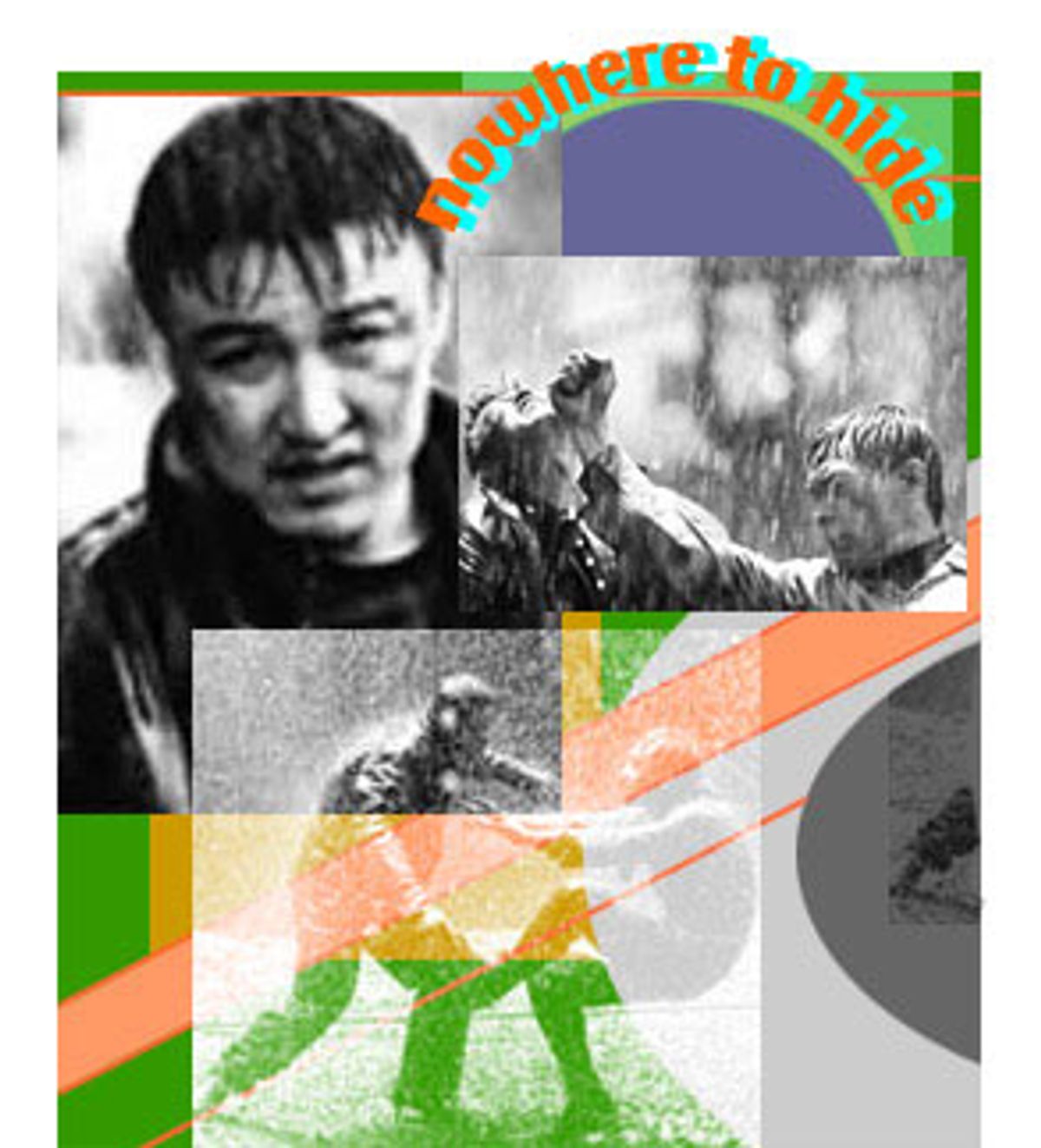 In a world where, allegedly, men like fast cars and women like to shop, Korean director Myung-se Lee's "Nowhere to Hide" is something of an oddity. As an action movie, it's a featherbrained mess: At any given time it's almost impossible to figure out what's going on, and we never find out the reason for the murder that sets the story in motion. And yet, especially in its first half, the picture is something to behold, a novelty store of ravishing and outlandish effects. Lee picks and chooses his images, his camera angles, even his film stock, with so much care that the action often takes a backseat. The cars may be fast in "Nowhere to Hide." But it's also the work of a consummate shopper.

Lee can't tell a story to save his life, but he's something of a visual magician, laying out glittering piles of goodies that you instinctively want to follow. A man is murdered, precisely and expertly, in a section of Inchon known as the 40 Steps; a thuggish, rough-and-tumble police squad, led by detectives Woo (Joong-Hoon Park) and Kim (Dong-Kun Jang), sets out to find the killer. Woo, with his gorilla gait and meaty scowl, has a reputation as a scrappy troublemaker and a loner. (Later, we see his softer side, when he dons a pair of gloves given to him by his loving and sympathetic sister, whom he can rarely bring himself to visit.)

Kim, a cartoon figure come to life with his wide, buttony eyes and mop of glossy black hair, isn't quite as tough -- he comes close to crumbling the first time he kills a man in the line of duty. But together the two make a formidable team, whether busting down doors and firing weapons willy-nilly or just hanging around in their police van, staking out villains and lazily dreaming about the bowls of steamy soup they wish they had: "Wasting time is what detectives do," Woo declares authoritatively early in the picture.

Woo and Kim's search for the killer leads them on a wayward and misshapen odyssey peopled by suspected accomplices including a bar girl named Juyon (Ji-Woo Choi) and assorted miscreants with names like Fishhead and Meathead. "Nowhere to Hide" slips easily into the category of action-comedy; it's loaded with good-natured, self-referential jibes, like chase scenes that feel as if they should be in slow motion but aren't, coming off as awkward and joyously farcical because of it.

But Lee's visual audacity, particularly his fearlessness about adding gleaming touches that just skirt the edges of being too arty, is the thing that sets "Nowhere to Hide" apart from most typical American or Asian action pictures. Lee gleefully references Quentin Tarantino and the Hong Kong films of John Woo, but he's clearly aware that those texts are well thumbed and dog-eared by now. "Nowhere to Hide" is violent, but unlike John Woo, Lee isn't obsessed with brutality as ballet, and unlike Tarantino, he strives to make sure there's meaning layered behind his artistry.

The fight scenes in "Nowhere to Hide" are so badly choreographed they read like an afterthought instead of a priority. But by the end, Lee's intent is clear: All that exhausting running, kicking, punching and grunting constitutes nothing more than a rough sawhorse on which to drape his lavish effects. With just a few choice gewgaws and couple of chiffon scarves, he's turned a toughie's lair into a boudoir.

Lee may be overtly mining the territory of Woo and Tarantino, but in the end his sensibility is closer to that of Hong Kong director Wong Kar-Wai (whose radiantly expressionistic 1994 "Chungking Express" itself channels Jean-Luc Godard). Lee has a mischievous elfin streak, a penchant for trying naughty little tricks that shouldn't work but somehow do: During that stakeout sequence mentioned earlier, when Woo and Kim wax wistful about hot soup, Lee plunks a blurry-edged surrealist vision of it in the corner of the frame, steam shimmering from its glistening surface like a wraith in a Cocteau film.

Lee isn't particularly interested in violence, and is equally lackadaisical about structure or major themes. All he wants to do is get us high on pictures, and he does a good job. In one fight sequence, Woo goes head-to-head with a burly hoodlum on a rooftop, an excuse for the pair to tango -- at one point almost literally -- against a backdrop of fluttering, color-coordinated sheets strung up on clotheslines. Later in the same sequence we see the two fighting in stark silhouette against a white wall, a shadow play that's both funny and exotically beautiful. Park's Woo has a tough-guy teddy-bear heft, and his opponent here is decidedly parka-shaped; their hefty, rounded figures bump against each other like belligerent molecules under a microscope. As their furor escalates, one uproots a TV antenna and uses it as a jousting stick, jabbing it at the other, a puppet-theater fighting tactic that's both gorgeous and goofy.

Lee poops out on the stylish effects in the second half of the movie, which is much more conventional-looking than the first, and with no story to follow (to speak of), we're left hanging, wishing for more visual dazzlers. But the duller parts of "Nowhere to Hide" fall away in the context of the picture's most stunning scene, the early murder sequence on the 40 Steps. Here, Lee goes for excess, not subtlety -- he uses 30 effects when 10 would do, but his extravagance pays off. Several killers wait in a car, watching the steps for their mark. The light around them shifts eerily, changing the hue of the bright mustard-gold dried leaves scattered near the car's tires. There's a storm coming. Lee uses a mix of stop-motion and lighting effects to show the changes in the weather, but little else moves: We're left to wait for the action.

The rain starts, beating down in bright pellets rather than drops. Through it, the victim sees his murderer at the last possible moment, but neither he nor we see the knife. He staggers and falls against the steps, polished shiny by rain; later, after the body has been removed, we see the police chalk outline vibrating in the still-torrential downpour, a wobbly line still electric from its recent contact with life. The aural backdrop Lee uses may be the weirdest feature of all: It's the Bee-Gees' somber 1967 Top 20 hit "Holiday," one of those pop songs whose lyrics may be only fake-deep but whose melancholy nonetheless hovers like a lone UFO.

The spooky, throbbing elegance of that early sequence isn't matched by anything else in "Nowhere to Hide," but it sticks with you, and it makes you wonder what feats of visual genius Lee might someday be capable of. As it is, Lee can't decide what he likes better, delicacy or bravado, and so "Nowhere to Hide" contains plenty of both -- there's an equal balance of blazing bullet holes and skittering snowflakes.

I long ago stopped automatically plunking violent movies into the testosterone pile -- I've loved the films of Sam Peckinpah too long for that. A good picture doesn't -- or shouldn't -- divide its audience into strict gender piles. But so many action films these days just seem numbingly boneheaded: Dumb fun that's far dumber than it needs to be.

That's why finding a picture like "Nowhere to Hide," even with all its flaws and messiness, is such a delight. There are very few women characters here. The ones we do get are barely sketched out and they get very little screen time. But Lee is a decidedly feminine filmmaker, and in the best way: His vision of masculinity doesn't automatically exclude beauty -- it needs it to breathe. If this really is a man's world, then it needs a woman's touch all the more. The more men we can get to learn the art of cross-dressing, the better off we'll be.