Can computerized 3-D immersion therapy cure you of your fear of flying? 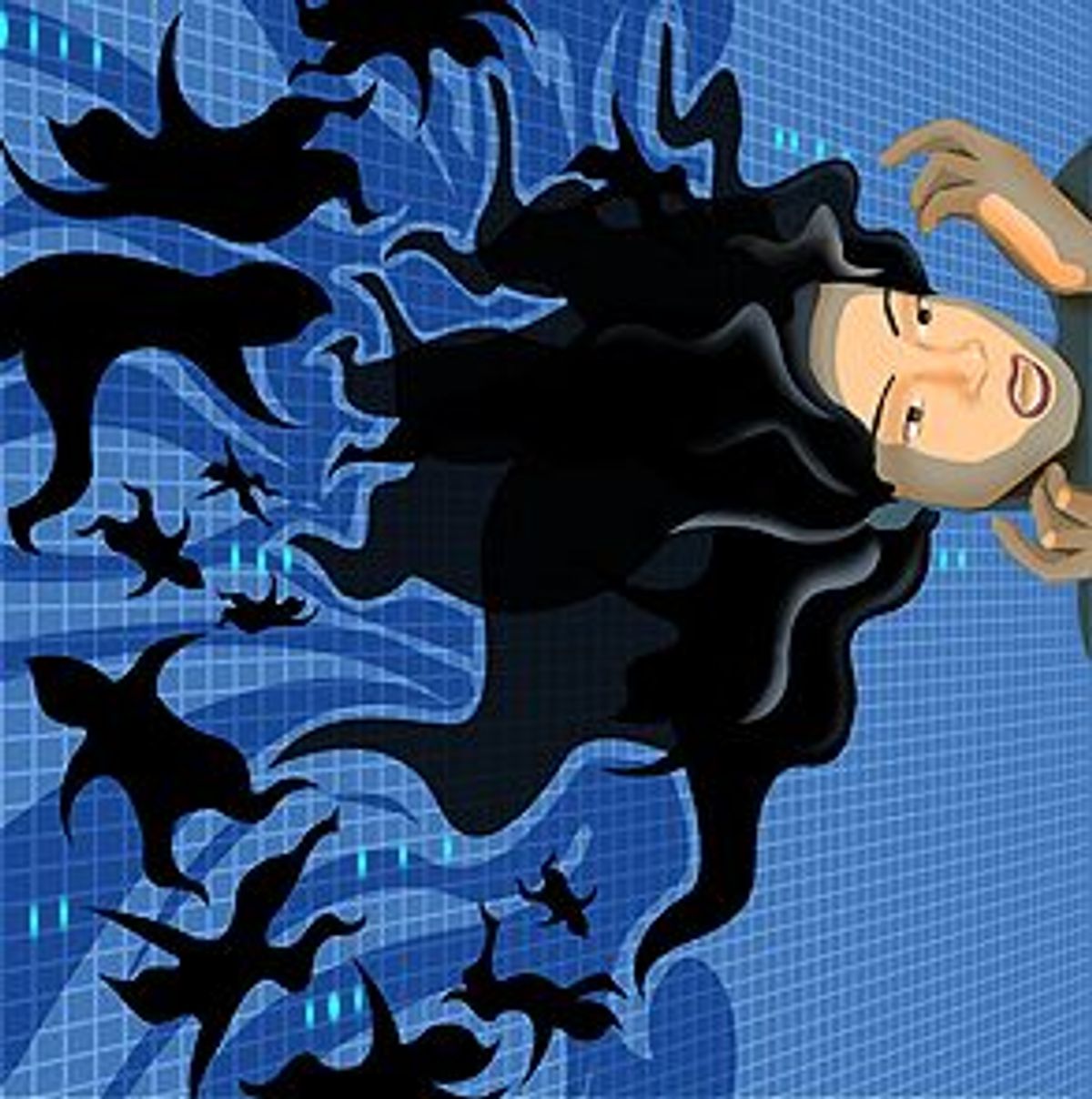 I'm experiencing schizophrenia for the first time. While spiders climb all over the room, the psychiatrist leans over his desk and shoves his face close to mine, his eyes squinty, red and evil. He keeps asking me questions, but it's impossible to pay attention. The voices won't let me. "Loser, loser, loser," screams one; "you'll never make anything of yourself," says another. A third goads me to "run, run away."

Instead of taking the voices' advice to flee, I simply stop the madness. I remove the virtual reality goggles and place them by the Apple PowerBook running the simulation. My tour is over. I don't necessarily feel more empathy for schizophrenics -- the five-minute program's goal, according to its sponsor Janssen, a pharmaceutical company -- but it's hard not to be a bit intrigued by the unexpectedness of virtual insanity.

Virtual reality's original prophets saw their technology as a holodeck of pleasure, not pain. Pioneers like Jaron Lanier and Char Davies aimed for beauty, art and emotional rapture. They created computer-generated amusement parks where people floated through objects and lost track of time. Even now, during an era when virtual reality no longer commands the regular headlines it did in the early '90s, veteran visionaries like novelist Richard Powers remain obsessed with the ecstatic promise of the unreal world.

The virtual-schizophrenia booth looks nothing like such dreams. It's a nightmare -- only the latest example of a much larger trend toward building environments that frighten rather than fascinate. Call it real therapy through virtual means: In the name of mental health, scientists are exposing people to virtual Vietnam battles, tarantulas and, for those who fear public speaking, raucous crowds. Hell on earth has been transferred to hell in a head mount. And with 20 million Americans suffering from mental problems that some therapists believe could be solved with V.R. -- now cheaper and more accessible than ever before -- many researchers believe that psychiatry will soon do what the V.R. pioneers have not, and introduce virtual reality to the masses.

"It's going to go beyond the university to private practice and to the arena of public health," says Ken Graap, CEO of VirtuallyBetter, an Atlanta company spun out of research at Georgia Tech that sells V.R. therapy tools. "This could be one of the first applications that brings low-cost V.R. to a broad base of users."

Not everyone agrees that V.R.'s technological sleight of hand is the answer to mental illness, but proponents are increasingly enthusiastic. V.R. therapy should be welcomed, they say, because it's safer and cheaper than "in vivo" options -- and because it works. Patients overcome their fears, moving on to mental health in part because they experience the computer-generated world as completely real. Isn't that what V.R. was supposed to be all about to begin with?

Virtual reality and mental health first started to merge about seven years ago. Inspired by the possibility of creating a new therapeutic and technological tool, two researchers -- Larry Hodges, a computer science professor at Georgia Tech, and Dr. Barbara Rothbaum, a psychiatry professor at Emory, joined forces. First, they built a virtual elevator shaft for use with people who have a fear of heights.

"It was a perfect problem for virtual reality to solve," says Albert Rizzo, a V.R. therapy expert who teaches at the University of Southern California's Integrated Media Systems Center and School of Gerontology. "At the time, V.R. was new and tended to work best with straight lines -- perfect for simulating heights. And all the patients require is exposure. Over time, they see that nothing bad happens, so they get over [their fear]."

Experimentation didn't stop with the fear of falling, though. Indeed, after Rothbaum and Hodges published a groundbreaking study in 1995, arguing that V.R. therapy was effective, research sprouted all over the world. In Italy, Giuseppe Riva, a communications psychologist, began using V.R. to assess neurobiological activity, such as eye movement after a stroke. Hunter Hoffman at the University of Washington's Human Interface Technology Laboratory cured a woman of her phobia of spiders in 1997 with V.R. therapy. And Rizzo -- after spending 1994 and 1995 writing papers about the potential for psychological simulations -- became a hands-on developer in the mid-'90s, beginning work on a virtual classroom in 1997 that now studies and diagnoses attention-deficit disorder. And Rothbaum and Hodges have extended their work to new areas, including Virtual Vietnam, a Huey-filled "Platoon" for veterans with post-traumatic stress disorder.

Yet, even as V.R. therapy was gaining scientific legitimacy, V.R. technology remained primitive. Experts argue that the V.R. hype of the early '90s deserves part of the blame. By the time psychiatry transformed V.R. "from an expensive toy to a useful tool," Rizzo says, users had fallen into "a trough of disillusionment" with the technology. Scientists, the press and everyday users turned off and tuned out, wanting nothing more to do with what Newsweek called "the most barfogenic invention since the tilt-a-whirl."

Crushing costs didn't help the cause either. The initial environments run by Rothbaum, Hodges, Rizzo and others ran on $250,000 Silicon Graphics workstations and often used $50,000 head mounts and tracking sensors. Even as recently as two years ago, prices remained prohibitively high, says Graap of VirtuallyBetter. The PCs needed to run a simulation cost at least $5,000 and the head-mount tracking systems cost about the same. "We didn't even bother trying to convince therapists to buy them," he says. "We only did research."

Then, about a year ago, price declines accelerated to a turning point. With the rollout of Pentium III processors, generic PCs became capable of running V.R. applications, and dropping prices for optical equipment cut head-mount costs by more than half. The result is that therapists can now start treating patients after laying out only about $3,500: $1,500 for a run-of-the-mill PC and $2,000 for a head-mount tracking combo like the VFX3D.

As is the case with most technologies, the lower prices have inspired rising interest. Janssen, for example, introduced a second virtual-schizophrenia experience this year. The company aims to demonstrate it to hundreds of doctors and law enforcement officials in an attempt to heighten their empathy for the mentally ill. And when VirtuallyBetter brought its suite of applications -- for treating the fear of heights, audiences, airplanes, storms and Vietnam -- to the American Psychological Association's conference this year, lines snaked around its booth all four days. Graap gave more than 700 demonstrations and says that more than 200 clinics have since called to inquire about buying the necessary equipment and software.

The "novelty factor" may have played a role, Graap concedes, but therapists are generally not a techno-friendly lot. Give them a couch and a patient and that's all they usually need. But the promise of V.R. has stirred them from their Freudian slumber, says Page Anderson, a therapist who has treated more than 100 patients using V.R. The technology isn't just cool, it's therapeutically compelling, she says. And it gives therapists almost complete control. They can heighten or minimize exposure to heights or other mental catalysts, repeating experiences that work, discarding those that fail. They can track eye movements and heart rates while preserving confidentiality because patients remain in the office. There are some health concerns -- Rothbaum warns that patients and therapists must not rely on technology at the expense of real-world, human interaction -- but overall, "the advantages far outweigh the disadvantages," Rizzo says.

What's more, many patients prefer V.R. therapy, which lets them simultaneously avoid and overcome their greatest fears. When Anderson started a phobia study recently, she asked 15 people whether they'd prefer real-life exposure or V.R. therapy. All but one chose the latter. "It's a new, useful tool," says Anderson. "It's a steppingstone to helping people."

But V.R. therapy is also a weak application of a revolutionary advance, says V.R. pioneer Lanier. Using immersion techniques to frighten people -- especially phobics -- requires far less idealism, innovation and passion than just about any other type of V.R. in use or imagined, he says.

Graap admits that phobics are already "programmed" to react. And Janssen's hallucination-filled schizophrenia program doesn't just increase empathy; it also advertises the company's latest schizophrenia medication in bold letters at both the beginning and the end.

Of course, the push toward fear and marketing in virtual reality "shouldn't come as a surprise," Lanier says. "Our art and culture are always trying to evoke primal fears."

But the trend remains disappointing to Lanier -- a sign, he says, of "our society's weird take on life right now, where our higher priority is coming up with some way to deal with our primal fears, instead of a way to improve life and art. Maybe it's the cult of victimhood, but what a curious priority to set."

Perhaps there's room for V.R. therapy and the aesthetics that Lanier longs for to coexist. Anderson and Graap contend that V.R. therapy may not be the escape that its pioneers initially envisioned, and that their applications represent a transition. The virtual-schizophrenia booth may not feel real to people without the disease -- I sure wasn't all that impressed -- but the sweats and high heart rates of phobics show that full psychological immersion is possible. With ever-improving technologies, the lessons learned in therapy -- about what works and what doesn't, for example -- could open up new avenues of V.R. research and reveal new models for immersion. Soon, people may be helping themselves to over-the-counter V.R. devices at pharmacies while the dreamers and pioneers code cultural epiphanies that reach the masses. With the mix of psychology and more advanced, cheaper processing power, "the sky's the limit," Rizzo says. "The only limitation is software. Whatever we can code, we'll be able to do."