Linda Chavez's "charity" to an illegal Guatemalan immigrant may cost her a Cabinet post. Her critics say it's the only nice thing she's ever done for Latinos. 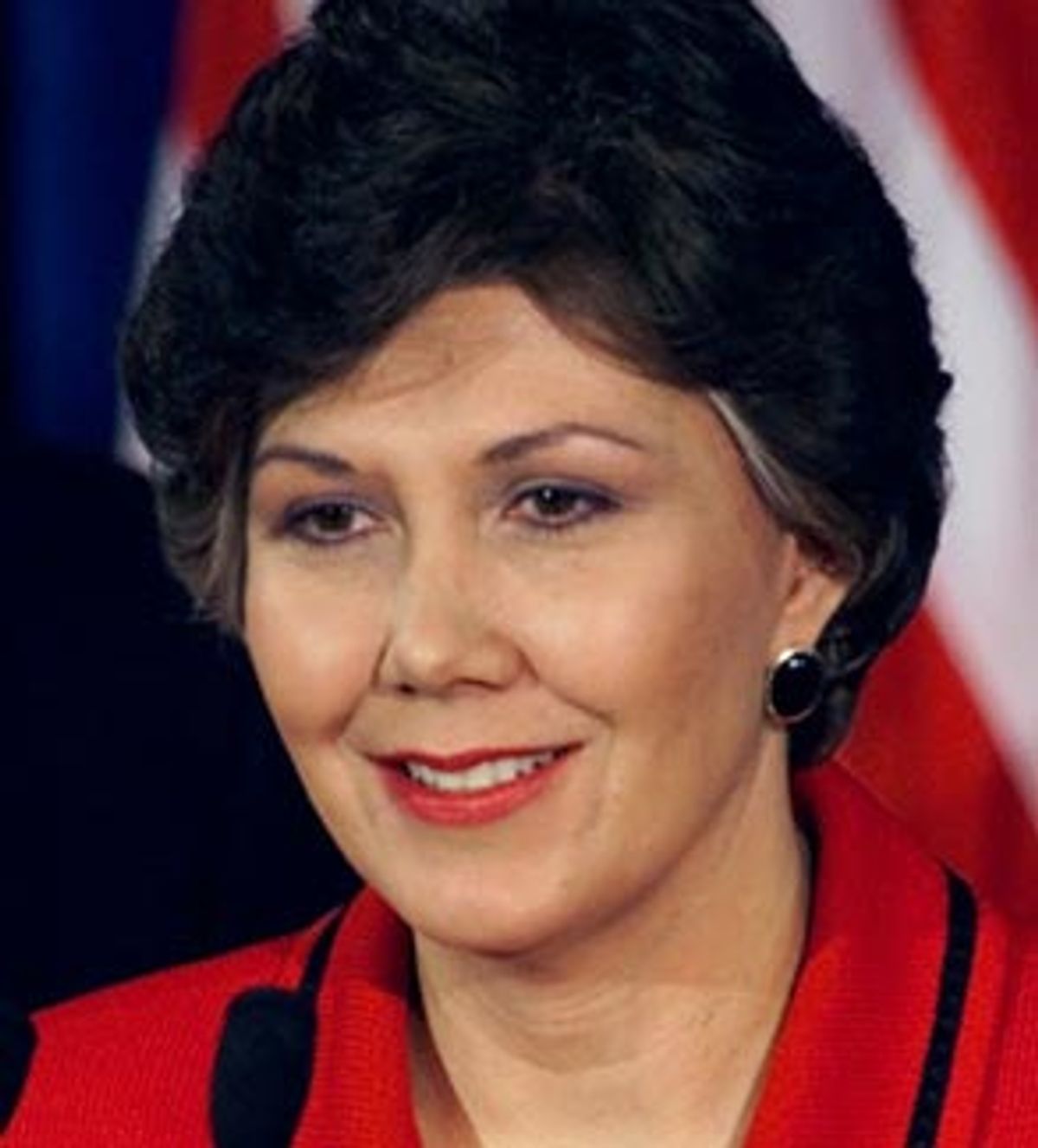 It's ironic that Linda Chavez, President-elect George W. Bush's pick to head the Department of Labor, should find her nomination jeopardized by her relationship with Marta Mercado, an illegal Guatemalan immigrant who lived with Chavez in 1991. Much of the controversy over the relationship centers around whether Mercado was an employee of Chavez's, or a charity case.

If Chavez considered Mercado an employee, her failure to pay Social Security taxes could sink her nomination, as it did for Zoë Baird, the one-time Clinton choice for attorney general in 1993. Either way, if Chavez knew that Mercado was an illegal immigrant and sheltered her nonetheless -- something Chavez denies, despite Mercado's words to the contrary -- she would have been violating the law.

Still, Chavez's action, even if it was illegal, could be defended as a brave and risky act of charity, and of solidarity with a fellow Latina in a time of need. Yet many Hispanic leaders see Chavez as a "professional Latina" who has continually bashed her own ethnic group to curry favor with conservatives. And while she's relatively moderate on immigration issues, making her "charity" to Mercado at least intellectually consistent, she's been brutal to certain Latino groups, especially Puerto Ricans, whom she described in a 1991 book as "well versed in public assistance" and lacking a work ethic.

"There's more concern than support within the Hispanic community for Chavez," said Rep. Silvestre Reyes, D-Texas, incoming chair of the Congressional Hispanic Caucus. "As more of the information gets out about her positions, that concern has grown." Marisa Demeo of the Mexican American Legal Defense and Educational Fund, the Hispanic equivalent of the NAACP, agrees. "Since the time of her nomination," Demeo says, "we have continued to learn about all sorts of positions that she's taken -- against the Family and Medical Leave Act, against affirmative action and bilingual education -- that are not good for our citizens."

Some advocates said that the Chavez choice proves that Bush is either tone-deaf to Latino concerns or doesn't realize the bad feelings that Chavez has inspired in the community. "This is definitely an 'in your face' nomination," said Lisa Navarrete, spokeswoman for the National Council of La Raza, a Hispanic advocacy organization. Navarrete, who went out of her way to praise Chavez's intelligence and power as a writer, said that Bush was way off base if he thought that the nomination would get him diversity points with Hispanic voters. "The point of having a diverse Cabinet is to have someone who represents the views of that community," she said. "But Chavez has made a career of saying, 'I'm opposed to what most Latinos think and want.'"

"She gives cover to Republicans who believe that the only way for Hispanics to help themselves up by their own bootstraps is to cut them off at the knees," says Brent Wilkes, national executive director of the League of United Latin American Citizens.

But people who want to cut off Chavez's chances at the knees, Wilkes claims, have a powerful sword: Chavez's own words. "The good thing from our perspective, and maybe the bad thing for her," Wilkes says, "is that she has a lot of written stuff that will backfire on her."

Along with Chavez's commentaries and editorials, Wilkes cites her 1991 book "Out of the Barrio: Toward a New Politics of Hispanic Assimilation." In it, Chavez bashes the Hispanic political establishment for holding its citizens back. "Their leaders," she writes, "seem more intent on vying with blacks for permanent victim status than on seeking recognition for genuine progress by Hispanics over the last three decades."

Chavez spends much of the book blaming Hispanic leaders for inviting white bigotry by emphasizing their ethnic identity over their status as American citizens, and demanding what Chavez considers inappropriate remedies conceived during the civil rights movement. "Hispanic organizations that insist on special benefits ... severely strain the comity of the American public."

Yet the book, which is unrelentingly critical of Hispanic leaders, waffles between praising middle-class Hispanics and disdaining those in lower classes as a major public relations drag. "The success of middle-class Hispanics is an untold -- and misunderstood -- story, perhaps least appreciated by Hispanic advocates whose interest is in promoting the view that Latinos cannot make it in this society," she writes. "The Hispanic poor, who constitute only about one-fourth of the Hispanic population, are visible to all."

Though Chavez points out that poor immigrants lower the socioeconomic statistics of the Hispanic population as a whole, she refrains from any hint of immigrant-bashing. For example, speaking of the low educational attainments of newly arrived Mexican immigrants, Chavez writes, "Nonetheless, even these poorly educated immigrants will make progress as they stay longer in the United States."

Chavez is toughest on Puerto Ricans, devoting a whole chapter to what she calls "The Puerto Rican Exception."

"Puerto Ricans appear to be the one Hispanic group that truly fits the model of a permanently disadvantaged group, indeed one that is developing a sizable underclass," Chavez writes. Though she supports that assertion with statistics about welfare dependency and out-of-wedlock births, the anti-Puerto Rican sentiments Chavez voices frequently border on the irrational.

In this chapter, Chavez depends on some creative use of statistics. For example, though she acknowledges that not all Puerto Ricans live in New York, Chavez repeatedly returns to those mean streets to make her sweeping generalizations about the population stick. Information about the high poverty rates of Hispanic New Yorkers are blamed on Puerto Ricans, while Latino achievement in that city happens in spite of Puerto Rican influence.

The group is described as lacking a work ethic, as "neither working nor looking for work." Though Chavez has employment data that shows Puerto Ricans have higher unemployment than other Hispanic groups, charges that they don't look for work would be difficult to prove, and Chavez doesn't. She also says that Puerto Ricans are "well versed in public assistance" and "welfare has supplanted the family network of support for much of New York's Puerto Rican community." At one point, Chavez compares "the vibrant commercial areas of Dominicans, Colombians, Cubans, and Mexicans" in New York to the Puerto Rican "streets of the South Bronx ... filled with men and women whose bearing suggested they had no place to go." Not exactly cutting-edge social science.

These anti-Puerto Rican sentiments stand in stark contrast to at least one episode in Chavez's personal life. Chavez's defenders in the Bush camp cite her help of Ada Iturrino, a Puerto Rican single mother, as proof that she regularly reaches out to those less fortunate. Though Iturrino did not return calls from Salon, she did rave to the New York Times about how Chavez took in her two children for the summer several years ago as part of the Fresh Air Fund, a program that gives inner-city kids a country vacation. Chavez also paid the private-school tuition for Iturrino's kids, and continues to serve as a mentor and trusted family friend.

Though Chavez might be good for the Iturrinos' education, her vocal opposition to bilingual school programs shows her lack of concern for Latino education as a whole, according to Wilkes. She once headed U.S. English, a group that campaigned to make English the official U.S. language and has stridently opposed bilingual programs. "They left U.S. English out of her official bio," Wilkes notes. "Did you notice that?"

Perhaps that's because the group's goals are out of step with Bush's "compassionate conservative" sentiments. "Many times, English-only programs send a signal that says 'me, not you,'" Bush once said. He also voiced support for limited bilingual education. "If a good bilingual program effectively teaches children to read and comprehend English as quickly as possible, I say great."

Chavez, however, has had little good to say about bilingual education under any circumstances, and wrote in her book that such programs were just another form of self-ghettoization by Hispanic liberals. "Bilingual education is promoted on the theory that indigenous Hispanics have the right to maintain their ancestral language and culture."

But Chavez resigned as executive director of U.S. English after she learned that one of its major contributors had advocated forced sterilization, among other things, as a way of controlling the growing immigrant population. In "Out of the Barrio," Chavez describes as "anti-Hispanic" a 1986 memo in which U.S. English founder John Tanton questioned the "educability" of Latino immigrants.

As she does frequently in her book, however, Chavez returns to blaming Hispanic community activists for bringing Tanton's brand of bigotry on themselves. "What Hispanic leaders would not entertain," Chavez wrote, "was the possibility that their own actions and rhetoric were spreading fear faster than anything U.S. English could possibly do."

Even her critics in the Hispanic community see bright spots in Chavez's record: her support of legal immigration, and her refusal to make illegal immigrants the focus of her attacks. "She's pretty moderate on immigration issues," says Larry Gonzalez, Washington director of the National Association of Latino Elected and Appointed Officials, one of the few groups that Chavez singles out for qualified praise in her book. Navarrete concurs -- though she insists that virtue won't do much good at Labor.