Things were going tear-jerkingly well at Linda Chavez's news conference. Then she opened her mouth. 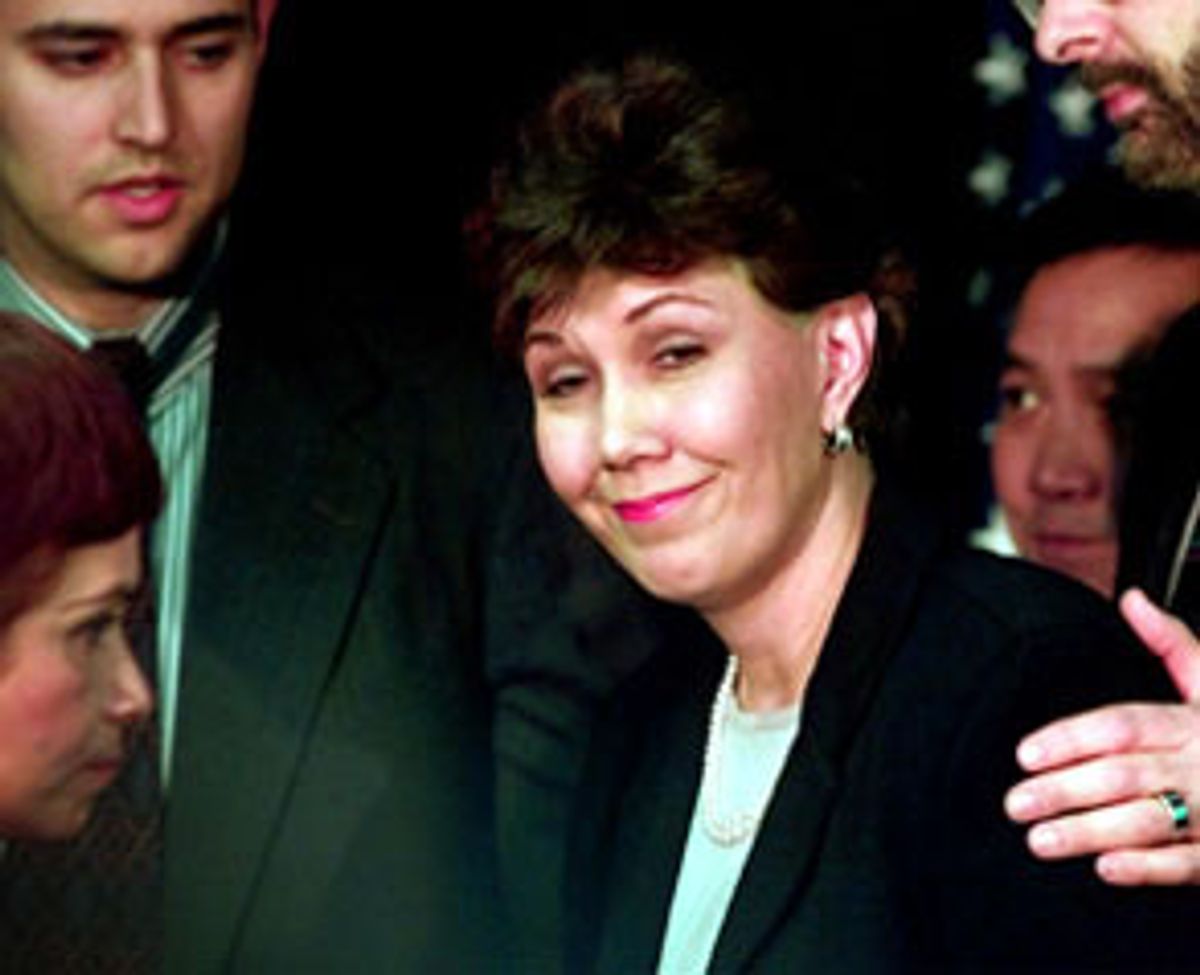 It would have been hard for Linda Chavez to live up to the recent good-loser standard set by Vice President Al Gore, but as she withdrew from consideration for the labor secretary position, she didn't even come close. "I believe that I would have made a great secretary of labor," she said, but decided to call it quits because she was "becoming a distraction."

Chavez's farewell press conference ranged from inspirational to self-pitying, and ended in a flurry of half-answered questions, the very same ones that sank her nomination. The event featured Chavez's best advocates, people who were the beneficiaries of what President-elect George W. Bush's team has called Chavez's acts of compassion. But their simple eloquence was undermined by Chavez's worst advocate: herself.

Stepping out to the podium at about 4:15 p.m. EST, Chavez looked weary but unbroken, and spoke in a tone of quiet defiance about her relationship with Marta Mercado, the Guatemalan immigrant Chavez housed in the early '90s. "Knowing everything that has happened over the last week, if that woman showed up at my door," Chavez said, "I would do it in an instant and without hesitation."

She explained that her assistance to Mercado was part of her life's work of helping those in need. "I didn't have an easy life, growing up," Chavez declared. She then listed a series of her childhood tribulations that had been ameliorated by the kindness of family and friends. It was the memory of that kindness that, according to Chavez, inspired her to extend a charitable hand throughout her adult life. "I vowed to myself that, no matter what happened to me in my life, I would be there for other people," she said. "And I tried to do that."

To prove it, Chavez brought along a handful of those who had benefited from her personal generosity in the past. They included the soft-spoken Margarita Valladares, a tiny woman who nearly disappeared behind the lectern, and whose voice trembled as she spoke of how Chavez encouraged her to learn English, go to school and improve her life.

Then came Benson Bui, a Vietnamese immigrant who came to the United States in 1979 with nothing, and eventually earned a post at the Justice Department with Chavez's help. "If I don't have Linda Chavez to help me," Bui said, "I don't have anything I have today."

Finally, Ada Iturrino, the Puerto Rican single mom whose children spent part of the summer with the Chavez family, took up the chorus of gratitude. On Sunday and Monday, when it looked like Chavez might ride out her difficulties, Iturrino had gone public, talking about Chavez paying her children's private-school tuition and how she had taken an active interest in their education and development.

"She's been very helpful in my life," Iturrino said. But that wasn't nearly as affecting as the words of Iturrino's children, the rambling teenager, Joshua, who described Chavez as "very loving," and the younger Celenia who said, "I love Linda very much. She's been a second mother for me."

It was all going so well. Chavez was emerging as a closet compassionate conservative whose political career was going down the tubes over a simple act of kindness. But then, Chavez started defending herself.

First, Chavez had to toot her own horn, finishing the list of her own good works by telling reporters about how she saved the fiancée of an American citizen who was being deported to Mexico on a technicality. Though it seemed that Chavez had served as a fairy godmother for the couple, hearing the story from her own mouth made it sound self-congratulatory. Chavez seemed to sense it herself, and repeatedly reminded the audience that the lucky man, David Boden, was flying in and could step into the room at any moment to tell the tale himself.

From there, it went straight downhill. Chavez could have used the difficult moment to make a point about America's byzantine immigration laws, or gracefully say, "Mistakes were made," leaving everyone to mourn her untimely demise and praise her self-sacrifice on Bush's behalf.

But that's not what Chavez did. Instead, she loudly declared her own martyrdom, and, President Clinton style, sidestepped the part she played in her unraveling nomination. "I think that what has happened over the last few days is quite typical of what happens in Washington, D.C., and unfortunately is quite typical of what has happened in politics in America today," she said. The ultimate culprit, Chavez said, was "the politics of personal destruction."

Chavez went on to say that she had been the victim of a "search-and-destroy" mission hatched by a hostile press. In the ultimate act of chutzpah, Chavez expressed belated sympathy for Zoë Baird, the woman whose nanny problem killed her chance to head the Justice Department in 1993. "I do believe that Zoë Baird was treated unfairly," she said.

That was rich. Chavez herself had jumped on the Baird-bashing bandwagon in 1993, and voiced no puzzlement about why that nomination sank at the time. Chavez remarked that Baird's failure to pay Social Security taxes for an employee was only a secondary sin. "I think most of the American people were upset ... that she hired an illegal alien," she said. Even in the last two days, Chavez had taken pains to point out the differences between her case and that of Baird, claiming that Mercado was never an employee. Until the end, Chavez maintained that for two years, Mercado was just a houseguest who occasionally did chores and then occasionally received an unrelated sum of spending money.

The only mistake Chavez would admit to in the Mercado matter was naiveté. "I made the mistake of not thinking through that this might be misinterpreted," she said. That was also hard to swallow given her own statements about Baird, and what she later confessed was an active decision not to tell the Bush Cabinet-makers about the Mercado decision upfront.

Furthermore, the velocity of Chavez's fall was caused by an undertow of deception in her Mercado story. The FBI had reportedly begun investigating whether Chavez had asked a neighbor to stay silent about Mercado's living arrangements and employment during any confirmation questioning.

Chavez also changed her story about what she knew and when she knew it regarding Mercado's immigration status. Earlier in the week, Chavez claimed that she found out that Mercado had been in America illegally as late as 1993, more than a year after. At Tuesday's press conference, however, Chavez said, "I believe I always knew that she was here illegally."

The Bush transition team, however, spent at least a few days in the dark. During the press conference, Chavez admitted that "I did not volunteer" information about Mercado until after Bush initially asked her to be labor chief. Chavez also didn't want to volunteer the exact lag time between her Cabinet discussions and her disclosure about Mercado, but said that it was "less than a week." However, a source within Bush's transition office was more specific, explaining that they learned of the Mercado situation at about the same time America did, during Sunday morning talk shows.

That could explain why the official Bush instant-response to Chavez's withdrawal was quick and to the the point. "Linda is a good person, with a great deal of compassion for people from all walks of life. Her upbringing and her life's work prepared her well for the issues facing the Labor Department," a Bush statement read. "I am disappointed that Linda Chavez will not become our nation's next Secretary of Labor."

Bush never mentioned "the politics of personal destruction" in the Chavez nomination, a phrase he used frequently himself during the campaign when touchy legal questions came up. Just an hour after the press conference ended, the Bush team was already putting Chavez behind it, and a member of Bush's media team declined to discuss Chavez's reasons for quitting, saying "She speaks for herself now."