What are we fighting for? 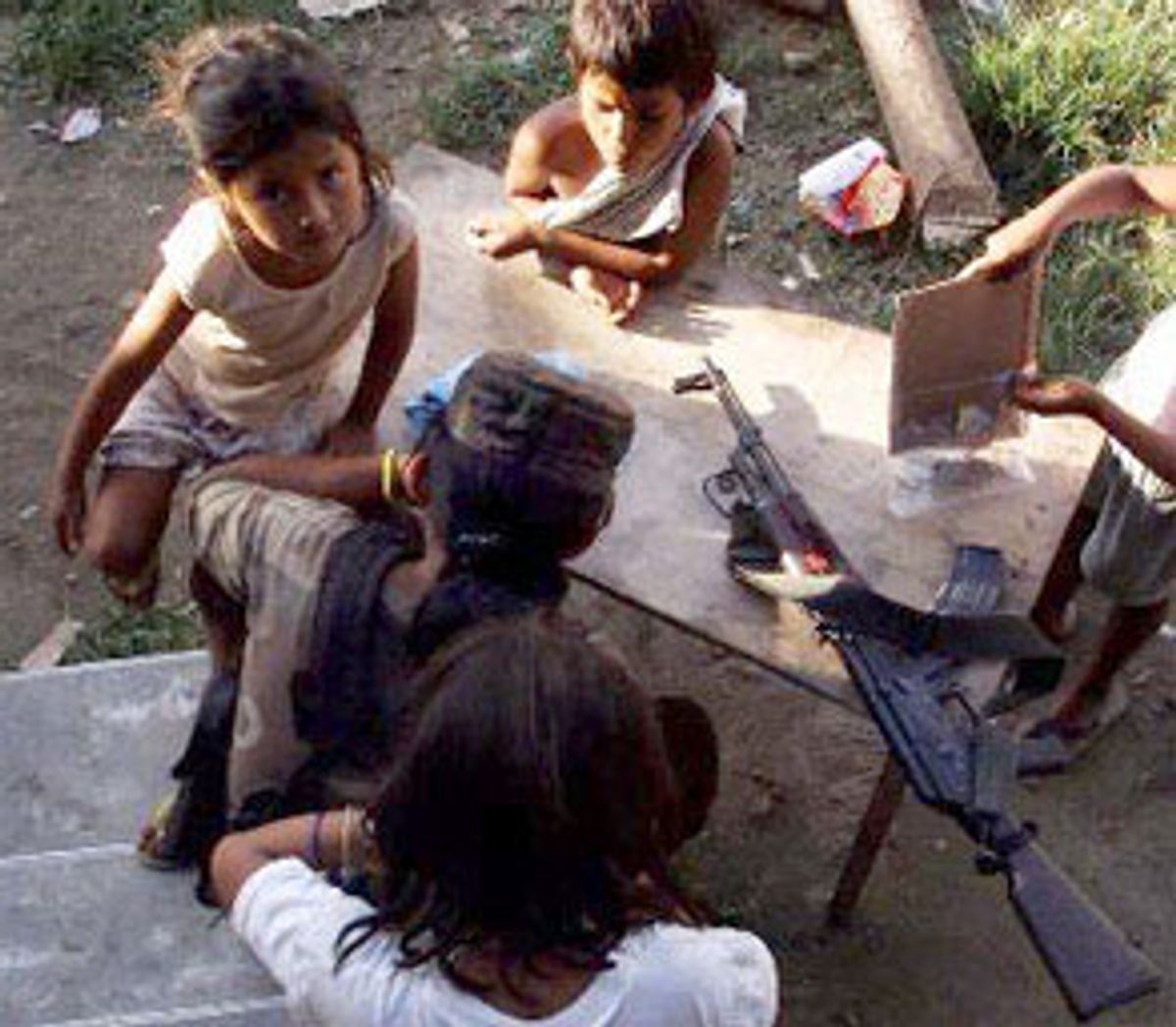 When they came to recruit Ana, they told her she wouldn't have to work and that she could see her mom and her grandmother whenever she wanted. Instead, leftist guerrillas taught the 13-year-old girl how to kill and marched her off to fight in the mountains of northern Colombia, where she nearly starved before surrendering.

"I was aware that on any day I could die, or that I might get hurt," said Ana (not her real name). "But I didn't cry once during the fighting."

It has long been known that the numerous armed factions in the Andean nation's 36-year civil conflict have used children to fight their battles, but the stories that Ana and others like her tell about their defeated guerrilla column -- part of the Revolutionary Armed Forces of Colombia, known as FARC -- reveal that the problem is worse than anyone thought.

In a series of skirmishes that began in November, 128 guerrillas enlisted in the so-called Arturo Ruiz Column have either surrendered or been captured by the Colombian army, while an additional 63 -- including 27 children -- have been killed. The approximately 170 insurgents who survived the pummeling are now surrounded and being worn down by at least 1,000 soldiers, who are reveling in their lopsided victory after a series of bruising defeats suffered by the army in other parts of the country.

"From the stats coming out of this event, we've gathered that 46 percent of the original group were children," said Carol De Rooy, director of the UNICEF office in Colombia. "If this sample is realistic, we are grossly underestimating the number of children in this armed conflict. Either that, or they're putting the kids out on the front lines, which is just as bad."

The use of children in combat isn't a problem unique to Colombia: Some 300,000 kids under age 18 are fighting in armed conflicts throughout the world. But the probability that Colombia's factions have bumped up recruitment of children is particularly worrying here, where peace talks are on the brink of collapse and fighting is expected to intensify.

Beginning this month, Colombian counternarcotics troops -- trained and equipped through a $1.3 billion aid package from the United States -- are expected to push into the rebel-controlled southern state of Putumayo, which produces most of the country's cocaine, to destroy coca crops and drug labs. Since the 15,000-strong FARC bankrolls its insurgency partly by protecting peasant-owned drug crops and labs and then charging millions of dollars a year for its services, both Colombian and U.S officials expect heavy resistance from the guerrillas.

For the poor village children who constitute the majority of the youngest recruits to FARC, promises of glory, adventure and a paycheck are often irresistible. Most of them, though, end up shuttling messages between isolated rebel groups or trudging through the dense countryside, alternately attacking and running from better-trained and better-fed army and right-wing paramilitary fighters.

According to the army and human rights groups, most of the 6,000 children believed to be fighting in Colombia's civil war are members of FARC, which has been trying to topple the Colombian government since the '60s, under the direction of its aging founder, Manuel "Sureshot" Marulanda.

Children also are recruited by the nation's smaller, leftist National Liberation Army, or ELN, and the right-wing paramilitary groups bent on destroying the guerrillas. The government once staffed its military offices with teenagers, but phased out the last of them in 1999. The number of children killed each year in combat here is unknown.

"The violence they see isn't easy to forget," said Nelson Ortiz, a psychologist with UNICEF in Colombia. "War is hard enough for adults, but imagine how it is for children, who don't have the experience or the development to deal with what they've seen and done."

Ana's experience began in July, when she met two FARC fighters outside her school in the southern village of Puerto Concordia, part of a Switzerland-sized swath of territory ceded to the rebels two years ago by President Andrés Pastrana as an incentive to begin peace talks. Most Colombians believe the rebels are misusing this safe haven to, among other activities, recruit combatants. Based on the stories of the 57 children captured from Ana's column, they appear to be right: All but four were recruited from FARC's southern stronghold, said army Maj. William Ardila-Pena.

The two recruiters told Ana that if she joined, she'd have plenty of time to study and wouldn't have to help her mom and her grandmother with housework. That sounded good, so she said yes. But after talking it over with a friend, she changed her mind.

"When they returned for me, I told them I didn't want to go, but they said that I had already said yes and that I had to go," said Ana during an interview on Dec. 19 in the northern city of Bucaramanga, two days after she surrendered. "So they took me, and since then I haven't seen my mom or anyone else from my home."

The rebels brought her to a clandestine jungle camp for training. Her commanders woke her up every morning at 4 for an hour of exercise followed by breakfast and combat training, where she learned how to ambush army soldiers and paramilitary troops and assemble and fire an AK-47. After dinner, she had to listen to an hourlong lecture on Marxist-Leninist theory, followed by bedtime at 8 p.m.

"We couldn't make any noise," said Ana. "I never told them I didn't want to be a guerrilla because someone told me that saying that is dangerous. Even if you don't want to be there, you have to show a happy face and a revolutionary spirit."

Twenty days after her training began, Ana was sent on a long hike with hundreds of other combatants to reinforce another FARC column to the north. In late November, some 200 miles into their journey and 8,000 feet up in the mountains of North Santander state, they were unexpectedly surrounded by army soldiers who had been tipped off by a rebel deserter.

Severely outnumbered and outgunned, the column quickly unraveled. The combatants ran out of rice and salted meat and lived on water for days. Ana traded fire with soldiers and once shot at an army helicopter that was attacking her camp, but for most of the fighting she ran for cover and didn't emerge until things quieted down.

During one skirmish, she lost the blankets she slept under and thereafter had no protection from insects and the cold. The brutal conditions left their mark: During the interview Ana's lips were cracked and blistered and her lanky arms and legs were covered with bug bites.

While the defeat of the Arturo Ruiz Column has been a welcome victory for the army, which in October lost 22 men when rebels downed the U.S.-built Black Hawk helicopter they were being carried on, it has also further damaged FARC's reputation among Colombians -- many of whom are convinced the rebels have devolved from idealistic revolutionaries into a band of thugs.

While FARC leaders have yet to respond to charges that they've stepped up recruitment of children, De Rooy said that FARC commanders promised during a meeting last year to stop enlisting children younger than 15. He hopes to meet with rebel commanders soon to persuade them to demobilize children from their columns.

Hours after Ana surrendered, the army allowed a television news crew to interview her and two other kids who had deserted. With her back to the camera, Ana began to cry for perhaps the first time in months, begging her mom to forgive her for what she had done. The next day she was turned over to caseworkers at the Family Welfare Institute.

Since the guerrillas could try to recruit her again -- or worse -- if she returns to Puerto Concordia, Ana may have to spend the rest of her childhood under the protection of the state, which doesn't seem to bother her. It won't be the adventurous life the guerrillas promised her, but at least she will have food and a warm bed.

Michael Easterbrook is a freelance writer in Brooklyn.