Portrait of an artist

Trevor Fairbrother's new book shows that John Singer Sargent was not only a painter of the rich but a sensualist in everything he did. 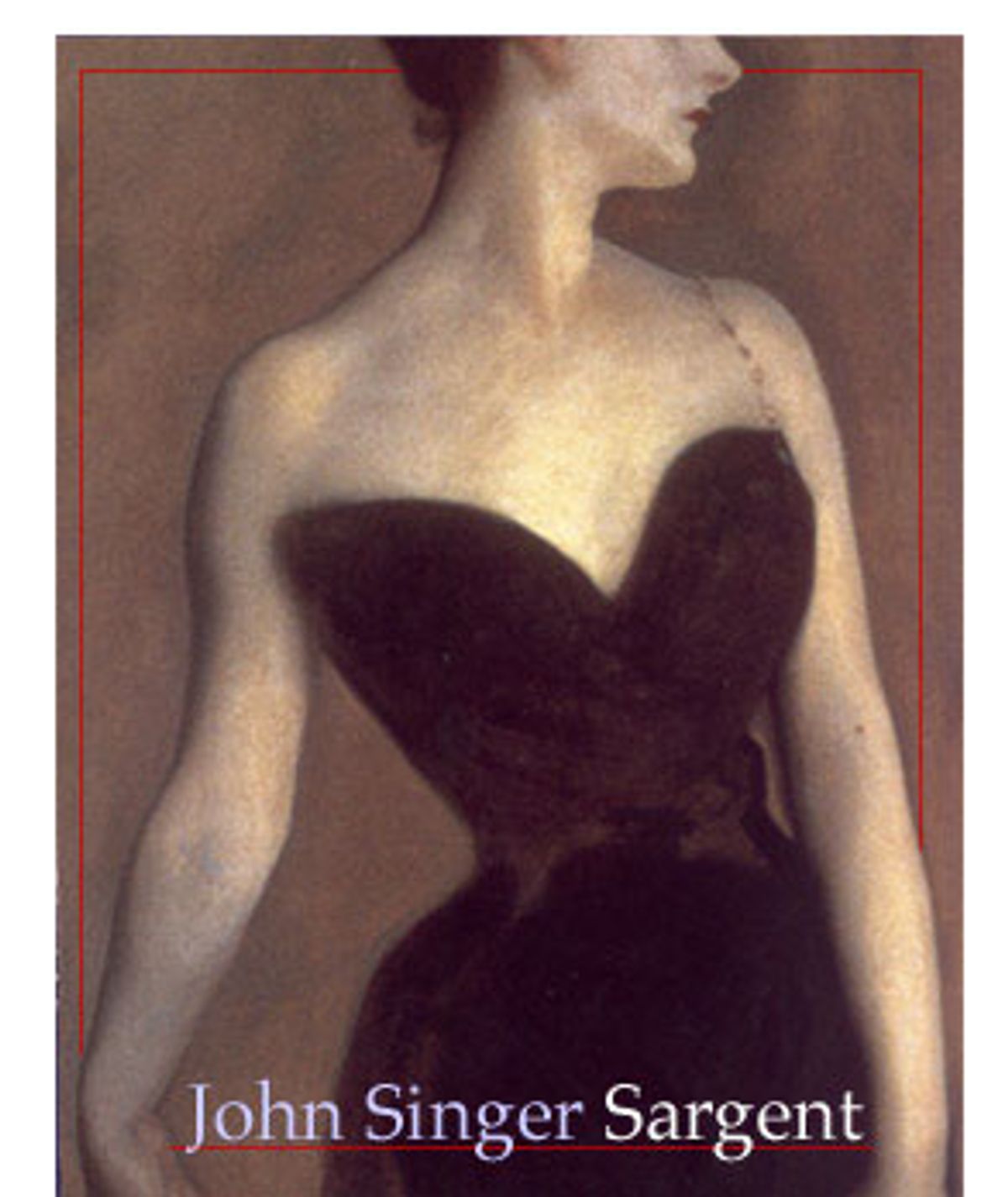 Americans don't quite know how to appreciate their artists -- especially when their work is sexy. Think about all the controversy that surrounded Robert Mapplethorpe's elegantly explicit photographs. To look back a century, esteemed portrait painter John Singer Sargent faced similar public outcry over a painting of a pale statuesque beauty, "Madame X," whose gown strap brazenly slipped down her shapely shoulder. Yet Sargent, an American who lived most of his life in Europe, somehow is remembered as a detached observer of the stiff, late-19th century upper class.

Curator Trevor Fairbrother, a longtime Sargent scholar, has undertaken a welcome project of infusing the dry realm of art history with glamour and eroticism with "John Singer Sargent: The Sensualist." In this sumptuous book, which accompanies an exhibition at the Seattle Art Museum (through March 18), Fairbrother shifts the view of Sargent as a technically accomplished yet clinical artist to someone who very much appreciated physical pleasures and captured them in lush, ravishing paintings and drawings.

The project offers in-depth looks at graciously large pictures such as the iconic "Madame X" and a more intimately scaled, little-seen portfolio of 30 drawings of strapping male nudes -- presented publicly in their entirety for the first time in the book and exhibition. They're languorous images that unabashedly adore alluring bodies and settings.

In a nutshell, what's different about this look at Sargent?

What I've done with this book is reveal the contradictions of Sargent's official biography. It's generally understood that he was reserved and shy and tongue-tied and kind of a blank as a sexual being. Yet when we talk about his painting we refer to it as uninhibited and lush and sensual and expressive of an enjoyment of body language, texture and sunlight.

Have you revised your impression of Sargent, the person, after doing this project?

I would argue -- though people may contest what constitutes evidence -- that he was probably gay and very repressed. He led a double life, a public facade vs. the real person. The real person is hidden, as those who really knew were sworn to secrecy, sort of the way Hollywood still is today.

Within the field of art history is that an important revelation?

I personally think it's a footnote. But all these people who carefully avoided the topic feel they have to comment on it in some way. It's a transition to a broader awareness of what's there in the art.

It seems slightly dangerous to couch such a revered artist's work in sexual terms.

When I wrote the first article on the male nudes, it was so obvious to some people that there's an admiration for the male body in there. But then most weren't used to hearing about that 20 years ago. I don't want to label him a gay artist. He never wrote about it. I think it's a positive attribute of the work that he clearly enjoyed the male body. It's not unlike the way Picasso and Matisse enjoyed the female body -- and there's no shortage of literature about their enjoyment of that. But there's almost nothing written about Sargent's enjoyment of the male body. In Robert Hughes' review of the Sargent show at the National Gallery, he wrote that Sargent never painted a nude, male or female. Not true -- he did both! Hughes was speaking to the general understanding that Sargent was asexual. I'm just trying to add one more thing to the table, and I'm doing it more because I think the works are wonderful and worth looking at. But if that's the only thing keeping us looking at the artwork, that's terrible.

There is an interesting way in which artists can deal with nudes in a socially acceptable way. It's almost as if they're like doctors and aren't supposed to enjoy looking at naked people.

When you see the portfolio together, you can see what he liked to draw about the male form. He obviously liked to draw a certain type of well-built Italian men and [to pose them in strong, torqued and twisted poses. He set up poses that are actually fairly difficult to draw, and then made them look quick and effortless. He liked the challenge; he was a bit of a showoff in that sense.

Do you think he really enjoyed the act of painting?

Very much so! I don't really care what he did in bed, if anything. It could well be that painting was his ultimate pleasure. It was a visual thing.

You also write in the book that Sargent was a large man with a big appetite. There's a quote from someone who said, "He could put away more food at a sitting than any man in London."

If you read one of those things it's easy to ignore, that's just one dinner, but when you find numerous sources, you figure it has to be true. He must have been the kind of person who loved food and couldn't wait for the next meal. Maybe he ate compulsively because he was nervous. It's complicated.

Let's talk about the infamous "Madame X." When it was painted in 1884 it was scandalous. One, because the strap is slipping down her shoulder, but also because it was perceived as a scathing critique of a social class. Was it?

It's one of those amazing pictures -- more than the artist or the sitter could have known. Sargent was growing fast in his career and pushing the envelope at the Paris Salon. She was at the height of her social career as a beauty, commissioning gowns that showed her off. The complicity of the two of them -- this great painter painting this beautiful woman in a sexy dress -- added up to something. He went to her to do that picture. That's his fantasy of wanting to turn her into a Sargent painting. Yet it became an object of ridicule -- there were crowds of people standing in front of the picture laughing. She, Madame X, got hurt because she thought they were laughing at her.

Why were they laughing?

I think because she's so arrogant. It's not a conventional portrait. She's looking away from you, not at you -- she's so haughty! And the gown is so revealing. It seems like nothing these days, but then it was very daring. It's very severe in terms of composition. He turned her into this iconic figure, there for you to adore, who is totally ignoring you. But it's also possible to look at it and think, My God, how vain that someone would want to be painted dressed like that, with all that makeup, to get all that attention. That's the interesting thing about the picture -- it's probably much more innocent than all the reasons we could think of how it might offend.

Why do you think the painting is still so popular?

It's almost like she's Audrey Hepburn in the little black dress. It's a very couture picture. Cecil Beaton did a drawing of it in a book about fashion. It has become an icon of the black dress and a striking silhouette.

What about the painting of dashing Doctor Pozzi wearing a blood-red dressing gown? In the book you say there's evidence that he had entanglements with his patients. Was Sargent attracted to flamboyant characters?

Obviously Sargent found him to be an amazing persona. He actually calls him a "creature" in a letter of introduction to Henry James. Doctor Pozzi and Madame X are the male/female versions of the same thing. They're both peacock figures. Sargent was mesmerized by people who could be so theatrical and glamorous. And maybe it's a psychological thing -- if he is the shy, repressed type who's drawn to extroverts, he uses his art to express those passions.

Sargent is famous for his portraits, but in the book, you point out that he also concentrated on lush and exotic settings. There's definitely something sensual about the painting of two people lounging in a field on the book's cover. Was it kind of a summer vacation image?

I love that picture. It's called "The Chess Game" and you could read it as some kind of pictorialist homage to harem imagery. But it's totally fabricated. The man in the painting is Sargent's Italian manservant of many years in one costume, and we don't know who the other person is. Sargent has collected those costumes and schlepped them to the Alps along with his entourage. So there they are, dressed up as Persians playing chess in an Alpine meadow. There's something willful about it, as if he were saying, "I will paint gorgeous colors and textiles and fabrics and body language on my vacation."

Sounds kind of decadent for someone who was meant to be so standoffish.

It was probably relatively genteel. But when you saw them at the train station, you wouldn't expect to see them in a couple of days in harem pants -- or that Sargent would be in a suit with his sleeves rolled up, ordering people around. The official version is that he was repressed, but in fact he did have sensual experiences like that.